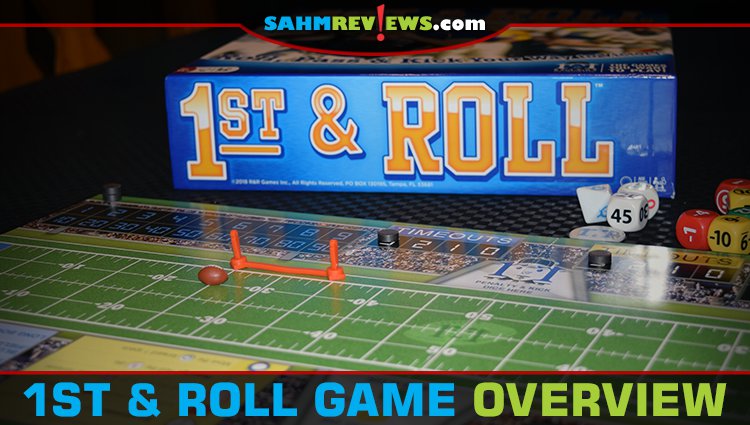 The end of summer means many things to different people. For school teachers it means they get to meet their classrooms of new students. For the students it signals the end of their summer vacation and time to hit the books. Some areas dread this time of year because it means hurricane season is upon us. Others welcome the break from the August heat with cooler nights. Whatever the reason, the transition from summer to fall is probably the most significant season change of them all.

And let us not forget the most important thing to happen at this time of year – football season begins! Around here we’ve already had two high school games, one of which was homecoming! The college season is underway as well. We’re not big into the NCAA, but do root for the Iowa Hawkeyes, especially after they began waving to the patients in the adjacent University of Iowa Stead Family Children’s Hospital. This will be the third season of what will hopefully be an eternal tradition.

This past weekend saw the first week of the NFL season get played (Go Bears!). We’ve long been fans of the game – rooting for the Cowboys on Thanksgiving day during the 70’s, celebrating the almost-perfect season of the Chicago Bears in 1985 and cherishing Tom Brady and the New England Patriots for finally taking the embarrassment off of the name “Brady” (stupid “The Brady Bunch” show…). To get ready for another championship year (either the Bears or the Patriots will be fine with me), we’ve been playing a new dice-rolling game by R&R Games called 1st & Roll! 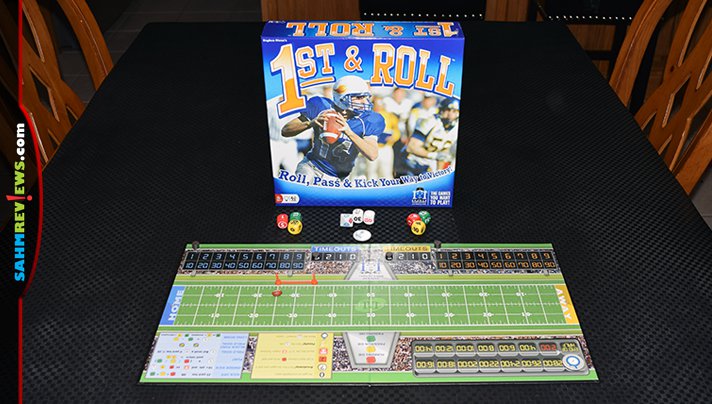 1st & Roll is the spiritual successor to R&R’s previous hit, 1st & Goal, another football-themed dice game where you get to call your own plays and can expand the game with division packs which contain new teams. This new scaled-down version is still complex enough for seasoned gamers while also being approachable for people who have never simulated a football game in board game form. 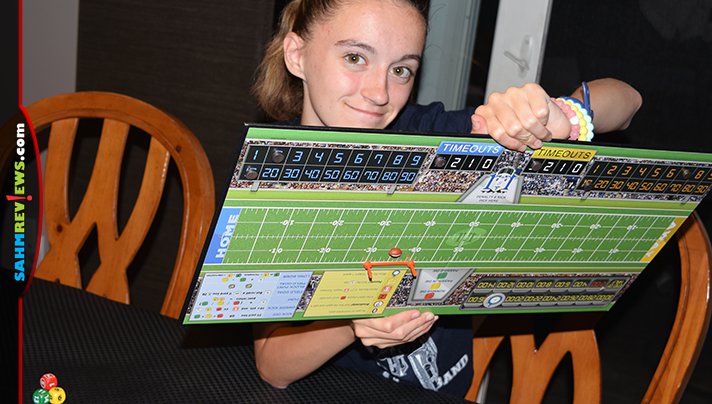 One of the main problems with any sports-type game is how easy it is to bump the board and jar all of the pieces. R&R Games has solved this problem by including a metal-core board and magnetized pieces! The custom football, first down flags and other markers all stick easily to the board, assuring a fair game. You’ll also find nine custom dice inside the box – three for offense, three for defense and three specialty dice.

If you’ve ever watched or participated in a game of football, then you already know the basics of how to play 1st & Roll. This game simulates nearly every part of a standard match! After deciding on who will kickoff first, the offense (receiving team) rolls all three of their dice and either runs the total yardage from the goal line or accepts placement of the ball at the 25 yard line (touchback). 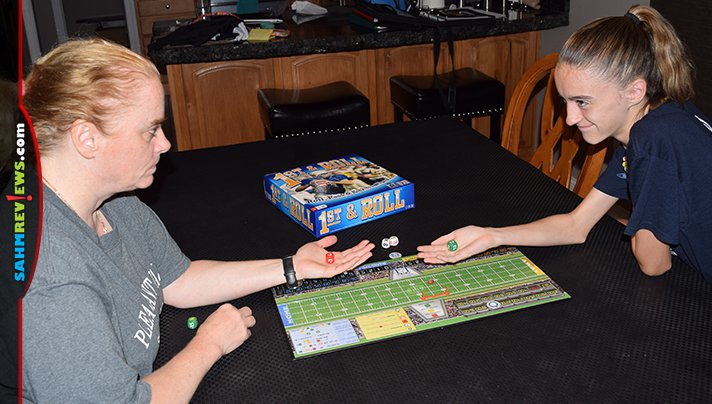 A typical play has both teams choosing one of their three dice secretly and revealing them at the same time. If they are the same color, both players roll (defense also rolls a clock die) and the ball is moved a distance equal to the difference between the two dice. If they were different colors, the offense has chosen a better play and only they will roll their color die and move forward, while the defense only rolls the clock die. The offense has four attempts at getting a first down by moving the ball 10 yards. Downs are smartly kept track of by the position of the ball on the board. Each successive down moves the ball down one row, with a first down returning the ball to the top of the field. 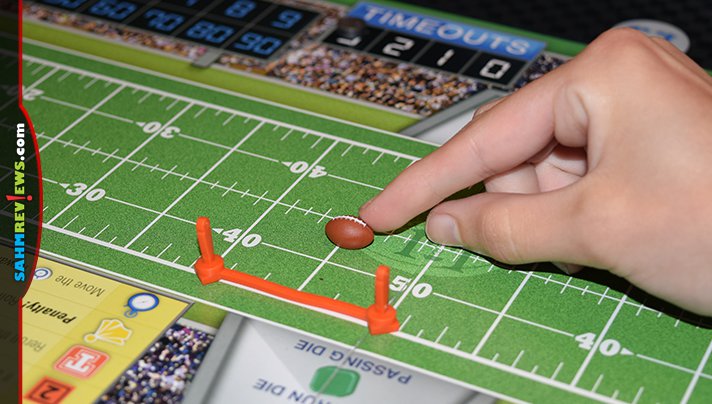 As in a regular game of football, there are rules for punting on the fourth down, regular or onside kicks after a score or period and instances of broken tackles and long bombs! The red zone has special rules for throwing too far or attempting a field goal, while the last play of a half may see a Hail Mary attempt! The entire game is governed by a clock which moves after running plays and by the result of the defensive roll of the clock die. 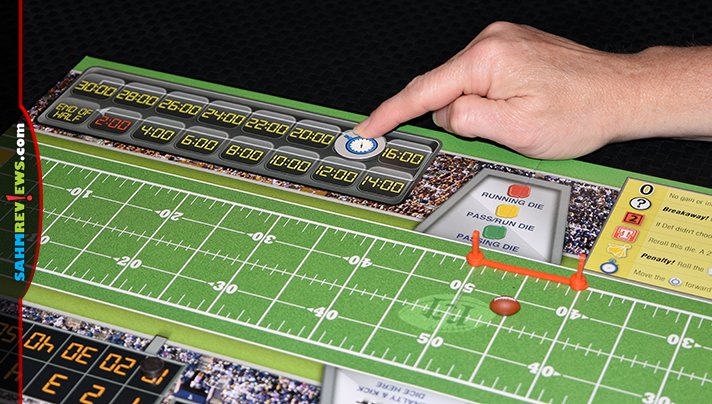 When the clock marker reaches the last space on the clock, the half ends immediately. Both sides also have a number of timeouts they may use to prevent the clock from moving forward. If it is the end of the 2nd half, the player with the highest score wins 1st & Roll! If tied, players may choose to play a sudden-death overtime! 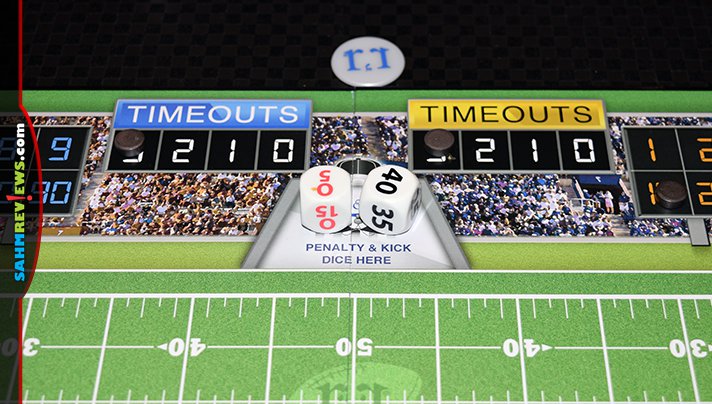 1st & Roll supports two players playing as opposing teams or four players working together in teams of two. In a four-player game, each person will take control of either the offense or defense of one team. Expect a full game to last around an hour, much less than a traditional broadcast of an NFL game. And while advertised for ages 14+, we feel that 1st & Roll could be easily enjoyed by players as young as 10. 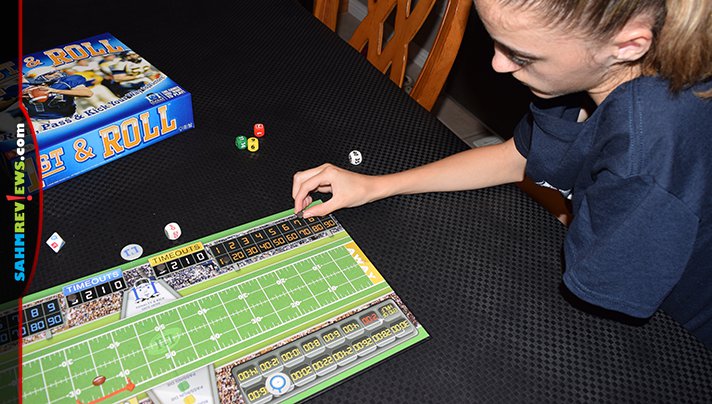 Brush up on your ball-handling skills by picking up a copy on Amazon, direct from R&R Games on their website or asking about it at your local game store! We know the folks at R&R Games are also Patriots fans, so head over to their Facebook or Twitter pages to either acknowledge their great taste in football teams or to give them some friendly ribbing!

Which NFL or NCAA team are you rooting for this year?