It seems there is a common practice of taking a successful game and applying a branded theme to it. Either to create a different game or just to customize it to appeal to a different audience subset. I’m sure you’re all familiar with the 100’s of different -opoly sets available. And who can forget the different variations of Trivial Pursuit!

Then there are times publishers take an existing game name and apply it to completely different game types in an attempt to capitalize on the goodwill of the classic title. We’ve highlighted a few of those over the years – Monopoly Dice, Showdown Yahtzee and Tripoly Dice come to mind. Recently we’ve come across a company, Sirlin Games, that is doing something a little different. And we think it’s great concept – create their own theme and then apply it to a number of different game types! 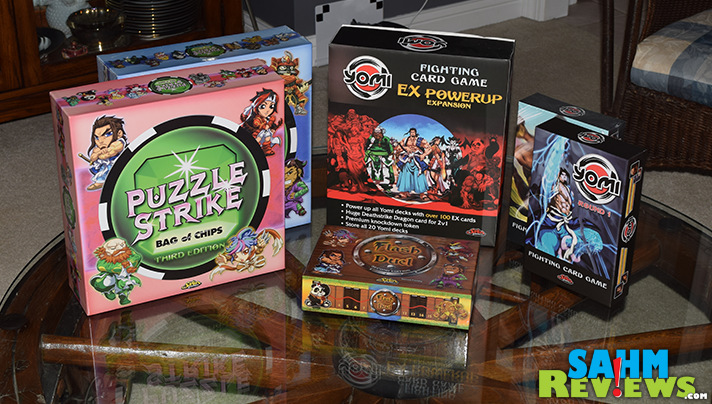 Sirlin Games was founded by David Sirlin in 2005 as he was working on game designs for other companies. A former top-level Street Fighter (the video game) player, he was turning his passion for playing games into a career. What he realized at an early stage that there was an inherent problem with any type of fighting game, whether digital or analog. Once you get to a certain level of skill, it became difficult to convince others to play when they knew you were much better than they were. He took this idea to heart and began working on a solution to this (and also attempting to eliminate the need to continually buy more packs to keep up with your opponents – as in Magic the Gathering). What eventually developed has evolved into an entire world of characters that spans a number of their game titles, all from what they refer to as the “Fantasy Strike” universe.

I too spent untold quarters in one of the original Street Fighter arcade games, so it comes as no surprise that Yomi is a very accurate representation of that type of game in card format. The term “Yomi” is Japanese and translates into “reading”, as in you want to read the mind of your opponent. Just as in the video-game version, this skill is key to winning. Predicting your opponent’s next move allows you to choose the optimum attack to counter or overcome their ability.

Unlike other card battle games, Yomi comes with everything you’ll need to play right in the box. No need for additional random packs to try and procure the elusive rare cards. Each character has its own preformed deck of cards and the base game includes four different characters to choose from. Interestingly, each set is also labeled as a standard poker deck (Hearts, Spades, etc.) and could be used as such. 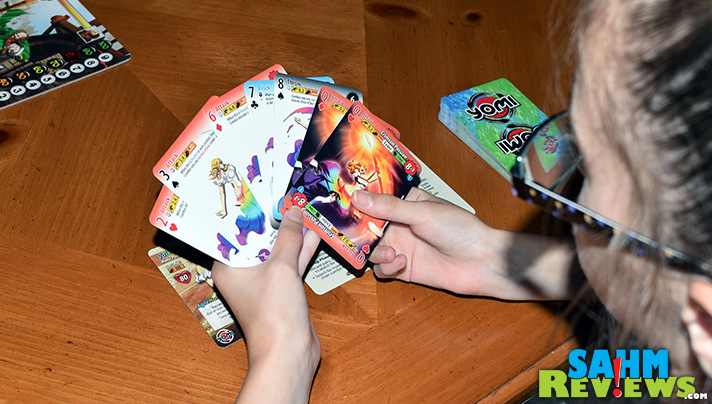 Once you’ve chosen your character, remove the character card from the deck and set it aside. The number inside the heart on the character card tells you how many hit points you begin with. Track your health with a pen and paper, a handy spin-down die or the included board and gems.

Each player starts with a hand of seven cards drawn from their own shuffled deck. Simultaneously both players draw a card (except for the first turn) and then play one card face down. Much like the classic game of War, both players reveal their cards at the same time and the combat winner is determined. Some card abilities cost other cards to be activated, so you must have those in your hand (and pay them) when your card is revealed. 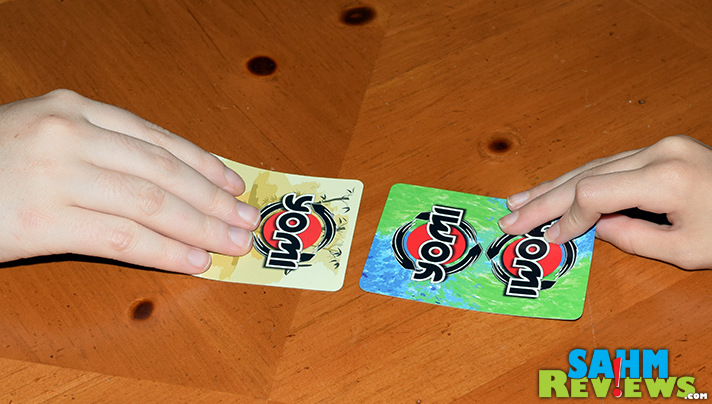 There are different types of attacks that overpower others in a rock-paper-scissors technique. This is where the aforementioned “Yomi” comes into play – reading your opponent’s mind will have you winning the battle every time! (Did I mention I’m horrible at rock-paper-scissors?!)

The real power comes when you successfully attack, you can continue your combo. If you remember combos from the video game it usually required a certain input sequence combination via the joystick and the buttons. In Yomi you play additional cards up to your individual combo limit. You also have to pay attention to the notation on the cards that label an ability as a “Starter” or “Ender” as they can only be used in a combo to open or close a combination attack.

I have to admit, of all the combat card games we’ve featured over the years on SahmReviews, Yomi is definitely the closest simulation of the classic fighting video game we’ve seen. It has seen enough popularity to host an annual tournament that crowns a worldwide champion! Get in on the action yourself by picking up Round 1 on Amazon for under $40. Once mastered, you can expand with Round 2 which includes four additional characters from the Fantasy Strike world and then the wonderfully-designed Power Up Expansion with bonus cards for each previously-available deck along with a box that holds all 20 characters! Of course you can start out smaller buy simply purchasing individual characters for less than $10 each!

One of the hottest categories of games over the past decade or so is what is termed “deck-building games”. Titles like Dominion, Star Realms and Eminent Domain have dominated this genre that has you drawing and spending cards in an attempt to build the most powerful deck of cards and ultimately either score enough points or destroying your opponent altogether.

Puzzle Strike is probably closest compared to Dominion in that many of the mechanics are similar. However, instead of using cards, Puzzle Strike cleverly uses round cardboard chips stored in an included bag. Each player begins with 10 chips in their bag (3 Character, 1 Crash Gem and six 1-gem chips). As with Yomi, the ten included characters come from the Fantasy Strike world.

On your turn you draw five of the chips from the bag and spend them to purchase one of the 10 items in the bank, granting additional powers and actions. An additional gem chip is taken from the bank and placed in the player’s “Gem Pile” which tracks the number of rounds. Once a player ends a turn with 10 gems in their pile, they automatically lose. Each game is different as only ten of the included 24 bank items are used each time. After you have made your purchase(s), all chips go to your discard pile. 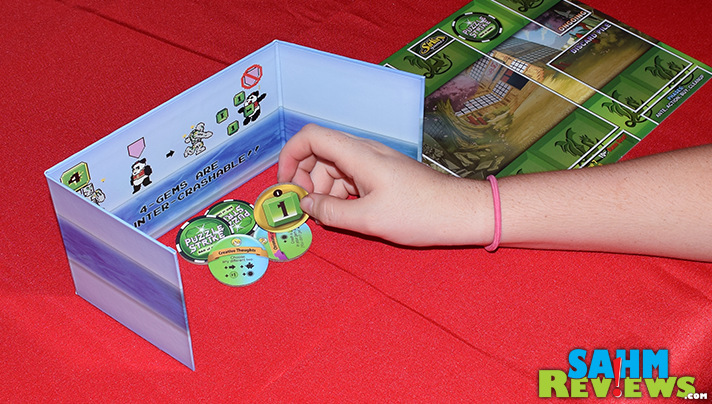 On each turn you draw five new chips to your hand to play with, and additional chips depending on how many gems are in your gem pile. As you can see, ‘some’ gems in your pile can be to your benefit, but having too many (10+) will lose the game for you. 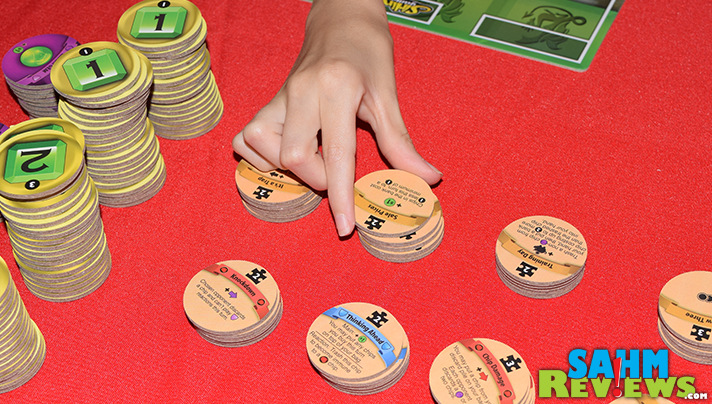 If you need to draw from the bag but do not have enough chips inside, simple take all of the chips from your discard pile, put them into the bag, shake and continue drawing until you reach your allowed hand size. 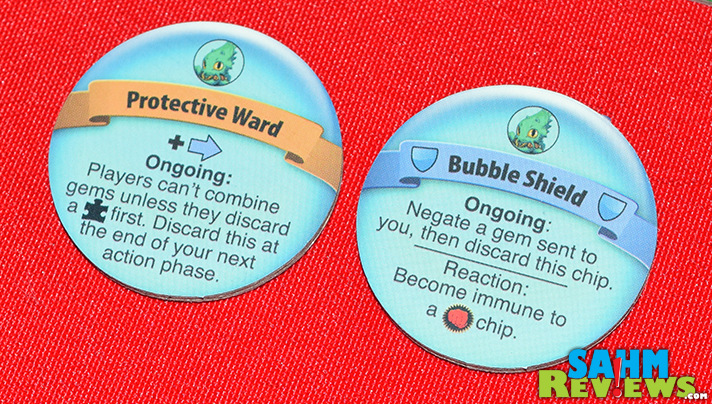 The game ends when one person has at least 10 gem chips in their pile at the end of their turn. Puzzle Strike supports up to four players, so the person with the lowest gem pile total wins. If tied, those players continue another round until there is a clear winner. 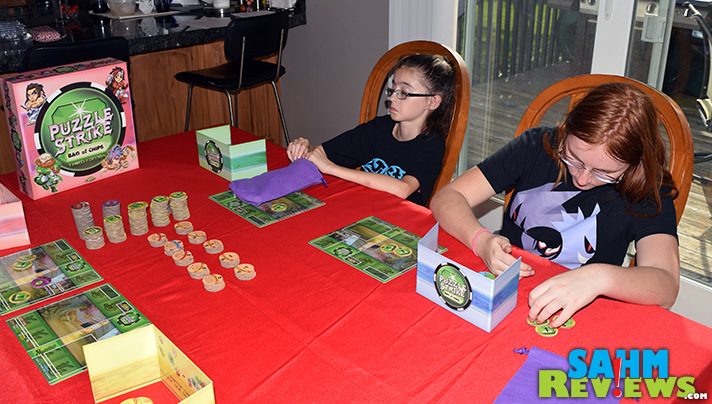 We were pleasantly surprised to have chips instead of cards in this “deck-building” game. I guess Sirlin Games has officially made the term invalid by using chips. “Hand-building” is probably more accurate at this point! The complete Puzzle Strike base game can be found for around $36 on Amazon, and the newly-issued “Shadows” version with 10 “Shadow” characters for just under $50.

Want to try before you buy? Puzzle Strike is also available on iOS!

What the other two games have in complexity, Flash Duel makes up for it with its simplicity. That doesn’t mean it isn’t any fun – quite the contrary. We found Flash Duel to be the easiest to set up and get to gaming and one that will make a great travel companion thanks to the included travel box. 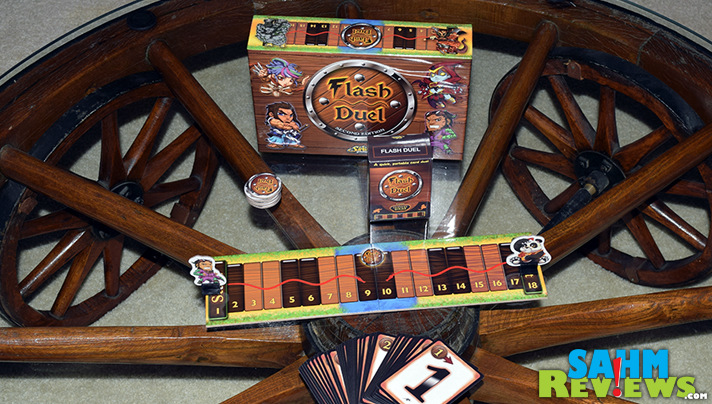 Flash Duel is best described as a push/pull game (like Crossfire) and is played a best 3 out of five rounds. You do not have to track hit points or health, each round is won by simply completing a successful attack on your opponent. But it isn’t as easy as you might think! Let’s take a look at the “Simple Mode” to see how it works. 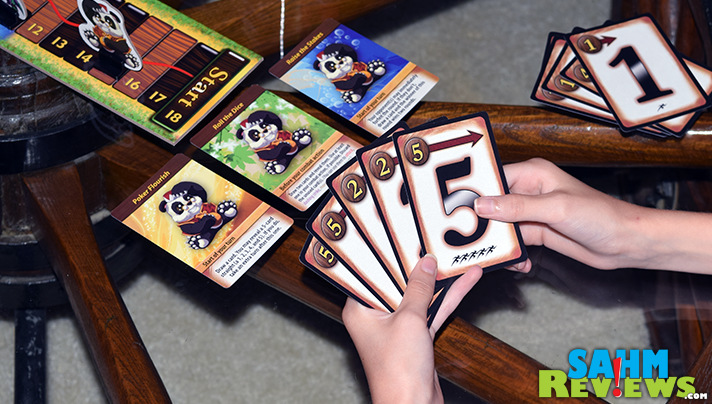 From the deck of 40 numbered cards, each player is dealt a hand of five. (The cards are numbered one through five and are equally distributed at 8 of each version.) Each player selects one of the 20 Fantasy Strike characters and places them on the start area of the board. 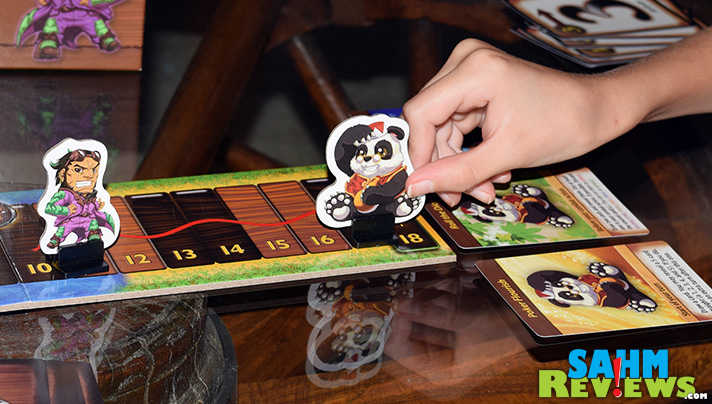 There are four possible actions you can take by playing one of your numbered cards. You can simply move your character forward or backwards the number of spaces dictated on the card. If you are in a space directly adjacent to your opponent (you can never pass them, you will always be in front of them), you may instead elect to “push” them backwards the number of spaces (you do not move). 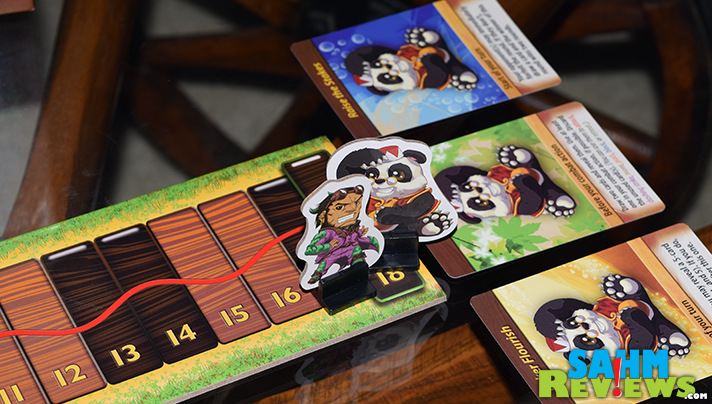 If you wish to try to attack your opponent, simply play a card with the same number as exact spaces you are away from them. You might also try a “Dashing Strike” which first has you moving forward the number of spaces on the first card you play and then follow up with a Strike by playing a second card with a number that exact matches the distance between you and your opponent (same as “Strike”). 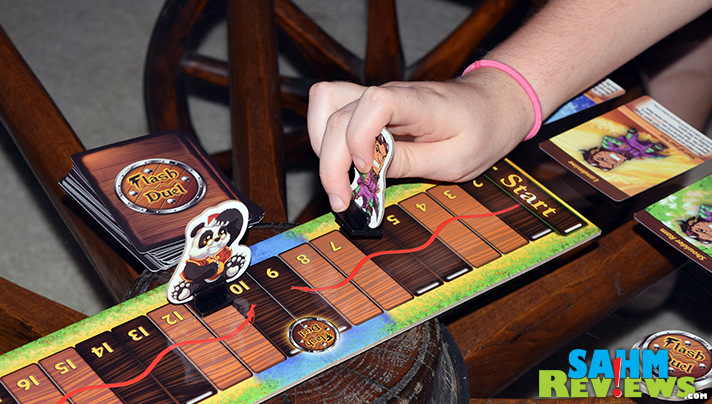 In either case when you Strike, you can also play additional matching cards (two 1’s for example) to swing twice. To survive a strike, your opponent must defend themselves by either playing the exact same numbered card (or cards in the case of multiple strikes) or retreat. By retreating, a card is played and their character is moved backwards that many spaces. They also lose their next turn to “recover” and only are allowed to draw up to their hand limit of five. After attacking, you also discard any played cards and draw back up to five. 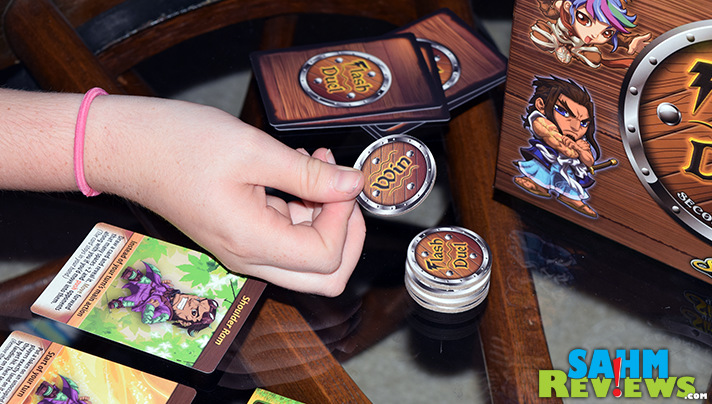 If your opponent cannot defend themselves or retreat because they’re already at the edge of the board, then that round is lost and you gain a win token. The first player to collect three tokens wins the game! 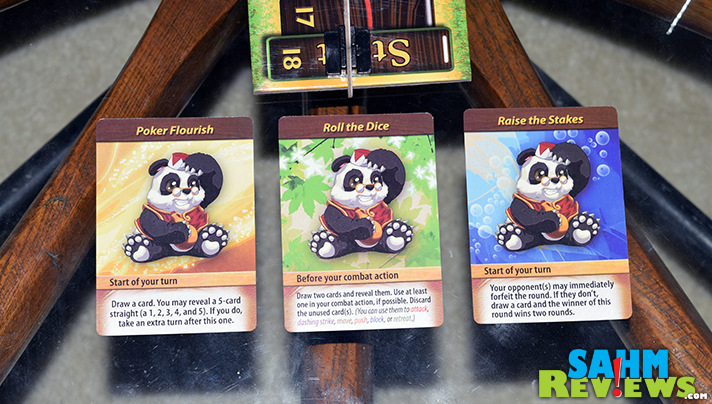 This simple mode is fun enough, but Flash Duel also includes additional rulesets for more complex games, including a version in which you create your own custom characters with twelve abilities from a selection of 60! You’ll also find a solitaire mode for those times you wish to practice on your own against an automated character or even an included “Boss”, the Deathstrike Dragon!

Like Yomi and Puzzle Strike, you can find Flash Duel on Amazon for under $40. There is also a Deluxe version that can still be found for only a few dollars more and includes wooden tokens (instead of cardboard)!

We were not previously aware of the Fantasy Strike universe and were very intrigued about the different game types utilizing the same characters. It was surprising to see how well each character’s personalities and abilities worked with the different game mechanics. (They worked well). We are excited to discover what’s next for our favorite fighters!

You can learn more about Sirlin Games by visiting their website and following them on Facebook and Twitter. We can’t wait to show you one in particular that uses high-quality poker chips and features the lovable panda from the Fantasy Strike world – probably one of the best game values out there today!

What classic arcade game would you like to see made into a board game?

15 thoughts on “One Theme, Three Games, Much Fun”