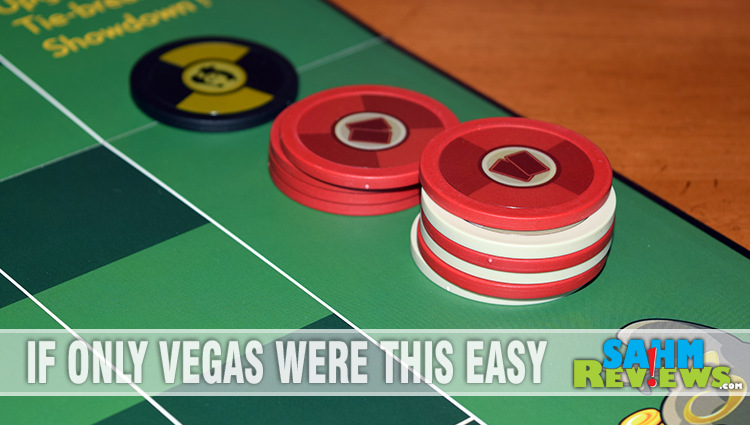 What Do Gambling Pandas Play? Pandante!

Over a decade ago when we lived in California, one of my clients was the Palms Casino in Las Vegas. We made their room key cards and being a loyal supplier, I would almost always stay at their facility when we spent a weekend in town. I got to know their marketing guru pretty well and he was regularly name-dropping all the famous clients he got to work with. Britney Spears was often the subject of conversation when we were chatting about pop stars and Hollywood celebrities.

On one visit he saw me walking past their restaurant where he was dining with a very tall man. He waved me over and insisted on introducing me to one of the hottest professional poker players of the time (I’m keeping the names to myself to protect their privacy). They were discussing a number of things, including having his recent book in their gift shop. After some brief chit-chat, I made way to the shop to purchase a copy and returned to have it autographed in person.

I’ve always been fascinated with poker, not because of the gambling aspect, but because of the nuance of bluffing to gain an advantage. My father taught my brother and I how to play the basic games when we were very young, sometimes with chips, other times with pennies, nickels and dimes. It wasn’t until the surge of popularity of professional poker on television did I realize just how much this dishonestly plays into the game!

You might recall a board game company we talked about in September, Sirlin Games. To refresh your memory, Sirlin Games created a whole world of characters that fought each other in head-to-head battles. They have been incorporated into both card and board games and range from samurai to hooded fighters, all in an anime style. And there’s the panda… 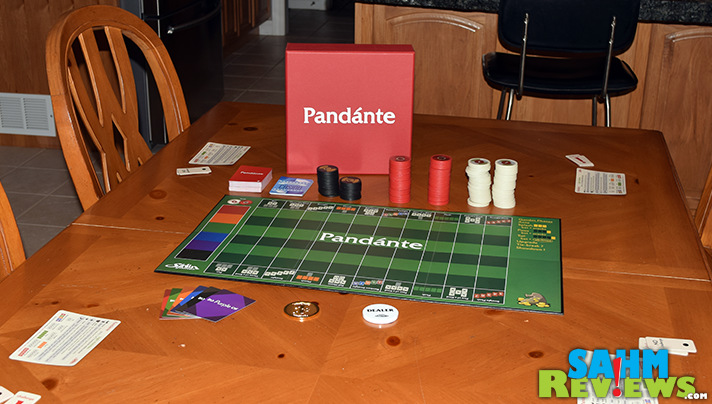 Even while playing Sirlin Games’ other titles, I found myself drawn to the panda and tried to select him before anyone else could. How happy am I to find they have a game based upon just this one character – Pandante! And it is poker-based too! Couldn’t ask for a much better marriage!

Somehow Sirlin Games has managed to take the popular card game of Hold ‘Em and nicely convert it into board game format suitable for all ages. As the story goes, Pandante is a gambling game played by the pandas of Pandalands where lying (bluffing) is encouraged and rewarded, as long as your untruth isn’t discovered. 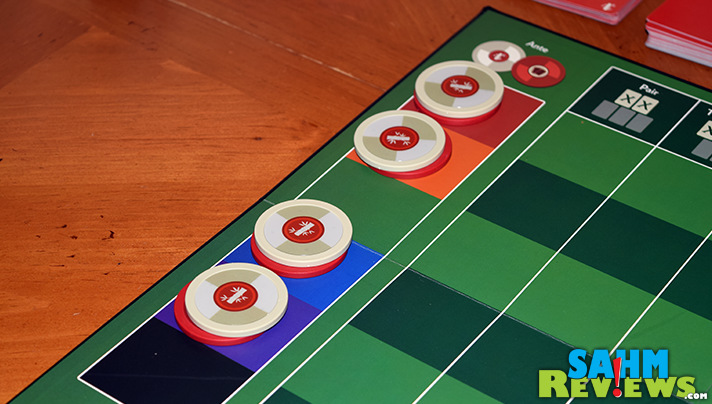 Each player begins the game with 20 gold, and will always be topped off at 20 at the beginning of each round by a Gold Fairy. This is to ensure even play and not to punish those who are new to the game. Pandante plays very similar to a standard game of Hold ‘Em, each player antes, is dealt two cards to their personal hands and three more are dealt to the community hand. From these cards you are trying to make a poker hand.  The standard three-of-a-kind, straight, full house and pair are represented, with the addition of a “Floosh” (four of the same suit), a rainbow straight using one each of the five colors of cards and a five-of-a-kind. 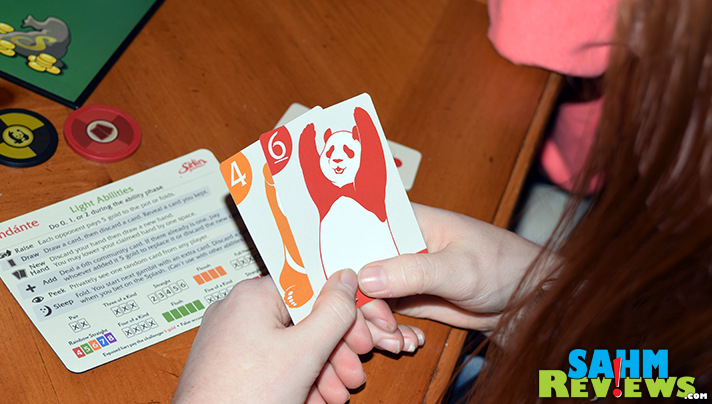 That’s where most similarities end, because at this point betting occurs, but in a completely different manner than what you see on television. Each round you have a choice: fold or bet 2 gold. Fold and all your coins on the board go into the pot for someone else to win. Bet, and you place your 2 gold on one of the corresponding spots on the board equal to the hand you are claiming to have or hope to achieve. 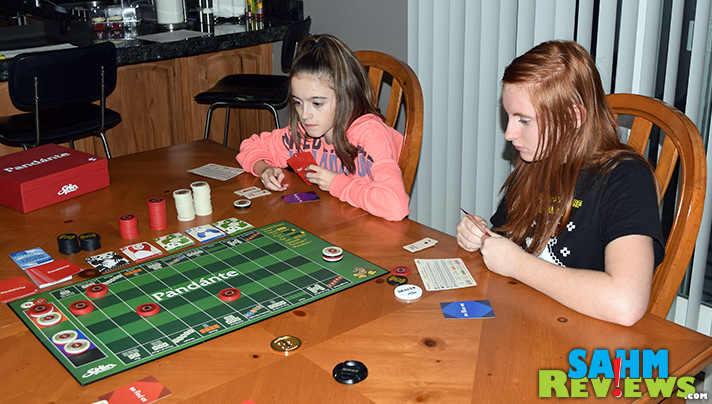 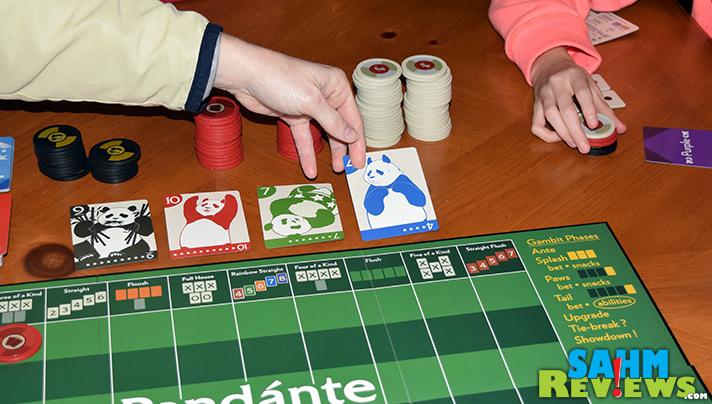 A fourth card is then added to the community hand, with betting and snack occurring again. The fifth round (known as the “river” in poker lingo) proceeds the same way, except there are no snacks. Instead, there is the opportunity to perform an ability or two, listed on the handy reference cards. 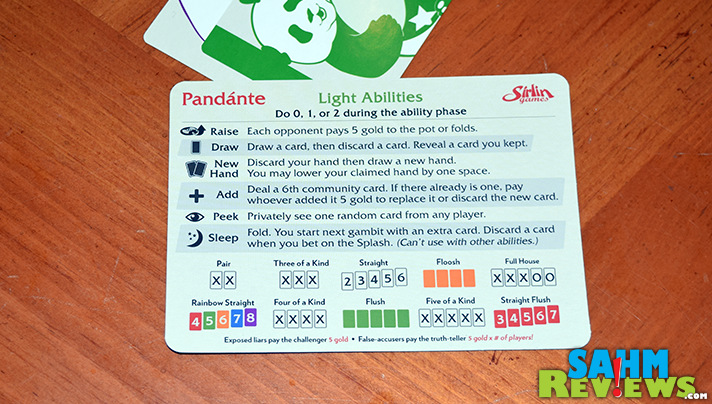 So who wins the pot? Pandante isn’t as simple as highest hand wins! Before hands are revealed, everyone gets a chance at challenging the player(s) with the highest claimed hand(s) on whether or not they’re bluffing (showdown round). If caught lying, the person holding the lying hand pays 5 gold to everyone that called them out correctly. If you call someone our incorrectly, pay them 5 gold TIMES the number of players in the game! Obviously, if you are challenging, you’d better be pretty sure of your accusation! 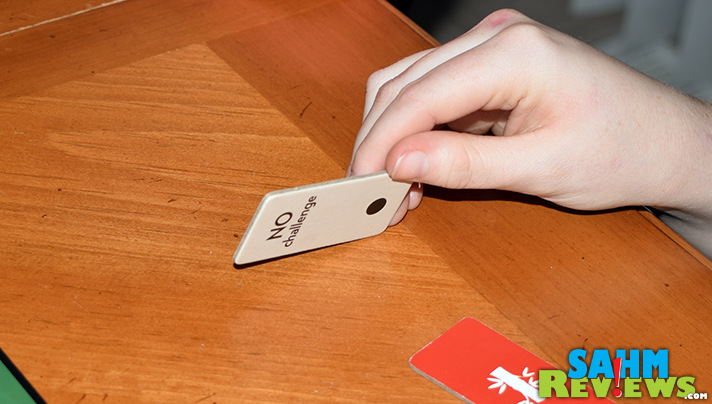 After any additional showdown rounds (if necessary) are completed, the player with the highest claimed hand wins the pot. If two players tie, the pot is split. Any more and no one wins the pot and it is left in place to be added to during the next round! To win Pandante, be the first player to reach a pre-determined amount of gold, established by the number of players. 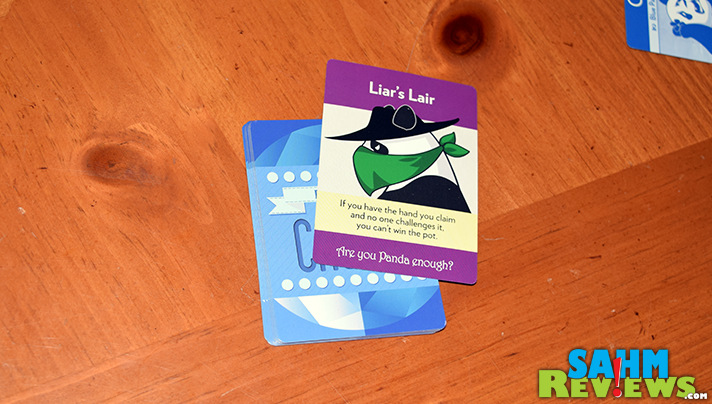 What makes Pandante more than just a variation of poker is the inclusion of optional expansions to the game. Each player can be dealt a character card, giving them unique abilities. There are also Casino cards which make each round’s rules different. The ability reference card may also be flipped over to the dark side, making Pandante more of a “gotcha” game than just a bluffing one. Lastly there are Diamond chips that are given to players at the beginning of the game, each one being allowed to be redeemed for a special action one time. Each one of these optional rules can be implemented individually or in any combination, making for a large number of game variations. And I haven’t even touched on the rules for playing with real money!

The copy of Pandante we have shown here is the Deluxe Version and includes casino-quality clay chips. It’s well worth the additional cost, but if you’re looking for something to fit a smaller budget, there is a regular version available for under $40 on Amazon.

We have heard of a brand new title out by Sirlin Games called Codex, so let them know you’d like to learn more about it on SahmReviews! In the meantime, watch their Facebook and Twitter timelines so you can be the first to know about other things in their pipeline!

At what age were you when you first learned to play poker?

4 comments on «What Do Gambling Pandas Play? Pandante!»