A few months back we explained how cool it was to see mass merchandisers finally grasping the significance of board games in today’s social settings. Until recently, if you wanted something other than the same games you played as a kid, you needed to go to a friendly neighborhood game store or purchase online. In the past year, we’ve noticed an uptick not just in what merchandisers like Walmart, Barnes & Noble, Walgreens and Target are carrying but also an increase in exclusives to many stores.

And when I say exclusive, I mean exactly that. The only place you can get some of these games is at one of these locations or their online counterpart. Walgreens recently picked up Munchkin Grimm Tidings as an exclusive, but Target by far has gone above and beyond the competition to pick up exclusive games. As an example, Wonder Forge has three new games that you can only purchase through Target: Stick Stack, Really Bad Art and Suspicion. 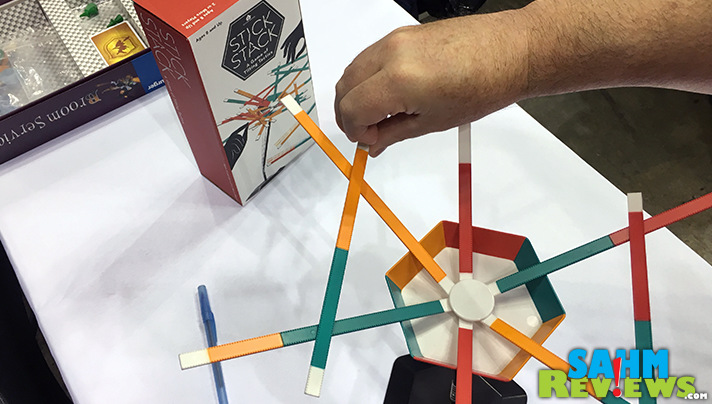 Remember playing Kerplunk when you were a kid? How about Don’t Spill the Beans? Stick Stack is best described as a combination of those games with a few added twists. Your goal is to get rid of all your sticks before your opponents. Easy, huh? 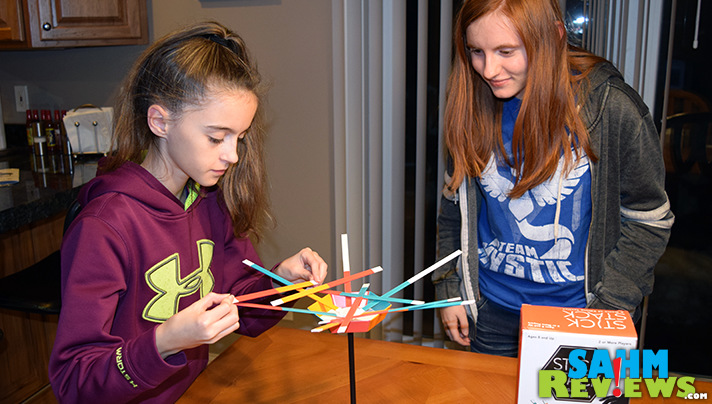 On each turn, you add one of your sticks to the unsteady tower. This isn’t just a matter of stacking and hoping it doesn’t fall. There are rules. Each stick is made up of a couple of colors and new sticks can only be added touching like colors. If you have a stick with orange and the only place to connect orange is hanging off the edge want to guess where you need to add that stick? 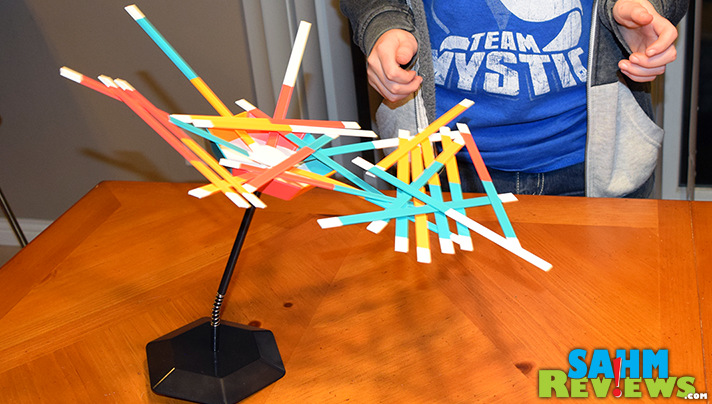 And no, it’s not as easy as it sounds. Like Wonky, there are penalties for messing up! Make a mistake and you have to collect everything that fell. To make matters even worse, the tower has an adjustable base that can be made more or less sturdy during game setup. It’s a simple game, quick to play, easy enough for younger kids and can accommodate any number of players. Bring a steady hand and a sense of humor as your opponents work to stick it to you. 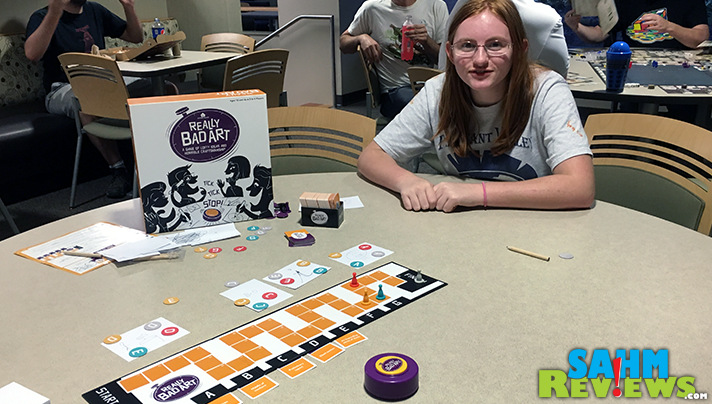 Drawing is not my strong suit. In my younger days, I did okay at games like Win, Lose or Draw and Pictionary as long as I could figure out creative ways to convey my idea without actually drawing a realistic image. I relied on being on a wavelength with my partners in hopes of figuring out shortcuts they could pick up on. I have been pretty happy that those types of games are no longer the hottest trend. When I was first invited to play Really Bad Art at Gen Con, I cringed. A drawing game? Ugh. Did I fall into a wormhole and end up in the late 80’s? I was pretty sure I was going to hate it.

I was wrong. This is like the best drawing game ever. Ever. Why do I make such a claim? Because it lives up to its name. The premise of the game is that everyone receives a card stating what they need to draw. Each card has two options – one easier (and I use that word loosely) and one more difficult. The timer is set and each player attempts to draw the picture before the buzzer sounds. Then, akin to Apples to Apples or Dixit, players determine what description goes with which drawing. 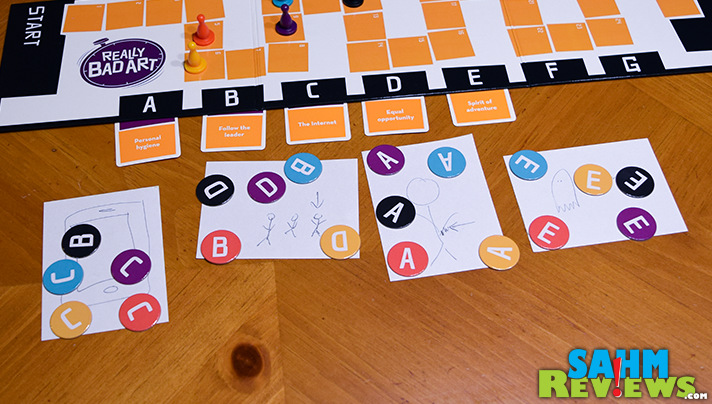 Here’s the catch. The buzzer is the key. Each player has exactly 6 seconds to draw. 6 seconds. Let me put it into perspective: It takes a couple seconds just to say supercalifragilisticexpialidocious. How much can you draw in the amount of time you can say that three times? Not much or at least not well. Even the best artists can’t draw much in six seconds. It’s some seriously bad art. REALLY bad art, just as the game self-professes. 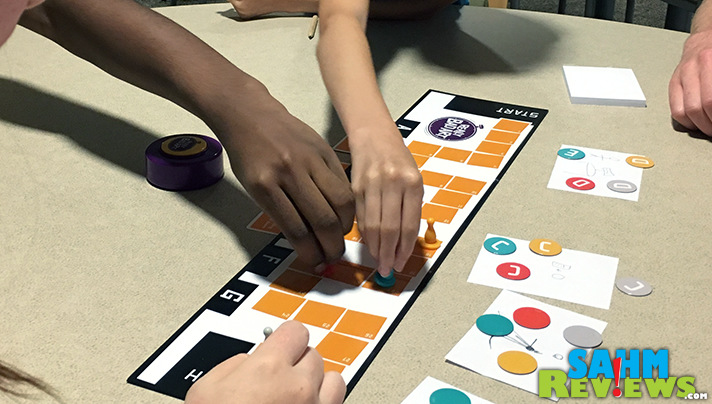 Score by guessing the correct drawing or having your drawing guessed correctly. The first person to cross the finish line wins. While the concept of the game is easy and kids who grasp the matching concept might be able to get it, the words on the cards are difficult and justify the ages 12 and up classification. Maybe Wonder Forge will expand the concept and offer cards for the younger gamers. So if you are like me and have an aversion to drawing games, buy this one. You’ll feel right at home with the other bad artists and may even find yourself with a win! 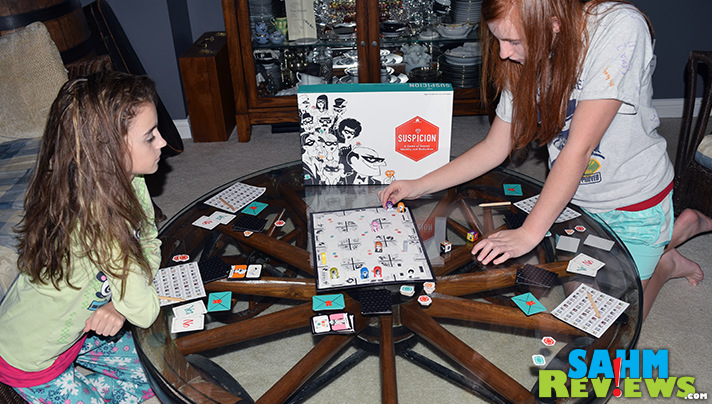 Have you ever participated in one of those murder-mystery, secret-identity dinner party type things? You know, where everyone gets a character then you spend the evening trying to figure out who among the other guests is the murderer. This is kind of a board game version of that or a murder-mystery version of Alchemists. In Suspicion, your goal is to steal gems while using deductive reasoning to figure out the identities of all your opponents.

At the beginning of each turn, the player rolls both dice then moves the pictured characters one space on the board. This randomness move helps mask your character’s identity because the dice roll limits who you are able to move. Following that, the player selects one of their activity cards and takes both actions displayed. Examples of such activities may involve moving an additional character, stealing a gem from a room or interrogating an opponent. Before moving on to the next player, everyone evaluates what happened, making notations on their individual cheat sheets. 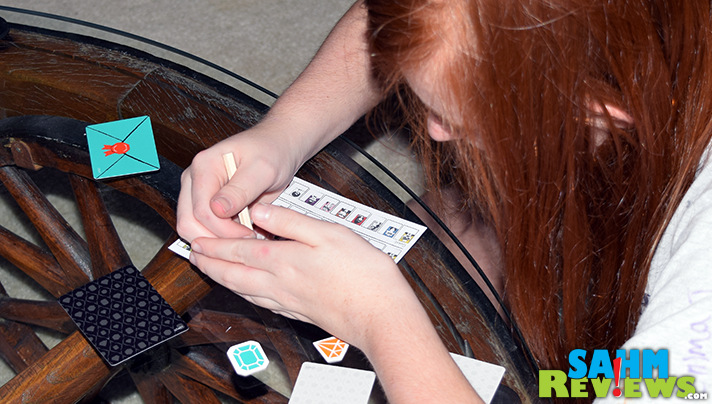 On every turn, information is attained and should be deciphered as much as possible. As an example, there are three different kinds of gems, but you can only steal from a type that is displayed in the room where your secret character is standing. So if you grab a diamond and none of the other characters are in a room with a diamond  then all the other players will be able to deduce your identity. On the flip side, maybe there are three or four characters standing in rooms with diamonds. Players will know you are one of those three or four identities but will need to utilize (or may have already utilized) clues to narrow down further which character you are.

Another activity involves interrogating an opponent. Players have the option of asking a yes or no question based on whether a player can be seen by another character (through the halls and doorways. This line-of-sight activity helps players decipher as well. Whether the interrogated player says yes or no, characters in sight (or not) can be marked off as not being possibilities for that player’s identity. Play continues one person at a time until one stack of gems has been depleted. Game play is halted and players tally who they think each character is. Points are earned for gem sets in addition to character deduction and the person with the most points wins. Suspicion is perfect for individuals who enjoy analytical games but may be tired of guessing Colonel Mustard in the Study with the Lead Pipe. It’s fun and a nice change of pace.

When Target opted to start carrying exclusive games, they obviously did some playtesting to make sure the games carrying their name have the qualities for being a good game! All three of these are solid and worth adding to your game collection.

You can learn more about Wonder Forge by visiting their website or following their scoop on Twitter and Facebook. Visit the toy aisle at Target to find these games or pick them up at Target.com.

Have you noticed the expanding game aisles at your local merchandisers?

17 thoughts on “Target is Solidly Part of the Renaissance”