I’m sure Nicole’s mentioned it before, but I’ll rehash it in case you’ve missed her comments. From a young age she has always has a fascination with jigsaw puzzles. Every year she would receive a couple at Christmas or on her birthday from her parents. Even after we met in 1990, she was still getting new ones every December and April even though she was well into adulthood. I think it was the gift she most looked forward to.

My history with puzzles is pretty typical. Our family would assemble one on occasion, usually during a holiday break. As my brother and I grew older, jigsaw puzzles fell by the wayside in favor of things like the Rubik’s Cube or board games. It wasn’t until I purchased a lot of games and puzzles at an auction some years ago did I become familiar with a puzzle fad from the 1960’s – round puzzles. 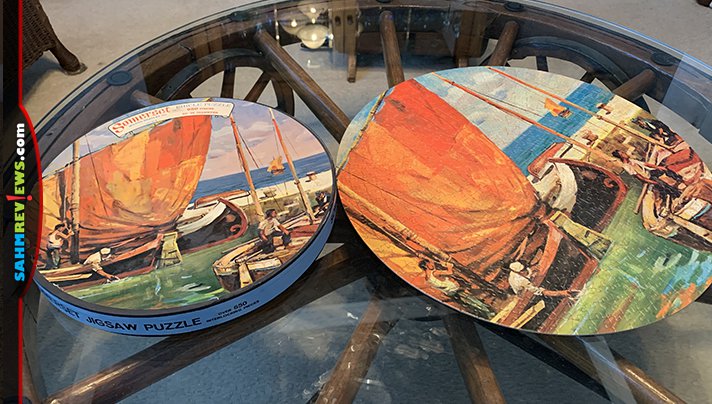 Jigsaw puzzles have been around since the late 1700’s and enjoyed huge popularity in the late 1800’s as mass production techniques brought the price down to a level every family could afford. Before these advances, jigsaw puzzles were considered toys of the rich. Now that all kids could experience the fun, manufacturers started introducing new features in the form of custom shapes and more advanced subjects that tricked your eyes when in pieces. This brought on an era of “puzzles for adults” that had many more pieces than the norm and images most kids would find boring. During the 1930s craze for puzzles, drugstores and circulating libraries added puzzle rentals to their offerings. They charged three to ten cents per day, depending on size. 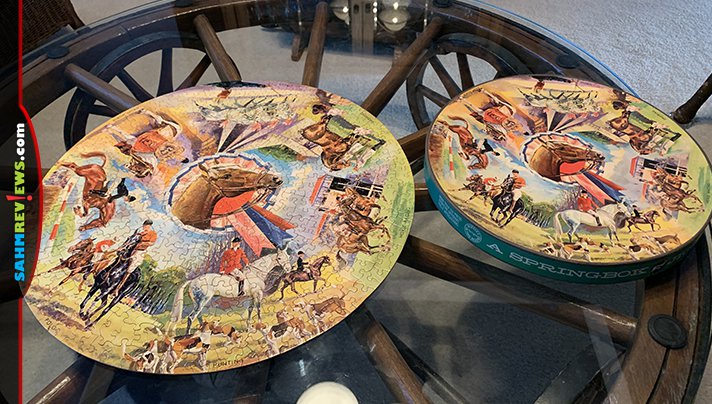 The autumn of 1932 brought a novel concept, the weekly jigsaw puzzle. The die-cut Jig of the Week retailed for 25 cents and appeared on the news stands every Wednesday. People rushed to buy them and to be the first among their friends to solve that week’s puzzle. There were dozens of weekly series including Picture Puzzle Weekly, B-Witching Weekly, Jiggers Weekly, and (featuring popular films) Movie Cut-Ups. After World War II, the wood jigsaw puzzle went into a decline. Rising wages pushed up costs substantially because wood puzzles took so much time to cut. And as prices rose, sales dropped. At the same time, improvements in lithography and die-cutting made the cardboard puzzles more attractive, especially when Springbok introduced high quality reproductions of fine art on jigsaws. In 1965 hundreds of thousands of Americans struggled to assemble Jackson Pollock’s Convergence, billed by Springbok as the world’s most difficult jigsaw puzzle. 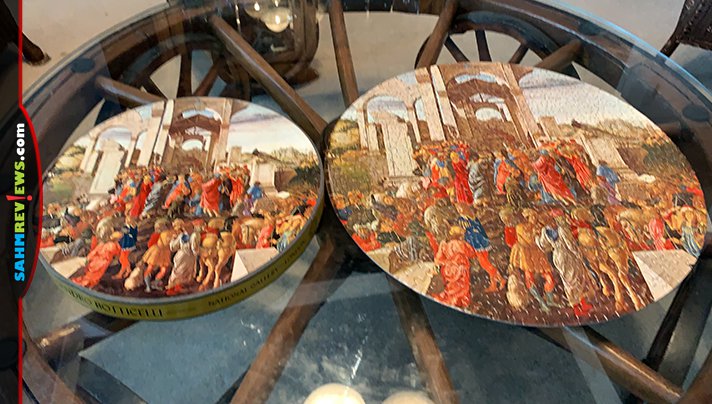 It was also around then that Springbok introduced their popular line of circular puzzles housed in a matching round box. Milton Bradley followed shortly thereafter with their own issues, but copying the box size and shape. Even though they don’t store on a shelf as efficiently as one in a standard rectangular container, these round puzzles were the most popular of their time. And this translates into many of them ending up at estate auctions and thrift stores for very affordable prices!

Every time I’ve seen one up for sale, I’ve made it a point of purchasing it for under $3. Puzzles are impossible to check for completeness, so any purchase is with a risk. In the past decade I’ve found over a half dozen of various subjects, all of which went onto a shelf for assembly at a later time. That later time is now, thanks to our self-imposed quarantine.

As a family we’ve assembled round puzzles of sports-related horses, famous artwork, a snack tray and religious scenes. Happily every single one of the round puzzles except for one was complete and in like-new condition. Because of their odd shape, a round puzzle is much more difficult than a standard puzzle, even if it has fewer pieces. And thanks to the one example we had that was missing two dozen pieces, we discovered that made it even more difficult!

I know many won’t purchase puzzles at thrift stores because they’re afraid they’re incomplete. Here’s my observation – puzzles that are designed for more advanced assemblers are much more likely to be intact than those made for children. Looks for brands like Ravensburger, MasterPieces or Springbok and stay away from ones with 300 pieces or less or based upon the movie-of-the-month. At a couple bucks each at thrift, even if 50% of the puzzles you buy are bad, you’re still money ahead of the $20+ price typically seen on more advanced examples brand new!

15 thoughts on “Thrift Treasure: Round Puzzles”