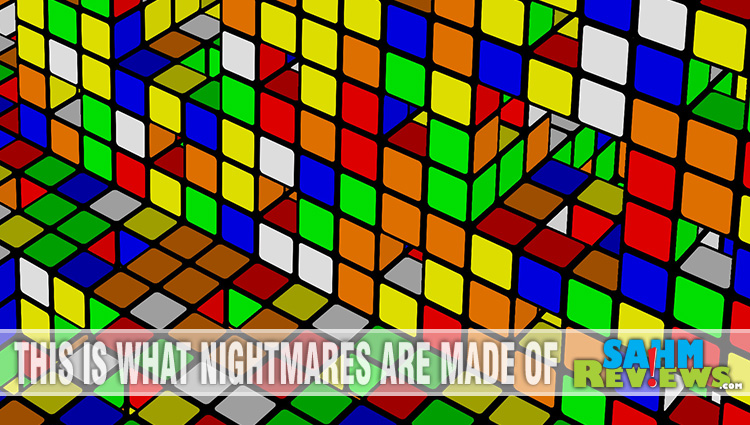 Keep Them Busy Past New Year’s

You have exactly 5 days left until Christmas. Panicking yet? Take a breath and realize that means you can still order something from Amazon in the next day or two and get it in time to put under the tree.

But let’s take a step back in time. Do you remember the late 70’s? One of the biggest fads was the introduction of the Rubik’s Cube. Originally invented in 1974, it became the must-have toy for kids of all ages. Atari who?

Since then there have been dozens upon dozens of additional 3D puzzles developed, each harder than the previous. But nothing endures like the original 3x3x3 that we all grew up with. We recently introduced our daughters to one of our old cubes and they took to it right away. We don’t have a savant that can solve it in under a minute on our hands, and after a while they wanted help with it. I have to admit, it’s been years (decades?) since I’ve solved one from scratch, but thanks to the internet we can learn patterns and techniques to solve the cube with relative ease.

And here’s a little bit of trivia for you. Did you know that the Rubik’s Cube was inducted into the Toy Hall of Fame this year? It takes its rightful place next to other signature toys like Barbie, Scrabble and Play-Doh.

That brings me back to today, only 5 days left, remember? I want you to consider introducing a family member to this classic pastime. For us it has become a bond between generations, a chance to show the kids that Mom and Dad still know a few things, even if we have to cheat a little and look up the directions. The official Rubik’s Cube line is now offered by Winning Moves USA. We’ve previously told you about their innovative Splash Cards as well as some of their classic game titles, and they definitely have you covered with about every permutation of Rubik’s puzzle you’d ever need. 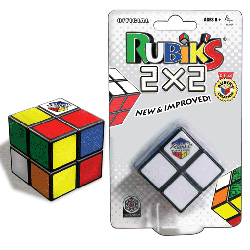 Get them started with this 2×2 version, which was actually invented first! Many of the techniques you use to solve this cube will translate directly into solving the 3×3 version. 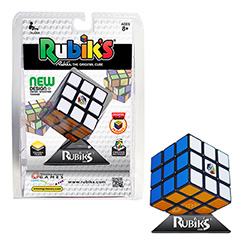 The world’s most famous puzzle is the still the best selling puzzle of all time! And now – it is made from molded plastic so there are NO MORE STICKERS! No stickers means no cheating! Includes collectable stand.

This Rubik’s Cube is bigger, better and more mind-boggling. Building on the classic 3×3” cube, this large model is 4×4” and requires some fun new twists and turns. Includes instruction booklet. 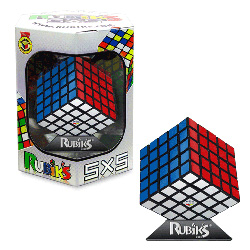 This is the absolute ultimate in the world of Rubik’s Puzzles and a must-have for all fans. Everybody loves the 3 x 3 and the 4 x 4, so it only makes sense that they answer the call with the Rubik’s 5 x 5! 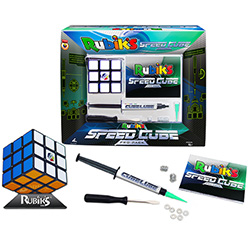 The Rubik’s Speed Cube has an all new mechanism with faster movement, amazing corner cutting and zero pops. Basing it around a brand new spherical enclosed core design ensures that there is minimum friction between internal moving parts. This revolutionary new design allows not only for faster turning parts but also balances fantastic corner cutting with no pop technology. 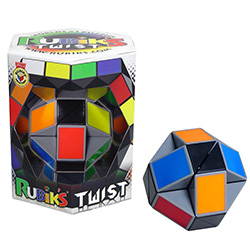 Rubik’s Twist® is the twist-able challenge of unlimited puzzle shapes. Start twisting and watch amazing figures take form. Turn a snake into a swan… a bat into a ball… a turtle into a terrier, all with just a few twists of your imagination.

The Rubik’s Void is a “hole” new puzzle with a “hole” new challenge – but – something’s missing? The Void is amazing to see, to touch and to play!

See, I told you that Winning Moves has you covered! Whether you need a beginner’s cube in the 2×2, or a real stumper with the 5×5, there’s not a single person on your list you won’t find one for. Be sure to also check out the other great product lines from Winning Moves on their website and give them a follow on Facebook and Twitter to see what’s coming next! You only have 370 shopping days until next Christmas!

47 comments on «Keep Them Busy Past New Year’s»