Ever since I learned how to solve my first cube back in the early 80’s, I have been a fan of the entire line of Rubik’s Cubes. Just because I can’t solve them all doesn’t mean I can’t appreciate their complexity – both in solving and manufacturing. But until we came across Rubik’s Race at our local Goodwill, the only way we knew to compare abilities was to time how long it took to complete a cube. That isn’t the case any longer. 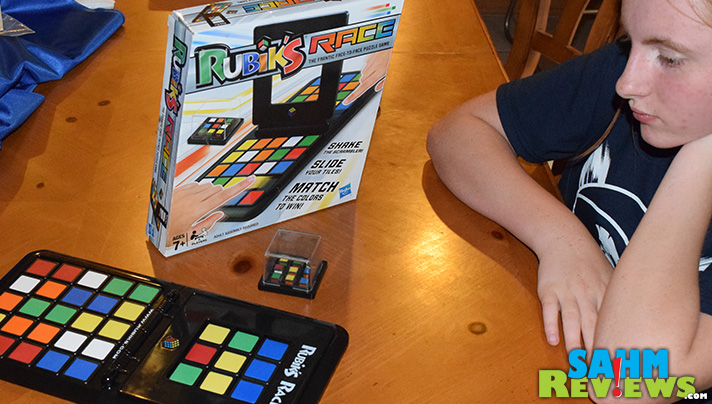 Rubik’s Race is a competition between two players to slide their colored squares until they match a randomly-shaken 3×3 grid of colors. Each player is working on the same design, albeit they are upside-down to each other.

One person shakes the included box to create the game’s solution and then each player is off to the races to complete it first. When you think you have it, slam down the center divider to frame off your answer and compare it to verify your win.

As you can see from the above video, speed isn’t your only ally – great spatial recognition as well as superior puzzle solving ability is needed to come out on top. Our oldest got off to a quick start and continued to move the tiles quickly, only to see her patient younger sister claim the win. 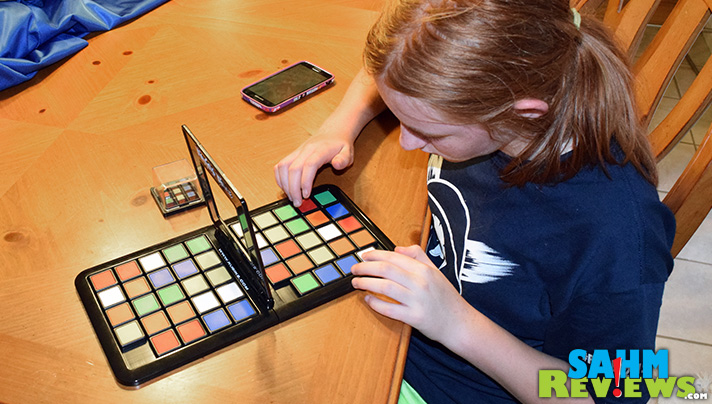 Rubik’s Race also disassembles into a easy-to-travel size and sets up in just a minute or two. Because of the quickness of the game, it is easy to get a half-dozen rounds completed in under 10 minutes. Perfect for a party of larger group where everyone wants to get a turn.

You can still find the game on Amazon and eBay, but there is now even a version for the iPhone or iPad! This might be a better solution as you never have to worry about lost pieces or broken plastic. However, nothing beats the tactile feeling of having the actual game in your hands. Either way, this is a game that will definitely remain in our long-term collection.