I often direct people to our list of ideas for family bonding and talk about spending quality time together. As someone who tries to find the positive in situations, I’ve been thrilled that the 10+ week quarantine has provided families with the opportunity to engage and that’s great. Some do crafts together. Others exercise or play games. For many, home-cooked dinners with the entire family are a new novelty. As the mom of two kids who have been busy with extracurricular activities since they were little, I know the impact that lessons, practices and rehearsals can have on a schedule. For us, family bonding is often around the table whether joining together for dinner, game night or to assemble a puzzle. However, as many people have found comfort in having the time to enjoy a sit-down meal at the table, I have to confess that it feels like we’ve done that LESS during the stay-at-home orders. Don’t get me wrong, it isn’t that we aren’t having home-cooked meals or eating together… it’s the “at the table” part that we’ve struggled with. You’ll often find us eating at the breakfast bar or plopped in front of the television streaming movies or TV shows while we eat. The dinner table, however, has been the landscape for one of the many board games we’ve featured here or puzzles we’ve assembled during this lock down.

Ravensburger recently sent us their “One Dot at a Time” puzzle, but I haven’t been able to get it featured. Not because it’s taking a long time to put together, but because I haven’t even tried. Our kitchen table has been otherwise occupied and our wagon-wheel table lacks the workspace to put together this size of project. But then something happened. My friends, Wes and Mary, shared a picture on Facebook displaying the progress on their latest jigsaw puzzle. It’s been fun to see the variety they’ve been working on, but this time was different. I vaguely recall it being a sea of gold, but I don’t remember much about the puzzle itself. I was too entranced by the puzzle-shaped sorting trays in their photo. I’ve been putting together puzzles my entire life and have never felt the urge to purchase accessories… until now. 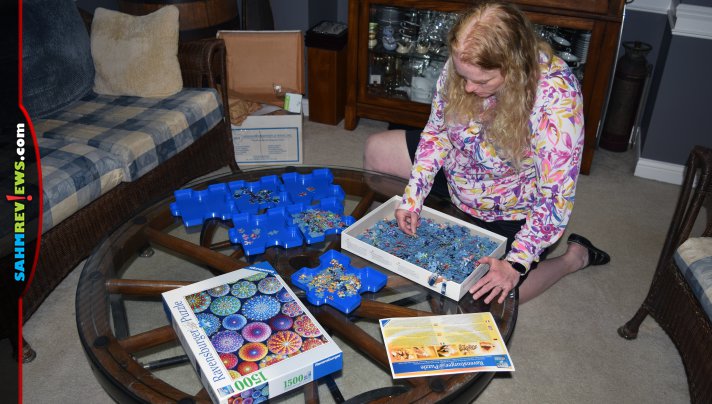 How have I not had these in my life before? My favorite way to assemble puzzles is to work out of the box, grabbing colors that catch my eye. You might find me working on multiple different parts at a time as something new draws my attention. Eventually it all comes together is a soothing kind of way. But using something to sort those colors? Never thought about it. 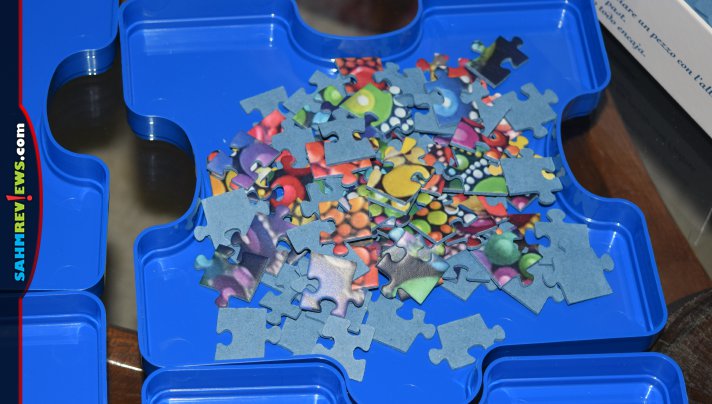 As I’ve said in prior articles, I leave the edges to my family members. This time it was no different. Well, it WAS a little different. I didn’t completely ignore the edges like I normally do. When I first opened the box this time, I sorted by color while simultaneously adding all the edges to one bin. The girls are still participating in distance learning so they haven’t been able to work on the puzzle when I do. I loved being able to conveniently set aside the edges for them to use when they were ready. 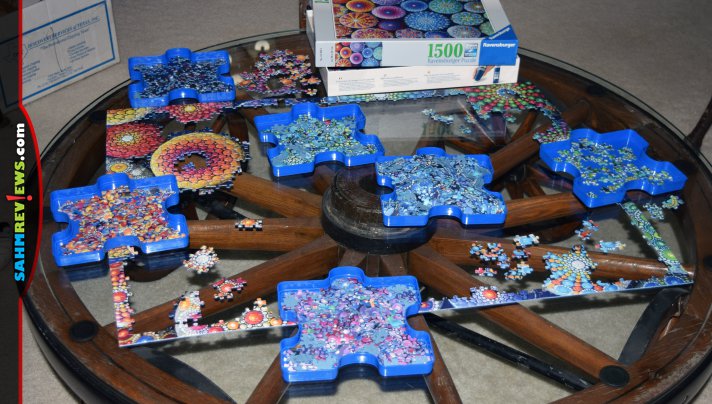 Aside from the ability to work on sections by color, these trays have given me the opportunity to utilize the smaller, round table in our sitting room. It’s a room that’s seldom used anyhow so having a puzzle on the table wouldn’t be an inconvenience. That’s where we put together all our vintage round puzzles, but I’ve never tried to tackle a large one there. Now I can! 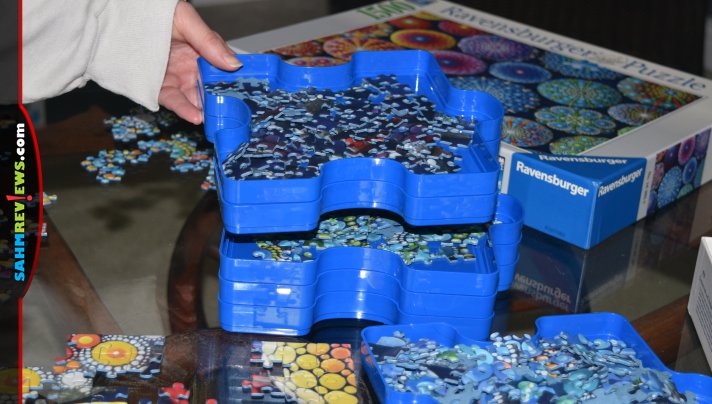 After seeing the sorting trays and discovering how convenient they are, I’m starting to look at other puzzle accessories like Ravensburger’s Stow-and-Go mat. I used to think about getting a puzzle mat, but was never compelled to look into them in detail. Worrying that it would tarnish the experience, I always talked myself out of it. If I had something like this, in combination with the stackable sorting trays, I could have been working on the kitchen table all along. When it was time to eat or play a game, all I would need to do is roll up the mat, stack the bins then move it out of the way.

While Ravensburger’s marketing team has provided us with puzzles (and Ravensbuger games), I want to make it clear that these sorting trays are something we purchased on our own. I absolutely fell in love with them the minute I saw them and had Scott purchase a set on Amazon within hours of that. The only problem I had was deciding between these and the Mickey Mouse shaped trays! These won out because they look like a lot like meeples! After using them for under an hour I realized that I’ve been missing out all these years. I decided to share because I’m sure I’m not the only old-school puzzle fanatic who has failed to discover all the cool items on the market. Now I need to excuse myself so I go research other jigsaw puzzle accessories!