Have you ever wanted something just because you thought it was really cool and you were sure you were going to use it? I’m like that with kitchen gadgets. I have a total weakness for them even though I do less than my fair share of cooking.

Sometimes it’s fun to have for those few times when you know you’ll actually use it. How often do we use our Sous Vide machine? Not often, but the results are to die for when we do. (And by we, I clearly mean Scott.) But it’s not just kitchen stuff that falls into this “really want even though we don’t know how often we’ll use it” category. Seriously… gaming systems? Who has time for that? When we want to play though, it’s there… ready and waiting. We have an action camera for that exact reason. We only use it a couple times a year when we travel but the results are well worth the expense we paid. The carpet vacuum? Yes. Sushi maker. OMG I’m so glad we have THAT! Gas torch? Yup, that too. Heck, even this year I could add the snow blower to that list. We’ve used it all of once. 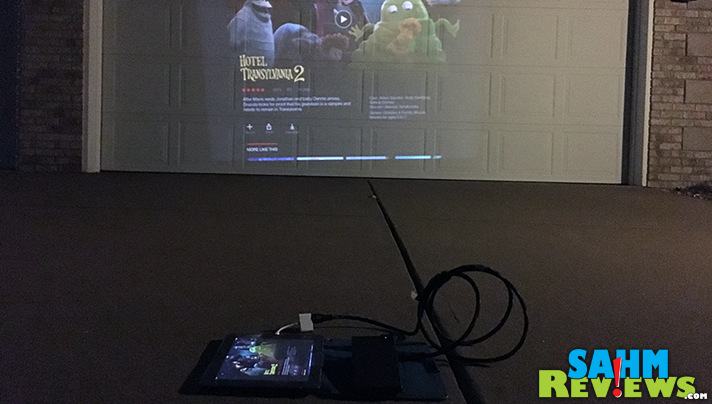 Then there are some things that you’re positive you’ll use as intended only to realize that you were further from the mark than you thought. That’s where the Sony Pico mobile projector lands. When the weather warms up, no doubt we’ll invite the neighbors over for a cookout then project movies on the side of the house or garage door. But that isn’t happening until Mother Nature stops threatening us with snow. I was certain in the meantime this would be the coolest gadget for our own private movie screening inside the house. But to be honest, that’s not what happened. What I discovered, however, is that it has an immense amount of value outside my home as well as inside. Here are a few unexpected uses: 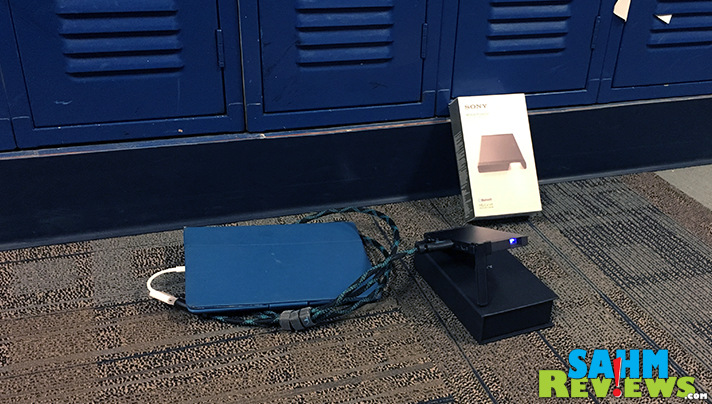 Watching Movies On the Go

Let’s admit it. Sometime we end up stuck somewhere with nothing to do. We used to have a ton of down time at swim meets and between call time and performance time at symphony events. There have even been times during travel that we’ve stayed at hotels and haven’t been able to find anything interesting on their limited channel selection. We often pack travel-friendly games but having the option to watch a movie on the wall (or ceiling) is an awesome option. Not just for occupying the kids, but also for entertaining the rest of us who are “stuck” with time to kill. I recently set up my Sony MP-CL1A Pico mobile projector and projected it on a wall while waiting for my daughter to finish her music lesson. The mobile projector is not much bigger than a cell phone and is smaller than a mini tablet so it doesn’t take up much space in a purse or backpack. 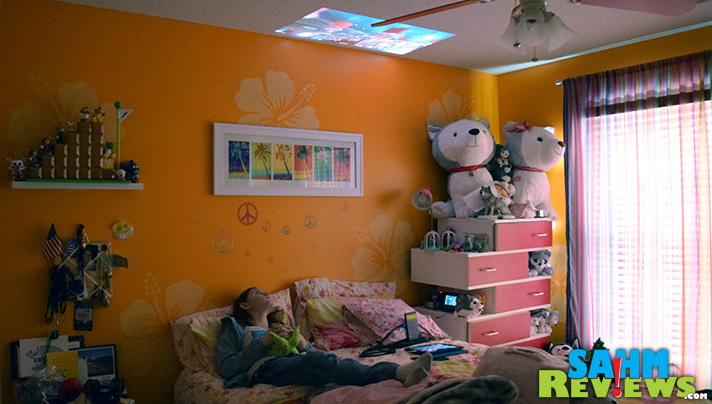 Talking Your Teen Out of a Television

When your kids ask if they can have a television in their room, you can compromise and agree to let them watch videos, stream TV or movies on their bedroom wall or ceiling instead. Madison keeps telling us that she wants a television in her room but I’m not ready to micro-manage what time she would be using the TV. It’s easier to agree to let the kids use the projector since all electronics have to be returned to the base in the family room each evening. We know they won’t be staying up late watching something when they shouldn’t be.

With such a portable projector, the possibilities are extensive. As an example, we regularly tell you about the multitude of games we play during our weekly game meet-up. Often there will be a new game coming to the table where it takes longer to explain how to play than it does to actually play. There have been many times that people have been asked to watch a video before coming to game night so we can be up and running quicker once we are all together but sometimes that isn’t possible. Other times we find a new game once we’ve arrived and unless we can find someone who has already played it, reading the directions can be too much of a time commitment. Our Sony MP-CL1A Pico projector tethered to my phone allows our group to stream some instructional YouTube videos… WAY better use of time than each of us reading all the instructions.

I showed the Sony MP-CL1A projector to one of my daughter’s teachers and she couldn’t believe how small and portable it is. This unit is perfect for teachers to do slide presentations on their whiteboards straight from their computers. Hooking it up is as easy as attaching an HDMI cable, hitting the power button and selecting the source. 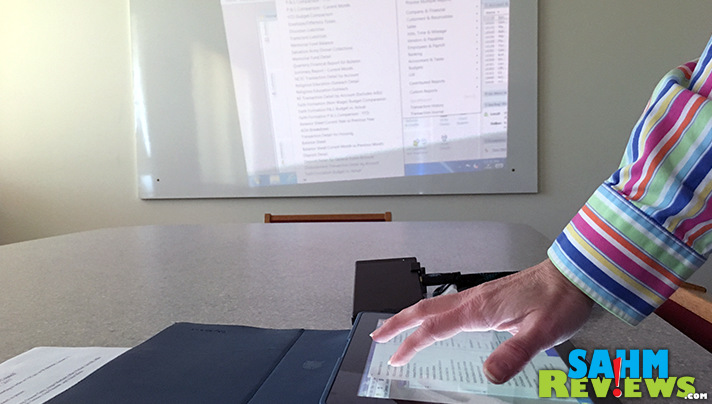 It was then I realized the way this projector was truly going to make me happy. In my pre-mom life, I was an accountant. When we moved back to Iowa I took a part time job at the church were Scott and I were married and the girls were both baptized. I’m only there a couple days a month but quarterly I’m tasked with presenting the financial statements to the parish Finance Council. Over the years I’ve found ways to streamline the process to make things run more efficient. One example is that I bring my iPad and utilize Splashtop to connect to my desktop and load the financial statements. As the council members peruse the printed documents, I’m able to look up the details on the fly and answer any questions they might have. It reduces the amount of time I have to excuse myself from the conference room to return to my desk to look something up and allows the conversations to flow more readily. The Sony MP-CL1A Pico mobile projector has solved yet another problem relating to this same situation. For each meeting, I’ve had to allocate at least an hour to print, copy and collate identical sets of four different multi-page reports to disburse to each of the council members. It sounds trivial but aside from the timesink, I cringe at the waste of paper that gets shredded upon completion of the meeting. Now I’m able to connect the projector to my iPad (running Splashtop) and load the reports on the screen so everyone can follow along at the same time. If someone has a question, I’m able to do as always and drill down for details but now they are be able to follow along as I do so.

Oh, the magic of technology. This was another reminder that we should look beyond the obvious use of any of our gadgets. Just like our shortcut for making easy clean-up Mason jar milkshakes, we are only limited by our imagination.

Whether you need a projector to stream a movie or show in an unconventional place or use it to lead a presentation or teach a class, having one that is lightweight and easy to tote around is the way to go. You can pick up a Sony MP-CL1A Pico projector on Amazon for around $360. Be sure to pick up an HDMI cable and Apple lightning digital AV adapter if you plan to use it with an Apple device. Find out what other cool gadgets Sony has by checking out what they are broadcasting on Facebook and Twitter.

What unconventional way would you use a Sony Pico projector?