With most puzzle and logic games now appearing exclusively on mobile devices, it sure it refreshing to find a brain-teaser of the analog type. We’ve featured games by ThinkFun in the past that have mainly targeted the younger crowd, but their take on the classic Shell Game will definitely challenge both young and old.

Much like an app, the game comes with a number of puzzles of increasing difficulty meant to slowly teach you how to play and how to win. Your goal is to move your colored crabs from their starting location to match the color pattern shown at the bottom of your page. There’s a catch though, you can only swap along the predefined paths. Oh yeah, one more trick, your crabs are covered under seashells so you can’t see where they are. Think you can figure it out be weight? No luck, rocks inhabit the non-crab seashells, so you are truly swapping them blindly.

But this is a game that is best shown not in photos, but in video. We’ve put together a brief play-through of two of the beginner puzzles so you can get an idea of what is required and exactly how difficult it can be!

If you watched the video through until the end, you’ll have seen by the second puzzle that keeping track of four colors is quite difficult, even if it was marked as “beginner”. The more challenging versions use up to six colored crabs and have a very restrictive swap pattern. I gave up after 20 minutes of just trying one of them, nowhere near solving it. Frustrating? Yes. Challenging? Yes. Will I try it again until I finish it? YES!

A good solution if you’re tired of the kids having their noses buried in a tablet playing the latest kill-the-gem game. Even though it is advertised as a single-player game, we found that team play was a great option and helped when we had each person keep track of a color instead of one person trying to remember them all.

You can find Shell Game on Amazon for under $20 or directly from ThinkFun on their website. Be sure to check out their Facebook page to keep up with what they’re working on next! 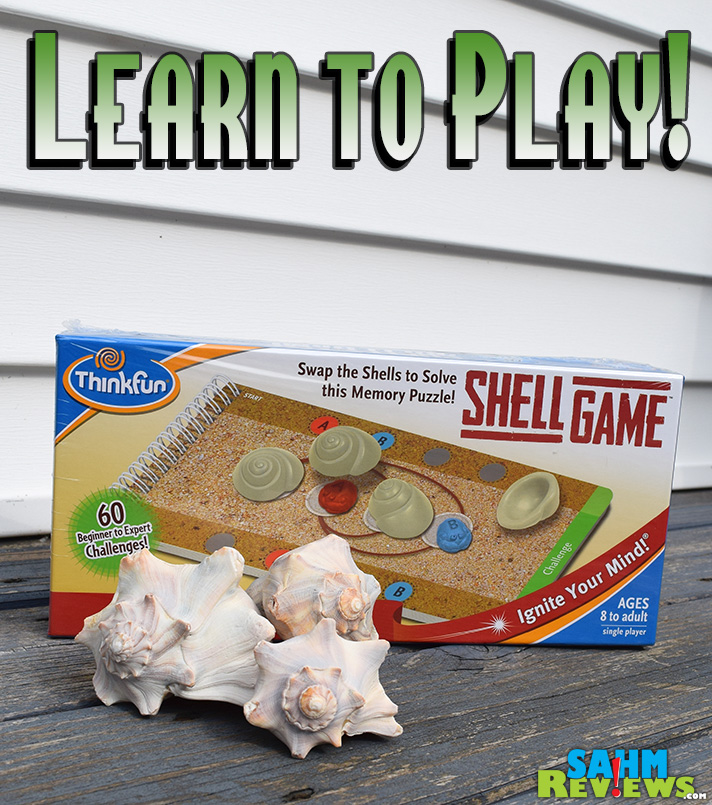 24 thoughts on “Move Over Three-Card Monty”