Home / Recreation / Games / See, Gravity CAN Be Our Friend! 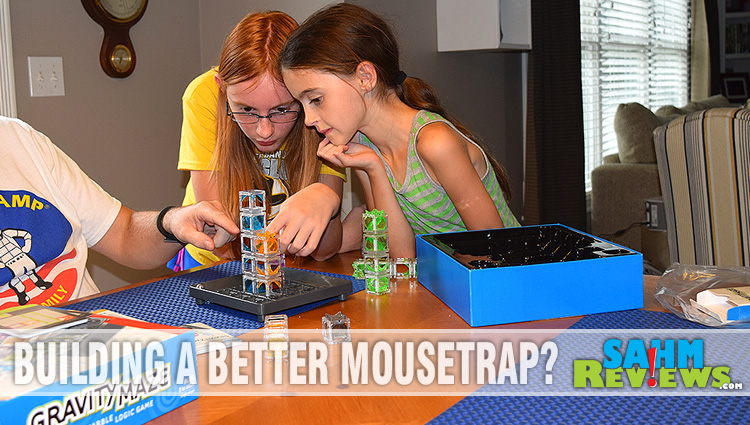 See, Gravity CAN Be Our Friend!

I think I’ve discovered a new genre of game that I really like. I guess you could call it the single-player-board-game. Or maybe a single-player-puzzle-game. Either way, you get the point – it is for one player only. My first exposure to this type of puzzle game was Shell Game by ThinkFun. That one was a twist on the old Three Card Monty gambling game that had you figuring out how to move shells with specially-colored balls underneath them to match the ‘puzzle’ printed in the included booklet. The ever-increasing difficulty of the layouts made this a game that I go back to time and again trying to eventually complete them all (no, I haven’t yet…).

Along these same lines, ThinkFun has introduced another brand new single-player puzzler called Gravity Maze. This one is very different than Shell Game thanks to the inclusion of an entire additional dimension! Your goal is to use the included pieces to build a structure that, once you place your metal ball in the top, allows the ball to travel to the end piece in one continuous path. And while advertised as a single-player game, we quickly found that because it was 3D, it lent itself very well to teamwork! 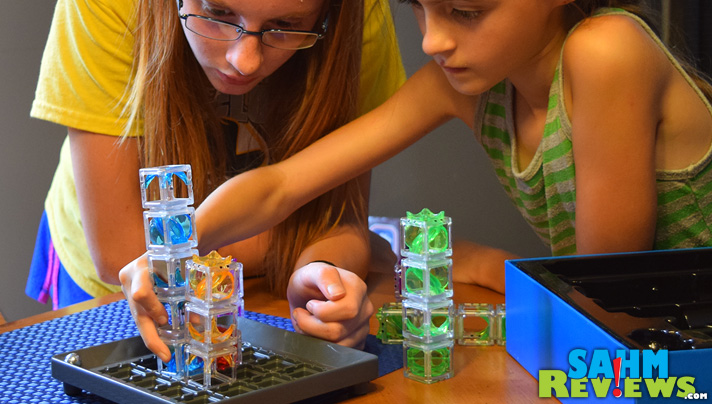 Also like Shell Game, Gravity Maze includes a set of ‘puzzles’ ranging in difficulty from Beginner to Advanced that dictate your starting positions and the pieces that are to be used to solve the puzzle. That’s it, the rest is up to you to figure out. But in case that isn’t confusing enough for you, check out these two quick videos covering a Beginner and Intermediate puzzle that better demonstrates how the game is played.

Looks quite fun, doesn’t it? This game is VERY well made – we pushed and pulled on the plastic towers and were not able to break a single one. ThinkFun also was kind enough to include three of the metal balls since they know that’s the first thing we’ll all lose.

You can find Gravity Maze at your local retailers, via ThinkFun’s website and on Amazon for just under $30. Considering the number and quality of pieces in this game, I’d consider it a great value.

And one lucky reader of SahmReviews.com will win a copy for themselves! Just enter below using the handy-dandy entry form and be sure to share the contest on social media for extra entries. Good luck!

50 comments on «See, Gravity CAN Be Our Friend!»