I have an admission to make. I goofed. A couple years ago I purchased a couple different sets of Electronic Snap Circuits from Amazon as Christmas gifts from Santa for our girls. My intentions were good: both of our daughters had shown a propensity for science, having participated in the First LEGO League as well as enjoying a number of science and engineering camps. I myself hardly remember anything about Ohm’s Law and barely manage to not electrocute myself changing light bulbs.

Don’t get me wrong, the sets were well-made and did exactly what was advertised. The parts were sturdy and safe and each box came with instructions to make all kinds of things: doorbells, radios and more. But here’s the kicker. They told you how to do it! All you had to do is follow simple instructions and violà, it was complete. There wasn’t really any deep or critical thinking needed to create it, nor a real understanding of how it worked. Needless to say, after an afternoon of building 3-4 items it has been collecting dust on the shelf ever since. 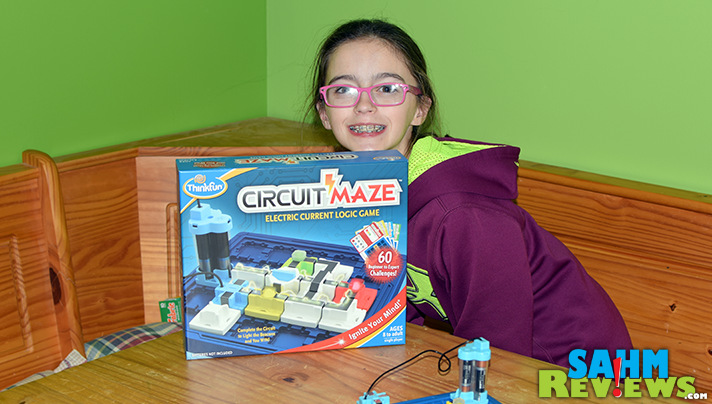 If you’re a regular reader of SahmReviews, you know we’re big fans of ThinkFun‘s puzzle-oriented games that have increasingly difficult challenges. We’ve been learning the basics of computer code with Code Master, creating 3D mazes in Gravity Maze and brushing up on our basic logic skills by playing the Shell Game. Now they’ve taken the same puzzle premise and some AAA batteries and introduced Circuit Maze for our budding electrical engineers. 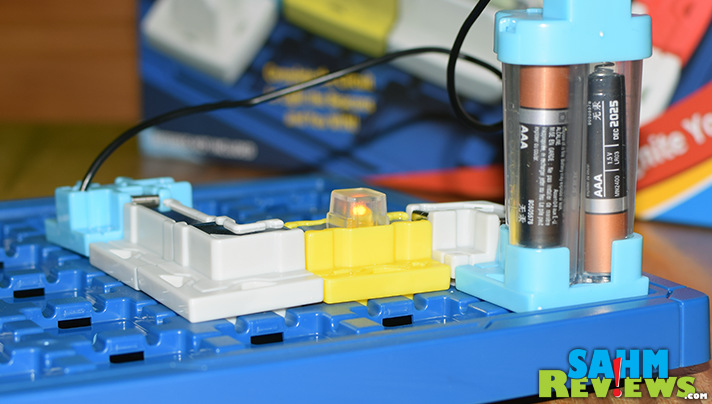 Rather than making radios, in Circuit Maze we’re simply lighting up various LEDs. Included in the box are three of these in different colors, twelve pathways, a 3-way switch and the power source (batteries not included). 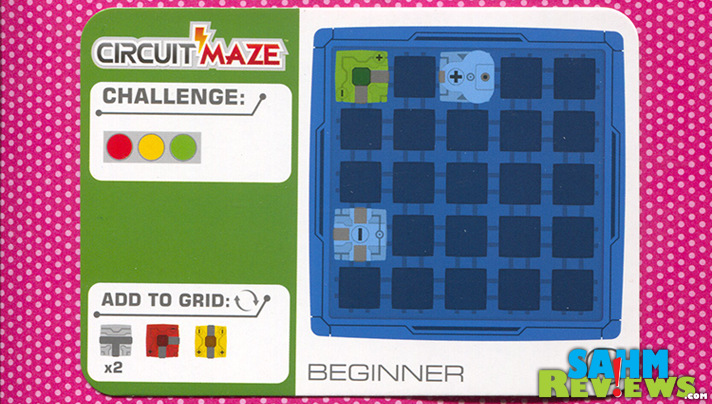 Working from a deck of 60 challenge cards, you are trying to complete the puzzle depicted by only using the listed components and matching any pre-placed grid pieces shown on the card. In the above example, the power source (start token) and it’s attached piece (end token) are already placed on the grid along with the green LED. 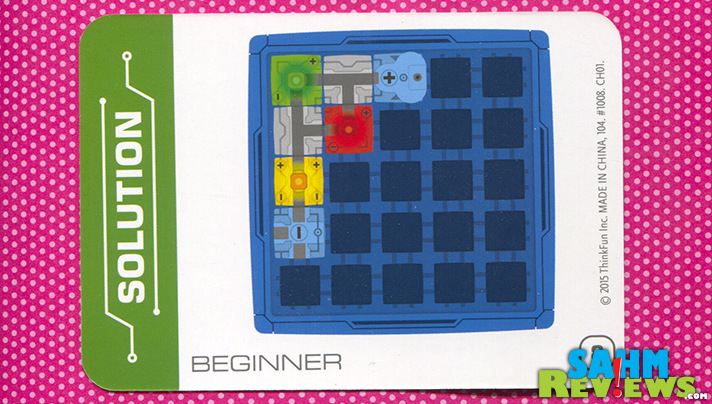 Your challenge is to light up all three LEDs by adding the red and yellow beacons and two T-shaped pathways without moving any of the starting pieces and NOT creating a short circuit. There is only one possible solution, and thankfully it is printed on the back of the challenge card.

Circuit Maze is more than just putting the blocks in order, this is electricity! Polarity comes into play (think of it as the flow direction). Put an LED in backwards and it won’t light. Forget to close a path, again – failure. 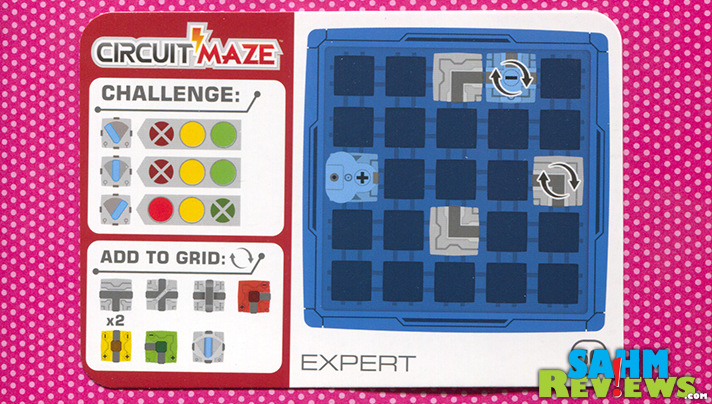 And lest you think that was too easy, take a look at this sample from the Expert level. For this example both pieces of the power supply are pre-placed as well as three of the pathways. You might notice two of them have circular arrows on them. This simply means that you are allowed to rotate them to their correct positions, but they must still remain in the same spot on the grid. 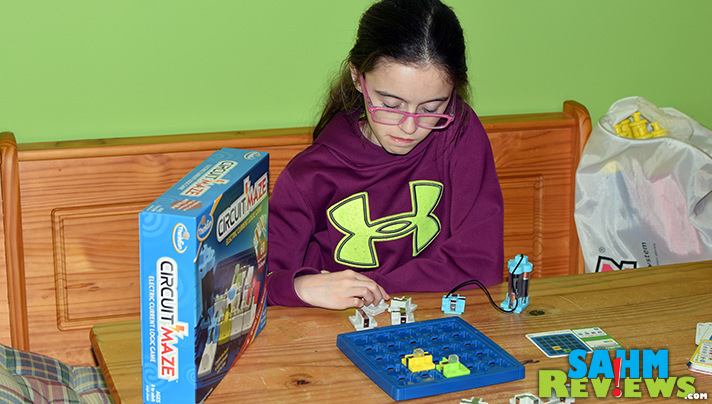 Your challenge is three-fold thanks to the inclusion of the 3-way switch. When the switch is in the leftmost position, the red light should be off, while the other two are lit. Same for when the switch is moved to the center position. When it is moved to the rightmost spot however, the green light should turn off, the yellow remains on while the red is finally lit! Sorry, not showing you the answer to this one (mostly because I haven’t solved it yet myself). You’ll need to get your own copy to find out! 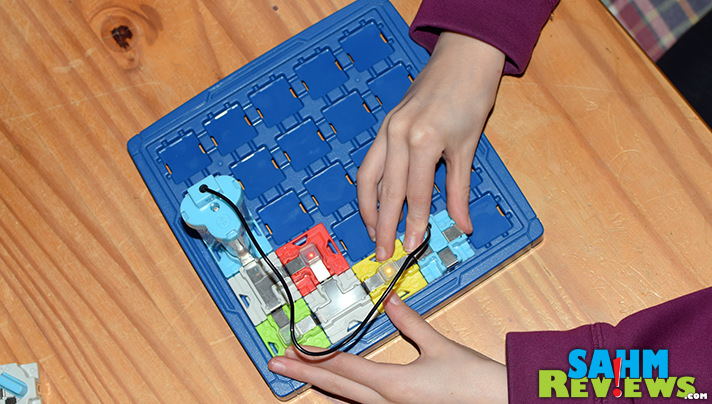 We’ve already managed to solve the entire set of beginner cards and are starting on the intermediate section tomorrow. My youngest and I have already had some great conversations about direction of flow, resistors and short circuits. She even compared it to some of the techniques she used when playing the classic card game of Waterworks!

I would be remiss by not mentioning one drawback to this type of game. You’ll need three AAA batteries and should remove them from the power supply each time before putting it away. While the puzzle does have safety features that will prevent a short circuit, because the entire item is battery-powered, unless you carefully store them in the included plastic tray, you run the risk of burning through batteries rather quickly if they close a circuit while in the box. The power supply is secured by a tiny recessed Philips screw – I would have preferred to see some other type of connection that didn’t require me to get out special tools (or maybe include a tiny screwdriver in the box) to make the removal easier.

Circuit Maze will be available this summer at Target.com and in Target stores nationwide. You should also be able to find it at your neighborhood toy store. Considering I paid nearly double the retail price of Circuit Maze for the sets of Snap Circuits, this is a fantastic value for the MSRP of under $30! Like this type of puzzle challenge? Be sure to check out the rest of ThinkFun’s line on their website!

Are you a positive or a negative?

14 thoughts on “Finding Our Way Through the Circuit Maze”