It’s been a very long time since we’ve found a game by Jax at thrift that we didn’t already own. We’re huge fans of the original Sequence game and have since invested in both Sequence Dice and Kazink, a Sequence-like standalone title. We’ve also found Polygon, Doodle Dice, Link-O and more at thrift – the list goes on. But nothing for well over 18 months. Until now.

Shake Up is one of those games that definitely looks of the era in which it was made. Originally issued in the late 90’s, it’s a quick game for up to four players. Inside the box is an injection molded custom 3D board, four standard dice and pawns in individual player colors. Setup takes seconds – line up five pawns for each participating player on the lowest level of the board (on the corresponding side). Each person rolls one die and high roll will be the first player.

On a turn you will roll all four dice Yahtzee-style (reroll as many as you like, up to twice). You are trying to end up with a Yahtzee-like result of straights, three- or four-of-a-kinds, pairs, etc. Your final result will dictate your movement on the board. 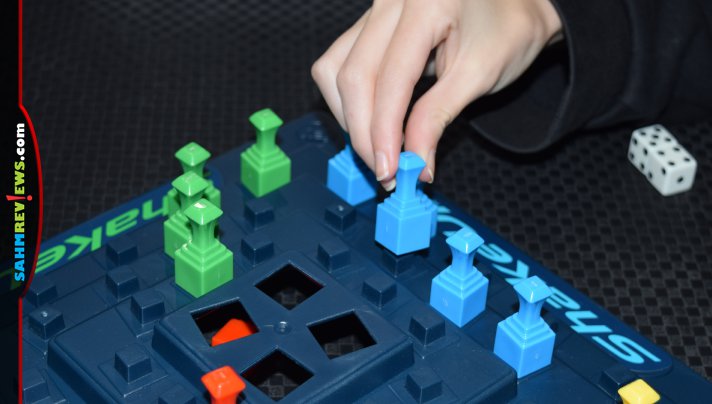 Three-of-a-kind, a run of three or two pair allows you to simply move up one level, then play moves on to the next person in clockwise order. At least a pair is needed to pass the dice without any penalty. If you happen to roll all different numbers and none in a row, you must move one of your own pawns back to the lowest level. 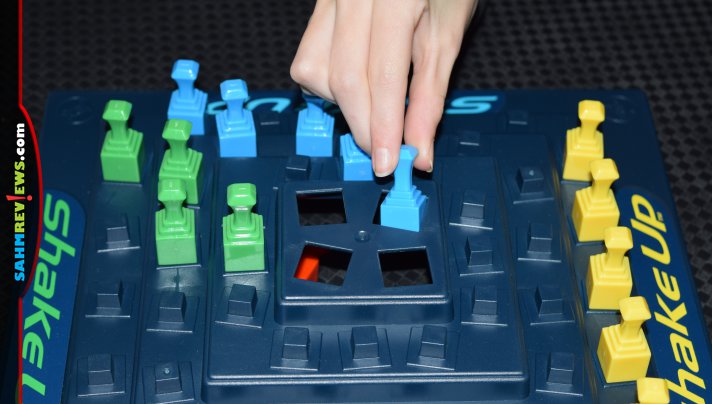 One other rule – in order to move up to the next level, you must have at least two of your pawns on the previous level (except for the last pawn, the straggler, who this rule doesn’t apply to). When you get to the top of the pyramid (center of the board), your pawn will drop through the safe zone holes. Once there, it cannot be sent back to the bottom. The first player to get all five of their pawns into the safe zone wins Shake Up! 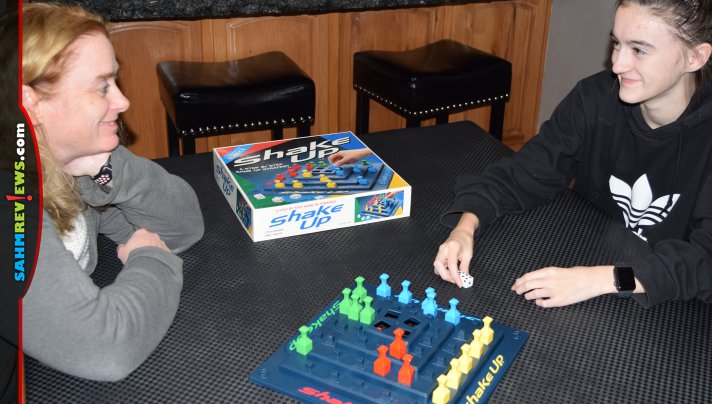 While you can find Shake Up on Amazon, those copies seem to be overpriced. Your best bet is to look for a secondhand copy on eBay or at thrift for much less money. There aren’t many pieces to inventory, so make sure they’re all present. If dice are missing, you can use any standard six-sided dice to replace them!

What is your favorite 90’s-era board game?

17 thoughts on “Thrift Treasure: Shake Up Board Game”