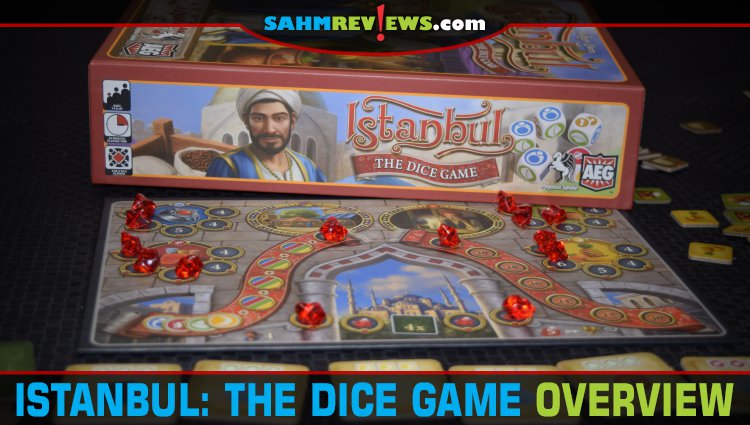 Last week while we were playing Shake Up, a vintage game we found at thrift, Nicole was frustrated by how well some of us (me) were rolling. The best rolls in the game were straights of four or four-of-a-kind. This allowed you to take three actions, one of which was getting another turn. The dice were just falling in my favor and I easily had more than double the number of turns than the other players. Nicole joking commented that we should quit playing and head to the casino. But I don’t think the casino pays out for a Yahtzee…

In my hopes that my hot streak was still running, I decided to break out our copy of AEG‘s Istanbul: The Dice Game to play. We’ve never owned the original Istanbul, but have played it once many years ago. Long enough that I don’t remember enough about it to make a comparison. However, because Nicole is such a fan of dice games whether she’s rolling well or not, I figured this would be a great way to extend my winning streak. 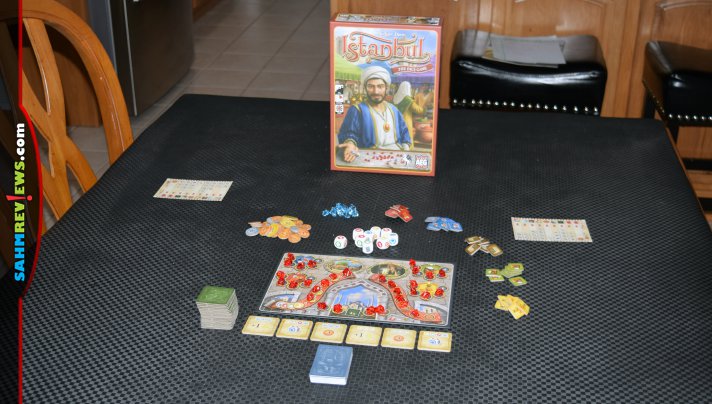 The premise of Istanbul: The Dice Game is you and up to three other players are participating in a trade competition. You’re vying to collect rubies faster than everyone else. Set up the game by placing the two-sided game board in the center of the play area and populate it with rubies according to the number of players. Mosque Tiles are mixed together randomly with six revealed as an available market and the rest face-down for use later. Bazaar Cards are shuffled and placed face-down to form a draw deck. The rest of the components – dice, coins, goods markers and crystals – are arranged and kept near the board. Each person is given an Aid Card and one crystal to begin the game. Pick a starting player and give them five of the custom dice. All other players receive coins to compensate for beginning later.

Istanbul: The Dice Game is played over rounds with each player taking a turn in clockwise order. A turn is broken up into four steps. First, collect any income from Mosque Tiles in your possession. Next, roll five dice (you may have more due to the Mosque Tiles – roll them all) to determine what you have to spend this turn. If you don’t like the results, you may spend one blue crystal to reroll as many dice as you like. You can do this as many times as you like as long as you have crystals to spend. 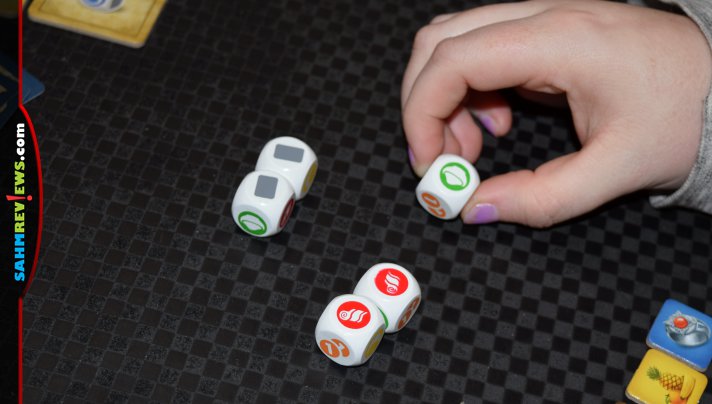 The third step is to carry out two actions based upon the results of your dice. Again, you may be able to take more than two actions if Mosque Tiles have awarded you this ability. Using your Aid Card as a guide, spend the results of the die roll to take Goods Markers, Crystals or Lira. You may also choose to take a Bazaar Card from the deck and use it. These typically provide a one-time bonus action and sometimes allow your opponents to also take a similar action if they can pay the listed fee. 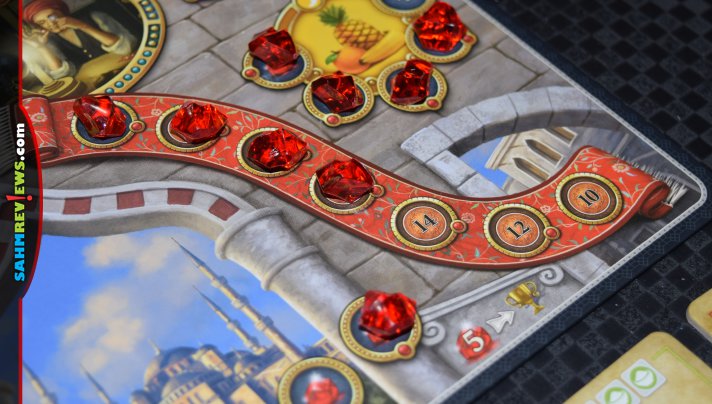 Purchase additional Mosque Tiles by spending goods equal to the amount shown at the top of the tile. These tiles award a permanent, on-going effect for only the player who owns it. As alluded to earlier, these may award you with additional dice, income at the start of your turn, additional crystals during the income phase or even a free Bazaar Card each round! Lastly, you could spend to acquire a ruby from the board by discarding the required number and type of goods matching the trade area on the board. Each time a ruby is purchased, the price of the next one is increased. Some are paid for with goods, others with Lira.

Players take turns in clockwise order until one person manages to obtain their 5th (4-player game) or 6th (2-3 players) ruby. Finish the round so that everyone has had an equal number of plays and the person with the most rubies is the winner of Istanbul: The Dice Game! When tied, players convert their goods and crystals into Lira and the person with the most is the overall victor! 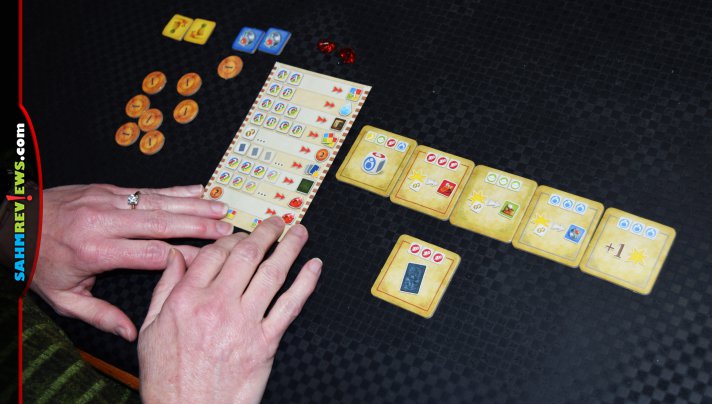 Istanbul: The Dice Games is a lot more strategic than you would expect from a game with a random element like dice. You’ll need to think ahead about which path to take to obtain rubies (goods, Lira, etc.) and plan to mitigate bad rolls with saved goods from previous rounds. The fact that the game plays in only 30 minutes is a huge bonus if you enjoy Euro-style thinkers but need something that doesn’t take hours to play. Pick up a copy from your favorite local game store, direct from AEG on their website or from Amazon with free Prime delivery. Find out what Alderac has in store for next year by following them on Facebook or Twitter!

Do you enjoy dice in your games? Or would you prefer no randomness at all?