Over the past several years, I’ve noticed that board games are mentioned quite often in modern television shows like The Big Bang Theory, Parks & Rec and South Park. While many shows still depict the standard Yahtzee, Risk, Monopoly and Battleship, more and more are incorporating more modern games including Catan. I’ve also noticed more non-gaming friends referring to Catan and it gives me hope that these types of games are finally making solid inroads into the mass market customer base. Then I realized that Catan (previously known as The Settlers of Catan) was released right after Scott and I got married! It was quite a shocker when Catan Studio recently released Catan: 25th Anniversary Edition! 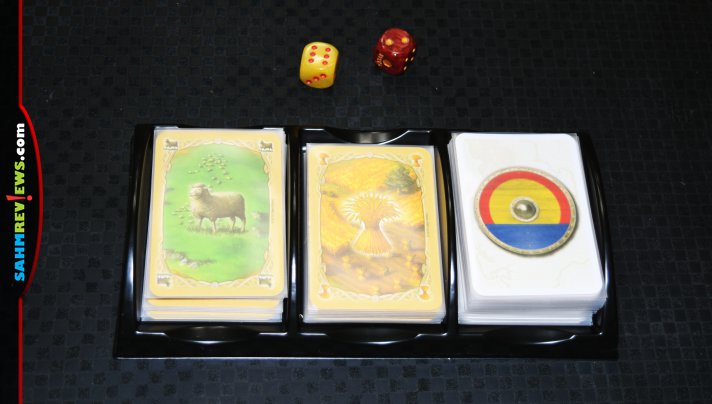 So what makes this version special? Aside from paying tribute to 25 years with a mention on the box, the game includes custom dice, player pieces, card sleeves, card sorting trays, helpers and an expansion to make it playable for 5-6 people. It’s not uncommon for people to sleeve their cards, but it isn’t often that the game actually includes them in the box. The reason for the sleeves is to provide them longevity from nicks and damages, but quite often they end up sliding around in their respective stacks (and across the table). Thankfully, Catan: 25th Anniversary Edition includes custom sorting trays that are wide enough to accommodate the sleeved cards! 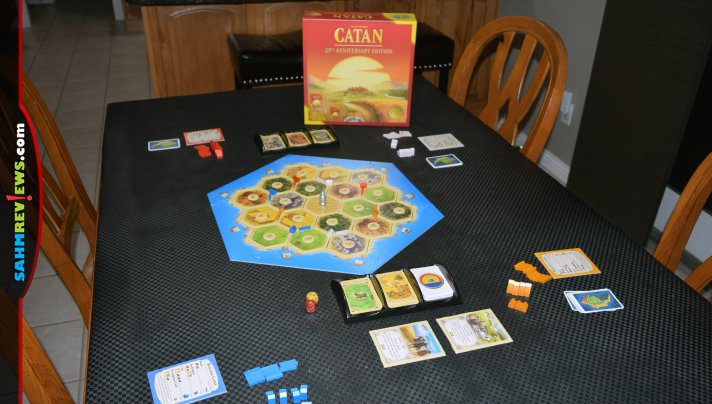 For those who haven’t played before, it is about the development of the island of Catan. Players are working to expand their territories by acquiring and spending resources. You’ll earn victory points by building roads and upgrading settlements. To set up the game, you’ll assemble the sea frames to form a border for the island. Depending on how many times you’ve played, you’ll either randomly insert the terrain hexes or use the beginner map shown in the instructions. The variable method ensures that each game is unique. 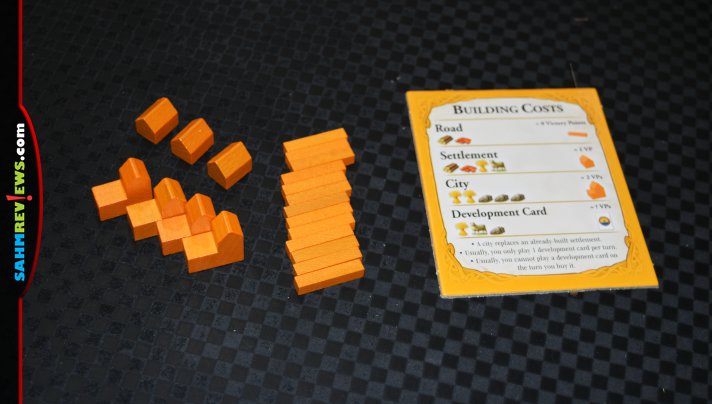 Give each player a color with their color’s building costs card, five settlements, four cities and 15 roads. Two starting settlements and roads are either placed on the board and you’ll keep the others in front of you for future development. Resource cards are placed in face-up stacks while development cards are shuffled and set face down in the trays. Players take resource cards relating to the land adjacent to each of your settlements. Finally, the Longest Road and Largest Army special cards are set alongside the board. 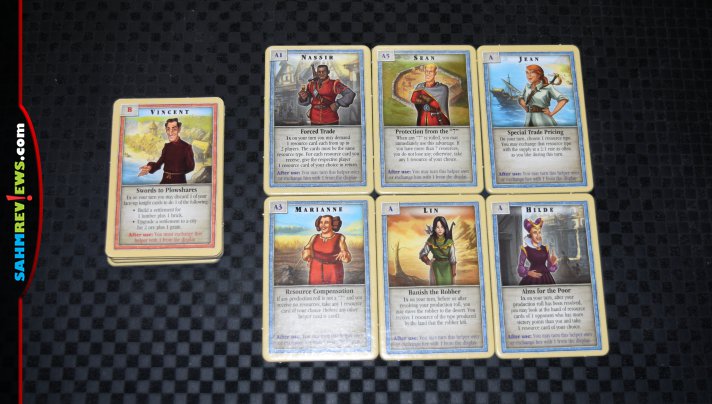 In addition to variable setup options, there are also helper cards that can be incorporated for more advanced players. These cards allow you to look at other players’ hands, gain additional resources or substitute resources during construction or purchasing development cards. We won’t be incorporating them into this overview as we want to keep it fairly basic. Each turn consists of several steps that include 1) rolling for resources, 2) trading with other players and 3) building roads, settlements or cities and/or buying development cards. Once you’ve completed these various steps, you’ll pass the dice to the next player and their turn begins. 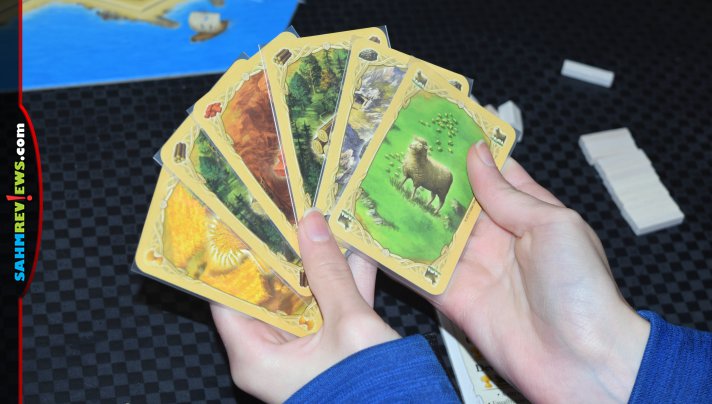 On your turn, you’ll roll the dice and resources are distributed to any settlement connected to the results. Unlike many games, this isn’t exclusive to you. EVERY player that borders the rolled number receives a resource card relating to that land type.

Since you are only able to receive resources that you have access to, sometimes you’ll need to trade with other players in order to acquire what you need to fulfill a development card. You make an announcement as to what you have to trade and what you want then other players make offers. 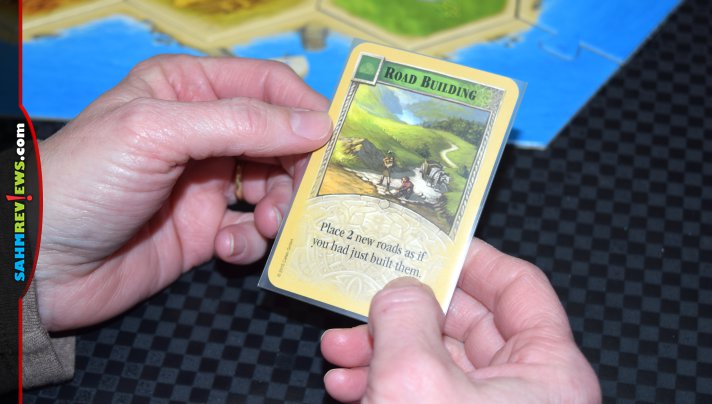 There are three different types of development cards: knight, progress and victory point. To purchase one of these, you’ll spend one (each) ore, wool and grain then keep the card secret until you play it on a future turn. Knight cards are used to form an army and impact the robber which I’ll explain in a minute. Progress cards have specific instructions that allow you to claim resources from other players, build roads or take additional resource cards. Victory point cards remain hidden and go toward end-game scoring goals. 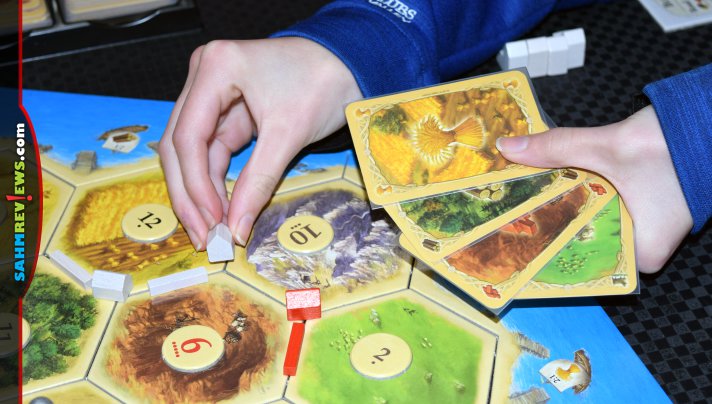 In order to access additional resources, you can expand your road network, improve your production or buy development cards. You build roads by roads by trading in one brick and lumber. Only one player’s road may be constructed on a pathway. Settlements are created with brick, lumber, wool and grain and may only be built if all adjacent intersections are empty and must connect to at least one of your own roads. Three ore and two grain may be exchanged to upgrade a settlement to a city, allowing you to collect two resource cards for each adjacent terrain during the production phase. 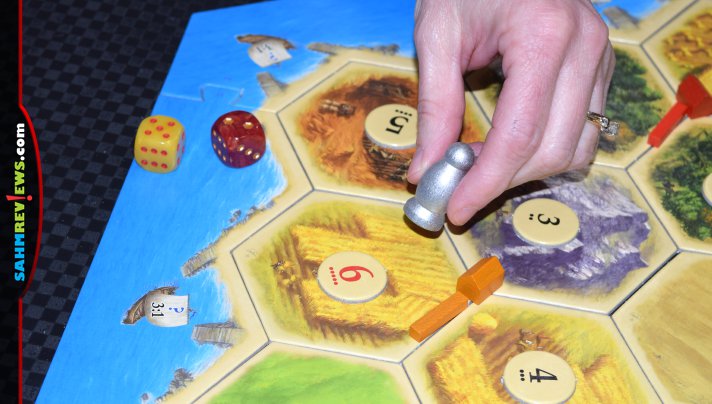 When a seven is rolled, the Robber is activated and every player with more than seven resource cards must select half (rounded down) and return them to the supply. Since seven has the highest probability of being rolled, this can happen quite often. Then, move the robber to another terrain or desert hex and steal one (random) resource card from an opponent with a settlement or city on that hex. Players don’t collect resources for hexes containing the robber.

Catan ends when one player has ten or more victory points during their turn. The game ends immediately and that player is declared the winner. Catan: 25th Anniversary Edition is an excellent introduction to modern hobby board games. As a bonus, it may help you appreciate some of those references in pop culture. Set your sights on Amazon to procure a copy for your game collection or check with your local game store for availability. Keep up to date on the latest developments from the Catan Community by visiting their social channels (Facebook and Twitter).

What are some other modern games you’ve spotted in current TV shows?