Scott and I became aunt and uncle before we were blessed with kids of our own. What we discovered is something that all too many before us had already figured out… there are segments of individuals on our list that are pretty difficult to buy for. Namely, teens, older kids and oh yes, adults. We often buy experiences such as concerts and plays for my parents because we have always been at a loss for what else to get.

This year, we decided to put together a list of gift ideas for all the aunts and uncles, parents of older kids, kids who are buying for their parents and individuals in gift exchanges where they are at a loss for ideas on what to purchase. The following are games that cover a variety of themes such as art, travel and history so you can find a theme they will connect with. We have featured some on the site previously and you can learn more by clicking on the

logo. If you are curious about others, just ask! These games were created by talented designers and distributed by reputable publishers.

If you need other ideas, check out the gift guides we have already published and keep watch for additional ones yet to come.

Welcome to Costa Rica! This land is renowned for its rich diversity of insects and animals, and you are part of several teams that will explore and record the wildlife on this rainforest paradise. Each turn, you and your fellow explorers will reveal what is hiding. Will you take your data back, or keep pushing on, even though another explorer might take credit for your hard work? 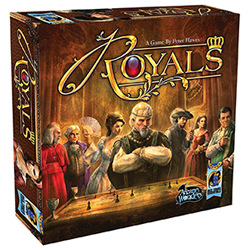 Royals is a strategy game of intrigue and power for 2-5 aspiring Nobles. You are the leader of a great noble house of the 17th Century, fighting for supremacy over Europe. Place those who are most trusted to you into positions of influence while eliminating your opponents. It is time to show your power, after all, you and your family are Royals! 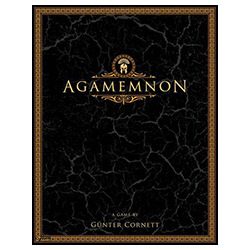 Driven by the ambition of their king, the Greeks have arrived on the shores of Troy. Some seek power; some revenge, others seek the great moment in battle that will define their place in history. From veteran designer Günter Cornett, Agamemnon is a fast-paced strategy board game in which two players take roles of ancient Greek gods during the Trojan War. By tactically deploying warriors to where they’re needed across the board, each player may influence the outcome of battles famously detailed in Homer’s Iliad. Some areas will be decided by warriors’ strength, some by weight of numbers, and others by inspiration heroes provide. 2 Players Ages: Ages 12+. 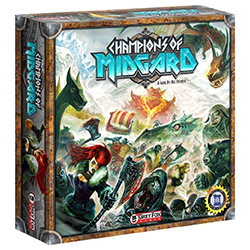 Trolls attack your town. Draugr terrorize nearby villages. Monsters strike at travelers and merchants alike. The people are suffering – will you be their champion?

Champions of Midgard blends worker-placement and dice-driven combat to create an exciting and strategic experience. Recruit warriors, gain powerful runes, and peer into the future – then send your faithful fighters on journeys to defeat fierce and mythical beasts. Gain the most glory to become the new Jarl and be recognized as a Champion of Midgard!  Ages 10+. Players 2-4.

Defenders of the Realm

Defenders of the Realm is a cooperative fantasy board game in which 1-4 players take a role as one of the Kings Champions (Choose from Cleric, Dwarf, Eagle Rider, Paladin, Ranger, Rogue, Sorcerer and Wizard). You, as one of the Kings Heroes make use of strategy, special abilities, cooperation, card play and a little luck in Defense of the Realm for a unique experience every adventure. But be forewarned! There is never time to rest. As each Enemy General is struck down in battle, the remaining dark forces only grow more difficult to vanquish and their march to Monarch City gets faster with each Hero victory! Ages 13+

During the medieval goings-on around Orléans, you must assemble a following of farmers, merchants, knights, monks, etc. to gain supremacy through trade, construction and science in medieval France. This is a bag building game with many paths to victory and huge replayability. 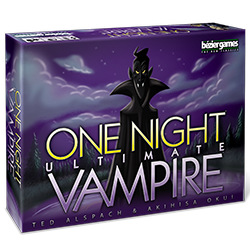 In One Night Ultimate Vampire, the sun has just set, and vampires have descended on your sleepy little town, slowly turning the villagers into even more vampires. Fortunately, the village has several residents with special powers, with most willing to help eliminate this fanged menace!

One Night Ultimate Vampire is a fast game for 3-10 players where everyone gets a role In the course of a single evening, your village will decide who among them is a vampire… because all it takes is finding one vampire to win! 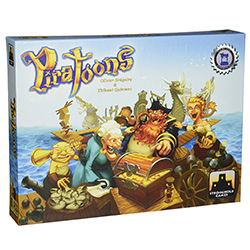 Build the biggest, baddest, best Pirate ship on the high seas! Recruit your crew to plunder booty! In Piratoons, treasure is sealed in the treasure chest formed by two double-sided game boards with raised edges. The chest is then physically turned over and opened. Each Pirate sends crew to plunder treasure of boat parts or equipment. The more crew a Pirate commits to a treasure, the more chance getting it… usually, but watch for other sneaky Pirates! Pirates score points for the fastest, largest, best ship, most types of equipment, etc. The Pirate with the most points at the end of the game wins, becoming the most notorious Pirate of all! 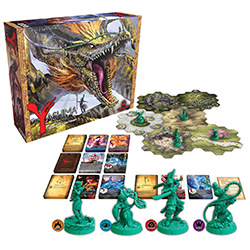 Yashima, Legend of the Kami Masters is a card-driven miniatures game where each player customizes their chosen kami master and engages in player vs. player or team vs. team combat. It includes four characters and four kami, each with their own deck of cards. Each character includes a high-detail miniature. There are three expansions available for Yashima: Legends of the Deep Woods, Legend of the Icy Peaks, and Legends from Fairytale. 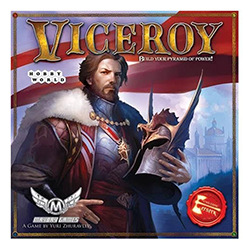 Viceroy is a board game for 1–4 players aged 12 and up. As they struggle for control over the fantasy world of Laar, players recruit a variety of allies, from a wanderer to a prince, and enact various laws. As the game progresses, each player builds their own pyramid of power by developing their state’s military and magical might, increasing their own authority, and gaining the precious gemstones they need to continue expanding their nation. The player who has the most power points at the end of the game becomes the ruler of all Laar — and the winner!

Nebula valley has just emerged from an era of darkness and the people need your help to reclaim their homeland and rebuild their lives. Explore the misty meadows, unearth precious resources, and build towns and transportation atop the ruins of what the valley used to hold. Restore peace and prosperity to the towns of Nebula, and receive glory, prestige, and riches in return. The best of you will receive the gratitude of the region’s people forever and a statue in their town square to show their deepest appreciation.

This age of art and capitalism has created a need for a new occupation, the gallerist, which combines elements of the art dealer, museum curator, and artists’ manager. You are about to take on that job! You will promote and nurture artists; buy, display, and sell their art; as well as build and exert your international influence. As a result you will achieve the notoriety needed to draw visitors to your gallery from all over the world. There’s a lot of work to be done, but don’t worry, you can hire assistants to help you and there’s a long queue of unemployed Art aficionados lined up, hoping to work with someone of your stature. 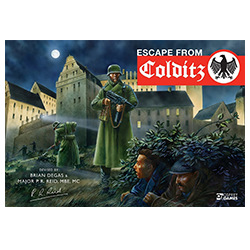 7 Ronin is an asymmetric two-player game in which one player controls a group of ninja attacking a village that’s defended by seven ronin (masterless samurai), which are controlled by the other player. The ninja player wins by occupying five of the village’s ten areas, while the ronin player wins by surviving eight rounds. Each turn starts with the players distributing their forces over the village areas simultaneously and separately. Their choices are then revealed, and combat resolved. Each of the ronin have a different special ability to aid the defender, while each of the village areas have a special ability usable by the attacker once it has been occupied.

With topics from history to art (and a bunch in-between), something from this list should be able to fill the gap for the difficult to shop for teen, older child or even adult on your list. Again, Look for the tiny

logo on titles that we’ve previously given a full preview. And in case you were curious, 9 games from this list are taking part in our 100+ Days of Giveaways! Are you as excited as we are? 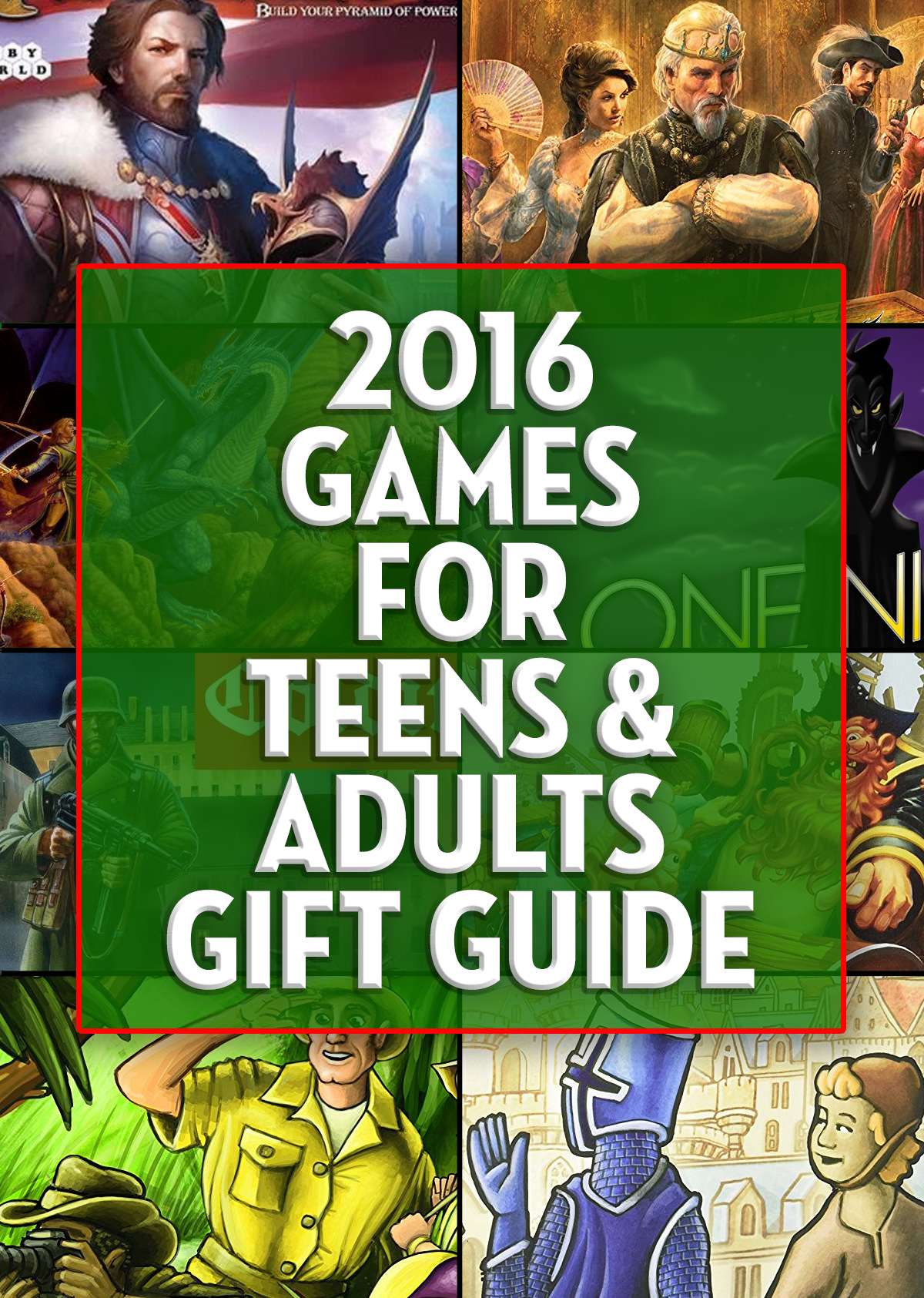