The past several months have been filled with unwelcome phone calls at unreasonable times, so many unwanted flyers on my door and in my mailbox and enough TV ads that I started to regret watching anything that wasn’t on the DVR. 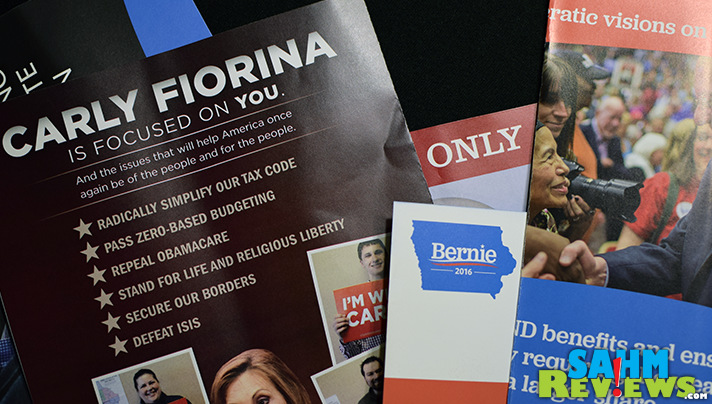 Why all this nonsense? Preparation for the upcoming presidential election. Specifically, the Iowa Caucus.

This is my 8th presidential election but only the 5th time I’ve been able to caucus. (California, where we resided for a number of years, utilizes a primary system instead of a caucus.) Yet this year was my first time to attend. Why was this my first? Because… I have NO IDEA why I’ve never caucused before. Maybe I didn’t know how important it was. Maybe I was too busy. But most likely, I didn’t realize I could. Or for that matter, that I SHOULD. I never took the time to ask what it was or how it worked.

So what is a caucus, you ask? Let me tell you because I’m proud to say I actually know. At least NOW I do. I realize that it’s very important and everyone who will be voting age by the November election should participate. It’s the process by which voters indicate who they want to represent their party in the Presidential election.

Let’s take a step back to where it begins:

As you know, there isn’t just one person who wants to run for the office of President of the United States. There are many. In addition to any independent candidates on the November ballot, you’ll find only one for each of the major political parties. That doesn’t just happen by chance and it isn’t a decision randomly made by some committee somewhere. The caucus and primary processes are what decide who will be graced with the honor of representing the party.

In the year+ leading up to the November election, all the potential candidates present their platforms of what they believe in and they oppose then they set themselves apart from the others for why they are the ideal person to hold the most esteemed job in the country. They send out flyers, run television and radio ads, do interviews on talk shows and more. They participate in debates against other members of their own party to showcase their stuff. But people like getting up close and personal, asking questions and literally shaking the candidates’ hands. Votes have the opportunity to do so during rallies and small town hall meetups in the various states in advance of each caucus or primary.

Iowa happens to be the first state in the nation to start the process. What I find the most interesting is that the Republican party and Democratic parties each have different procedures for how they caucus. The one constant is that you MUST be registered with that party to participate. Forms are available on site to update the voter record.

For Republicans, voters attend the caucus location and separate into different rooms by district. Candidates are allowed 2 minutes to speak or have a representative speak on their behalf. If the candidate doesn’t have a designtated spokesperson, anyone can offer to speak for them. At the end of the presentations, attendees fill out a secret ballot with their selection and the ballots are collected. At this time, participants are allowed to leave if they choose. The votes are tallied and the vote totals are read out loud for everyone to hear.

While the process of representation and presentations is basically the same, the voting process is seriously different for Democrat caucus-goers. There isn’t a secret ballot. There are literally sections of the room designated for each candidate and participants physically move themselves to that area. If a candidate doesn’t have at least 15% of the total, voters in that section must select one of the remaining candidates. Each group is allowed to discuss and share why they are the better alternate option for those ‘re-voters’ and in one of our precincts, I heard one of the groups was offering cookies. Yes, food. Sounds wonky to me, but I guess all is fair in love and politics. The process repeats until a majority candidate is determined. In the unusual situation where there is a tie (with participants at a deadlock about switching sides), then a coin is flipped. That’s right… it’s an official caucus rule for Iowa Democrats. A toss of the coin is the final say in determining that precinct’s selection. This year, it happened in many precincts across the state. If I recall correctly, there were 3 in our metro area alone.

For the first time in my life, I attended and voted in a caucus. It had me energized to see the record numbers of people, many like myself attending for the first time. In some precincts, they ran out of ballots because the attendance was so high! I’m proud to have finally learned what a caucus is and hope you’ll do your civic duty, take advantage of a right that Americans take for granted. Participate in your state’s caucus or primary.

Have you ever wondered how a caucus works? Have you attended one before?

22 thoughts on “How a Caucus Works; Including Coin Toss”