Home / Recreation / Movies / On the Inside Out Premiere Red Carpet 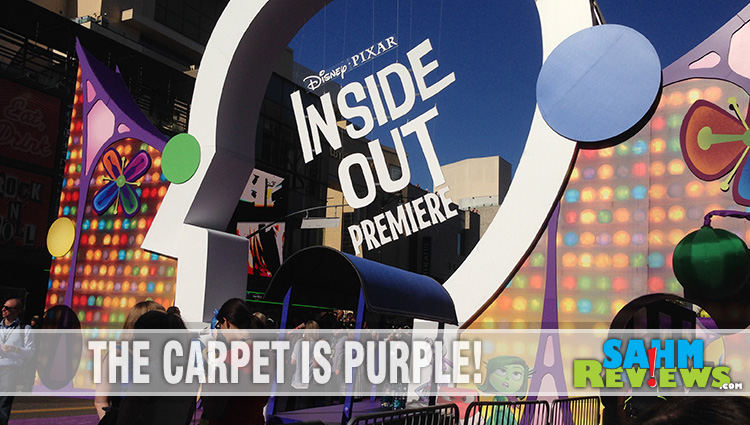 On the Inside Out Premiere Red Carpet

My work in social media takes me to pretty interesting places. I’ve met some cool celebrities over the years, but last week I was sitting in El Capitan in Hollywood with a house full of A-list celebrities and their families at Pixar’s Inside Out premiere. That was right after I spent a few hours mingling among them at the pre-party! 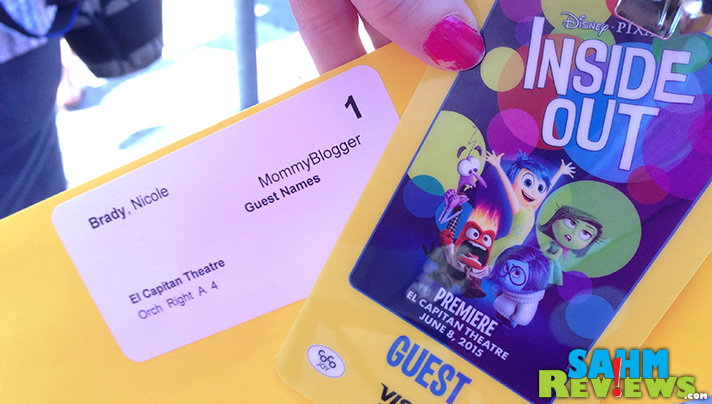 When I’m excited about a story that I want to share, I’m never quite sure where to start. Today is no exception. As I sit to type this and tell you about the amazing experience on the red carpet, my brain is experiencing serious focus issues. The food, the people, the carpet, the entertainment, the Paparazzi, the… the… the EVERYTHING was just so surreal!

So I thought I would share with you some things I learned, noticed, experienced while walking the red carpet, joining in the pre-party festivities then watching the film!

First and foremost, the red carpet wasn’t red. It was purple. As silly as it sounds, that totally tickled me. At one point, I used the hashtag #TheRedCarpetIsPurple. Why did it tickle me so much? Because purple is the color representing Fear in Inside Out. Fear was the absolute last emotion I was experiencing there. 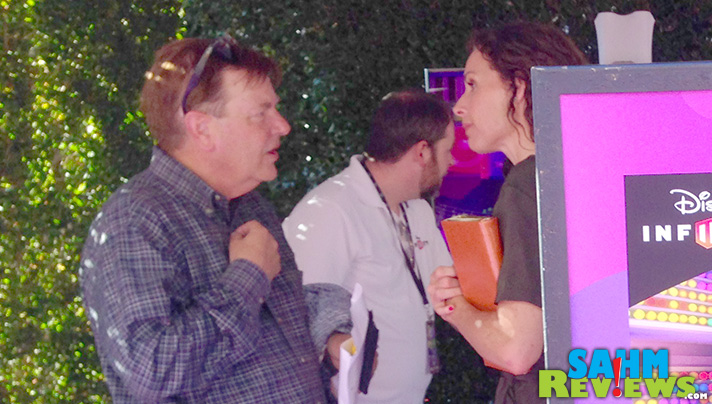 Now don’t get me wrong. I was definitely not in my comfort zone. It was my first trip and I didn’t want to miss anything. There were tons of activities to participate in and food to consume. There was a station to create a spin-art Frisbee. Play with the Inside Out characters at a demo of the new Disney Infinity 3.0. I went into the Disney Infinity tent, but Minnie Driver was there so I didn’t stay. I felt like I was intruding on her space. There was a station to decorate snack water bottles, but I felt that was an activity better suited to families and kids. If my girls had been with me, I totally would have done that one! There were even a few different carnival-style games too. 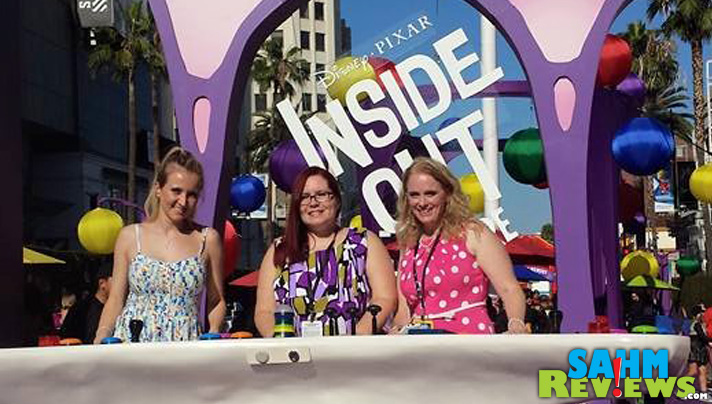 Each activity was decorated with themes related to the movie. “Imagination Land”, “Hockey Island” and even a place to create core memories. Yet I only did two activities that didn’t take a lot of time. I simply wanted to spend my time people watching.

I saw one person with a bright pink suit that was pretty much the color of my dress. I walked toward them to get a closer look at the color, motioned toward the outfit, then said to Susan, the veteran blogger showing me around, “Oh my goodness. We match!” I smiled. I guess I’m easily amused. 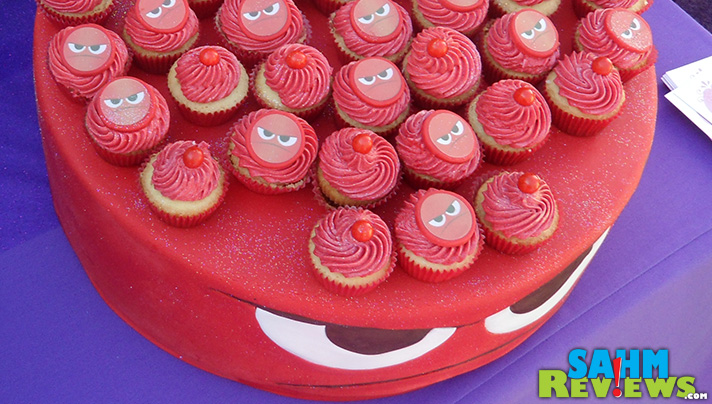 Oh, and I ate an Anger cupcake. They were so cute and had hardly been touched. Someone needed to show that they weren’t just decoration. There was other food – like broccoli pizza – that I did help myself to. Of course, the broccoli pizza came AFTER I ate the cupcake. That was Joy at work creating a memory in my headquarters.

Let’s be realistic though. Red (or in this case purple) carpets are all about the talent, right? Of course. And the simple truth is the people watching that I wanted to do was all about the who’s who on the guest list. The people I might get to see up close and personal. Like with Minnie Driver, I didn’t want to be intrusive. 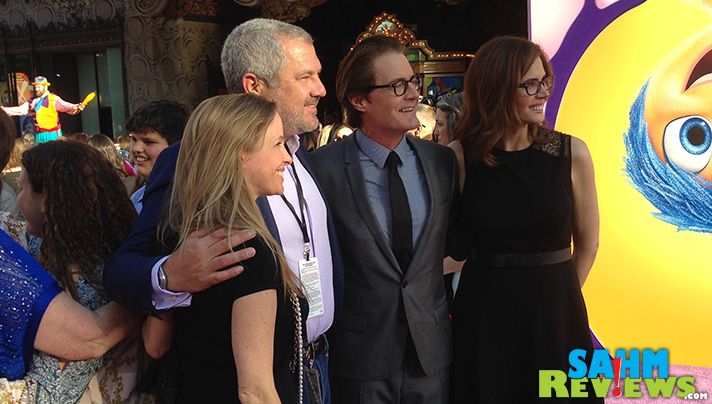 Earlier in the day I had the opportunity to sit down with Kyle MacLachlan, so I was excited to see him on the carpet. Of course, I heard Pixar’s Jonas Rivera speak at Disney Social Media Moms Celebration (DSMMC) and I was extremely hopeful that I would run into him. When I spotted him, I had no qualms about introducing myself and telling him how much I enjoyed listening to him at DSMMC. He’s so kind and genuinely appreciated hearing how I felt about his presentation. That was pretty cool.

Okay. Maybe that’s all it took for me to realize these celebrities are real people and as long as I wasn’t being a burden then they wouldn’t mind a photo. Some people like Amy Poehler, John Ratzenberger, Mindy Kaling and Phyllis Smith were getting a lot of attention posing for Paparazzi and talking to reporters in the beaming SoCal sun. I took their photos without bothering them. I later found out that l am in the background of one of the photos on the Inside Out Facebook page!

Remember the person with the pink suit that I mentioned? I recognized her as Paula Poundstone, but she was in the middle of a conversation when I spotted the suit. When I found her mingling later, I asked if she minded a photo since our outfits matched. As we posed for a photo, I said “We totally planned this.” Like she expected it, she commented that she called me. After that, I did manage to get a few celebrity photos but once again, I didn’t want to overstep my welcome while they were enjoying the Inside Out premiere festivities with their families. After all, I would like to be invited back again some day. Manners and etiquette mean a lot – both on the red/purple carpet and off. 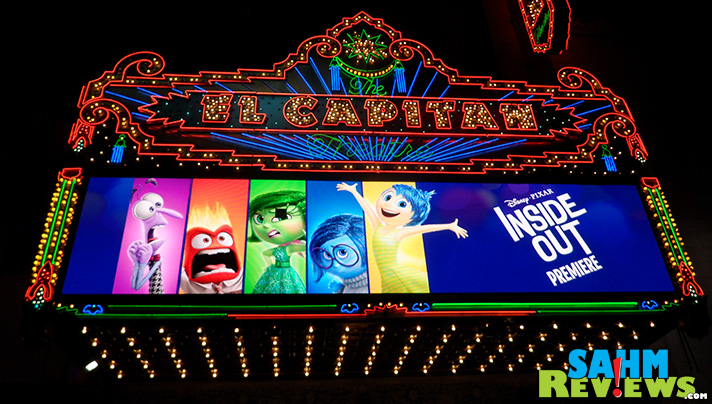 Eventually, the pre-party wrapped up and we all filtered into the El Capitan theatre. I had seen Pixar’s short, LAVA, while at DSMMC, so I smiled and sang along quietly to myself during the short. It’s touching so I also had tissues readily available. 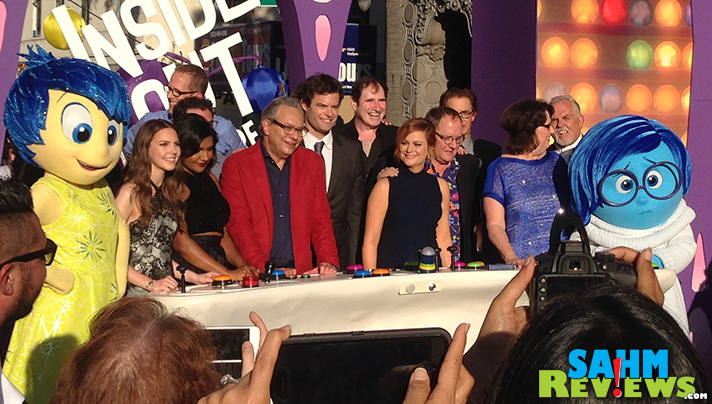 When the movie started, it was so much different than seeing it at a regular theater. I was watching it not only with the stars who brought it to life, but also with the people who work behind the scenes to make it all happen. I was seated in the front row and was able to look backwards over my shoulder and see Kyle MacLachlan, Phyllis Smith and a few others. Seeing their reactions was priceless. I’ll share my thoughts on the movie in a different post, but I can tell you this… it’s worth setting aside some time to go see when it releases in theaters this weekend.

22 comments on «On the Inside Out Premiere Red Carpet»