My brothers were avid wrestlers when we were growing up. I don’t mean the WWE style, I’m talking about wrestling like you see in school or at the Olympics.  They participated in Saturday tournaments, sports camps and all.  I remember many occasions where one would be in a hurry to get to morning practice before school and that meant a shotgun breakfast.  Carnation Instant Breakfast was a staple in our pantry and even as an adult, I keep a few packets on hand.

On SAHM Reviews, I’ve discussed my fondness for Special K products so I wasn’t surprised when one of my PR reps asked if I would be interested in trying out the new Special K Protein Shakes.  Chocolate, shelf-stable, ready to drink.  With the chaos of two kids while trying to make it to the gym in time for class, a quick and flavorful drink sounded like a good fit.  Special K brand… yeah, that sealed the deal.

I received two complimentary bottles in the mail and promptly popped them into the fridge.  They don’t require refrigeration until after they’ve been opened, but if I want a warm chocolate drink for breakfast, I’ll make hot chocolate. 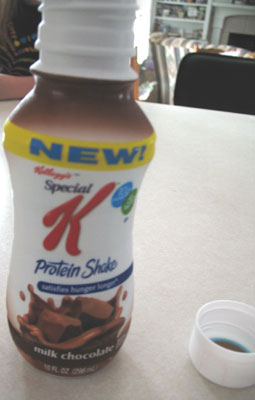 Those drinks couldn’t have been in the fridge for more than a half hour when a giggling Miss K attempted to lay claim to them.  When she asked her dad about them, he pointed to me and said “Those are your mom’s. You’ll have to talk to her.”  She batted her eyes and reminded me that we share things in this family.  Dangit, she’s right.

A few days later, before heading to work out, I opened one and gave it a taste.  I told Miss K that she would not like it but she saw right through that ploy.  She tasted it, replied “Yummm” and wanted more.  I’m glad that I decided to chill it first because it was cool and refreshing, smooth and creamy.  It reminded me of melted chocolate ice cream.    I should have been sipping and enjoying it but guzzled it down. The only difficult thing is that it’s supposed to be a grab and go weight management drink.  I wasn’t hungry after drinking it, so that’s good, but it certainly tasted like another.  Lacking willpower, I might talk myself into more than one, defeating the weight management perspective. Like anything, moderation is key.

While I’m still a fan of a traditional breakfast of cereal, granola bars, eggs, toast or oatmeal, Special K drinks are a nice change of pace.  I could have used a few for my recent trip because since they don’t require refrigeration, they can easily be packed with other snacks without the concern of spoilage! They will be nice to have on hand for times when the bus is late or I’m in a hurry to get somewhere. It’s also great that the kids like them because there are times when they’re running late also!

I apologize for the horrible picture, but both my sample bottles were long gone before I even downloaded the photographs from my camera. And since I’ve been traveling and whatnot, I haven’t picked up any more at the store yet to get a better picture!

You can choose from Milk Chocolate, Strawberry or French Vanilla. I only sampled the Milk Chocolate so can’t testify to whether the other varieties as good. Personally, I would love to see a Hazelnut flavor! If you try them, be sure to drop me a comment and let me know what you think of them.