Home / Recreation / Games / 20+ Food Products That Have Been Turned Into Real Games! 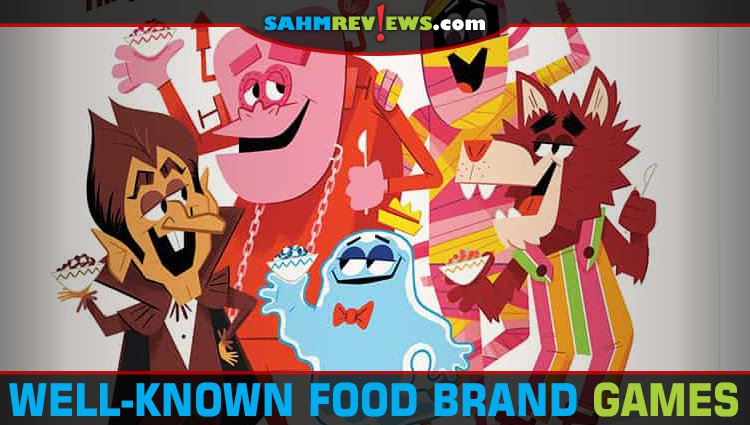 If you saw one of these games on the shelf of your local retailer, you’d probably wonder if you had stumbled into the wrong aisle. There’s a mini-fad going on right now in the game world. And that is to not only brand a game after a well-known food product, but to make the packaging looks exactly like its counterpart in the grocery section!

This fall we saw four new issues that met this criteria. The Heinz/Kraft/Jell-O 3-pack of games was featured in our Pop Culture Gift Guide and a themed version of Yahtzee modeled after the famous Nissin Cup Noodles styofoam cup just hit the market in time for the holiday season. Looking back, these games are just continuing a trend in place since the late 70’s/early 80’s, albeit with more realism than ever before.

If you ever wanted to start a mini-collection of games, this would be a perfect category to hunt down. Many can still be purchased new on Amazon and eBay hosts a number of used versions of others. There were only a couple we couldn’t find currently for sale anywhere. That doesn’t mean they’ll be hard to find, it’s just that the demand for them (and the price realized) just isn’t that high.

Here’s a starting point for your new collection. Twenty themed games that if stored in your kitchen will look as at home as in your game room! 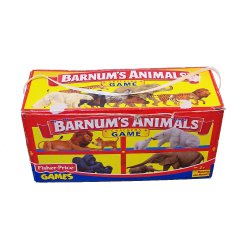 An over-sized animal crackers box (complete with string handle) containing 16 animal cards, 9 plastic animal crackers/cookies and a cloth bag to put them in.

The rules describe three games to be played with these components, all of which are memory/matching games.. 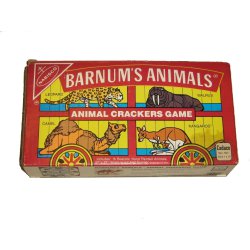 The board has 16 painted platforms (the round kind that the clowns roll in) forming the ring. Place all 16 animals on these dots. On each side of the square board are circus wagons, each with cages for four different animals. Each player chooses their wagon from the gameboard. They will try to fill their wagon with the pictured animals. The player spins and then may take either animal that they need (from the inner or outer circle) and put it on its matching cage in his/her wagon. If the player has neither animal he/she passes the spinner to the next player. First to fill their wagon is the winner! 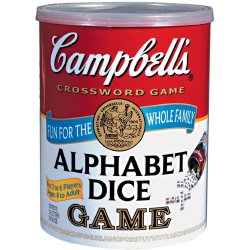 A nostalgic game that comes in a faux can. Split dice among the players, everyone rolls, build a crossword and roll again when stumped. The first one out of dice wins! 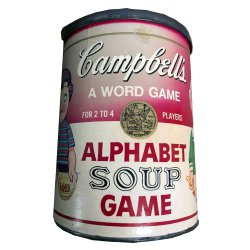 This is a spelling game which features Spoons which players use to draw letters out of the soup can. Those letters are then used to create words which score points. 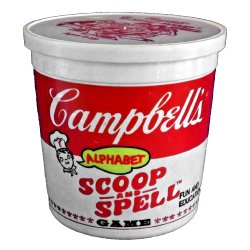 Campbell’s Scoop and Spell is a word game for 1,2,3, or 4 players. The play consists of forming words directly on a player’s own colored place mat. Each player competes for high score by making as many words as possible with the plastic letters scooped from the ‘soup can’ container. 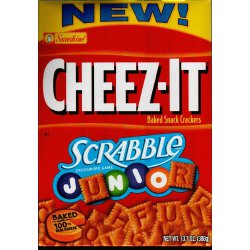 Simplified version of Scrabble Junior published on the back of a box of Cheez-Its. Game is played using Cheez-Its with letters on them as the tiles. 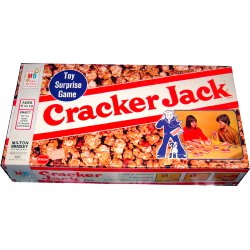 Cracker Jack Game combines memory and luck to match up Cards with Surprises to win.

Play follows these steps:
1. Spin the Spinner
2. Get Cards
3. Look for surprises
4. Match Card with surprise to keep the toy surprise.

Player with the most surprises,wins the game. 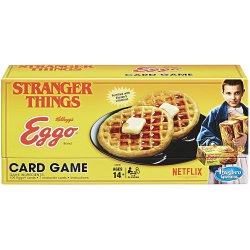 Play as one of the characters from original Netflix series, Stranger Things in the Stranger Things Eggo Card Game! Play as Will, Mike, Lucas, Dustin, Eleven, Hopper or Barb! Each card played can either send a player’s character to the upside down, make an opponent draw 2 cards, reverse the order of play, summon the Demogoron, or cause a rift that sends everyone who was Right Side Up to the Upside Down, and vice versa! Players must escape from the Upside Down and get rid of all their Eggo cards before the Demogorgon attacks. Succeed, or be toast! 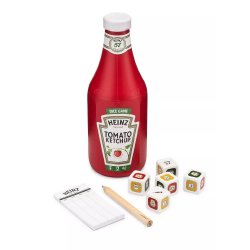 Roll the dice and collect as much ketchup as possible to try and score 57 points! But beware, if you get too greedy for the taste of HEINZ ketchup you could lose everything! Mustard and Sweet Relish bring an added level of flavor to the game, but can serve as penalties in your quest to roll the best. It’s HEINZ ketchup or BUST in this press your luck game of risk versus reward! America’s Favorite Ketchup game is definitely worth the wait. 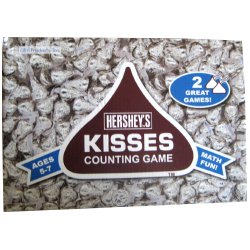 Players move their tokens around a board decorated with Hershey’s candies in an effort to collect enough candies to win the game. 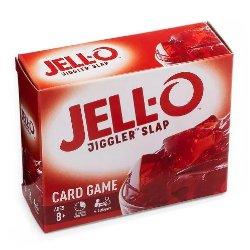 “LEFT HAND… LIME!” Listen for the JELL-O flavor that’s read out loud, then be the quickest to slap your hand– the CORRECT hand– on the corresponding JELL-O Jiggler card.

If a “Jiggle!” card is called out, you must jiggle and wiggle for the flavor you savor. You’ll love this quick-thinking, hand-slapping game from everyone’s favorite jiggly treat. There’s always room for this JELL-O gelatin game! 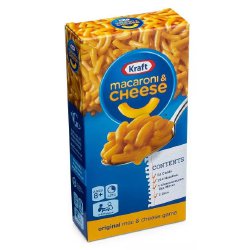 Satisfy your cravings with the KRAFT Macaroni & Cheese Game! Roll the dice and add them together, then play the noodle cards that match. Keep an eye on Cheesasaurus Rex as he boosts his way higher up the Noodle Meter, but make sure you don’t run out of noodles! The first person to play all of their cards OR the last person with leftover noodles is the mac & cheese winner! It’s cheesy goodness your family will love! 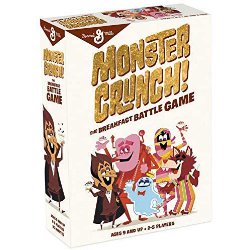 In this fast-paced game of luck and strategy, players collect as many Cereal Cards in their Bowls as they can. Each Monster has special powers to give you an advantage and help you gobble up the most cereal. Use Milk Tokens to combine Cereal Cards and take bigger bites. The Monster Cereal character that munches the most wins the game!

Play with your food in this delicious version of the classic “Shake, Score & Shout” dice game! YAHTZEE: Cup Noodles serves up instant fun and nostalgia with custom dice featuring your favorite flavors: Chicken, Beef, Shrimp, Lime, Corn, and Carrots! Roll the right ingredients to score big or try for a YAHTZEE that’s “Much More Than a Soup”! Caution: Competition gets heated. 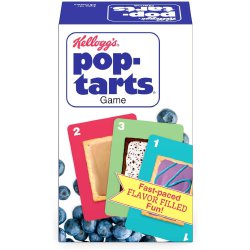 It’s a race to grab the most Pop-Tarts from a parade of pastries lined up between the freezer and the toaster. On your turn, eat the Pop-Tarts card at the front of the line. Before taking a bite, though, you can play action cards to move Pop-Tarts around, create delicious combos, or reverse the direction they’re going to improve your chomping chances. After all Pop-Tarts are gone, the player who “ate” the most points wins! 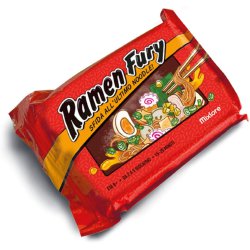 EDITOR’S NOTE – This isn’t a real brand, but the design is so close to a real one we just had to include it in this list!

Get ready to cook and savor delicious ramen bowls full of tasty ingredients. Create the highest scoring recipe by combining the cards and add a pinch of seasoning that increases its value. But keep an eye on your opponents who will try to ruin your dish with chili and want to steal the best ingredients. Finger suck fun with home service! 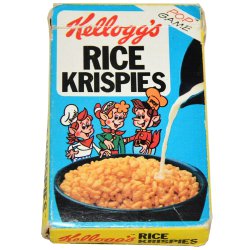 A set collecting game with everyone playing at once. You call out cards you have available to swap (but not the colour) and you try to do a deal with a player who is calling out a letter you need (but, of course, it might be the wrong colour but you don’t know that until you add the card to your hand. When you have a set of three cards (that spell POP) you shout out “Pop!” and lay down the set face-up. The game stops whilst your set is checked as valid and then starts again. The winner is the first player to lay down all their cards in valid sets. 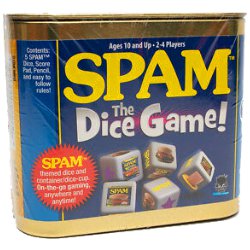 SPAM THE DICE GAME You grew up with the great taste of SPAM CLASSIC! Now, with SPAM-themed dice and SPAM tin container, the SPAM Dice Game is an instant classic, and it’s fun! Use the SPAM tin container as a dice cup and for travel. It’s the super fun SPAM themed Dice Game – great for the whole family! Packaged in a cool SPAM tin that is perfect for travel. What’s in the box? 5 SPAM Dice, Score Pad, Pencil, and EASY-TO-FOLLOW Rules. 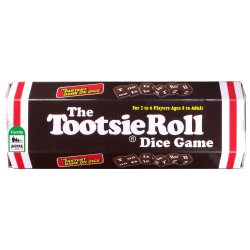 Everyone knows that party games are entertaining and fun but did you know that they can actually improve your overall well being? Group party games have been shown to have great physical and mental health benefits. They not only challenge you to think fast but also present the opportunity to engage with your peers. Playing games like Tootsie Roll can relieve stress, lower blood pressure, improve concentration and help socialization skills. Doesn’t it feel good to be together and laugh?

The object of the game is to score as many points as possible in Divisional, Conference, and Playoff rounds to get to the Winners Circle. Once in the Winners Circle, players vie for the Championship Ring. Points are scored by correctly answering trivia questions on tennis, golf, football, hockey, auto racing, baseball, the Olympics, basketball, and a special “All Champions” sports section that touches on nearly every champion and sport known to man. Along the way you try to obtain strategic advantage by landing on Playbook spaces.

If you haven’t hit the BUY buttons on any of these yet, at least you’re probably a little bit hungry. We’ve added one more to the list that you’ll need to spice up any of the foods you pick up! If you know of any other food-themed games that look exactly like the original product, leave us a note in the comments and we’ll get it added to this list! 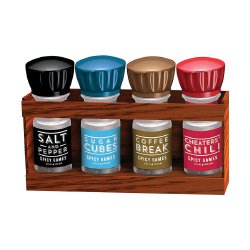 Add a dash of fast-paced fun to your life! Each game takes 2 minutes to learn and only 10 minutes to play. Each of the four games has a unique fast, fun game play! Get all four great games together with a unique spice rack!

What food brand would you like to see made into a game?

25 comments on «20+ Food Products That Have Been Turned Into Real Games!»