I’ve talked a few times lately about how Madison is growing up. She got her first driver’s license, landed her first job and attended her first college fair. Even her friends are getting jobs and it’s been quite eye-opening for her. Aside from learning about how corporate hierarchies work, she’s learning that not all customers are awesome. The biggest surprises have come from hearing what her friends have to deal with while working at a restaurant. She somberly confided one day, “My friend was so upset that so many people didn’t leave a tip after eating.”

When I first saw Born to Serve in Shoot Again Games‘ booth at a summer convention, I knew it would be a good fit for one of our holiday guides. You may have read a little about it when it showed up in our guide to gifts for tweens. Expanding on the snippet in the guide, Born to Serve tells the tale of how the government cut superhero funding so all the superheroes are competing for the diner job across the street. In case you hadn’t figured it out, we love all kinds of superhero stuff. Walking the red carpet at a Marvel release and interviewing the cast including Captain America is enough to make any nerd geek-out. WE enjoy seeing superhero movies and playing Marvel-themed board games always brings us together,. This quirky, unexpected card game kind of fits right into our personalities. 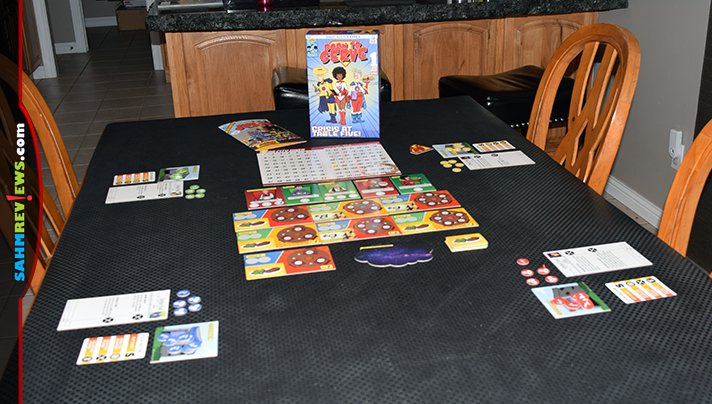 You can play Born to Serve with up to four other friends, regardless of whether they root for Marvel or DC. Take a Fortress of Loneliness, score marker and Service Markers in your preferred color then each player is randomly dealt a persona. Set the number of tables and staff based on the number of players and arrange them accordingly in the center of the table. 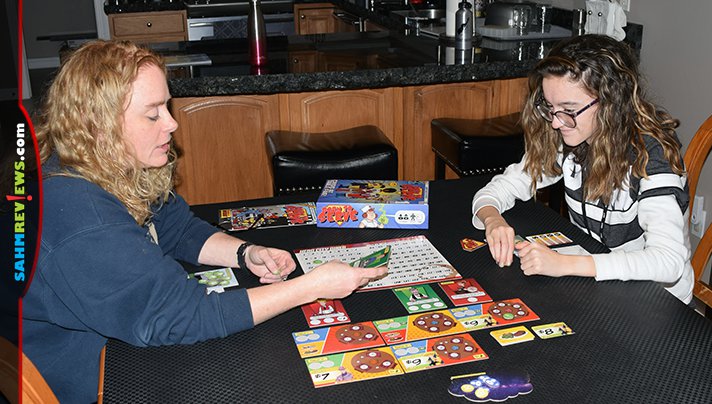 There are two different types of tip cards. One color represents regular customers who are consistent with their tips. The other color indicates transient customers who may tip well… or may not. I’ll explain how that plays into the game in a minute. Select the designated number of tip cards and prepare the stack based on the instructions. Deal one tip face down to each table in the grid. If it’s a regular, you can flip the tips upright so you know how much you might earn by working their table. The others remain unknown until the bill arrives! At the beginning of each round, you’ll take five Service Markers from your Fortress of Loneliness and place them on the table in front of you with four displaying the logo and the 5th showing a +$1. The round proceeds as follows until all the Service Markers have been placed then the scoring phase begins. 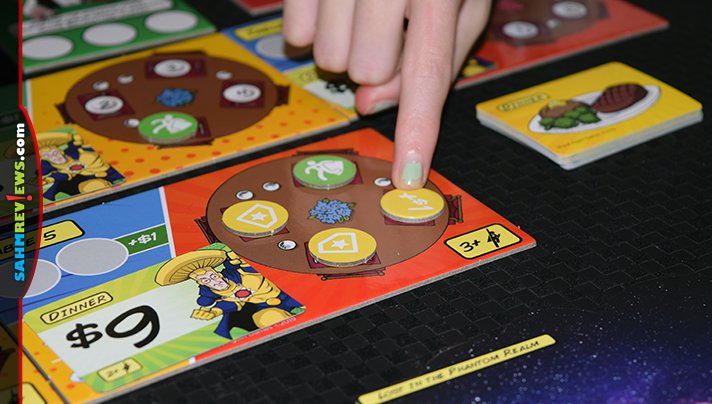 Instead of claiming one of the patrons at the table, you can place a Service Marker on a Staff card. Each offers special abilities so read these at the beginning of the game to make sure you know what they do. They may add money to the table, may allow you to score even when you aren’t in control of the table or rearrange Markers on a table. 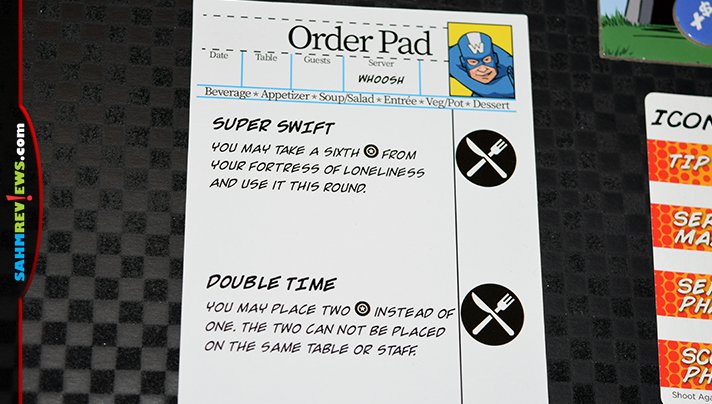 Let’s not forget that these are superheroes trying to land the job. There isn’t anything in the rules of restaurant management that discourages use of super powers. Each player has two abilities and you may use one per round to help you earn those much-desired tips.

After everyone has passed, the scoring phase begins. Only tables that have completed eating are scored. This is determined by whether all the seats are filled or not. If the tip amount isn’t revealed yet, flip the card to show how much is earned. Add any table bonuses that are earned by the size of the table, the Staff increases or player +$1 Markers. The player with the most Service Markers at the table earns the tip for EACH of up to two of their markers. If there’s a tie between players for the number of Markers, then the player with the highest seat placement earns the full tip. Any scored tokens from the winner are moved to the Phantom Realm and out of the game (unless a special power is used to return them to play). Additional players at the table score half of the tip for EACH of their Markers at the table, but instead of going to the Phantom Realm, they’re returned to the player’s Fortress of Loneliness to be used in future rounds. After all tables have been scored, new tips are added to the empty tables.

The game continues with rounds (placing Service Markers then scoring) until closing time. This is determined when there aren’t Dinner Tip Cards available to add to the tables. The final round takes place then scored even if tables are not full. The superhero with the most points earns the job!

You don’t have to be a superhero fanatic to appreciate the intricacies of this game. As long as you’ve eaten out before, you can grasp the jockeying for tips required in the service industry. You can order a copy of Born to Serve from Amazon, direct from Shoot Again Games or at your local retailer. Here’s a tip for you: Find out what Shoot Again Games is serving up in 2020 by visiting their website or following them on Twitter and Facebook.

What odd job would you like to see your favorite superhero take on?