Home / Recreation / Games / Don’t Forget About Those Tweens! They Want to Play Board Games Too! 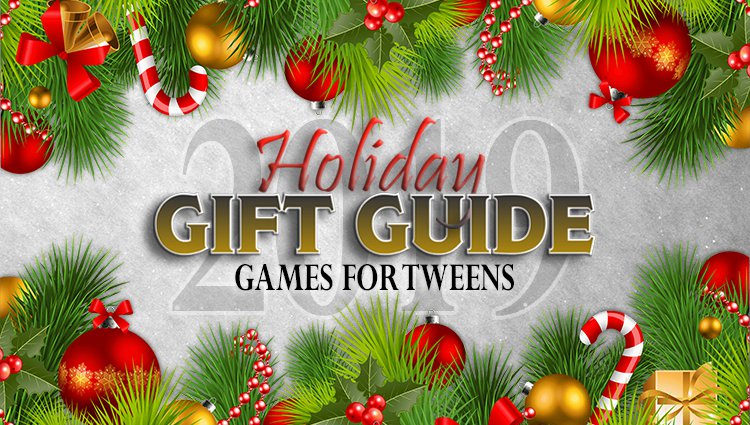 Don’t Forget About Those Tweens! They Want to Play Board Games Too!

We’ve played games since the girls were young so I seldom consider the recommended age on the box. When interviewing a publisher years ago, we were told that the age is determined based on 1) the size of the components and 2) whether a set of instructions could be handed to a child and they could figure it out without assistance from an adult. As such, I look at the theme, the graphics and the mechanism then determine whether my child is mature enough to play it. Kids are smart and we often don’t give them enough credit  The games in this gift guide are examples of ones that are entertaining enough games for teens and adults, but also perfectly acceptable for tweens. So if you find yourself complaining that your tween needs to be more social offline then give some of these as gifts and add a note to the package that says you’ll host a game night for them and a designated number of friends once a week/month/whatever. It’s not just a gift, but an experience they’re sure to remember! 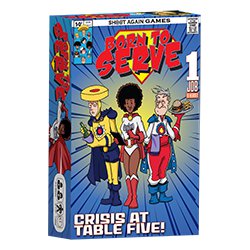 You are a superhero, virtuous, respected and dare we say loved by millions, well ok maybe not millions, but by more than a few people in the little town you and your super group have been tasked with protecting. Unfortunately, the government has cut your group’s funding and that means you all are going to need jobs to support your superhero lifestyle. Sadly, there is but one job to be had in town, at the local restaurant. The restaurant owner has decided to let you all try out for the job and whoever has the most tips by the end of the day gets it. 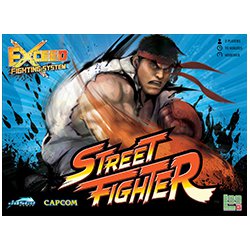 Exceed is a fast paced, head-to-head battle of strategy. Season 3 features the classic characters from Capcom’s Street Fighter. It has twelve characters to choose from so there is a lot of replayability potential. With each character bringing their unique strengths to the table, there is a character for everyone! 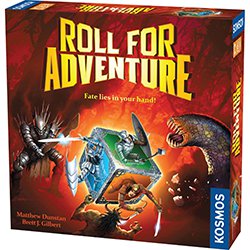 The old kingdom is in danger. Enemy armies are attacking from every direction, sent by the Master of Shadows, who seeks to cast eternal darkness across the land. You must band together to collect the fabled power stones needed to save the kingdom. If you succeed, you’ll save the kingdom and win the game. However, should even one territory fall under the control of the Master of Shadows, you will lose the game immediately. With many heroes, a variable game board, and increasing difficulty, this cooperative dice-rolling fantasy game offers you exciting challenges again and again. 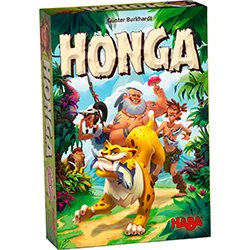 The saber-toothed tiger clan is looking for a new leader! But only the caveman who collects the most supplies, barters successfully, and pays homage to the old nature gods will prove worthy. But don’t forget Honga! Whenever you ignore the local saber-toothed tiger,
he will come and eat your food! And getting rid of him can turn out to be tough. 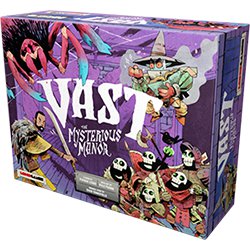 Return to the world of Vast in a whole new stand-alone adventure, Vast: The Mysterious Manor.

Vast takes you and your friends on an adventure in a haunted house, built on total asymmetry. There is no merry band of travelers here fighting evil. In Vast you take control of any part of the story. Play as the pious Paladin, the murderous Skeletons, the awesome Spider, or the Manor itself. In addition there is the Enchanter, come to this world to rule the minds of the others. Each role has its own powers, pieces, and paths to victory…and there can be only one winner. 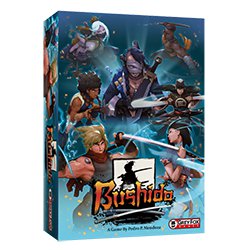 Bushido is a two-player head-to-head board game using a combination of cards and dice. Players will train hard, drafting the techniques they need to win the day. Then they’ll pick a weapon to bring to the fight before entering the dojo for a duel to the death. Timing is everything in Bushido and every move counts. Be careful, because all it takes is one bad misstep to bring things to a quick end. 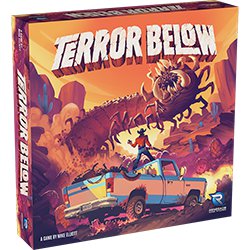 Terror Below is a game of government experiments gone wild in the Nevada desert! Drive around, avoiding attacks by Weapons Of Remote Massacre (W.O.R.M.s) but be warned: the faster you move, the more vibrations you make, attracting the attention of the vicious W.O.R.M.s underground. Navigate the difficult terrain to collect valuable W.O.R.M. Eggs and deliver them to Locations around town to claim bounties. If you’re feeling lucky, collect items and weapons to go hunt ‘em! 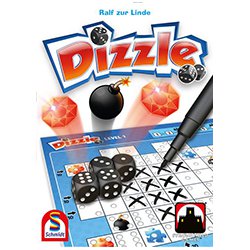 In Dizzle, players want to fill their scorecards with dice collected each round. Players take turns selecting dice from the center of the table, and the next die they collect must match the others. At the end of a round, mark all boxes on your scorecard filled with dice. 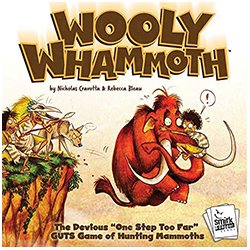 WOOLY WHAMMOTH is a devious game of prehistoric survival, tricking rival tribes into taking a step too far. You are a clan of hungry Cave People attempting to hunt mammoth by chasing them off the edge of a cliff. But, you run the risk of sinking into a tarpit, getting stomped by mammoths or running straight off the cliff yourself in the process. 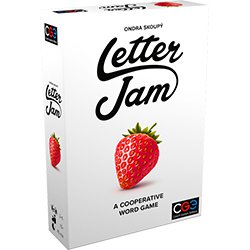 Letter Jam is a cooperative game for 2 to 6 players. In each round, every player has a letter that everyone else can see. But players cannot see their own letter!

Players try to find a word that can be spelled with the letters visible to them to use as a clue. The player with the best clue spells it out by marking each letter with numbered tokens. Your letter’s position in the clue helps you guess what your word might be. Guess all of your letters before time runs out, then unscramble your hidden word! 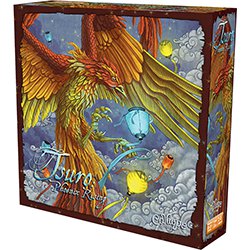 Soar like a phoenix to create new stars in the night sky! Place, flip, and rotate tiles to build your path, navigating the board to reach glowing lanterns. Only the bravest and most clever phoenix will create a new constellation and win! 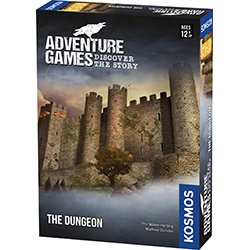 A thrilling Adventure set in either the headquarters of Monochrome Inc (a biotech company with some nasty secrets), or a dungeon (but you cannot remember what brought you there). Similar to a PC adventure game, players have to explore spaces, combine items, find clues, and talk to people. A fascinating story unfolds with each action. Teamwork makes the dream work. This board game has simple rules and ca be played multiple times. There is enough story and contest to play approximately three times with different stores each time.

War of the Worlds

Players will take control of the invading Martians or the defending Humans in a struggle for Earth! A deck-building game for 2 players 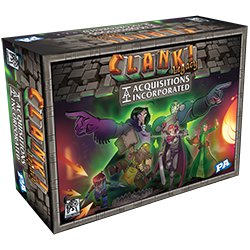 Clank! Legacy Acquisitions Incorporated is the biggest, Clankiest! Clank! you’ve ever experienced! Pesky gremlins, sinister vampires, and a giant dragon all stand between you and the treasure you so rightfully deserve. But you’re not in it alone. In Clank! Legacy: Acquisitions Incorporated, you’re part of the greatest adventuring company in all of the planes – and you may just end up saving the world! 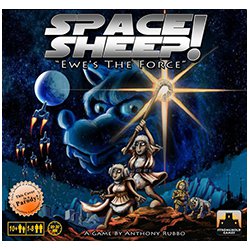 In Space Sheep!, one player acts as the Supreme Flock Commander, managing the one-minute sand timer. If the sand runs out, Wolf attacks and players must discard cards from the Defense Mat, the deck, or their hands; if they can’t, they lose the game. If the Wolf token has been knocked on its side, the Supreme Flock Commander may flip the sand timer before it runs out to avoid the Wolf attack, standing up the Wolf token and moving it to another System in the process. 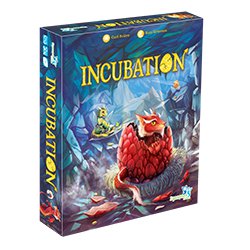 An incredible discovery has been made that will change the world forever. High in the snow-capped mountains, explorers have come across a number of large, colorful dragon eggs! Now the whole world is clamoring to get their hands on what’s inside.

Continue to watch our holiday giveaways where some these up for grabs to SahmReviews’ readers and more are still to come! Still need more gift ideas? Check out our many other guides that have already published! 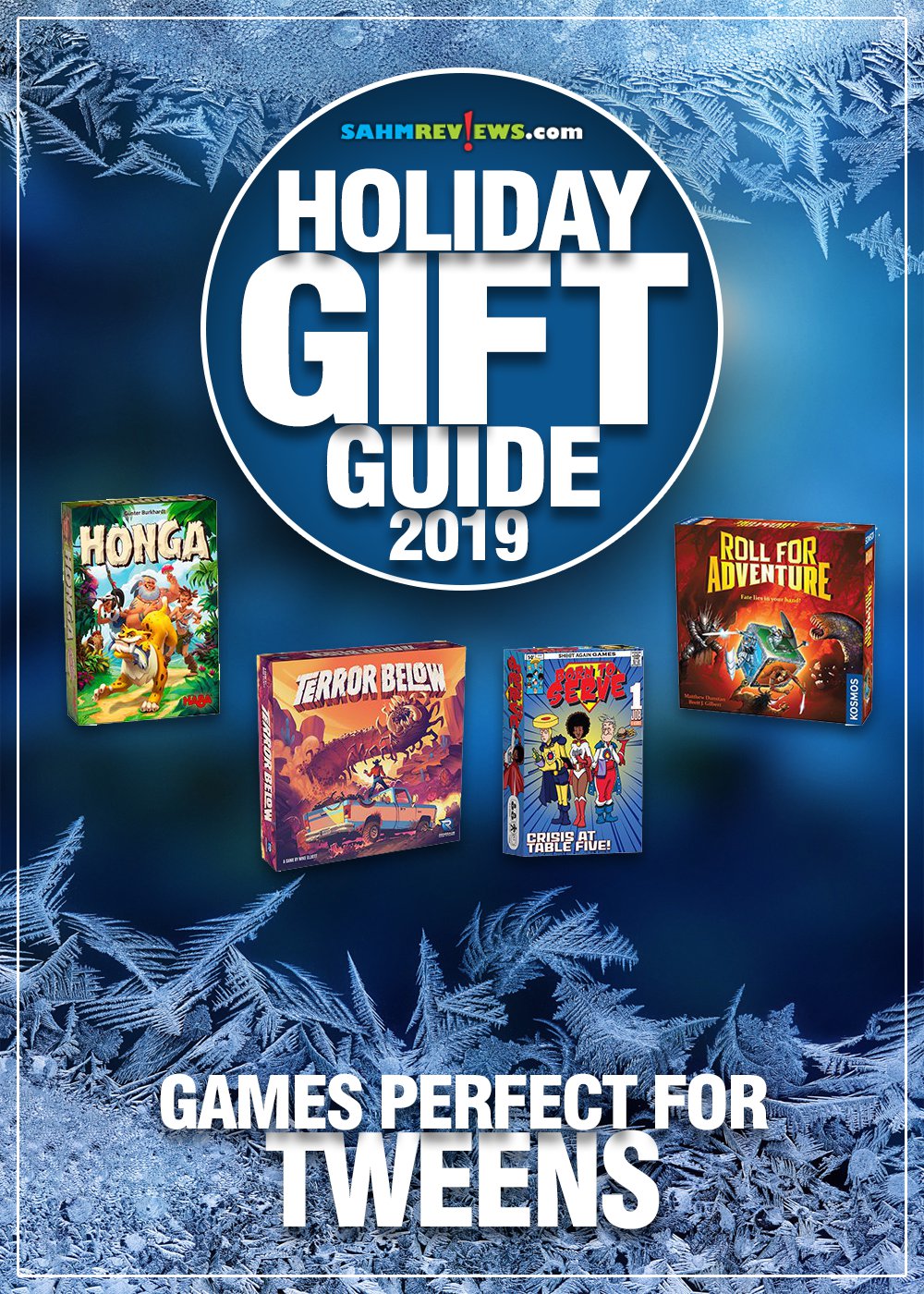 43 comments on «Don’t Forget About Those Tweens! They Want to Play Board Games Too!»