We’re exactly one week away from Christmas and you probably haven’t finished your shopping yet. You can’t blame us – we’ve given you ten amazing lists of gift ideas over the past few weeks. From games to gadgets, toys to toddler items, there is something in our guides for everyone.

logo. Some others didn’t hit the market until the Christmas season and we’re rushing to give you an in-depth overview in time for your purchasing decisions. A good example is Arcane Wonders‘ brand new city-building game, Architectura.

We categorized Architectura as a family game in our gift guides since it supports up to four players and plays in well under an hour. Although publisher-recommended for ages 14+, we know from playing it that it can easily be enjoyed by players as young as 8 or 10. As a side bonus, it incorporates a little bit of math in the form of pre-algebra! 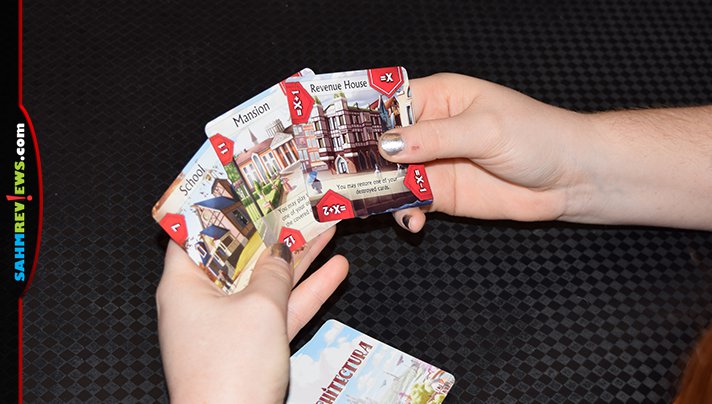 Setting up the play area literally takes under a minute. Deal out the eight block cards into a line in the center of the table. Give each player an identical deck of twelve cards/tiles in their preferred player color along with two color-matching protection tokens. There are additional cards used after you’ve played a few times to turn up the difficulty and variability, but for now those are left in the box. 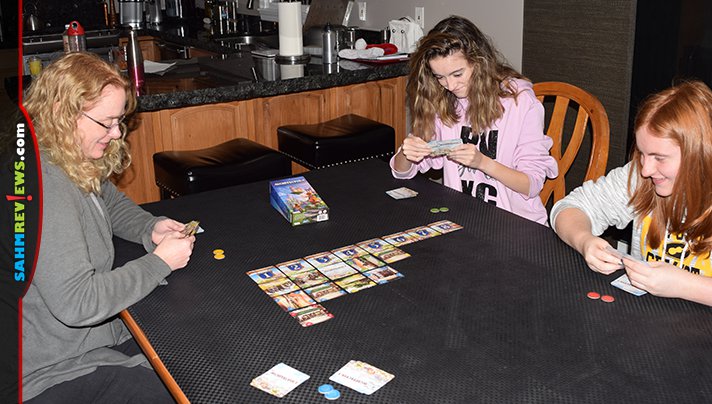 The object of Architectura is to cooperatively build a city comprised of streets (rows) and blocks (columns). Each intersection will contain a building, which is what is depicted on each of the players’ cards. Players shuffle their decks and begin the game with three cards in their hands. On each turn a player will play one of their cards to the city and then draw back up to their hand limit. 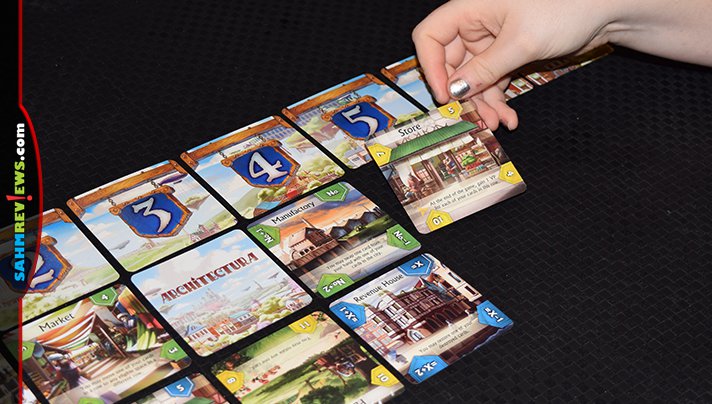 Cards may only be played to an empty space to the right of an occupied space, the first space of a street that has no cards on it yet (the maximum number of rows is equal to the number of players) or a space occupied by a face-down (destroyed) card. When played, a card’s value at the top is compared to the value shown on the previous card in the same row, regardless of color (this is skipped if there is no card or it is facedown). If the newly placed card is at least double the value of the old one, the old card is destroyed and flipped over. If the new card is higher in value, but not more than double, the old card’s value decreases by rotating it 90 degrees counterclockwise (unless it is already at its lowest value). 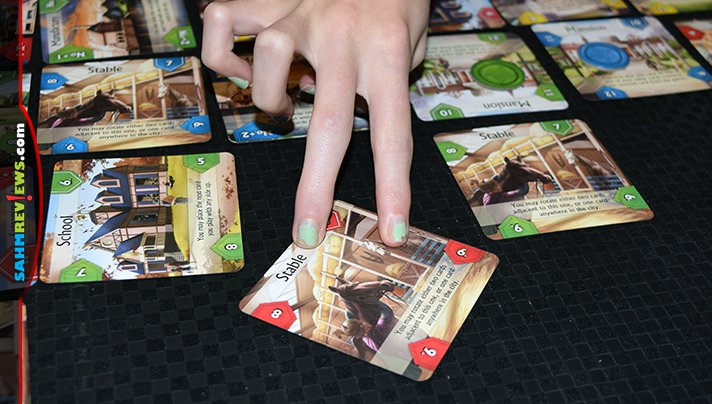 If both cards have an equal value, nothing happens. However, if the old card has a higher value than the new card, its value increases even more by being rotated clockwise 90 degrees! Next, the active player resolves the newly-placed card’s effects. These range from rotating another card, taking another turn or even increasing your hand limit! 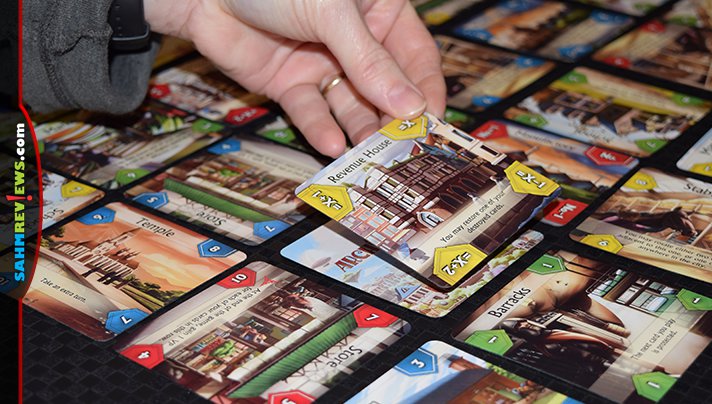 I mentioned before that Architectura had some pre-algebra hidden inside. The values on the cards are not always numerical digits. Sometimes they are represented by a variable. An “X” means to begin with the value of the card immediately before it. For example, if a card says “=X-1”, it will be worth one point less than the card on its left. When that other card changes in value due to rotating, it will directly affect the value of this card as well. In the same manner, the variable “No.” means the card has a value depending upon which block (column) it is built. The number is indicated by the corresponding block cards at the top of the grid. 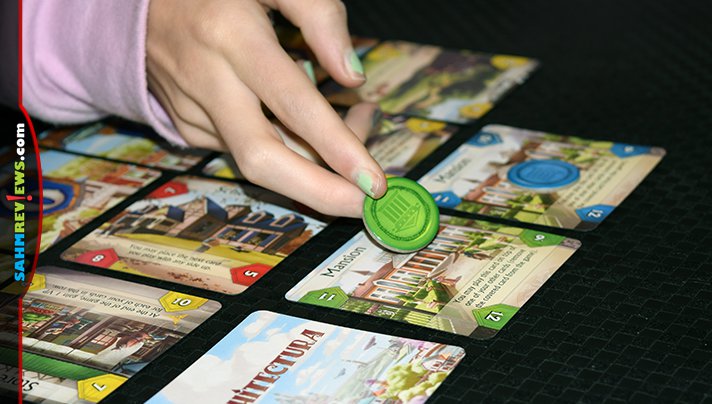 Players take turns placing cards, comparing them to neighboring cards, rotating accordingly and resolving effects until no one can play a card any more. If a player runs out of cards, their game is over until all players exhaust all of their options or no playable space remains. Final scores are calculated by summing up the final resulting numbers at the top of each card and the player with the highest overall total wins Architectura. Ties are broken by the player with the most cards on the table and then by the person with a card of the lowest value in play. 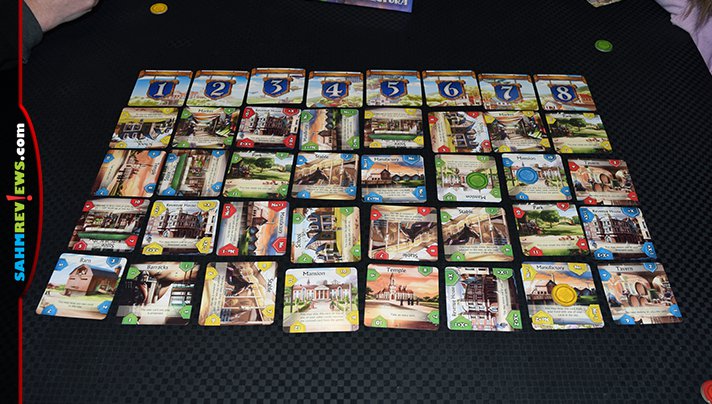 It’s easy to see why this quick, easy-to-learn card game made it into our 2019 Gift Guide to Family Games. You can find copies right now on Amazon and should be available at your local game store very soon (if not already!). If you want to try your luck, we’re giving away a brand new copy of Architectura right now as part of our annual Holiday Giveaway promotion! Go enter now!

And while you’re waiting on your prize, check out Arcane Wonders‘ website for information about a highly-anticipated Kickstarter campaign for Foundations of Rome. Follow them on Facebook and Twitter to find out exactly when it goes live!

Do you have a favorite city-building game?