Our fourth entry into our series about recent games sporting a witch theme is the brand new Approaching Dawn: The Witching Hour by WizKids. So far we’ve talked about one cooperative game (Witches of the Revolution), a historically accurate title about the Salem witch trials (Affliction: Salem 1692) and a competitive game where you can turn villagers into frogs or make them fall in love with a neighbor (The Village Crone). With Approaching Dawn: The Witching Hour we’re circling back around to the cooperative genre with a game about simply surviving the night. 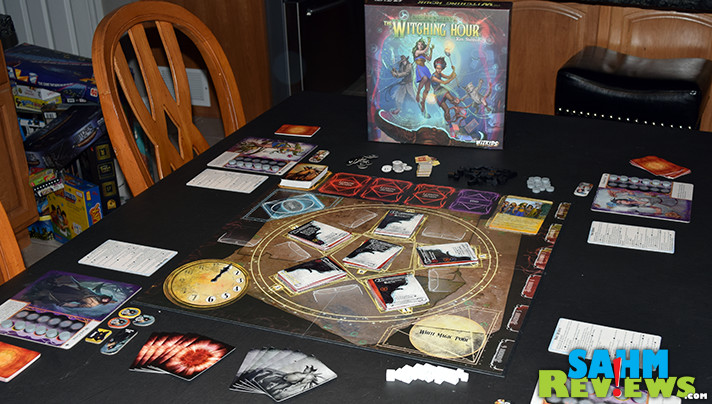 Worth mentioning first, when we sat down to play a round or two of Approaching Dawn: The Witching Hour, our daughters began examining the player boards in order to choose one of the eight possible characters to represent. They both commented on the artwork, preferring it quite a bit over the previous witch-themed games we’ve covered. Most of the witches in Approaching Dawn: The Witching Hour are much younger and drawn in a style reminiscent of a Nancy Drew mystery book or a current episode of Riverdale. This alone made them more interested in playing.

Although Approaching Dawn: The Witching Hour includes a playing board, it is mostly a card-based game. Your team’s goal is to survive the night over a number of rounds, represented by hours on the clock (each round is a game hour). Because it is nighttime, demons will appear that attempt to attack the witches and it is up to you and your teammates to overcome them with magic before they do damage. 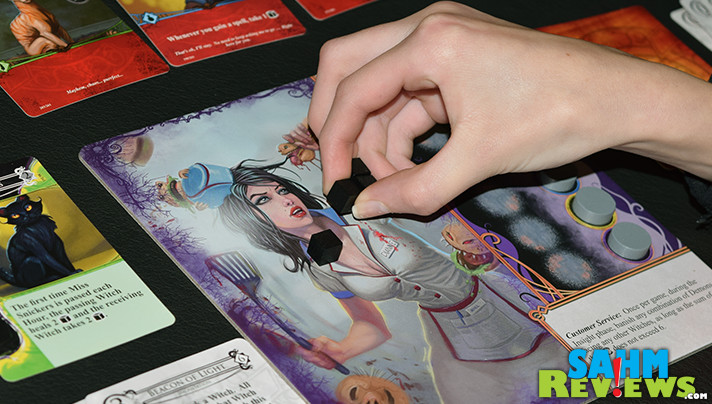 Each player begins the game with a custom deck of eight starter spell cards, of which a hand of five is drawn. The board is randomly populated with spell stacks of increasing power, numbered one through six. A starter demon is also given to each witch, ready to attack. On your turn you may acquire as many of the spells as you wish, limiting your selection to one per stack. However, you will receive corruption cubes equal to the power of the spell to place on your character board. Corruption isn’t good – more on that in a bit. 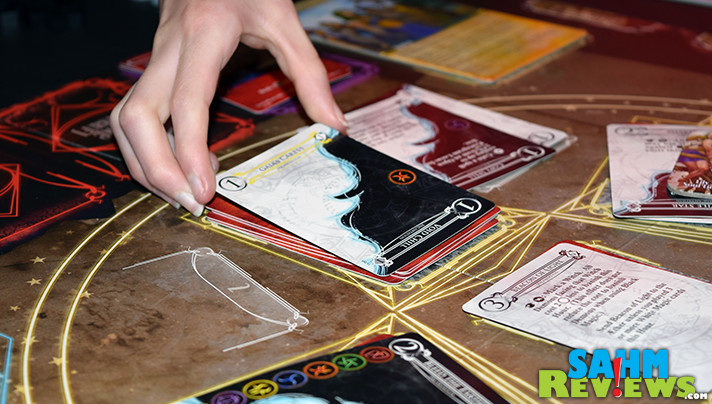 These new cards are placed on top of draw deck and will be available to you on your next turn if you draw them. Once all players have had the opportunity to draw the spells they wish, demons are summoned. Three demon cards are set out and beginning with the starting player, are compared to the corruption level (number of cubes) and the open sigils (these are symbols on your player card that change from round-to-round). If the attack number on the demon’s card is equal or lower than the player’s corruption level, and that player has those sigils open, the demon moves to the player’s area with the starter demon. The player discards corruption cubes (a good thing) equal to the number on the demon and then the next demon card is compared. It is possible to receive up to three demons to each player per round, but if this were to happen, it will be quite a short game. 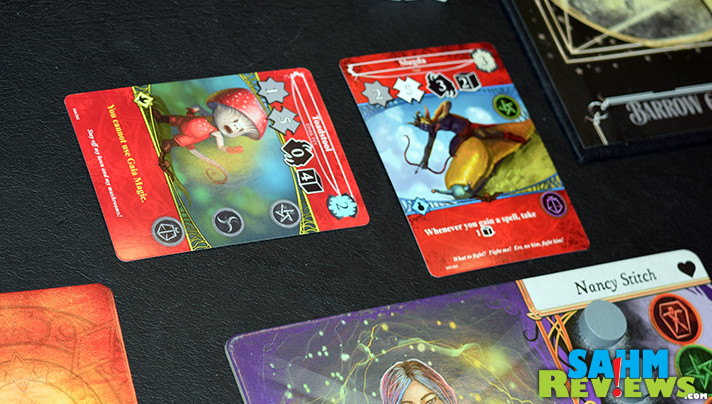 If the demon doesn’t meet the attack criteria, they remain on the board and the area is filled back up to three cards. These are then compared to the next player, and so on until all players have faced the demons. Any demons left on the board are now sent to the void and all player sigils are closed. Now comes the time to do what all witches should be good at – casting spells! 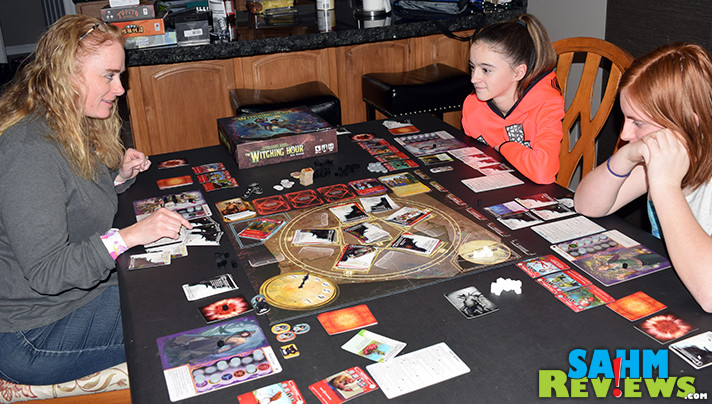 Spells in Approaching Dawn: The Witching Hour are a little different than the other games we’ve mentioned. Your spell cards are dual-use. One half is white, while the other is black. This represents the two schools of magic – black and white! You, and all other witches, must now examine your hand to determine how all of the cards will be played. This is done in secret, without discussing specific cards with each other. 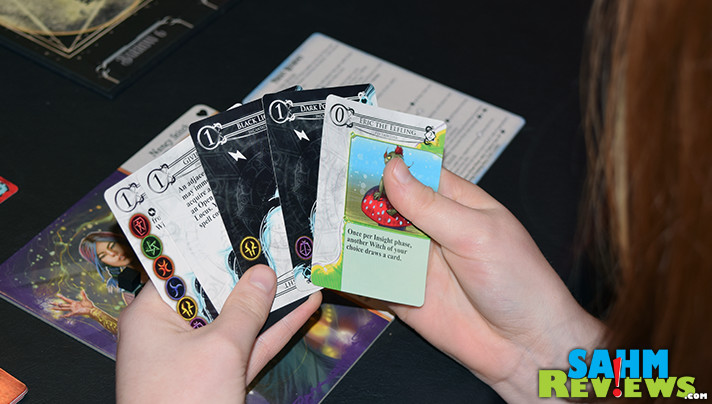 Casting black magic will attack the demons in front of you, allowing you to bind them for a round or completely banish them from the game. As with all bad things, black magic comes with a cost. Not only will they open certain sigils for you, making you more vulnerable to attack next round, an equal amount of corruption is added to the witch to your left for the total amount of black magic you cast! 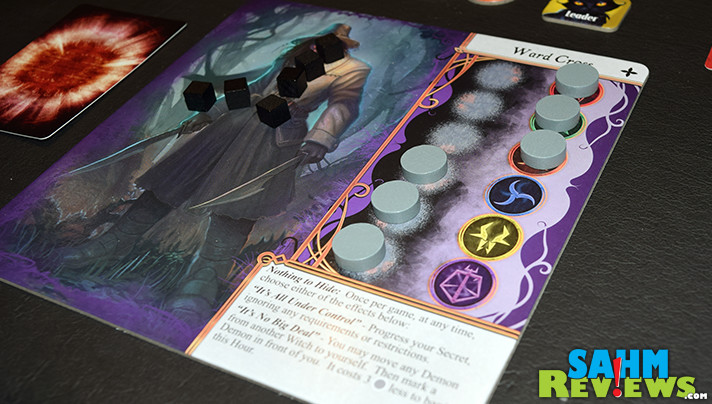 White magic is a bit more helpful, but not to you. Casting white magic usually doesn’t open sigils and allows you to add white magic cubes to the community pool. From there you may use any white magic to bind or banish demons in front of any other player, but not yourself! Ultimately your team is trying to prevent any of the demons from being able to attack this round by temporarily binding them or getting rid of them permanently by banishing. Any that are not addressed attack and add corruption to the defending player AND force the removed of some of the spell cards from the board!

Some spell cards have a cost associated with them to cast, and these cards are removed from your hand permanently as well. As the game progresses, you will be forced to draw more and more spells from the center to replenish your deck. This also means you will be taking on more and more corruption you must deal with. 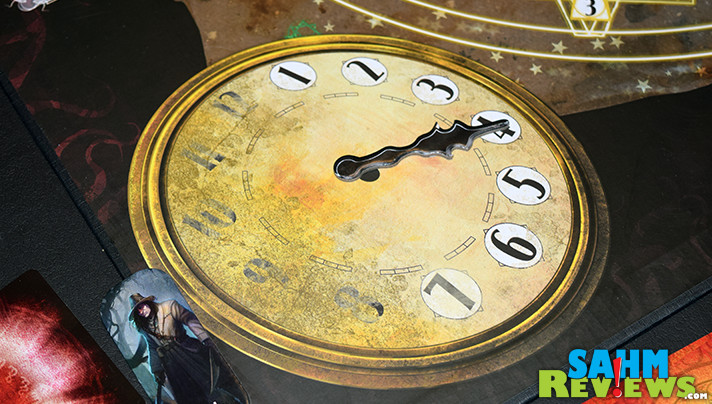 Each witch also has a Secret Card that has goals they want to attain during the game. Depending on the Scene (again, more on that in a second), progressing your secret will award you with special one-time abilities and resolving the entire card might change the rules for the rest of the night. Failure to complete your secret in time will certainly result in some in-game penalties. To prepare for the next round, advance the clock hand by one hour, discard your played cards and draw back up to five.  All bound demons are released, ready to attack you the next round. 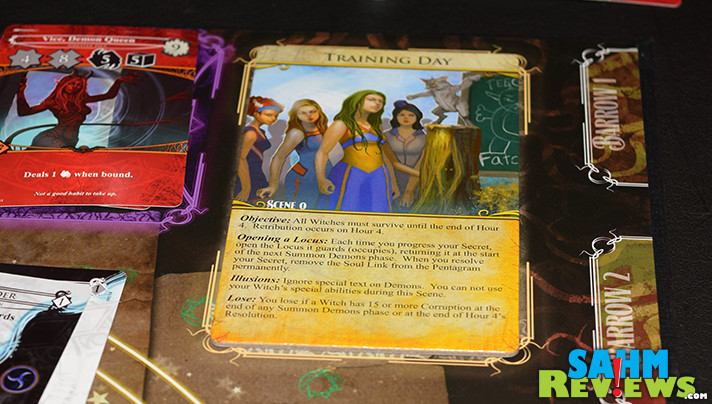 Approaching Dawn: The Witching Hour includes five different Scene cards along with a special starter Scene to be played a couple times before progressing into the harder scenarios. For best results, Approaching Dawn: The Witching Hour is expected to be played in Scene order, which has a continuing story from game to game and features different sets of goals, rules and length. But if you have a preferred scene to play, or it is a particular time of year, you are free to jump in with any scene and play them one-off.

Let us finish by saying this is not an easy game. Not that it’s difficult to learn or play, just one that will not be a cake walk to win. And that’s how we prefer them. With different scenes, multiple characters to choose with their own spells and a randomized spell selection determined by player count, this one will get quite a few plays by us as we try to overcome every scenario. As a bonus, it supports up to six players – something you don’t usually see in a cooperative game!

Copies of Approaching Dawn: The Witching Hour are limited on Amazon right now, but still at a very good discount off the MSRP of $59.99. You may already know WizKids for many of their other games like DiceBot MegaFun, Fantasy Realms or Tournament at Camelot, but they have more. A lot more. Check out their website and peek at their Facebook and Twitter timelines to discover some!

Would you prefer to cast black magic or white magic?