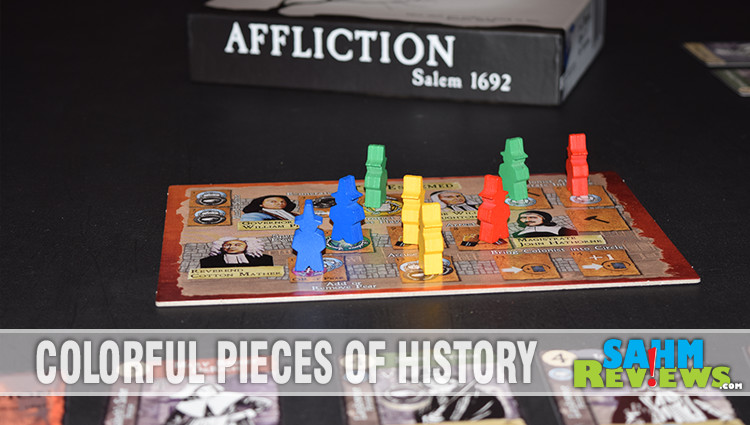 On Tuesday, Scott shared the first of several witch-themed game overviews with an explanation of Witches of the Revolution by Atlas Games. It had us acting as individual covens who are working together using witchcraft to ensure the success of the American Revolution. The game has historical references, but is not historically accurate like 1775 – Rebellion from Academy Games. We’re always interested in finding ways to incorporate games into educational settings because it’s easier to learn about history, science and so much more when it’s not borrrinnng.

At this point, you may be wondering how we’re going to say a game about witches can be educational. Whether you believe in witches or not, the Salem Witch Trials were an extremely real part of American history. See where I’m going with this? Play Affliction: Salem 1692 and you’ll learn about the story, the individuals accused, why/how they were accused and ultimately what put an end to this very sad piece of history. 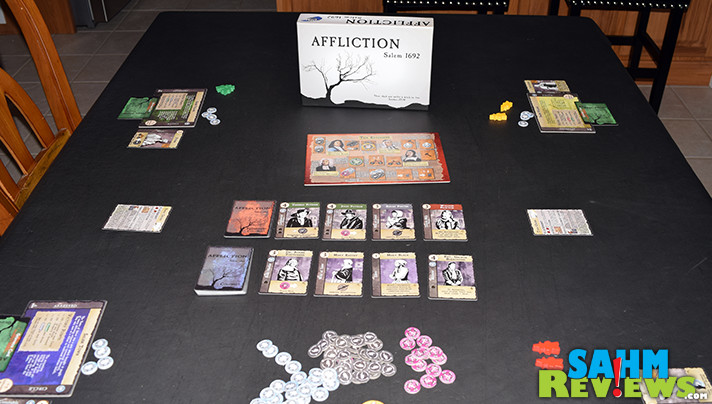 Affliction: Salem 1692 by DPH Games revolves around how the entire situation transpired. Basically, a handful of young girls started acting oddly, having muscle spams and loud outbursts. While modern society would find a medical condition for these symptoms, people of 1692 took a different approach and claimed to be possessed by the devil. These young women became known as “The Afflicted” and their accusations of being afflicted by witchcraft meant a death sentence for so many and imprisonment of many more. As it turns out, the accused were some of the same people who had been amidst land and property disputes and there were beliefs that the situation was magnified by these tensions. Mass hysteria ensued on the basis of fear and spectral evidence. People who defended them were accused as well and it snowballed for just over a year with women, men and even children being accused. Land owners were accused. Homeless people were accused. Indentured servants were accused. Government officials were accused. Outcasts were accused. Clergy members were accused. It seemed that nobody was safe until they took aim at the wife of the governor when he recognized the ill impacts of mass hysteria and immediately shut down the proceedings. These different aspects are represented in the game as actions, tokens or colonist cards. 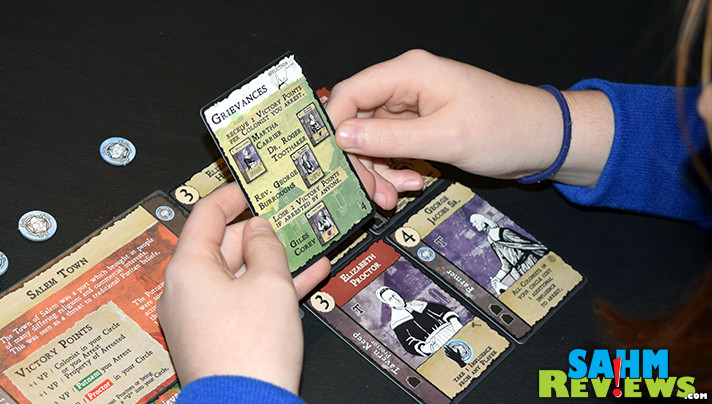 At the beginning of the game, each player selects a faction and takes the related messenger meeples. A random starting colonist and random grievance card is given to each player. The colonist is placed next to the faction card starting your circle of influence while the grievance card containing end game goals is kept secret. The Esteemed board is placed in the center of the table with four Prominent Colonists (red cards) placed face-up and the draw deck next to it. The cards depicting Mary Spencer Hill (that’s the Governor’s wife) and Increase Mather (President of Harvard) are randomly mixed with 6 of the blue Colonist cards and placed on the bottom of the blue draw deck then four face-up blue Colonist cards and the blue draw deck are placed below the Prominent Colonists. 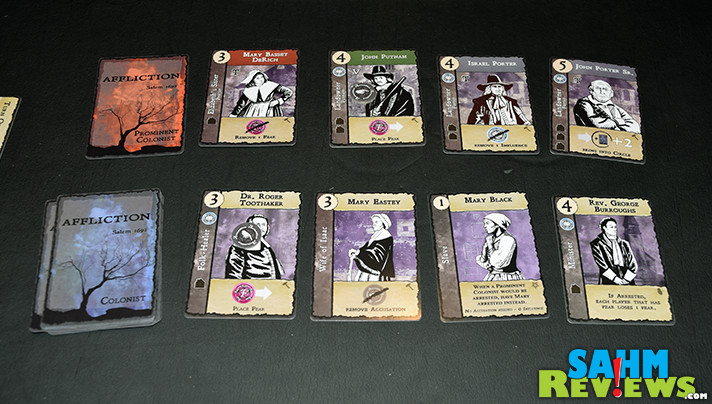 Prominent Colonists belong to one of three key families (Proctor, Porter and Putnam) while regular Colonists such as ministers, merchants, physicians, slaves, soldiers, etc.) are neutral parties and not bound to a particular family. Depending on your faction, these are the people you’ll either be recruiting or arresting! All Colonist cards display that person’s reputation level, whether they are able to generate influence, their faction, how much property they own (if any) as well as any abilities they may have. 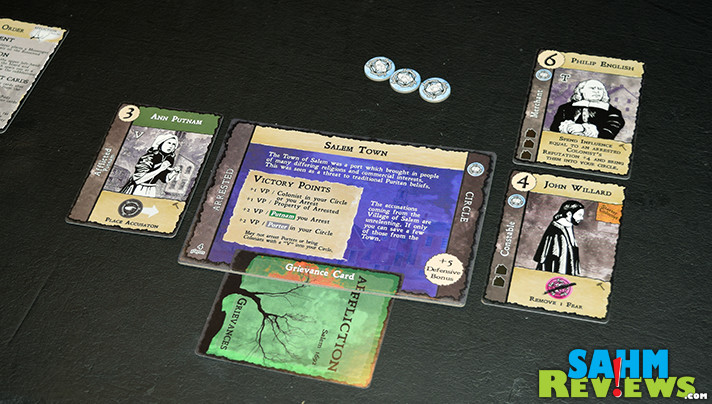 Your goals are stated on your individual faction card which publicly displays the amount of victory points you’ll earn for recruiting specific individuals into your circle and arresting others. You’ll also earn victory points for gaining access to the property owned by those you arrest. In addition, you’ll be working secretly to earn the victory points based on the Grievance Card you randomly received during game setup.

But people didn’t just all of a sudden get arrested and accused in Salem for no reason. There was a buildup of fear and tension as well as influence. The same holds true in the the game. In order to arrest or recruit someone, you’ll need to have influence. To bolster the hysteria, you’ll want to generate fear (or remove it if it’s on one of your colonists!) It takes actions to protect, exonerate, arrest or recruit a colonist. All these are represented on The Esteemed board and each round you’ll be able to take a maximum of two actions. Beginning with the starting player, you place a messenger on the corresponding action space on The Esteemed board which will be resolved from the top left (#1 space) to the bottom right (#14 space). I’m not going to explain every action in detail because that’s what the rule book is for, but essentially it will take more than a couple rounds to start really feeling like you’re making progress. You’ll take the action as you remove your meeple from the board and when everyone has taken their actions, the round is over. 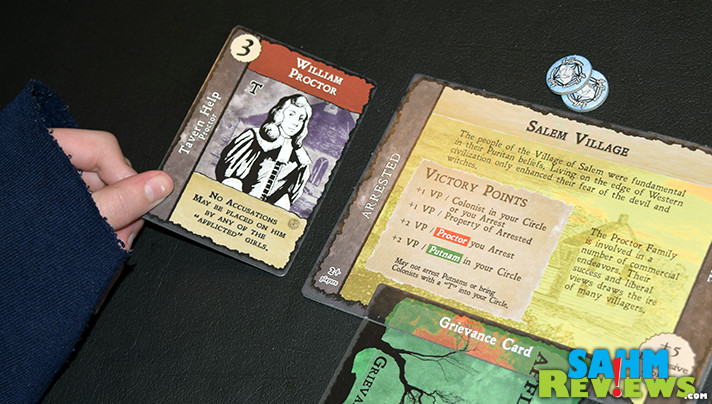 Ultimately, you’re working to build an engine utilizing the abilities within your circle of influence. Each time you recruit someone into your circle, they have potential to add influence to your circle as well as provide special abilities. You’ll gain enough influence to make accusations and arrest people. At the end of each round, the rows of colonist cards are updated. An empty space in the Prominent Colonist (red) row is filled from the draw deck. With the regular colonist (blue) row, cards are shifted to the right and empty spaces are filled from the top of the draw deck. If nobody has been recruited, the rightmost colonist is added to the bottom of the deck (which means it’s out of the game), cards are shifted right and a new card added to the row.

So you may be wondering how many rounds take place. Remember those two colonist cards (Mary Spencer Hill and Increase Mather) we randomly mixed into the bottom of the deck? Those signify an immediate end to the game. Once this happens, victory points are immediately calculated based on faction card goals and Grievance Card goals.

While I knew the basics of the Salem Witch Trials, I learned a great amount of detail as a result of this game. If you’re ready to learn more about this phase of Colonial History, you can pick up a copy of the Affliction: Salem 1692 on Amazon or direct from DPH Games. Check out the other magic in the works by following DPH Games on Facebook and Twitter.

Did you remember studying the Salem Witch Trials in school?