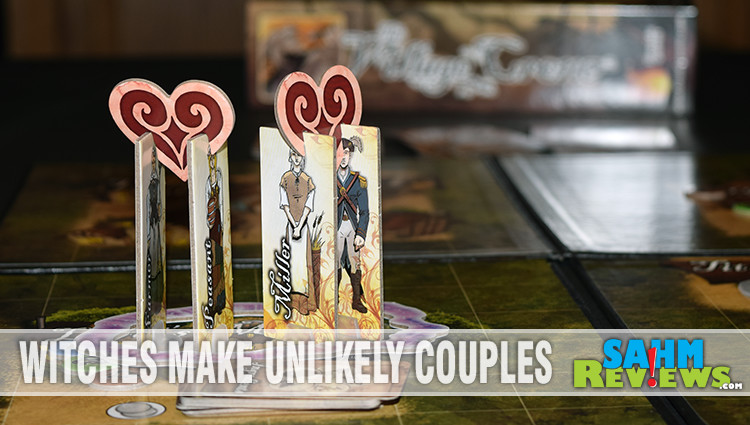 The Village Crone Board Game Overview

By now you are well on your way to becoming well-versed in all things witches. At least when it comes to games. Earlier this week we started out with the almost-historically-accurate cooperative game, Witches of the Revolution. Our second witch-themed title was Affliction: Salem 1692, a worker placement/engine building game set during the Salem Witch Trials. We certainly learned quite a few things about society during the late 17th century.

For the third entry into our all-things-witches series, we chose a popular title that has actually been out for a couple years, but was new to us. The Village Crone by Fireside Games also offered some unique game mechanics not seen in our other witch-themed games. 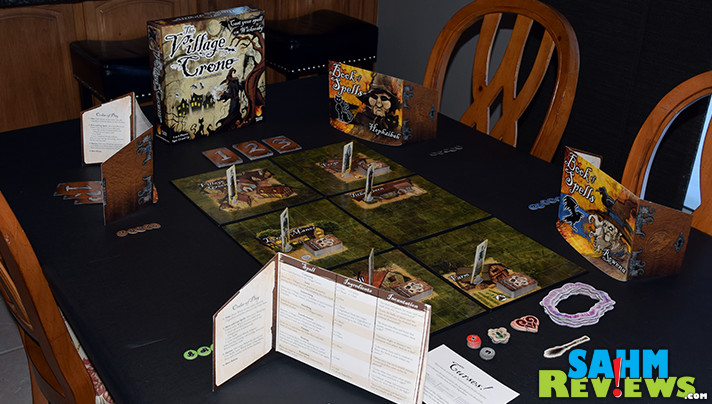 In The Village Crone, you become a witch during the medieval times and are vying to become The Village Crone over the world of Wickersby. You are not the only witch with their eyes on the title, so you must accomplish your goals while preventing the other witches from obtaining theirs. 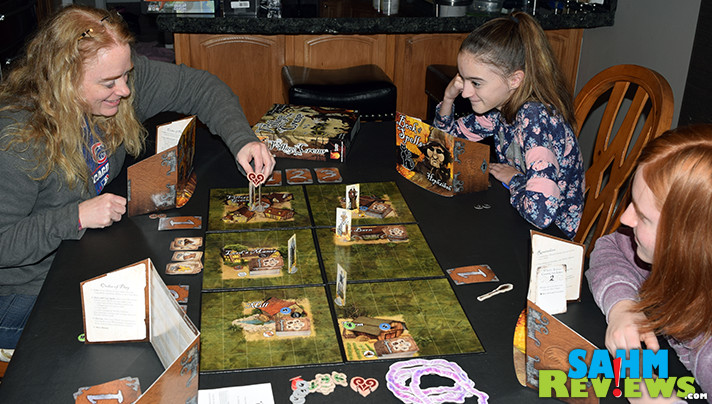 Six modular boards make up the playing area and can be laid out in any configuration you wish as long as each tile is connected to another by at least one orthogonal square. This means you have a virtually unlimited number of “maps” to play on with varying levels of difficulty. 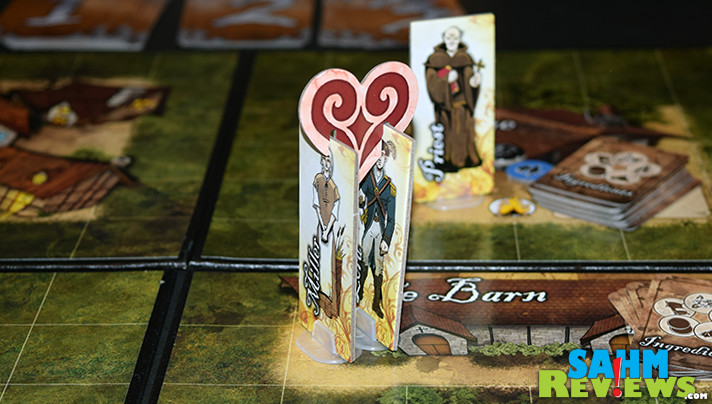 Cardboard standees represent the local villagers who each begin in their associated section (farmer on the farm, blacksmith in the forge, etc.). Each witch receives a spellbook in the form of a privacy shield, three Familiar tokens and three randomly-dealt Scheme cards. The player whose birthday is closest to Halloween without going past is given the Broom token, signifying starting player. 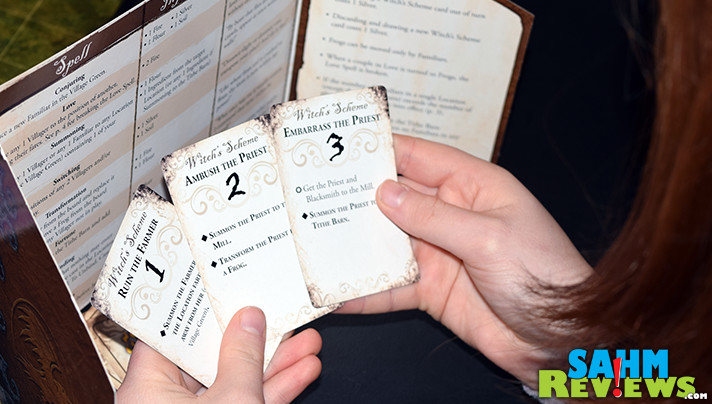 The three Scheme cards have varying tasks or events that must be accomplished in order to complete them. The higher the number on the card, the more points it is worth. Of course, this also means it is more difficult to accomplish. You will always have three cards to work on, and the first player to complete enough Scheme cards to total thirteen points or more wins The Village Crone. 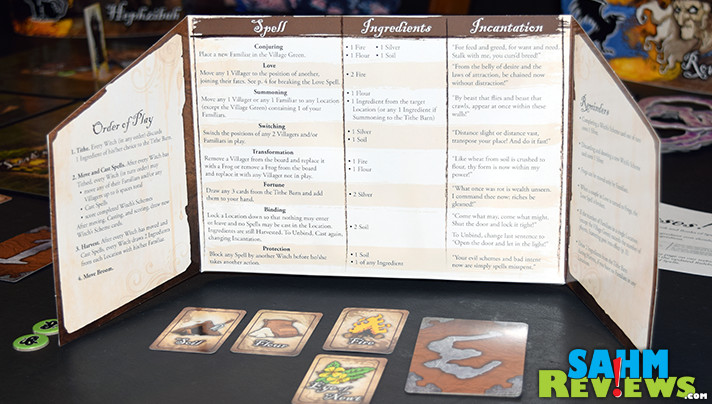 Each witch gets to place their Familiar tokens on the board in varying places. These will award spell ingredients once per round. All spells are listed in each witch’s spellbook and are identical to each other. On your turn you will perform a number of actions before moving on to the next player. 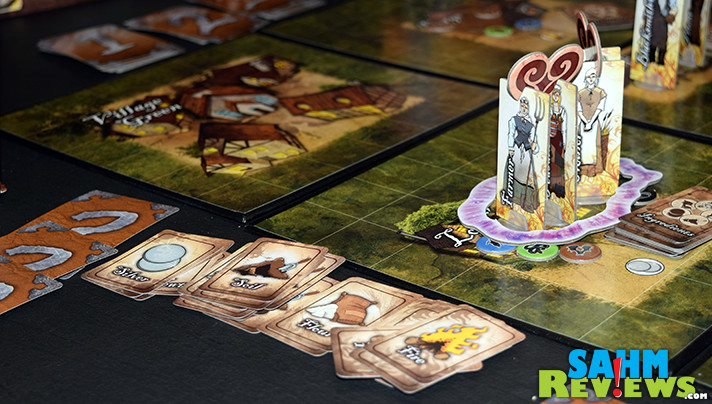 First you will tithe an ingredient to the village by choosing one of your cards and placing it in the Tithe Barn. Next you will move the Villagers or your Familiars (or both) up to six orthogonal spaces. You’ll want to move your Familiars to the areas that award the correct ingredients for your spells, and Villagers may need to be moved to fulfill the requirements of your Schemes. At any time you may also cast spells by spending the appropriate ingredients and saying the listed incantation. These spells might transport Villagers from one area to another, make them fall in love with each other, summon new Familiars to assist you or even turn Villagers into frogs! 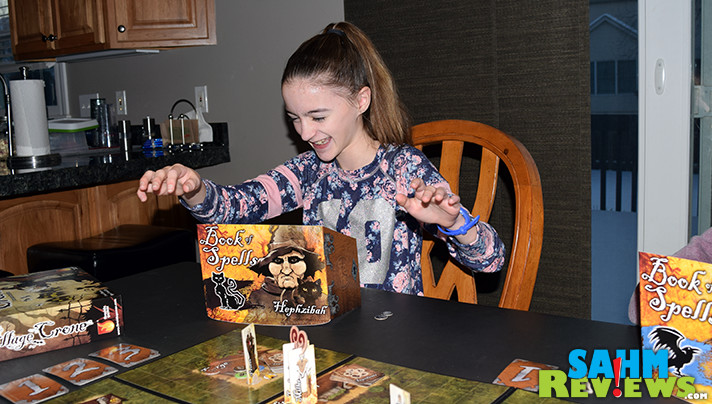 By casting the correct spells, if you are able to create the event listed on your Scheme card, it is considered complete. Some cards might ask you to get a certain villager to a different part of the town, another will encourage a relationship between two of the villagers. One might even ask you to bind an entire area by casting a spell that prevents anyone from entering or leaving!  And what would a witch game be without frogs? Many of the schemes have you chasing down and turning unsuspecting villagers into amphibians, rendering them useless until turned back into human form.

If you believe you’ve completed all the requirement on your Scheme card, reveal it to the other players for verification and place it face down in an area where other players may see your score. You may complete as many of your Scheme cards on a turn as possible and then will draw back up to three at the end of your turn. Again, the first witch to complete Schemes totaling 13 points is crowned as The Village Crone.

The Village Crone supports up to six witches and has special rules if you want to play the game solo. Expect a round to last around 90 minutes, and although listed for ages 13+, could easily be enjoyed by budding spellcasters as young as 8 or 9. Copies are readily available on Amazon for well under the $50 MSRP ($18 at the time of this article)!

You probably already know about Fireside Games and their amazingly popular Castle Panic line of games. Make sure you are following them on Facebook and Twitter to see what they have in store for 2018 – I know we’re anxious to find out ourselves!

Have you ever played a witch-themed game before?

8 comments on «The Village Crone Board Game Overview»