We’re starting off the week with a continuation of our witch-themed game-a-thon. Scott provided an overview of Witches of the Revolution as well as details on The Village Crone while I shared how excited I was to use Affliction: Salem 1692 to learn about the Salem Witch Trials. As I’ve said before, history was not my strong suit so when I know there are ways to use games for teaching, I make sure to tell every teacher I know.

As most teachers will probably agree, one example to support your position is good but two examples are better. With that said, we’re revisiting Salem again but this time instead of causing mass hysteria and fear, we’re taking a more deductive approach to figuring out who the witches are. Salem by Passport Game Studios has us asking questions and analyzing answers. What a novel approach to solving a mystery.

You may recall how much I enjoy games like Alchemists, Purrrlock Holmes, Hanabi and Codenames that require skills of deduction. Any kind of puzzle-style or escape room game is of interest to me – whether it is cooperative or competitive. Salem falls smack into the category of a competitive, deductive reasoning game. While you can play it with as few as three people, I strongly discourage it. You’ll want a full compliment of 6 or 7 people for this one! 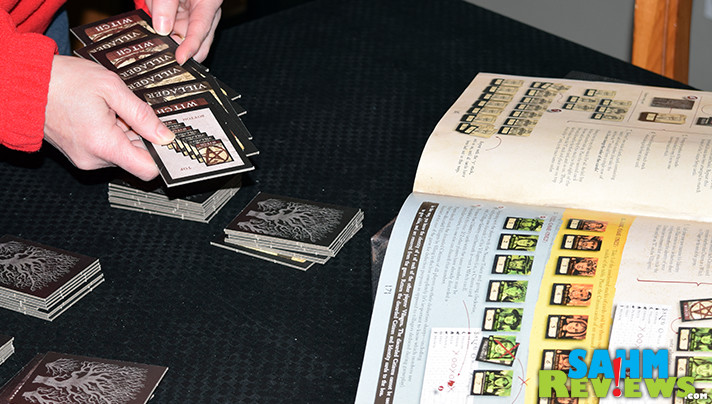 Salem consists of seven factions of people, designated by their color. There is a basic way to play as well as a more advanced way to play, but the setup is similar in both. Each player selects a color then using the setup cards, the witches and villager identities are randomized. The setup cards ensure that each player starts the game with 7 individuals (numbered 1-7) that consists of exactly 3 witches and 4 villagers of their own color. Each player will have only one witch in common with each opponent. This is imperative to know and the first clue to helping decipher who the witches are! If you are playing without a full compliment of players (6 in the basic game, 7 in the more advanced) then you’ll need to follow special setup rules to divide the additional colors randomly among the players. This modification is less than ideal which is why it’s so crucial to be playing at capacity. 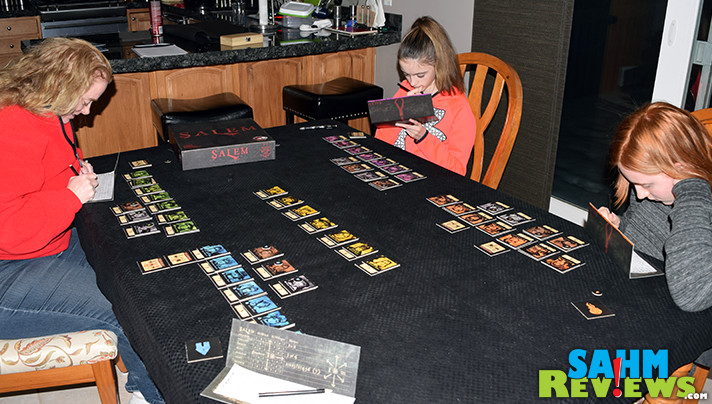 Both the basic game and the advanced game step through the process of determining which individuals are villagers and which are witches. (Ha! Say that 10 times, fast.) In the base game, each player (up to 6) is responsible for their own faction while trying to decipher the identities of a 7th faction that is located in the center of the table. Players take turns asking questions. When all players have recorded the answers they received, play moves clockwise. With some deduction games, deceit is part of the process for throwing opponents off the trail, but in Salem, it’s necessary for all players to be truthful with their alibis. When they are presented a question, they select one of their available alibis and offer an accurate answer. More on that in a minute. In the advanced “full” game, there are additional steps to the process. Turn order is determined by who was most recently accused (asked a question) and it takes place over the course of four rounds which each contain three phases. (1) A witch hunt (the question/answer process similar to the basic game), (2) The Witch Trial (voting process to determine who the witches might be) and (3) The Hangings (analyzing the votes and turning accusations into death sentences.)

So let’s talk about those alibis. When you are asked a question about a character, you have three options for alibis. One alibi is to claim “Treachery” and say that the accused Citizen is the same as another but not identify if it’s a Witch or a Villager. Another option is the alibi of “Slander” in which you say the accused Citizen is not the same as another. This means one is a Villager and the other a Witch. The third alibi is “Hearsay”. You’ll select three Citizens with one being the accused. You’ll indicate how many of the three are Witches. This provides a great deal of information, especially when combined with information already provided! Two things to note about alibis is that you must always provide (1) unique combinations that haven’t been provided in previous rounds and (2) you can only use each type once before using the same one again. In other words, the information you provide needs to add value to the deduction process. If in a previous round, someone accused Citizen 1 and you claimed Treachery and compared to Citizen 4. If in future rounds, Citizen 4 is accused, you cannot compare to Citizen 1 as you’ve already done this. 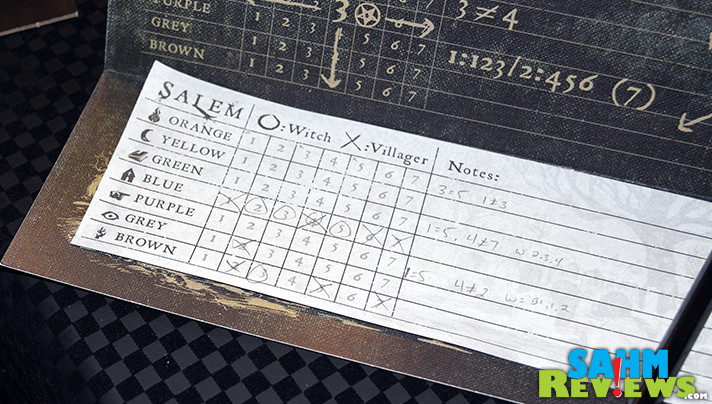 As you can see, it’s like a logic puzzle where you’re working to eliminate as much as possible until you can positively identify the witches. In the basic game, once you’ve determined who the neutral faction witches are, you add your token to the first available person to signify you believe you’ve solved it. Once more than half of the players have figured it out, the game ends. If the first player was correct with their deductions, that player wins. 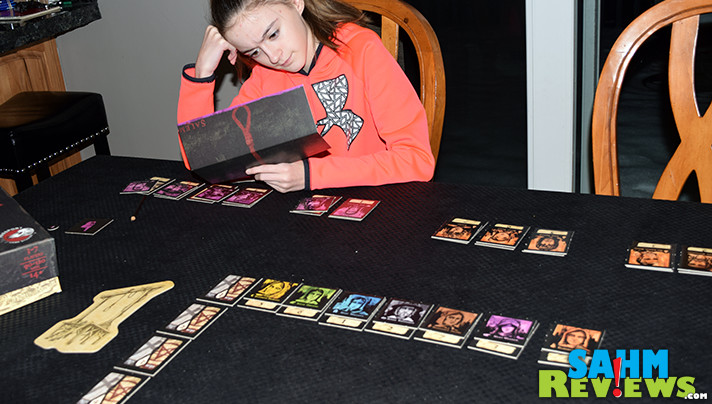 As I mentioned before, the “full” advanced game is a bit more complicated since there isn’t a neutral faction. Each round beings with a Witch Hunt phase. A person is accused and they provide an alibi. The process continues until one person from each faction has been accused and has been given an opportunity to provide an alibi. When the Witch Hunt is over, it comes time for the Trial phase. You’ll select a card that provides the identity of your citizen and secretly add it to the gallows board. One random card is also added. The cards are revealed and you’ll know (within one) how many of the accused individuals are witches and how many are villagers. Tokens are added to the round marker for use in deducing the information in future rounds. Finally, everyone uses their Accusation cards and selects which colors they believe are witches. Don’t worry, you can’t throw your own witch under the bus. You’ll use a bluff card if you have a witch in jail! Anyone who has received an accusation is hanged. Each time you hung a villager or failed to identify a witch, your token is added to the gallows scoreboard. The person who made the least errors in their deduction process will be the winner.

Let’s step backwards for a minute to discuss the educational aspect of Salem. The rulebook offers an excellent historical overview of the people involved but each card displays text explaining each villager. Reading the profiles wasn’t necessary to the gameplay, but if you want to learn more about the individuals in Salem Witch Trials, this is how you would do it. Regardless whether or not you include the backstory details, the logic needed to determine the results makes it valuable for an educational setting. With hints of Sudoku crossed with a logic puzzle, it’s simply fun to play. It’s a little bit of an adrenaline rush when you hear opponents mutter “ahhh” as they figure something out!

Considering the number of people Salem accommodates, it’s a great addition to any game library. You can pick up a copy of Salem on Amazon or from your local retailer that specializes in games. You can learn more about Salem and other titles on Passport Game Studios’ website. Follow them on Facebook and Twitter to hear more about news, releases and promotions.

Do you enjoy games of deduction?