Quite a few years ago when we were looking for games that offered more than what you’d find at your local Walmart, we popped into a small game store in Huntsville, AL. It was exactly what you’d imagine – a dark and dusty retail store with shelves filled with board games, RPG miniatures, paints, Magic cards and much more. One guy, presumably the owner, sat behind a glass case playing an online game on his laptop. It was mid-week during the day and no one else was around.

Nicole and I had played a few non-traditional board games and now we were looking for something we could enjoy with the girls, who had recently shown interest. They were still in elementary school and many of the games we would play with our game group didn’t have the theme or difficulty level we were looking for when considering something for them. After consulting with the store owner, we decided on a copy of Munchkin by Steve Jackson Games. It had been out for nearly a decade and was still being made – must be a good one, right? 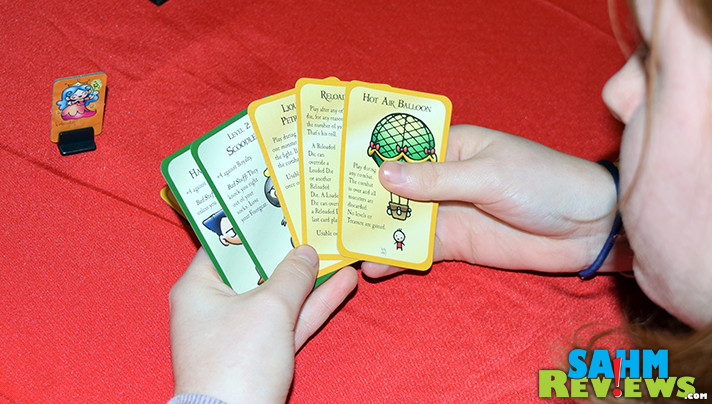 And it was. Munchkin is a card game where everyone is trying to prove themselves the best fighter by defeating more difficult monsters, sometimes recruiting other players to help in their demise. Each player begins the game at level one and places their character card in front of them. There are two decks included in Munchkin, a Door deck and a Treasure deck. Four cards from each deck are dealt to each player, with the rest put in the center of the table within easy reach of everyone. 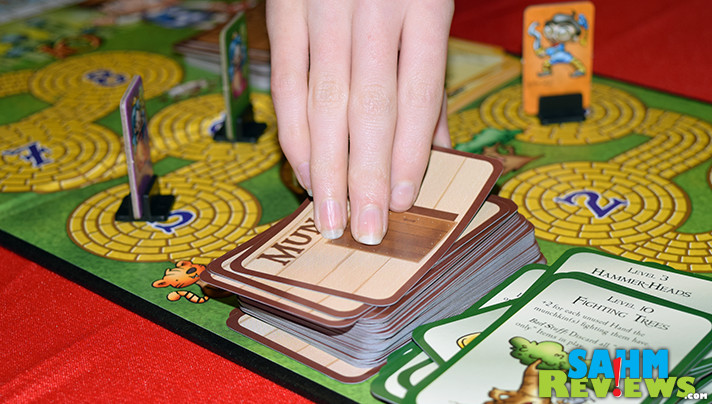 On your turn you will simply turn over one of the Door cards from the top of the Door deck. You may get a curse, which is applied to your character immediately, or a monster that you must fight. The battle is simple – if you are of equal or higher level than the monster you are facing, you win. If not, you may ask other players to submit cards to help you in the battle. If you cannot, the resulting penalty is losing a level, some equipment or both!

In order to convince other players that it is in their best interest to assist you, you must make it worth their while. The game allows for nearly unrestricted negotiations (“you promise to help me on the next battle” or “if I help, I get all the treasure”). Defeating the monster causes your character to level up to the next level and draw the number of treasure cards shown on the monster’s card. These might give you extra armor to defend yourself or powerful weapons to make winning your next battle easier. Each character is limited to how many extra pieces of equipment they can wield at a time, so careful planning is in order. 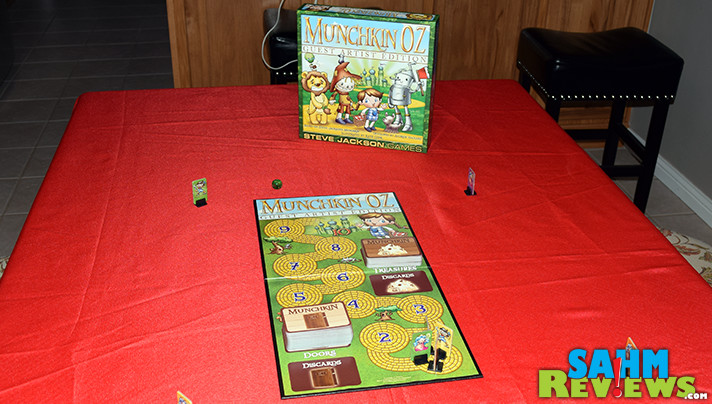 The first player to get their character to level 10 wins Munchkin. The original game saw so much success that it has spawned an almost uncountable number of follow-up issues. Some expand on the base game while others introduce the characters to different theme settings like outer space and the world of Shakespeare. That’s where today’s game feature falls, and conveniently the last in our series about witch-themed games – Munchkin Oz: Guest Artist Edition. 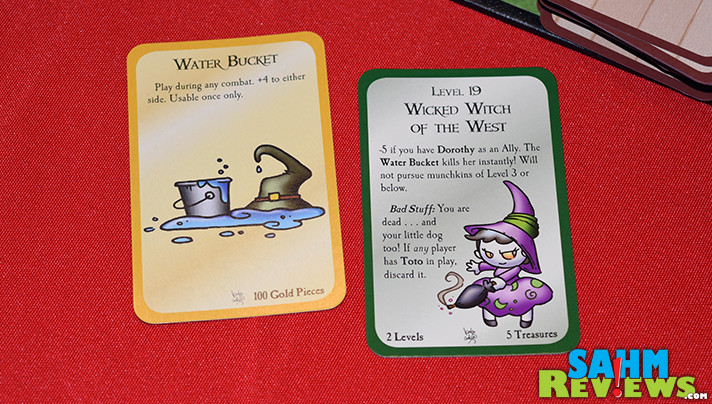 When you think of The Wizard of Oz, one of the first things to come to mind is the Wicked Witch of the West (and the East). There aren’t many witches more famous than those two, and you get to face off against them in this Oz-themed title! It also makes this game the perfect finale in our series of witch-themed board games! 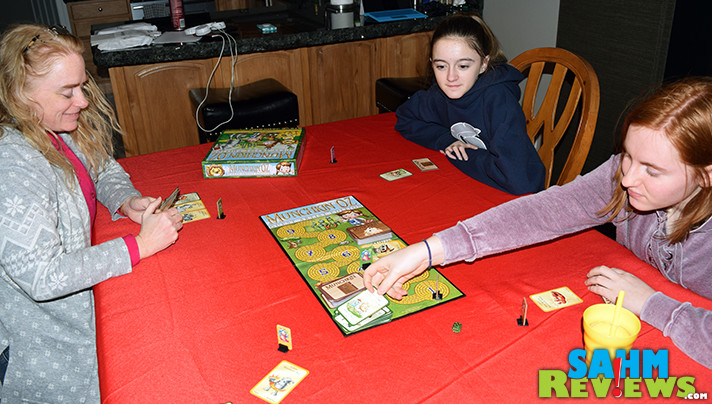 If you already know how to play Munchkin, or paid close attention to our description above, then you already know how to play Munchkin Oz. You’ll do the same thing each turn, knock down a door by drawing a Door card and seeing what is behind it. This time you’ll recognize familiar monsters in addition to the witches like Gwig or the Flying Monkeys. But you’ll also run across powerful allies such as Toto, the Scarecrow or even the Wizard of Oz himself! These will all add bonuses to your current level, allowing you to defeat enemies much higher than you. 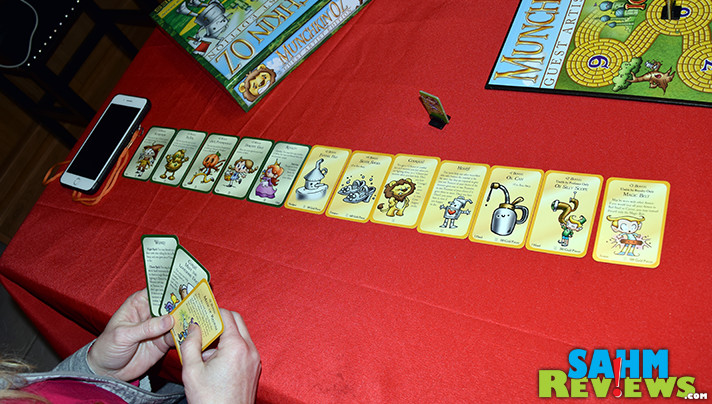 Treasures are also themed from the world of Oz. Along the way you might find Dorothy’s parasol, the Tinman’s funnel hat or even a yellow brick from that famous road by the same name! And just as in the original version of Munchkin, the first player to get to level 10 on the included board, wins Munchkin Oz: Guest Artist Edition. 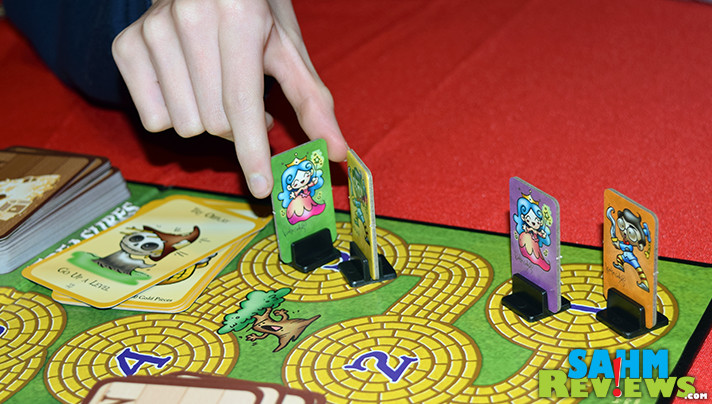 So what’s with the Guest Artist Edition moniker? Starting in 2016, Steve Jackson Games began reissuing some of their most popular Munchkin titles and hired known game industry artists to reimagine and reillustrate the entire game, applying their unique style. Munchkin Oz is one of over a dozen Munchkin titles to have already received the Guest Artist treatment, with more planned for the future! This one was illustrated by Katie Cook, who has even created Garbage Pail Kids for Topps!

You might expect these special editions to run a lot more than the regular versions, but happily that isn’t the case. You can find Munchkin Oz: Guest Artist Edition on Amazon for under $25 shipped or at your local hobby game store. We would expect to see more Munchkin games in the future (along with Guest Artist Editions), so if you want to know what’s up next, be sure to catch Steve Jackson Games‘ Facebook and Twitter feeds to be the first to know!

Have you ever played Munchkin? Which version?