It was a long time ago when Battlebots first made its way to the television airwaves. It was a time before we had kids and a show ahead of its time. Before reality shows went big, before LEGO Robotics had a stronghold in all the schools and far before STEM became a household name. It was a geek’s take on competitive sports. Scott and I enjoyed it so much that we even purchased all the original action figures. Then last year, ABC released a new version of the show with guest judge, Clark Gregg from Marvel Agents of S.H.I.E.L.D. Yes, we have some of the new Battlebots toys again because, why not?

When I read the description of DiceBot Megafun dice game by WizKids, I immediately thought, “Hey, it sounds like Battlebots!” Robots equipped with lasers, shields, bombs and other weapons are designed to fight on behalf of their owners. It’s a battle royale with robots!

While the game is labeled as 2-4 players, let me start by saying that it’s really best with four. It isn’t a long game, taking around 30-45 minutes. The age range says 14+, but I say pfft. Kids that have mastered Pokemon can certainly play DiceBot Megafun and probably knock the nuts and bolts out of their older opponents. 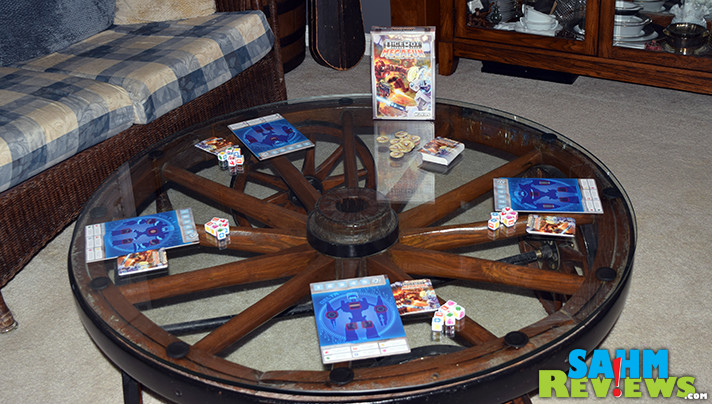 Each player is provided with a robot board, six weapon cards and six spare parts dice. The robot card displays empty spaces to hold spare parts that will be used to equip the various weapons over the course of six rounds of combat. Sounds easy enough, right? 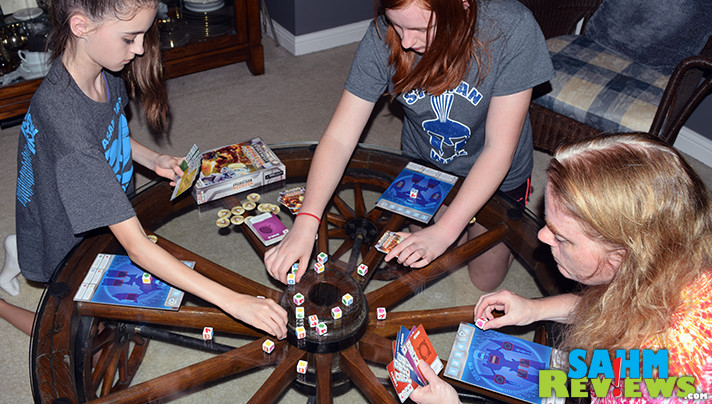 Well, the concept is easy, but the follow-through isn’t. At the beginning of each combat phase, players review their potential weapons to see what parts it will need in order to make it function. Some require only one part while others require two. Once all players have done so, all players roll their dice into a combined junkyard pile in the middle of the table. Now here comes the difficult part. Using one hand only, scavenge for the spare parts amidst the junkyard. It doesn’t matter where the dice originated because once in the junkyard, they are all fair game.

When a player locates a spare part they need, they place it on one of the red storage squares on their robot card. Not only do you need to be quick about figuring what you need, but it’s imperative that you recognize which parts will be in short supply and grab those before your opponent does! The sixth dice selected is placed on the head of the robot and can be used as a special power if the player so chooses. 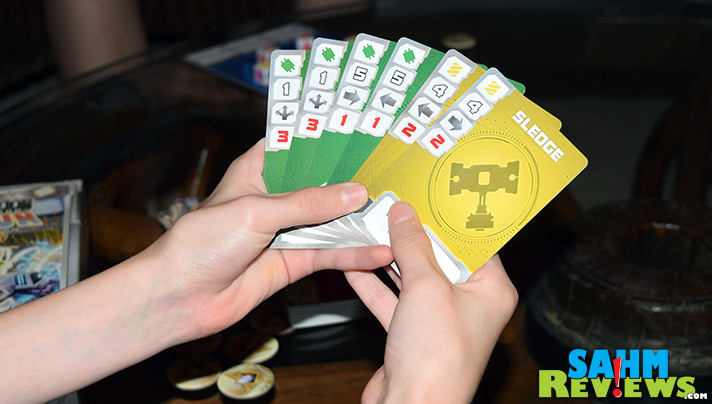 After all dice have been loaded onto robots, then the first round of combat begins. Each player secretly selects a weapon they want to enable. The top space on the weapon card indicates what spare part will be required to make it work. The second number indicates the speed of the weapon. The third shows who the weapon will attack and the fourth is how much damage will be done to the opponent(s). While all weapons in the round will be resolved before proceeding to the next round, it’s important to note that faster weapons go first. To damage an opponent, you have to equal or exceed the speed of their enabled weapon. 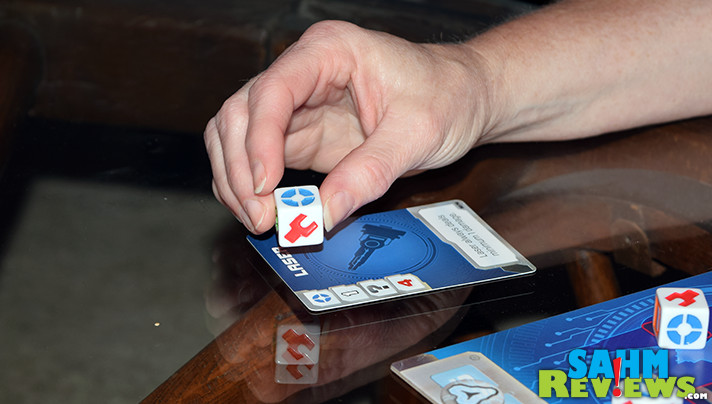 Once everyone has chosen their weapon, all players at once flip over and use the respective spare part to activate it. If they don’t have a part to place on the card then it is considered invalid and out of play. That robot is not able to defend itself or do damage for that round. After all cards have been resolved and damage recorded on the energy bar at the top of each player’s respective robot card, then play moves on. Any robot without energy is out of the combat. All with energy remaining proceed to the next round where the process of selecting a weapon from their hand begins again. If any player is the sole robot standing at the end of a round, they are awarded a victory point. If no players remain at the end of any given round then no victory points are awarded. Any players still standing after six rounds wins a victory token.

As I said before, DiceBot Megafun sounds simple, but when you are at the mercy of the roll of the dice, plans don’t always go as expected. While you may think you have the weapons to go on the offensive, if you don’t have the parts to execute your plan then, well, you can’t. But then again, if you’ve ever watched Battlebots, you already know that rounds don’t go as expected! That’s what makes the game interesting!

You can pick up a copy of DiceBot Megafun at the WizKids booth at Origins Game Fair or place a preorder on Amazon and be among the first to get it when it ships July 1st. Learn what else they are tinkering with on Facebook and Twitter.

Have you watched robots battle before?