Home / Fashion / Accessories / The Perfect Fit for Any Lifestyle 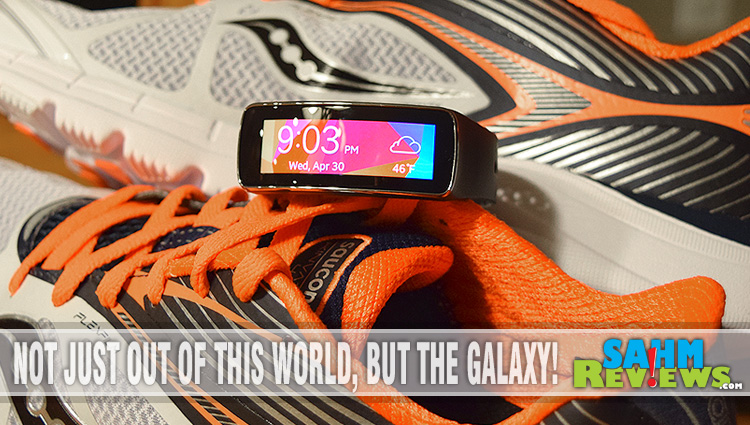 The Perfect Fit for Any Lifestyle

When we started our fitness quest a few years ago, we purchased heart rate monitors and over time expanded our wearable technology to include 3 of the newly introduced units. Each offers something different than the other such as a watch, step and activity monitoring, sleep tracking and sedentary notifications, Today, I finally upgraded to something that puts the others to shame – a Samsung Gear Fit. 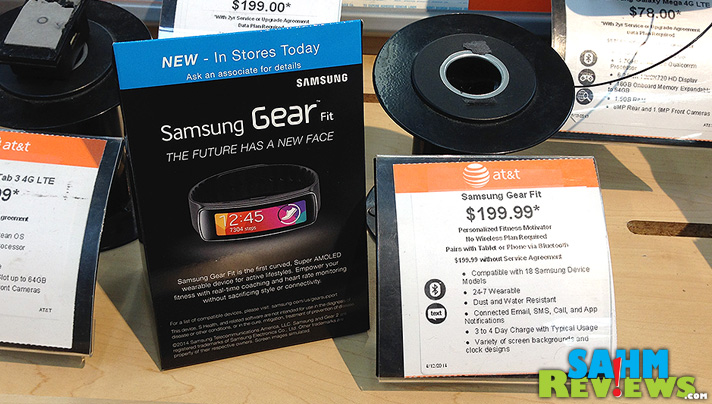 It’s not very often that I get envious. I’ve been blessed with a life filled with so many positive things, opportunities and most important, people. But today I’m totally jealous of this technology. Not only is it high tech but it is lightweight, has a touch responsive color display, is extremely functional and completely, totally awesome. I’m sure you are asking yourself why I’m jealous since I just got done saying I bought it. It is way more than I thought it would be and therein lies the problem. 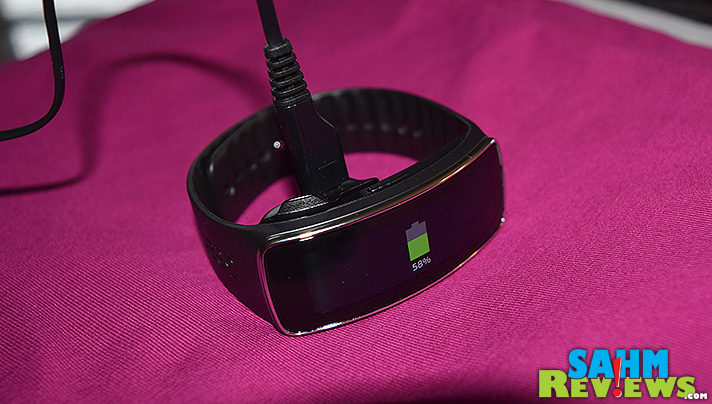 We charged the device then set off to see what all it could do. From the main screen, it displays the time along with another option such as the weather or activity progress. The customizable display feature alone make it better than our current devices. With the other activity-tracking devices that we own, we wear them and eventually sync them to our computer or phone. The phone doesn’t need to be nearby because while the units pair together, they don’t really correlate to each other. The phone, app and software are more of a mode by which to read your progress. So I figured when I bought the Samsung Gear Fit, I would be able to wear it and sync it to my daughter’s Samsung Galaxy S5 in the evenings. 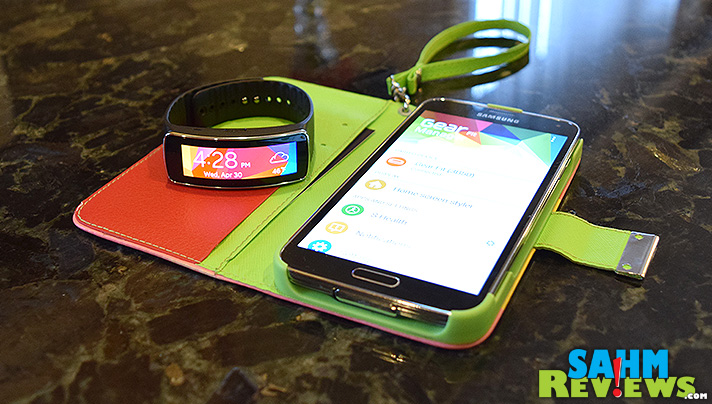 My logic demonstrated a total lack of “research before purchase”. Will my plan to wear the Gear Fit be what really happens? Nosiree. That baby is WAY more than just a glorified pedometer with a clock. It’s full-on wearable technology with a long list of other capabilities. I decided to see just how integrated it is by sending a text message to my daughter’s phone. Sure enough, it popped up on the screen on hubby’s wrist. (Since he laid claim to the maiden voyage, this was just one of the many hurdles I would face.) It was extremely cool to see my “Hello Gear” message pop up. Even more amazing… the options from there! “Delete” “Show on Device” and “Quick Reply”. Tap the “Quick Reply” to discover a short list of programmed responses such as “I’ll call you later” “Yes” “OK” and “No”.  All direct from your wrist. There are about a half dozen or so pre-programmed but you can use your paired device to change them to fit your personality or situation.

I took it a step further and decided to call my daughter’s phone. While it doesn’t give the option to actually answer the call and talk on it, it does offer two quick options. Swipe one direction across the screen and it rejects the call. Swipe the other direction and it sends to voicemail AND a quick reply that says “I’ll call you later” that launches a text message to the caller. There is only one template available but it, too, can be modified from your paired device. 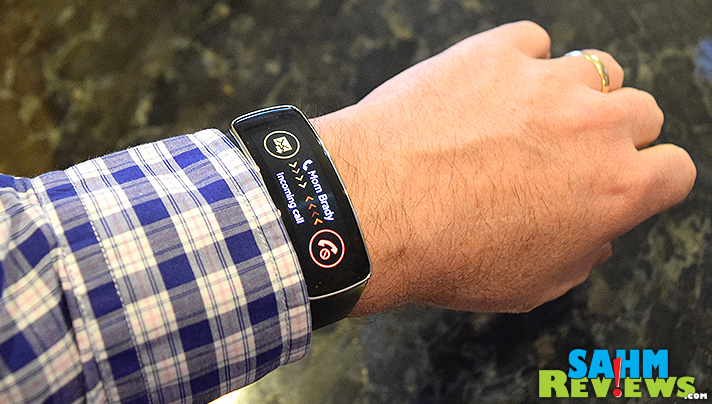 The new Samsung Gear Fit doesn’t stop there… It offers a media controller to easily play, pause or move through music stored on the paired device. It also provides notifications of missed calls, mail and calendar events. Are you starting to see my problem? I’m jealous because for me to put this device to full use, I would need to upgrade my current phone to a Samsung Galaxy (or take my daughter’s!) So I decided to let her use it for a night while at track practice. 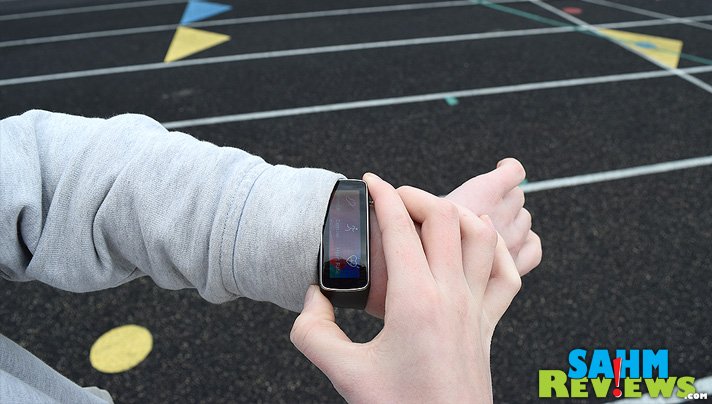 Did I mention that it’s also an activity tracker on steroids? Like other devices, it has a pedometer but also has a stopwatch, heart rate monitor and exercise tracker. She said one of her teammates spent the entire practice asking her what time it was. Miss M was excited to see how much she had accomplished at one track practice and was intrigued by the inclusion of the heart rate monitor. Of course, I can’t forget to mention that it includes a sleep monitor, too. 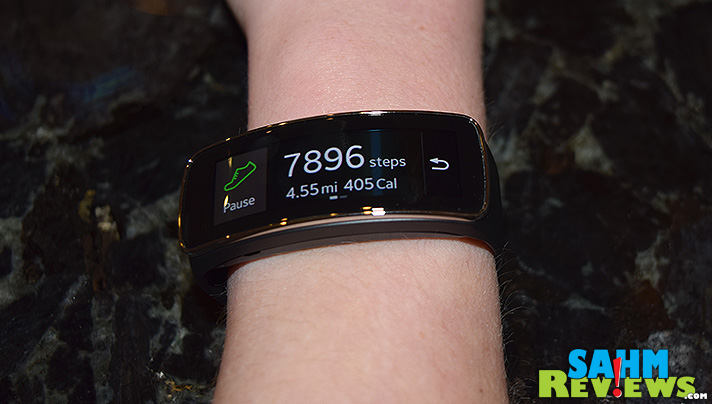 There’s so much it can do! The Samsung Gear Fit is available at Walmart for $199. Our store didn’t have them on display but did have signage (pictured above). If you have a supporting device, you’ll want to check this out. If you have tech envy like I do, you might just find yourself upgrading your other gadgets so you CAN wear this one.

92 comments on «The Perfect Fit for Any Lifestyle»