Home / Recreation / Games / The Menace Among Us Board Game Overview 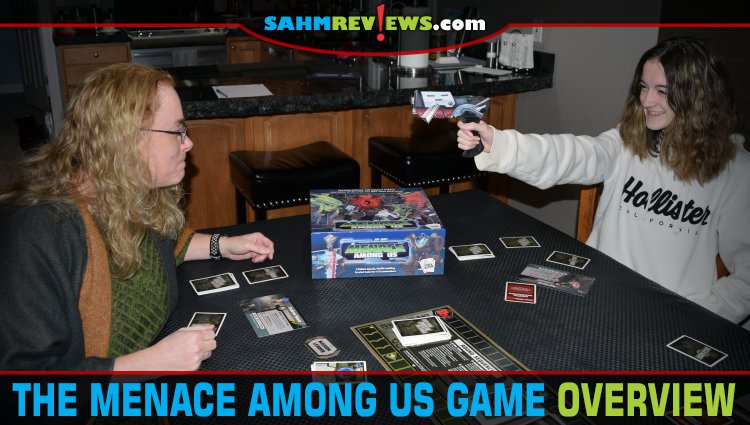 The Menace Among Us Board Game Overview

If I’ve heard it once in the past week, I’ve heard it a million times since the quarantine began… “I just saw (insert color here) vent!” It’s been part of an ongoing conversation between the girls as they’ve played a digital game called Among Us with friends and total strangers. If you haven’t heard of it, don’t think that it’s just a game for teens. We’ve had plenty of adult friends joining in as they have limited access to gaming as a group and are looking for games to play over Zoom or other online services. As people start gathering together in the (hopefully) coming months, we expect The Menace Among Us from Smirk & Dagger to really take off. It’s a board game version that’s been around for a couple of years, but I think the digital game with some similarities has opened people’s eyes to how fun it is. But it’s not the same so let’s talk about The Menace Among Us to learn more! 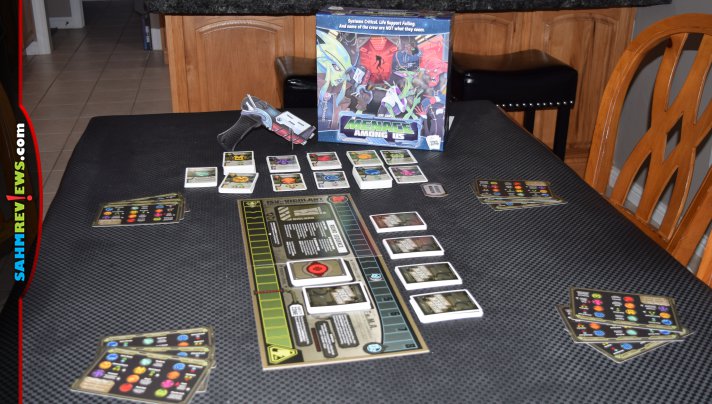 The most complicated part of The Menace Among us is the setup. It involves sorting cards and assembling into decks for EmMa and crew members, but the instructions lay that out in detail to make it as easy as possible. For the remainder of the setup, place the HUD board in the center of the table with the Energy and Oxygen tokens on designated spaces based on player count. Place the voting pistol next to the board alongside a stack of 15 shuffled wound cards. 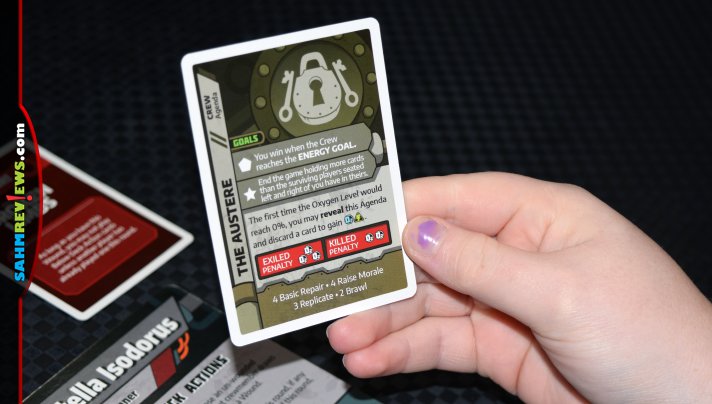 The idea behind The Menace Among Us is that you’re aboard a ship that’s heavily damaged and has limited oxygen remaining. Players are either loyal crew members (working together) or the deadly menace (independent), each with different agendas determined by cards randomly assigned during setup. Each player randomly selects an Agenda Deck then chooses a character that most aligns with their objectives. 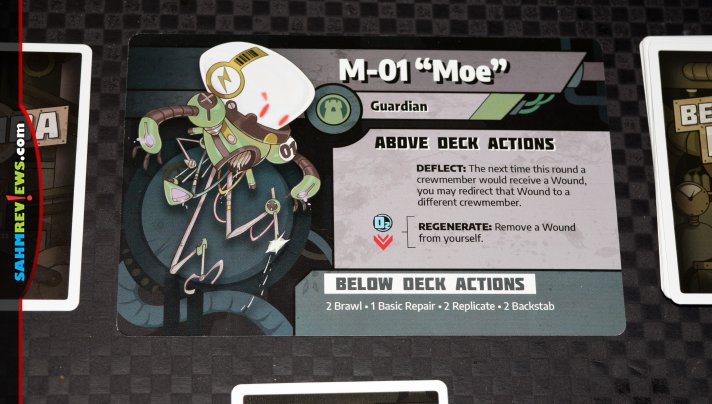 The Agenda decks include an assortment of Below Deck cards that include Good (Raise Morale, Advance Repair), Neutral (Basic Repair, Replicate, Backstab & Brawl) and Bad (Panic, Airlock Breach, Explosion and Reactor Leak). In addition to the random deck you received during initial setup, you’ll add additional cards based on your character. Everyone shuffles their individual decks then draws three to use as a starting hand. Select a Mission Leader to be the first player and you’re ready to go! 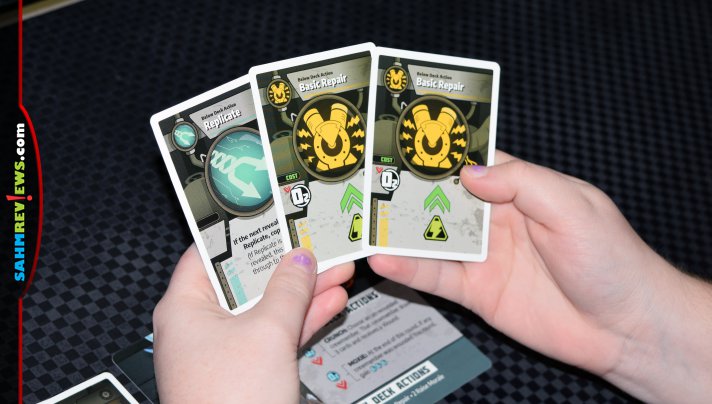 Each round consists of three phases beginning with the Action Phase. Starting with the Mission Leader, each player will draw a card from the top of their personal deck or select a Below Deck action card to play face-down in front of them. Remember that each agenda deck includes some good, neutral and bad cards so you’ll be selecting what you think is best based on your agenda (and the mercy of the cards you drew). As an alternative on their turn, the player may select one of their character’s Above Deck actions then pays the associated costs and performs the action. 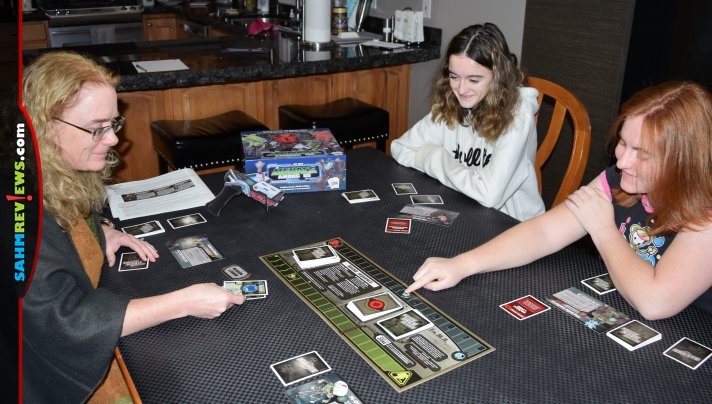 After all players have completed their turn for the Action Phase, the Resolution Phase begins. Depending on the number of Below Deck cards played, EmMA may intervene and provide actions from the EmMA agenda deck as well. The Mission Leader collects the face down cards, shuffles them then resolves each individually as they are revealed. Immediately following that, players can make accusations as to which player you think is the Menace then hold a vote. The round ends after the vote and a new Mission Leader is assigned. 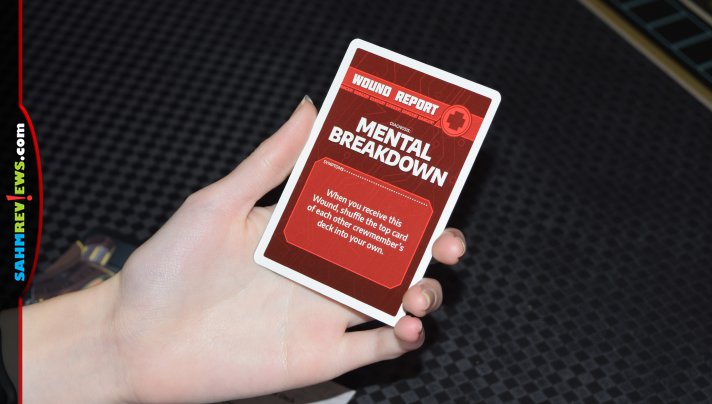 Various actions can cause wounds to the crewmembers and a crewmember is killed if they have two Wounds at the end of the round. Death can also occur if a player runs out of cards. Regardless of how they die, that player reveals their agenda. The game ends when either the Oxygen reaches 0% (Menace wins) or the Energy maxes out at 100% (Crew wins). You can vary the difficulty to an advanced game, giving players secondary agendas. In these cases, a player’s “team” may lose, but individually they win. This is best when you have more players who are familiar with the game.

As we blast out of quarantine in the upcoming months and begin to join together with others to play games, The Menace Among Us is an option for bringing some of those digital skills to offline life. You can find copies of the game on Amazon, direct from Smirk & Dagger or from your local game store. You can keep tabs of the menaces at Smirk & Dagger by following their actions on Facebook and Twitter. Be careful because half of the time they are up to mischief and the rest of the time they’re trying to make you laugh!

Are your online Among Us friends ready to try The Menace Among Us?

29 comments on «The Menace Among Us Board Game Overview»