While we aren’t a cat family, we appreciate how popular those furry felines can be. It’s not that we don’t like cats, although dogs are better, it’s because family members have serious allergies. That has never prevented us from playing cat-themed games and have enjoyed dozens upon dozens of examples over the past few years.

We’ve tried Slap Cat! and Cantankerous Cats and hosted a week full of cat-themed games with Tem-Purr-A, Kitty Paw, Here Kitty Kitty! and Cat Tower. So many have made it into our collection we put together a comprehensive list of feline-focused games to celebrate National Hug Your Cat Day! Now The Op, maker of the amazing party game, Hues and Cues, is getting into the mix with Super Cats! 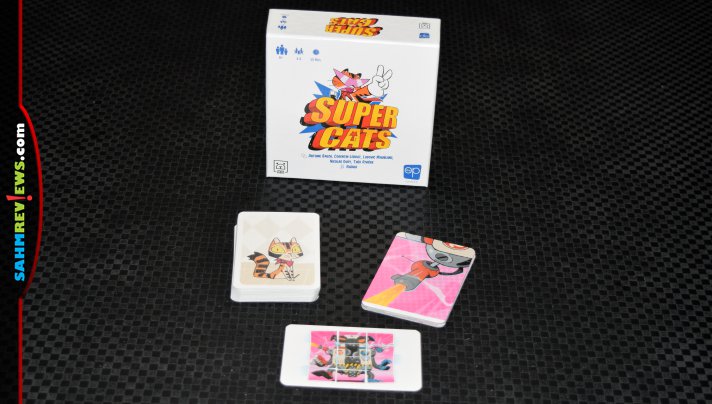 The first thing we noticed about Super Cats was the designers’ names on the box. While there aren’t many creators who are household names, we recognized some of these because we’ve enjoyed their other titles. Hanabi was one of the first hobby games we were introduced to years ago and I personally love the artwork utilized in Takenoko. The list of games these designers have been involved in is well over a hundred titles long and they feature a wide range of subjects, mechanics and price points. Fortunately, Super Cats is one of the more affordable examples of their work.

Super Cats is a 15-minute card game for 3-6 players. Uniquely, the game is split into two separate parts (episodes) which are played in order. Setting up the game is as quick as giving each player a team of five Cat cards and spreading out the six Activation cards in the center of the play area. Each person takes their team of five cats and lays them out in a line with the cat side up (the opposite side features a Super Cat). Your goal in this episode is to be the first to transform all of your cats into Super Cats! 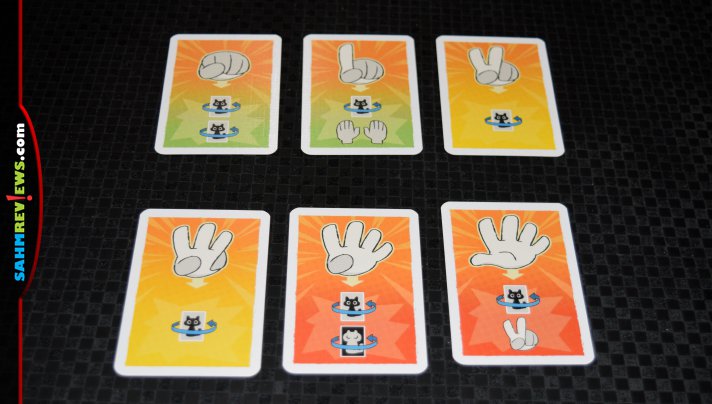 Much like a very advanced version of Rock, Paper, Scissors, each round all players will simultaneously hold up a hand with a number of fingers raised (from zero through five). The person who displays the largest-valued unique number is the winner of the round and will apply the effect of the matching-numbered Activation card. These will allow the winner to transform one or more of their cats into Super Cats, use both hands during the next round or even help another player by transforming one of their cats! Once a player transforms their 5th cat, they become the Hero who will face off against the other players in the second episode.

To begin this second phase, assemble the RoboDog using the twelve supplied cards. The Hero keeps his Super Cats cards, while everyone else returns theirs to the box. Now the Hero must defeat the RoboDog, who is cooperatively controlled by the other players. 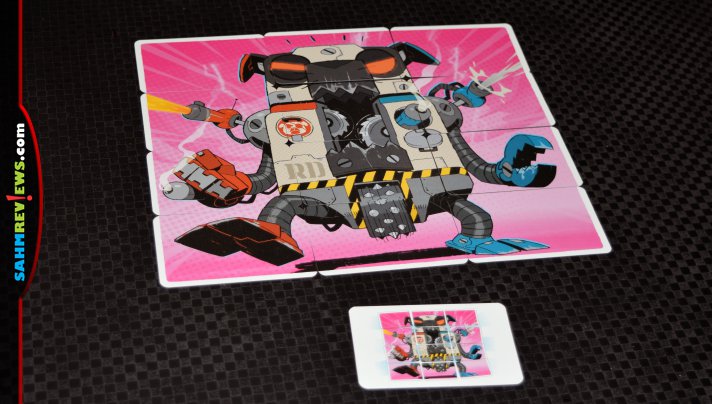 Just as in the first round, all players will reveal a number of fingers at the same time. Players who are controlling the RoboDog may not discuss strategy beforehand or reveal which number they will display. This time there are only two possible outcomes.

If the Hero is able to win a round using the number “0”, a Super Meow occurs. The Hero is allowed to flip over all of their cards to the Super Cats side and deal damage equal to the number of cards flipped! One thing to note, if playing with six players, make sure the RoboDog players aren’t “working together” to always choose the same numbers, forcing the Hero to choose “0” each time – it will result in a stalemate. Additionally, when playing with five or six, the Hero will gain a Silver and/or Gold Cat card they may use at any time to block all damage they would take on a particular turn. This is helpful for the unlucky circumstance where all RoboDog players choose the exact same number AND the Hero does as well!

For under $10, this is probably one of the best game values you’ll find and you can certainly expect to see it recommended in our annual Holiday Gift Guide as an affordable stocking stuffer. Pick it up at your favorite local retailer, direct from The Op on their website or on Amazon with free Prime shipping! Find out what else The Op is scratching up by following them on Facebook and Twitter!

What is your favorite cat-themed board or card game?