I may sound like a broken record these days (or always, really), but using games for teaching is such an underused training tool. Whether in the classroom or in a home setting, incorporating entertainment into an educational setting is what makes learning fun. History and geography aren’t boring said almost every teacher I had… yet none of them found a way to do it. It’s not that I’m learning more as an adult, but I’m certainly absorbing history and science better by playing games. The Manhattan Project board game (the project, but also “yellow cake”), Silk dice game (the geography and process of silk farms) and Periodic board game (the scientific table) are a few of the many, many concepts that I would have taken more of an interest in had the games been used as part of my education. Fuji, a game available stateside through Capstone Games, is about the famous volcano in Japan. In hindsight, it would have made a lot more sense to talk about this back in June when I told you about Volcanic Isle and The Table is Lava. But let’s be real… nothing these days makes much sense. 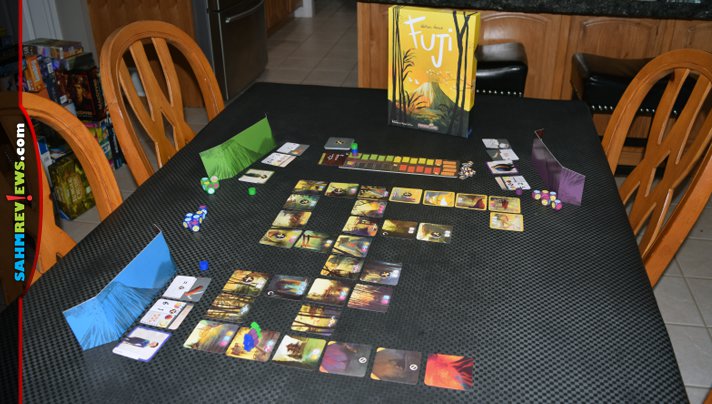 Since I don’t foresee a trip to Japan anywhere in my near future, I’ll have to experience the country and culture using Japanese-themed games. Fuji, as it turns out, checks two of my favorite boxes in a game. It’s cooperative and it’s a dice game. We’re trying to get our group of Mt. Fuji explorers safely to the village before lava from the recent eruption reaches anyone. Each player randomly selects a skill card (and corresponding dice), a character card and matching meeples, destination marker and stamina tracker. Shuffle the deck of equipment cards and take the number as indicated on your skill card. The remainder of the deck of equipment cards will be used as a draw pile. Randomly draw a scenario card then build the terrain accordingly. Place the stamina board alongside the terrain and place everyone’s stamina trackers on the first space. Decide on your group’s difficulty level then take the corresponding level card and place it in the designated spot next to the stamina board. 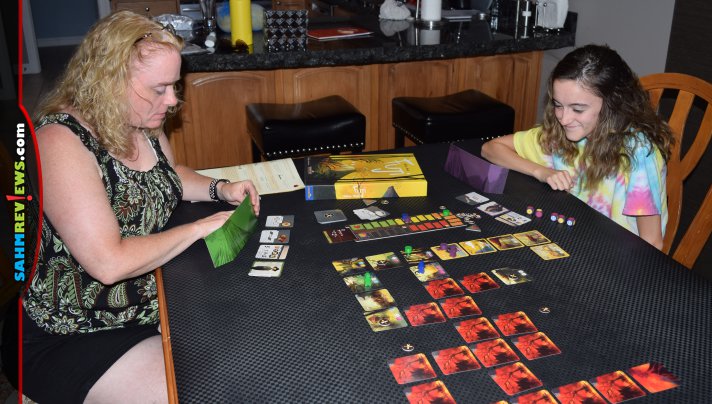 The most important thing to understand is the principle of movement. Everyone rolls their dice simultaneously and compares the results to the players on either side. The only way you can move is if you have the highest total based on the card she’s attempting to move to. That will make more sense in a minute, but keep it in mind as I continue with this game overview. Each round includes six phases. 1) Rolling the dice, 2) planning and using equipment cards, 3) rerolls, 4) activating equipment cards, 5) movement and stamina and finally, 6) eruption. After the eruption, the round is over and a new round begins.

Begin each round by rolling your dice behind your screen. You aren’t allowed to discuss what you rolled nor are you allowed to manipulate the results. You’ll need to use equipment cards and quality planning for everyone to make it safely out of this mess. You can discuss your goals and place your destination marker on terrain cards, but you can’t reveal your specific dice results. Comments like, “I have a lot of fours” is invalid, while “I have a lot of high values” would be okay. Players may move their meeples up to three spaces horizontally or vertically, but may also stay on the current space. For obvious thematic reasons, you can’t move on or over lava, rubble or volcano cards. Place your destination marker on your chosen terrain card based on the movement rules. If you change your mind on where you want to move, simply relocate your destination marker. That’s allowed during the planning phase!

Each card shows the requirements for being able to move there. There are three dice colors, six values, odds (squiggly line) and evens (straight line). So a card with a yellow dice with a squiggly through it means the total value of all yellow odd results. In order to move to that space, you’ll use the movement requirements of comparing to your neighbors and you can only take that action if you’ve met that requirement.

After everyone has committed to their preferred destination, all players may reroll dice up to three times based on how far you want to move. If you’re staying in your current location, you are allowed two rerolls. Move one or two spaces earns you one reroll. Three spaces means you are stuck with your original roll. The rules regarding rerolls are pretty loose. Roll one or many. Change which ones you reroll including repeating ones you’ve already rerolled. The main rule: you are not allowed to communicate during this phase. 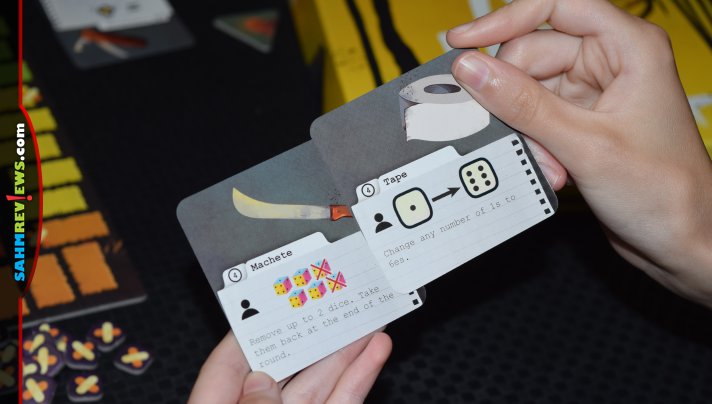 After rolling, planning and rerolling, you may use certain equipment cards. These are one-time use so make sure you’re implementing them at the best time for the entire team. Equipment cards are face-up for everyone to see so it’s okay to discuss with your teammates which everyone things should be used. Everyone uses as many equipment cards as they choose then those cards are discarded. 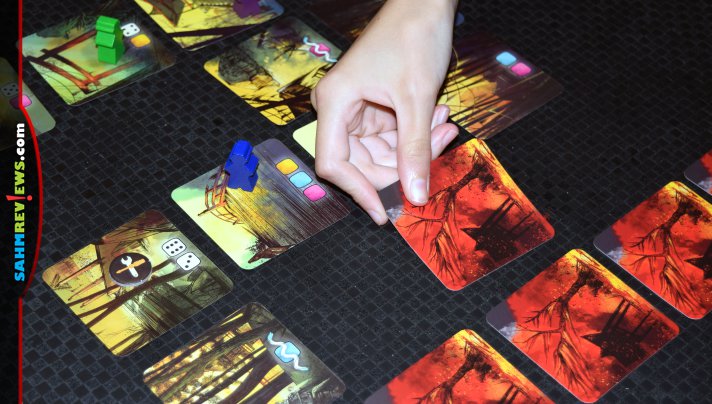 When the equipment phase is completed, it’s time for the movement and stamina phase. Everyone removes their screens to reveal their dice then proceeds to compare their results with the players next to them. As a team, decide in what order you want to move. Each player will take their movement then adjust stamina before the next player does the same. If you end your turn on a card with an equipment token, you draw a new card from the equipment deck and lay it in front of you. Remove the token to indicate that the equipment left at this location has been claimed. If you move your meeple past or onto a card with an eruption token, it triggers an additional eruption (then the token is removed from play). 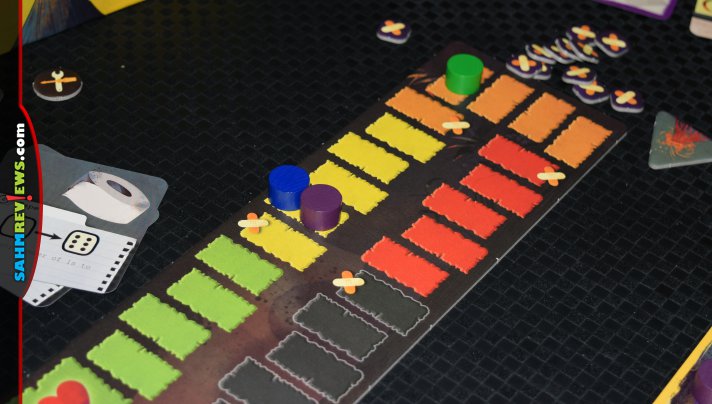 After moving, compare your movement to whichever player next to you had the highest value. You’ll reduce your stamina by the difference between those two sums then adjusted based on the amount noted on the level difficulty card. If you didn’t plan well and found that you weren’t able to move, your stamina will lose the maximum stamina noted on the level card. If you run out of stamina, your character dies and your team loses. Each time you move past a space with an injury symbol, you take an injury token and place it over one of the spaces on your skill card. These injuries limit future actions for the remainder of the game.

At the end of the round, flip all landscape cards that are adjacent to a lava card indicating that there’s an eruption. If someone happens to be standing on one of those cards, they die and the game is over. You’ll repeat these steps over multiple rounds until either someone dies or everyone makes it safely to the village. The unique movement process implemented in Fuji provides a unique spin from other cooperative dice games. Like many cooperative games, it isn’t easy to win… but that’s what makes you want to play it over and over. Ask your local game store if they happen to stock Fuji, otherwise pick up a copy on Amazon. I guess if my trip to Japan might include running from lava, I think I’m better off playing the game instead anyhow.

Have you ever been to Japan?