Once again, a board game has taught me that you’re never too old to learn something. As I’ve said like one thousand times here, history was never my thing in school. I hated all the reading. I struggled with the memorization. I simply didn’t enjoy it. If the class didn’t revolve around math in some way, I probably wasn’t interested. Not only did history bore me to death, but geography wasn’t high on the list either. It wasn’t that I found it dull, but since our family didn’t travel much, I simply wasn’t drawn to the backstory and location of places I didn’t think I would ever visit in my lifetime. I was married before I ever left our country and at 50 years old, still haven’t made it to a dozen states nor been overseas. Yet at a time when travel is unheard of, I’m learning about the mythology of a lost continent. As I read the intro to Volcanic Isle from Arcane Wonders, I found myself putting down the rule book and heading to the internet to see if the lost continent of Mu was a real mythological story or something from the mind of a science fiction writer. This led me down a wormhole to learn about Mu, Atlantis and scientific geological studies of a new continent found below the Indian Ocean. Needless to say that it took me a little while to get back to reading the instructions, but I returned excited about the idea behind the game. 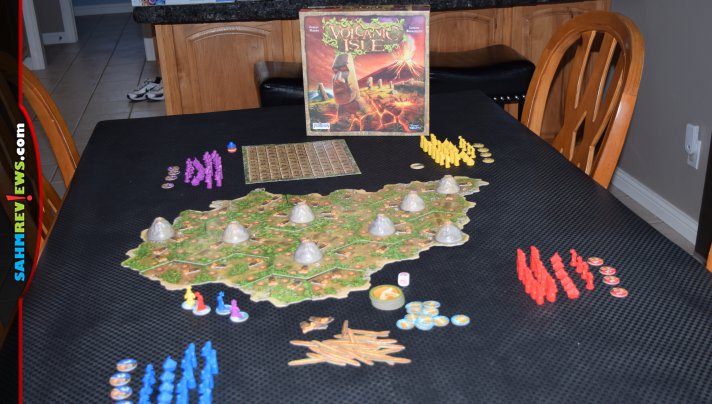 I hope that makes you just a wee bit curious about Volcanic Isle and how to play. The setting is the continent of Mu, covered with volcanoes and lava flows. As the story goes, inhabitants of the land feared the eruptions and raised Moai to please the gods. But as we all know, volcanoes erupt, have lava flows and wreak havoc on the land. Thanks to modular pieces, there are a variety of ways to set up the board. Arrange the island with 3D volcano pieces placed in the appropriate spaces. Lava flows are added to the spaces alongside each starting volcano as well as in the empty spaces on each area that doesn’t contain a volcano. Each player selects a color and the related pieces then all remaining components create a general pool. 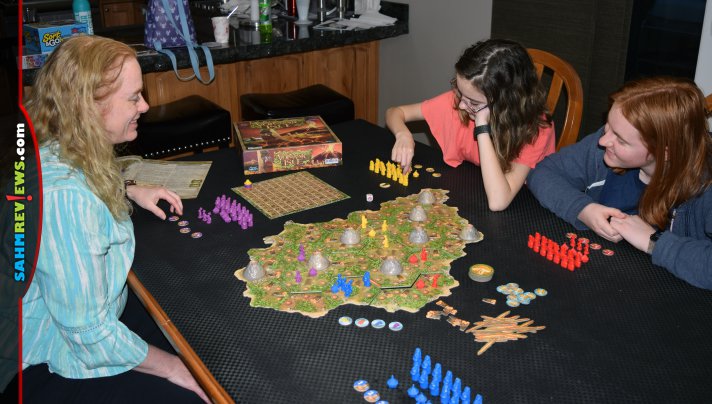 Throughout the game, you’ll be using action points to create or move settlers, build villages, sculpt and raise Moai and obtain player tokens. You’ll have four to use on each turn and each of these actions have different costs. But this isn’t an area control game. It’s a survival game where you need to continuously reconstruct your villages and Moai as the volcanoes erupt and wash away your progress. Oh, and you’ll also have to be mindful of the fact that parts of the island will gradually sink into the ocean, never to be seen again. 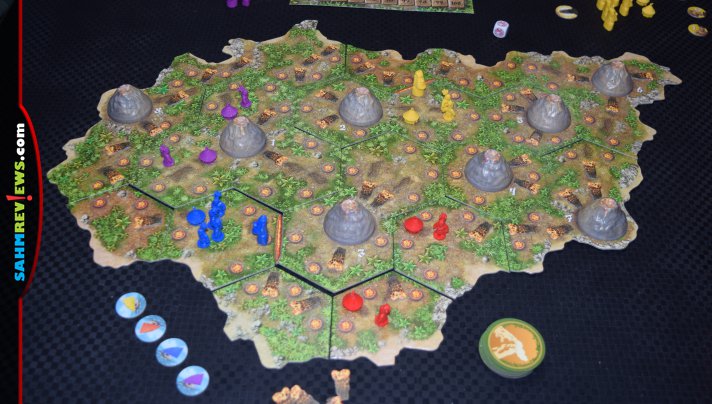 Wherever you are, you have the option to use the land’s resources (lava) to build a village. To do so, you’ll remove the lava flow tile from the board and place one of your villages in it’s place. This will cost two action points. As an alternative, one action point to sculpt a Moai using the lava flow. In this case, you’ll lay one of your Moai tokens in the space instead of placing the village there. You could also spend actions to move a settler to a new area, create a new settler or raise a Moai. 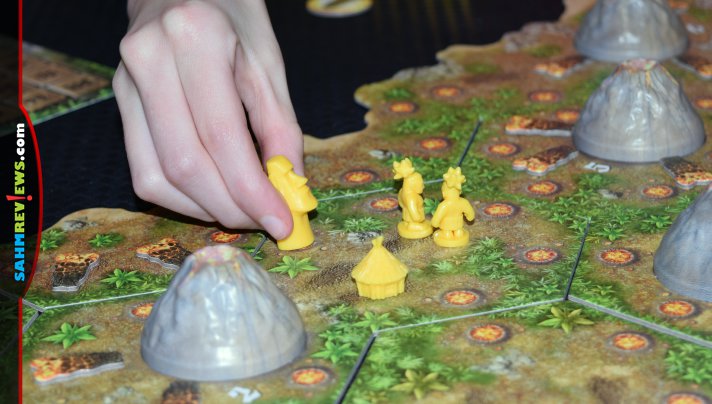 You’ll continually move around the board taking these actions on your turn. Things are pretty smooth until someone actually raises a Moai. That’s when things get complicated. Moai are placed on an available geyser which will cause the pressure under the surface to increase.

The player who raised the structure will roll the volcano die and hope for the best. If it comes up blank, then the game continues. If the result is a volcano then it’s time for an eruption! Draw a random volcano token and reveal the number on the back. That volcano is where the eruption occurs! 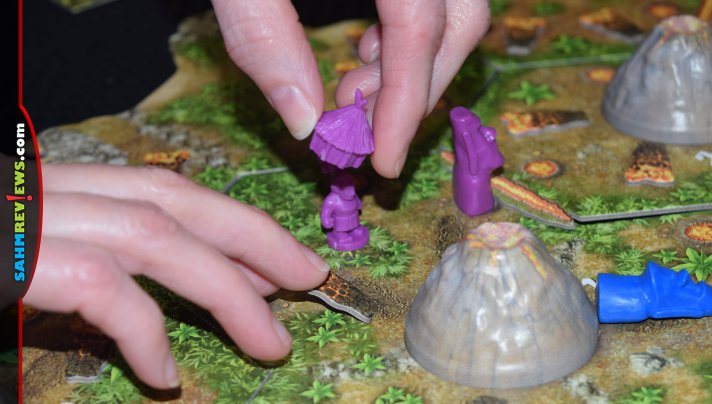 New lava flows are added to the board, wiping out anything built in their path. Those items are returned to the players to use on future turns. The new lava flows are a renewed resource for additional buildings and Moai. Thankfully, when you originally build villages, or raise Moai, you’ll earn victory points based on a variety of guidelines. Even if your village or Moai is destroyed by the eruption, you won’t lose those points. If you happen to have prayer tokens, you may use them to save a village or Moai. 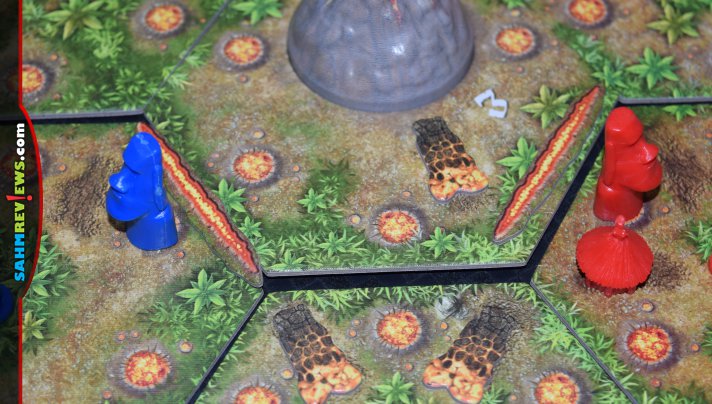 In addition to potentially causing an eruption, another thing happens when a Moai is raised. You place a fissure tile on the border in front of it. When a section of the island is completely surrounded by fissures and/or the sea, it breaks off. The active player may rescue all the settlers and place them on one space adjacent to the lost land. All other players are allowed to rescue one settler.

You’ll continue to traverse the island, raising Moai and dodging the destructive lava channels. When there are two or fewer volcanoes remaining, the round is completed and final points tallied. In addition to points you earned along the way, you’ll also earn end-game victory points for villages, settlers, prayer tokens and Moai. The player with the most can claim the island as their own. The shrinking landscape reminds us of the Survive series of games, but the constantly destructive then replenished landscape makes Volcanic Isle unique. You can pick up a copy of Volcanic Isle on Amazon or from your local game retailer. While you wait for the next eruption, enter to win a copy right here!