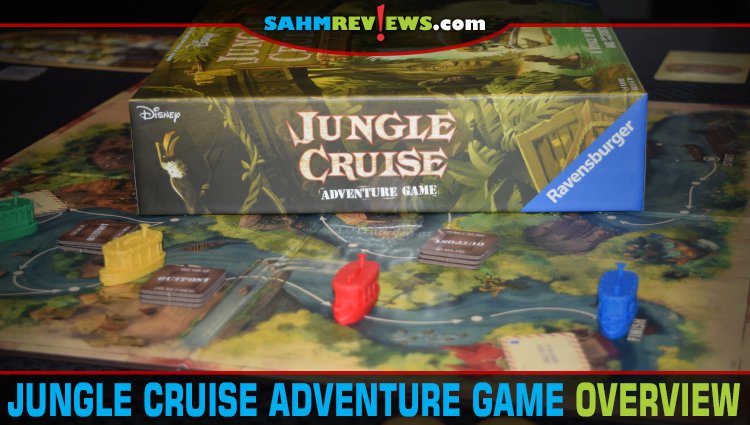 Here’s a frustrating story we haven’t told yet. Every two years at our high school the band gets to take a trip somewhere sunny for spring break. Kids and parents save for those full two years in order to afford these once-in-a-lifetime excursions where they not only get to blow off some steam, they also get the opportunity to perform live in a setting many musicians dream of. The teens get to vote on where to go and this year was going to be no different than the past – Disney World.

So our daughters performed odd jobs, participated in school-sponsored fundraisers, worked booths at Origins and Gen Con and even hawked D&D dice at Geekway to the West in order to save up the nearly $2,000 each they would need for the trip. Then COVID hit. We were within days of sending them off to Florida when the cancellation was announced. We were assured the trip would only be postponed. Looking back, we were naive.

The weeks went by and it became obvious the trip wouldn’t happen. And if that wasn’t sad enough, here’s the real kick in the stomach. The professional travel agency, a company that handles 100’s if not 1000’s of these types of trips every year for schools across the nation, gave notice that they would not be refunding us in full because “they had costs”. To date, we don’t know what these costs were. Disney certainly charged them nothing. The bus company didn’t charge them for services not used. It sounds like they are only covering their lost profits at the expense of the kids. We’re assured we’ll get something back, but in the neighborhood of 50-75% of what we paid. It’s bad enough these kids lost their school year (and probably part of next), but to have a company put profits ahead of their customer base has honestly made our daughters not want to go if it ever gets rescheduled.

So what does this have to do with board games? We’ve been reliving our memories of visiting Disneyland and Disney World by playing the brand new Jungle Cruise Adventure Game by Ravensburger. While nothing can replace the experience of sitting in one of the actual boats travelling down a lazy river in either Orlando or Anaheim, this is the next best thing (and we’ll actually get what we paid for! But I digress…)!

The original Jungle Cruise at the theme parks is an attraction which “simulates a riverboat cruise down several major rivers of Asia, Africa and South America. Park guests board replica tramp steamers from a 1930s British explorers’ lodge and are taken on a voyage past many different Audio-Animatronic jungle animals. The tour is led by a live Disney Cast Member delivering humorous narration. This narration is based on a written and practiced script, but generally is largely delivered ad-lib.” (Wikipedia)

In the Jungle Cruise Adventure Game, instead of being a passenger, you are the skipper of one of the boats! You’ll be delivering passengers and cargo to the headquarters, and if you’re lucky you’ll be shuttling members of the family chosen to be the caretakers of the Jungle Navigation Company! 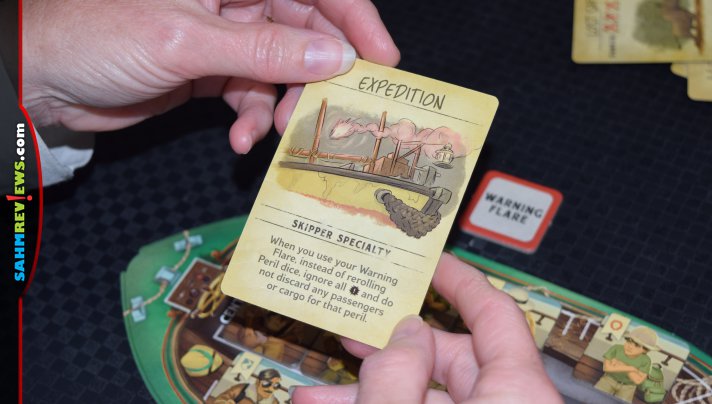 Each person begins the game with a custom boat placard, a matching-colored plastic boat, a warning flare token, one skipper specialty card and twelve corresponding passenger tokens. The board is set in the middle of the play area and is populated with random outpost and clue tokens. Lost & found tokens are piled face-down to the side of the board, while the five tip tokens are laid face-up in the headquarters area. Navigation cards are shuffled and also set on the board’s edge. 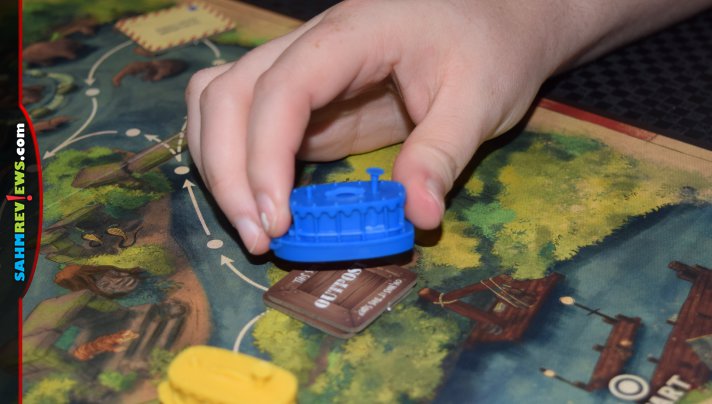 The first thing you will do on your turn is rearrange any passengers and/or cargo you have on your boat. You will then roll a custom die and move your boat. Now wait, this isn’t your typical roll-and-move game. There’s more to it than just the luck of the roll! Your boat will move forward the number of spaces rolled unless it passes an outpost or clue space. At that point it immediately stops. 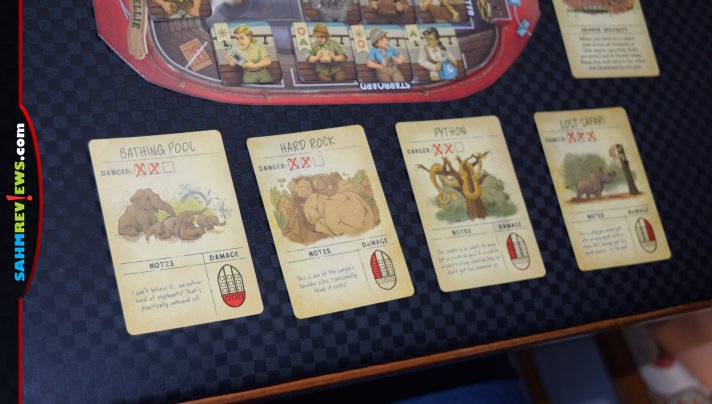 Four navigation cards are drawn from the deck and its jokes read aloud (just like the horrible puns from the real ride!). Depending upon how many spaces you moved your boat, you must choose the same number of cards from the four to resolve. Each card has a “danger rating”, which signifies the number of peril dice you must roll to see if something bad will happen. You can resolve the cards in any order and each one also lists the position on the boat the effect will affect (yes, Ms. White, my middle school English teacher – I used that correctly). 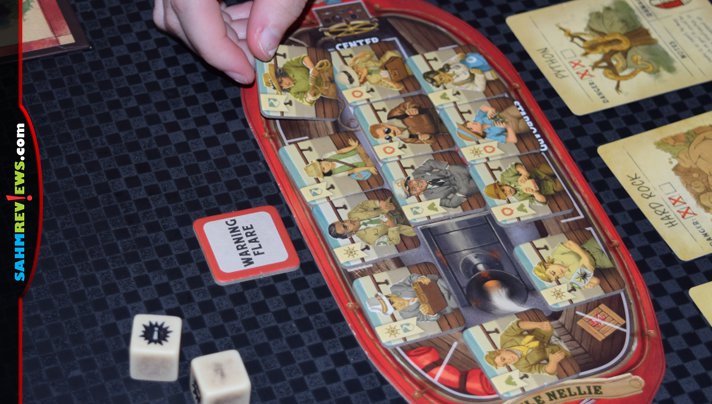 The results are you may lose cargo or even passengers from your boat! You might also choose to use your warning flare token to allow you to re-roll the dice, hoping for a better result. Other special navigation cards must be encountered before other cards, and usually are good for you. 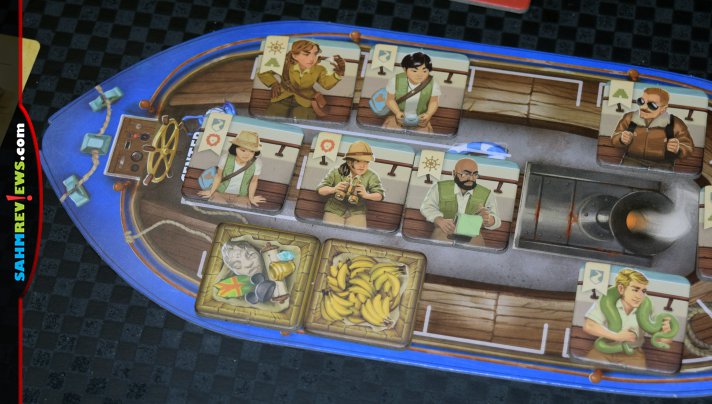 If you land on a space that isn’t an outpost or clue spot, you may pick up one of the lost & found tokens and place it on your boat. Outposts are helpful in that they not only allow you to refresh your warning flare token, they award you with some lost cargo or a lost passenger, if available! 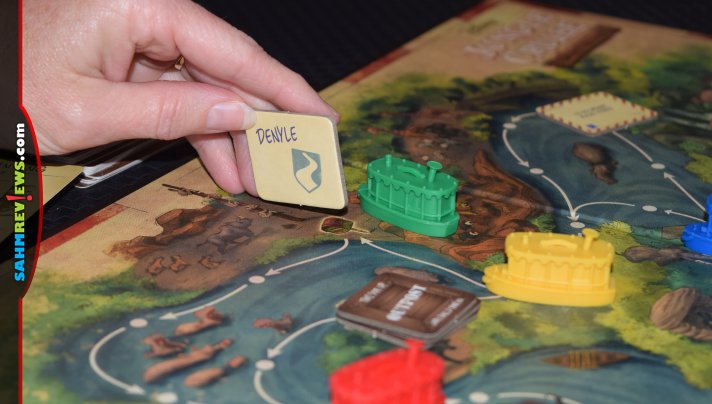 Clue spaces house one of the four clue cards, each of which show one of the four families of passengers in the game. When you land on one, peek at the token. This will tell you who the special family isn’t. All passengers are hoping to make it to the headquarters (and are worth points), but some will be worth more than others. 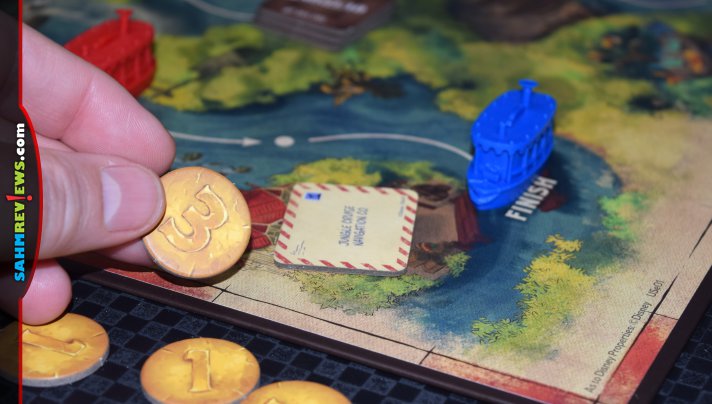 Speaking of passengers, in this Jungle Cruise Adventure Game, they are overjoyed when they are quickest to arrive at the headquarters. When your boat lands on this final spot, take one of the five tips of your choice. On subsequent turns, take another tip instead of moving. The game ends immediately when the fifth and final tip is taken from the headquarters!

Final scoring is determined by adding up the values for passengers (3 for a regular passenger, 5 for a caretaker, which are members of the special family). Each set of three different types of cargo are worth 10 points, two different are worth 4, while a single piece of cargo yields one point. Tips are worth their face value and the player with the highest overall total wins the Jungle Cruise Adventure Game!

While this game is advertised for ages 8+, we really feel it can be enjoyed (and maybe better targeted) at ages 6+. The roll-and-move mechanic is simple enough for them to play, although they probably won’t understand the skippers’ jokes. It is a good tribute to the ride we all wish we could be on right now! You can find it at your favorite local game store, direct from Ravensburger on their website or via Amazon. We’d love to see additional games paying tribute to all of Disney’s rides. If you would too, follow Ravensburger on Facebook and Twitter to find out if they have any plans to do so!