Well, it’s official. Last week we got word that our school district is going with a hybrid learning model. The girls will attend classes at the school two times per week and online from home on the opposite days. Fridays will alternate with on site and at home. As with every parent, student and school official throughout the country, we hope for the best possible education while remaining healthy. It will be interesting to see how things work out. I’ve heard a lot of people talk about homeschooling as an alternative or in addition to what the districts are doing. I want to scream from the rooftops, “If you’re going to homeschool then please incorporate games!”

Case in point, Silk from Devir Games. It’s a dice game about silk farms in the Akaishi Mountains, tended by shepherds who use mastiffs to defend their farms from the ookami. When I read the intro, it immediately sent me down a rabbit hole to learn more about silkworms, the Akaishi Mountains and even the ookami. What I discovered is that ookami is another term for a Hokkaido wolf or Japanese wolf (AKA the Honshu wolf). Games provide not only entertainment and engagement with other people, but the opportunity to learn as well. Fun – while learning – is the best education. 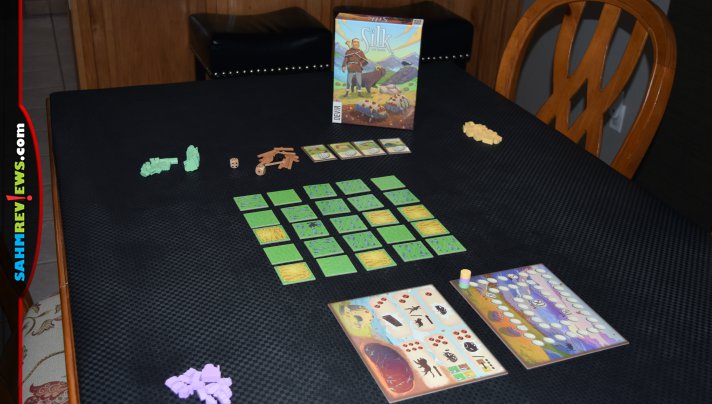 So let’s learn about the game! Setup Silk by providing each player with 15 silkworms, a shepherd, a mastiff and 4 silkworm nurseries in their chosen color. Shuffled the tiles and place them face down on the table in a grid according to the number of players. Create a reserve of wall pieces then place the Silk Points scoreboard, dice, action board and improvement markers near the game area. Add the ookami meeple to the tile marked with her den. Players will take turns adding their nursery, 7 silkworms, 1 shepherd and mastiff to the play area. 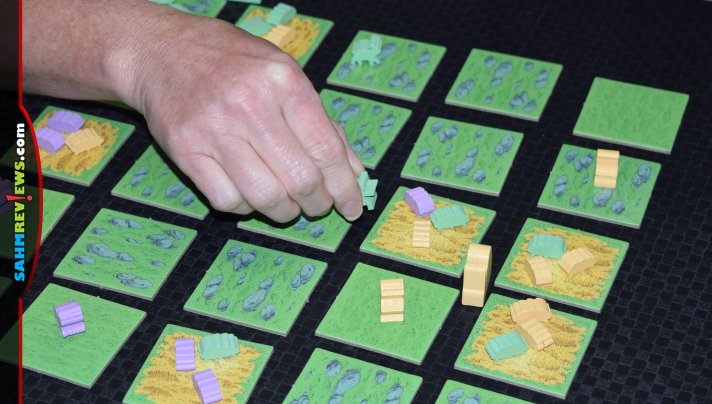 There are a couple of housekeeping tips to keep in mind. A maximum of three silkworm can occupy one tile, but they can be a mix from different players. Nurseries are placed on intersections between tiles with at least one silkworm of the same color and at least a two tile distance away from any other nurseries. Shepherds and mastiffs must be placed on tiles adjacent to at least one silkworm of their color and may not have anything else sharing the tile with them. In addition, ookami tiles cannot contain any other pieces either. Whenever you move throughout the game, it is done orthogonally (never diagonally.) Walls block the movement of everyone except the shepherd. Movement is one space only, but all pieces except the silkworms can wrap around the board.

On your turn, if you have any silkworm in your reserve and there is space available, you must place one silkworm onto the game area. Then, you’ll roll two dice and take the related actions. You are required to take both actions (one per die) and if you choose not to (or are unable to) then you must spend silk points to convert the value of the dice to another action. 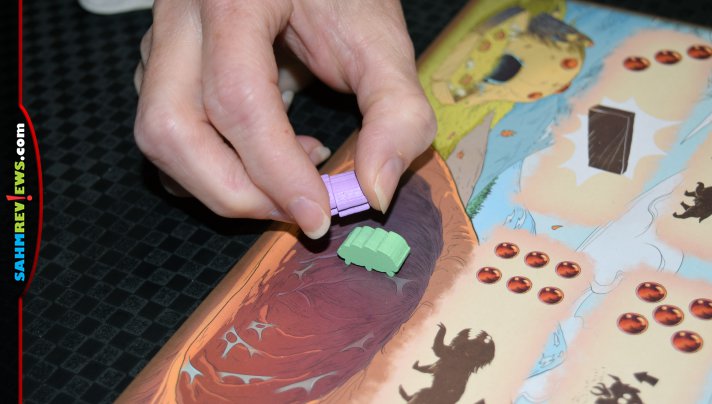 The action board also includes a space that represents the ookami den. Ookami feed on silkworms so she is constantly on the hunt throughout the fields. It’s the job of the shepherds and mastiffs to steer the ookami away. There are six potential actions to take to accomplish these tasks. A single pip die allows you to raise a silkworm. You take one silkworm from your reserve and place it on any tile that is next to one of your nurseries or on a tile that already has one of your worms. Don’t forget that only three in total are allowed on a tile so if there isn’t room then you can’t place there. If you’ve run out of silkworms in your reserve then you can rescue one from the den instead! 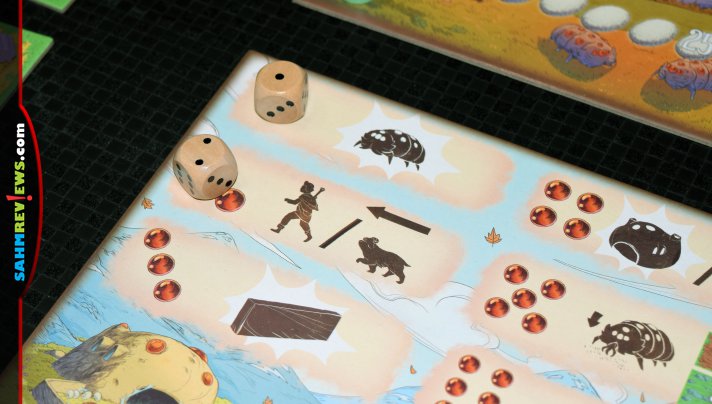 Two pips are required to move the shepherd or mastiff. As I mentioned before, both these pieces cannot share space with any other pieces. As a result, they can bump others! But it isn’t that simple. Shepherds bump mastiffs and silkworms but not other shepherds or ookami. Mastiffs can bump ookami and silkworms but not other mastiffs or shepherds. When you bump another piece, you get to decide where they go. You can use this as an opportunity to put your opponents’ silkworms in harms’ way or push the ookami further away from yours.

You can earn points by completing wall segments and enclosures which is done using a die result of three. Construct nurseries with the four. This allows you more places to raise silkworms while also helping meet requirements for completing wall sections. Once you have built all your nurseries, you can regenerate barren tiles that have been degraded from grazing silkworms. You’ll graze using the five action space. The different terrain tiles have higher values based on how fertile they are. When you take the graze action, you earn points based on the number of silkworms and the value of the land. After doing this, you bump all the silkworms to other spaces and flip the tile to the less fertile side. 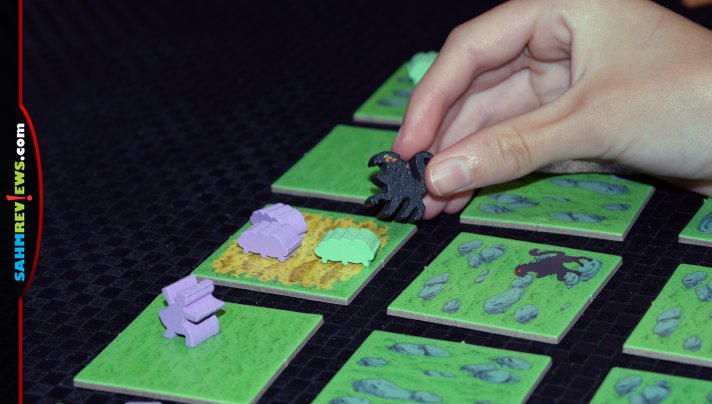 The final action (a six die) involves moving the ookami. Any time it shares the space with a silkworm, those silkworms are moved to the den. Ookami cannot share tiles with mastiffs, but other than that they will bump other pieces. Players continue taking actions until one player has the designated number of points based on the player count, one person has constructed the last wall or all the pieces have become barren following a grazing action.

Shepherds are also trying to improve their stature and can do so by completing the listed objectives. The first shepherd to meet these goals earns the silk points immediately. Improvements include building walls, creating enclosures, constructing nurseries and emptying their silkworm reserve. At the end of the game, players earn additional points for enclosures, a final grazing phase takes place and points are deducted for silkworms in the den. The player with the most silk points is the winner.

While the game itself doesn’t actively convey information about silkworms and the trade, the basis of the game is an excellent platform for education. Whether you are planning to homeschool or are looking for a dice game to play on game night, add Silk to the list. Check the Devir Games website for stores near you that carry Silk, or pick up a copy on Amazon. Swing by their social channels (Facebook and Twitter) for news about the latest game releases!

Do you own anything made of silk?