Something about raising kids that continues to fascinate me is how they see things through their eyes. For example, when I think of Chicago, the first things that comes to mind are the Chicago Cubs and Chicago Bears along with what used to be the world’s tallest building, the Sears Tower (now the Willis Tower). If you ask either of my girls about Chicago, their first thoughts are of the popcorn store or the Chicago Symphony, both of which they’ve been to on multiple occasions.

If you ask them about places we’ve visited, they usually describe the hotel first before the actual destination. They’ll marvel at the luxury of one of Disney World’s best hotels or complain about a disgusting experience at Red Roof Inn. I guess because the hotel is the place we return to every evening, it burns into the memory of the overall vacation.

The other night we were trying out a new board game by Renegade Game Studios called Passing Through Petra. Set in the famous tourist attraction in Jordan, I instantly recognized it from one of the best movies of all time, Indiana Jones and the Last Crusade. Petra was prominently featured towards the end of the movie in an amazing battle scene between Indiana and the Nazis. 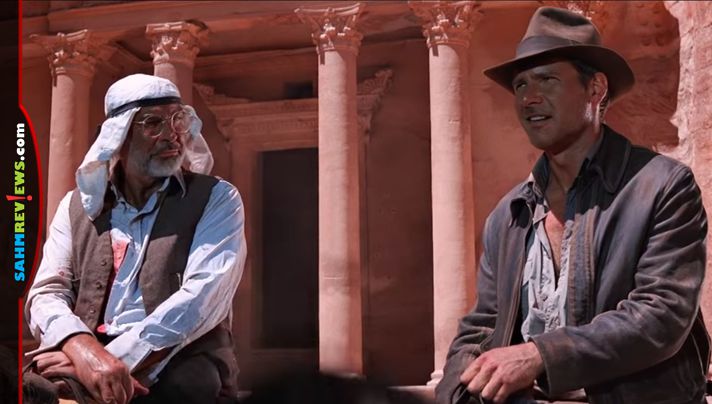 But as we sat down to play, Madison exclaimed while looking at the box cover, “Hey Dad! That’s one of the new maps in Overwatch!” She was right! Sometime last year Blizzard added an arcade map to their wildly popular video game that allowed you to do battle throughout all of Petra, inside and out. It’s amazing to see what triggers memories in different people!

As it turns out, Passing Through Petra became a good catalyst to talk about the history of the famous market, which eventually turned into whether or not it is safe for Americans to travel there (it is). We didn’t originally choose this game to play for its historical accuracy – we chose it because we’re HUGE fans of one of the designer’s previous games, Gold West. We knew if we enjoyed Passing Through Petra half as much as his previous game, it would be a winner in our books. 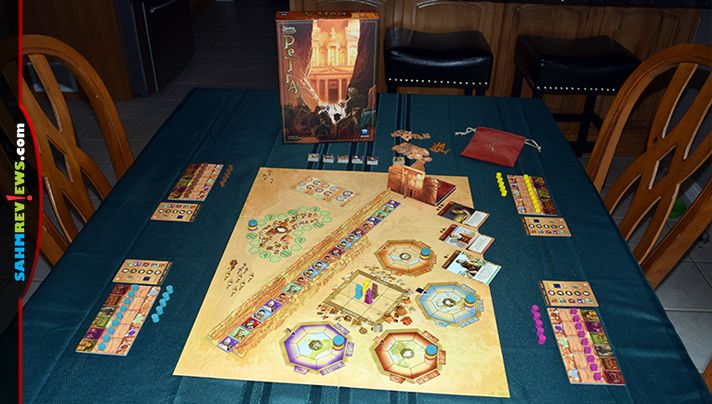 One part about the amazing story of Petra is the fact that people had to travel in caravans through the Siq, a mile-long narrow gorge that opens up to the City of Petra. This trek has been recreated in three dimensions in Passing Through Petra and is more than just something to make the game look pretty. The Siq is a main feature of the game!

Passing Through Petra is all about the ancient market and you’ll take on the role of one of its powerful citizens trying to grow your settlement and reputation. Traders from four different countries will caravan into Petra (along with locals) and your job is to attract them to your market. Your opponents are trying to do the same! 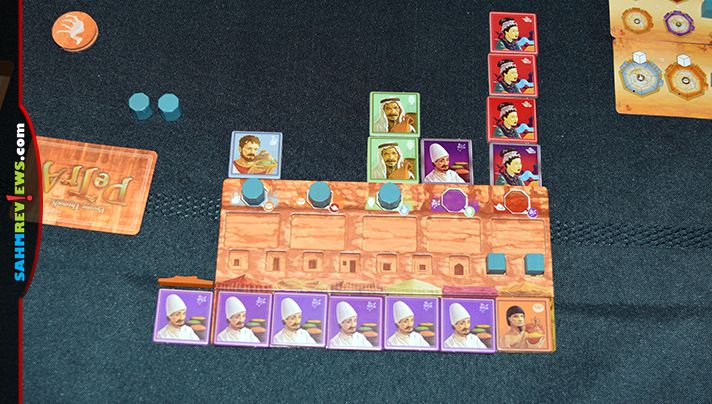 Each player begins the game with a player board, six trader tokens representing travelers, four additional tokens set above the player board denoting settlements who wish to do business with the travelers and one random influence card. Each player also has nine influence cubes, which also are placed on the player board. Matching colored discs are put on the various tracks on the board and everyone’s merchant pawn is placed into the center of the city grid. 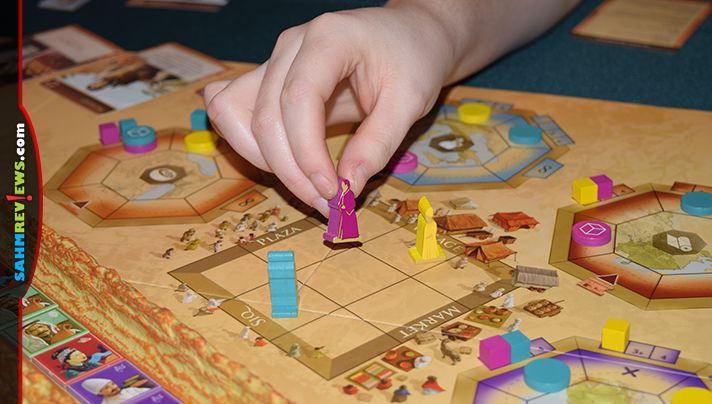 On your turn you will decide which action to take by moving your merchant pawns towards one of the sides of the grid. The direction in which you move determines your choice. If you head towards the Plaza, you will attract two new traders from the plaza area on the board. The plaza is the front of the caravan that has already made its way through the 3D Siq. Take two traders of any type (colors represent countries from which they originate) and place them on your player board by sliding the other traders to the right. These ejected traders then become part of the settlements and are added to the top of your board. 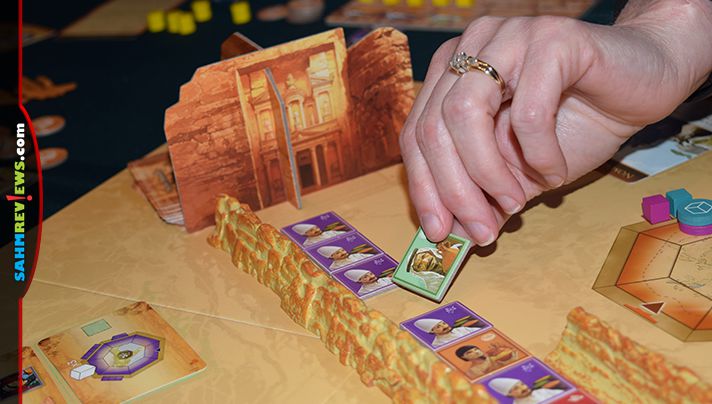 If you don’t like any of the colors available in the plaza, you can choose the Siq action and select one tile from the caravan inside the Siq. This is added to your player board in the same manner, with the ejected trader being added to the matching settlement.

All of this is in preparation for a visit to the Market, another action choice. When visiting the market, you will designate one of your settlements and announce which trader country they want to conduct business with and place one of your octagonal workers in the designated space. Each player board is different, with colored settlements wishing to trade with a different color of trader. Count the number of tiles in the chosen settlement and multiply it by the number of Trader tiles of their desired color on the bottom of your player board. This result is the number of spaces you’ll move on the corresponding track (matching the settlement). 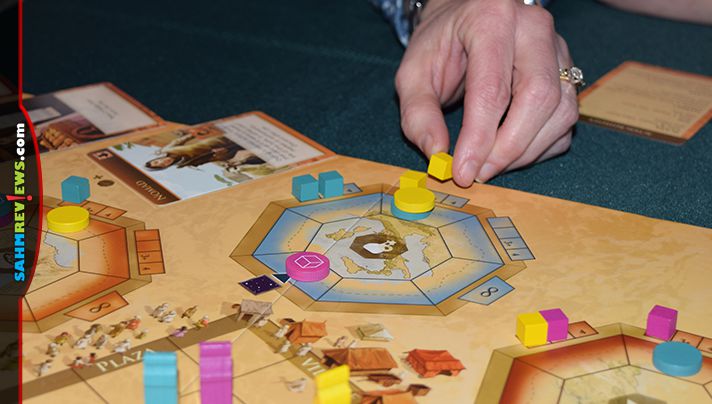 The four country tracks each award a different reward as you make your way clockwise around the circle. You will move your disc a number of spaces equal to the multiplication result you earned. Additionally, once you pass the printed reward space, you are allowed to flip over your disc, revealing a wireframe cube printed on the other side. When your disc reaches one of the designated influence spaces, you may move one of your influence cubes from your board onto the track. All four country tracks operate in the same manner and allow for the placement of influence cubes. After you are done moving, any Traders in your settlement are returned to the bag. 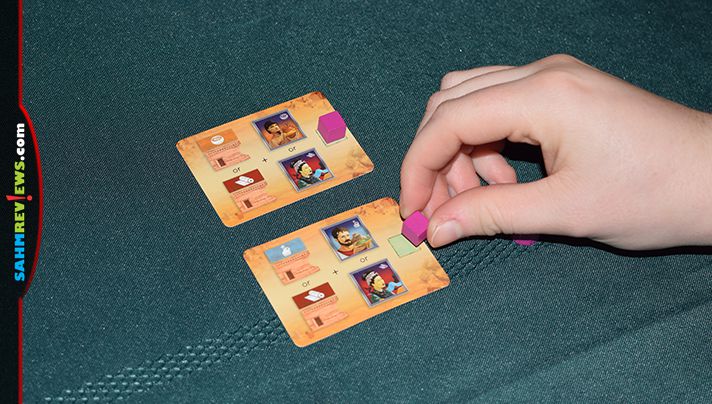 The green track, also referred to as the “Local” track, is resolved a little differently. You’ll still move clockwise around the much larger path, but instead of dropping influence or receiving one-time rewards, you’ll earn a camel or an Influence Card each time you pass over one of the matching spaces. Camels allow you to move forward an additional space on the track when you take a market action, while Influence Cards are another way of spending your Influence Cubes by completing the challenge shown on the card.

The last action choice you have is called “Village” and sends your merchant out to hire a local villager. Remove one or more of your workers from your player board and take one of the three Villager cards on the board. These cards may give you ongoing game bonuses, instant bonuses or one-time actions you can take at a later time. This also frees up the settlement by removing the worker (you cannot take a market action in a settlement that already has a worker). 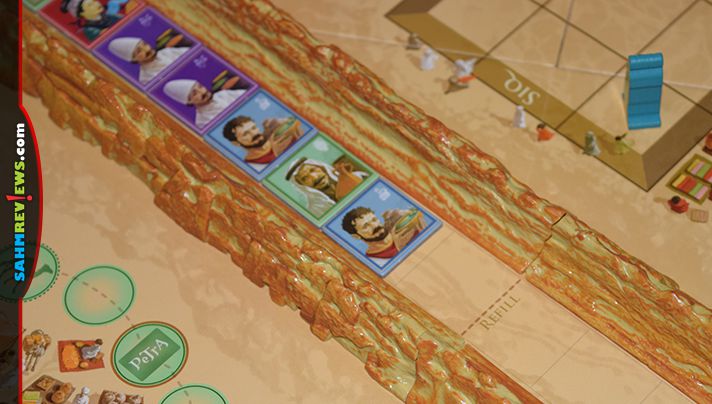 Any time the number of traders in the Siq falls below the minimum (marked on the board), one player will draw new tiles from the bag and completely refill the gorge. Passing Though Petra is unique in that there are no scores to keep. To win, you must be the first player to successfully place all nine of their Influence Cubes onto either the board or completed Influence Cards. If you do so, you are the immediate winner of Passing Through Petra! 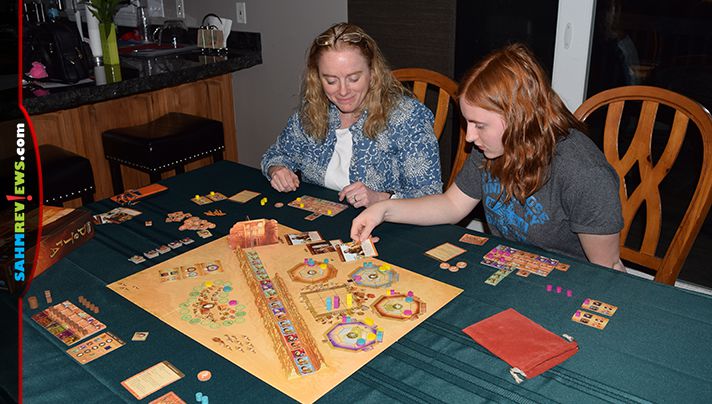 We would place Passing Through Petra in the same difficulty category as Gold West and should also be a fantastic game to introduce new players to the world of hobby games. This one requires you to plan your turns ahead by looking at the caravan and determining your future plaza and market visits. All while hoping the other players don’t draft the Traders you want! You’re ultimately trying to maximize your market visits by having a good balance of tiles in both your settlements and in your market row. It won’t take long for you to realize that three settlements and three traders (nine movements) is much better than one settlement and five traders (five movements).

Passing Through Petra has been an extremely popular issue by Renegade Game Studios. You should be able to find a copy at your local game store. If not, hurry over to Amazon, where there are only a handful of copies left! We’ve taken a look at Renegade’s list of upcoming games on their website, including a Kickstarter campaign that you can still get with a late pledge! If you don’t want to miss out on their next one, be sure you are following them on Facebook and Twitter!

Were you familiar with the story behind the famous City of Petra?