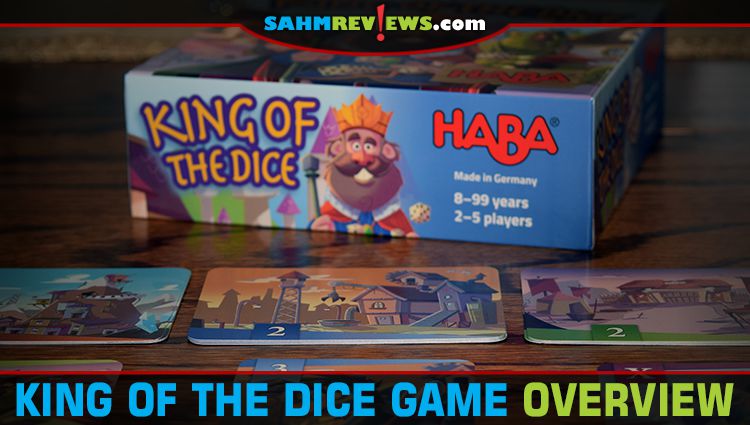 King of the Dice Game Overview

We spent part of this Christmas break visiting my mother-in-law in Alabama. Unlike the longstanding “in-law” jokes, we actually get along really well and I enjoy being around her. Knowing there are limited options for activities we all enjoy, we always bring along a stack of games to play in our down time. As part of our packing process, we carefully curate a variety that we know she would enjoy if she opted to join us. Often she will politely decline and sometimes she’ll join after some convincing from the granddaughters. But other times she is able to look at the game – and the components – and agree right away. That was the case with King of the Dice from HABA. Dice games generally aren’t intimidating to people who don’t regularly play games and we were counting on that being the case here. We were right. 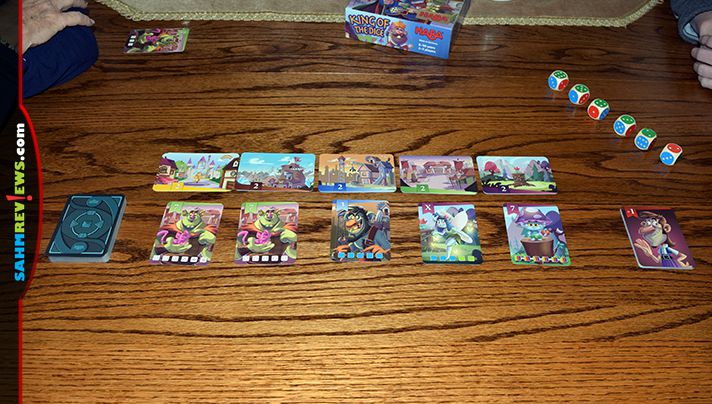 The concept of King of the Dice is simple: You are a king with a beautiful kingdom, but lack the most important thing… citizens. You will be competing with the other kings to see who can entice the most new residents. Setup involves looking at the backs of the cards separating the different types (colors) of cards into stacks. There are 15 Village cards which will be divided and stacked numerically by type with the lowest number on the top of each. Lay these 5 piles in a row in the center of the play area. Shuffle the Penalty cards and Citizen cards each independently. The 40 Citizen cards are placed to the left of the Village cards and will be used as a face-down draw pile. One card from each is placed in a row below the row of Village cards. The stack of 10 Penalty cards are placed face-up to the right of the play area. A first player is determined and that person takes the dice to begin. 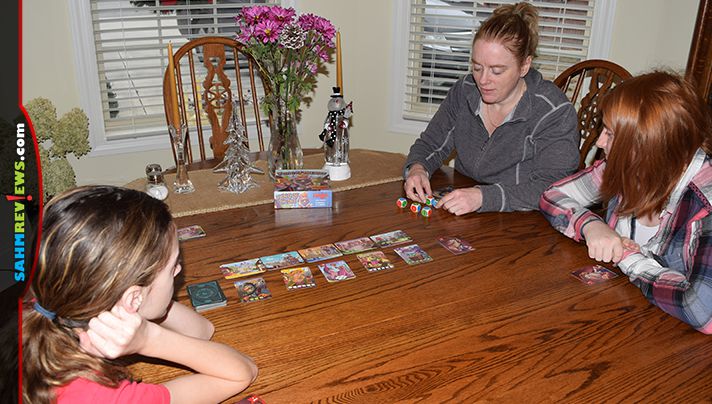 In order to recruit a citizen, you’ll need to meet their demands (in dice form). Their requirements are noted at the bottom of the card while their victory points are shown on the upper left. Some have special abilities, but I’ll talk about that more in a minute. 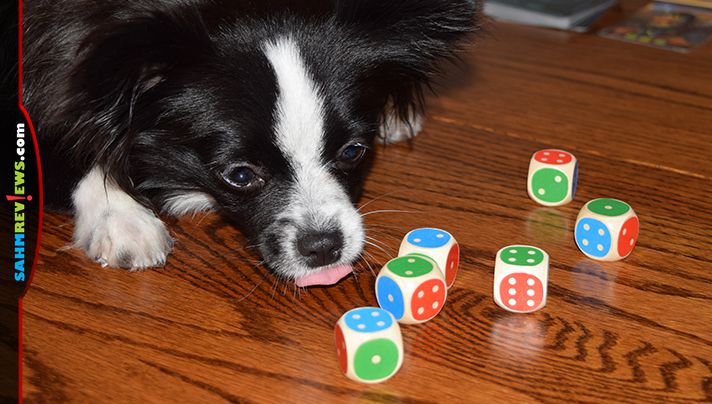 Each turn involves three steps. First, you’ll roll all six dice and see if any match up to the requirements on any of the face-up citizen cards. Like Yahtzee, you can set dice aside and roll the remaining for a total of three rolls. 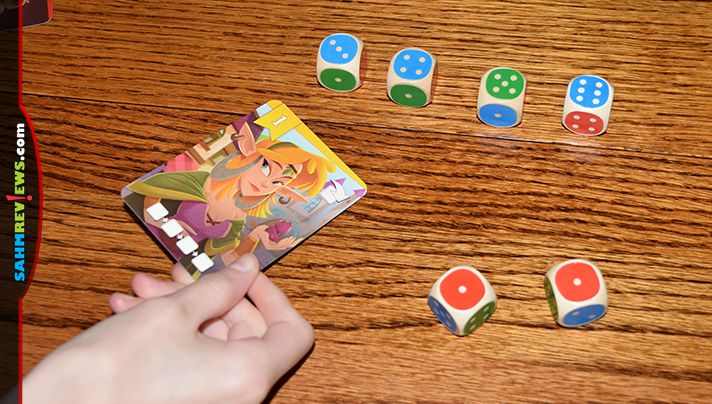 When you’re ready to stop – or after the third roll – you may acquire a new citizen if you meet their demands. Some cards require you to have a certain number of a particular color or value of dice while others may require the dice values to form a straight. If your dice are aligned then you may recruit ONE citizen whose demands you can fulfill. In the event that citizen happens to be in their corresponding village (the colors match up) then you’ll also take the topmost card from the village stack as well. Add these face-up to form a kingdom pile in front of you.

Shadier characters are also seeking refuge. If you’re unable to meet the demands of the law-abiding citizens then you’ll be faced with the penalty of a Scoundrel card. Add it to the top of your kingdom pile and be prepared to deduct their penalties when you’re tallying your final score.

I mentioned that some cards have special abilities. Some of those include being able to take an additional turn, recruit a second citizen or even send a dragon (those are negative points!) into another kingdom. It allows some diversity in the game beyond simply relying on a good roll of the dice. 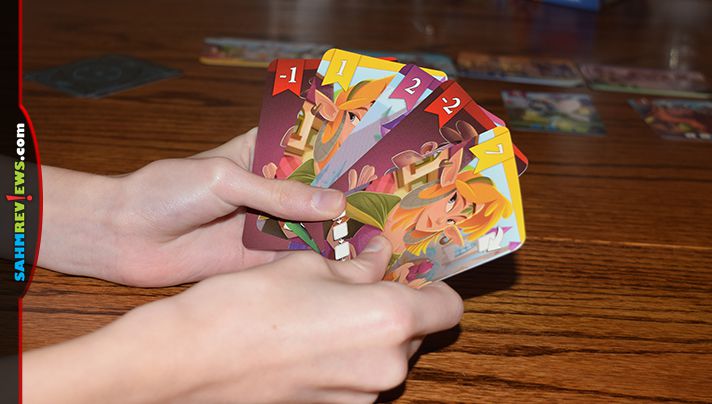 At the end of your turn, you’ll shift all the citizens right one village and add a new potential citizen to the leftmost spot in the row. If you happened to take one of the Scoundrel cards, you’ll wrap up your turn by removing the right-most citizen and placing him in a discard pile next to the Scoundrel deck. All remaining citizens are shifted to the right and a new one is added. This ensures that there is a continuous variety of citizens (and related card requirements) available to work on. When any one stack is depleted (the Citizen draw pile, the Scoundrel pile or one of the Village stacks) then the game ends immediately. Points are tallied and the one with the most victory points wins.

King of the Dice can play up to 5 people and has enough similarities to Yahtzee that can even be played by kids younger than the recommended age of 8. Copies are available on Amazon or direct from HABA. You could also ask your local game store if they have copies available. HABA offers a variety of games for young kids as well as strategy games (and a lot in between). Visit them on Twitter and Facebook to decide if you want to be part of their kingdom.

Who in your family do you have to coax into to play games?

3 comments on «King of the Dice Game Overview»