Nicole’s been talking about the handful of games we toted around for Christmas so we had something to play as a family during holiday down times. Many of these made it to the table more than once. King of the Dice and Stuff Happens were two smaller games that were easy to teach, quick to play and provided a lot of entertainment. There was at least one other that fit into a purse or backpack and had a familiar enough feel to the game play that we weren’t hesitant to try it out on family members who have never played modern board and card games.

It also didn’t hurt that we’ve been long time fans of the titles produced by Green Couch Games. In the past couple of years we’ve seen them grow from just a few titles to offering up new ones every time we see them. We’ve told you about Outlawed! and Best Treehouse Ever (among others), but the cherry on top went to last year’s coverage of Rocky Road a la Mode. That game showed us how hot the team at Green Couch Games had become! 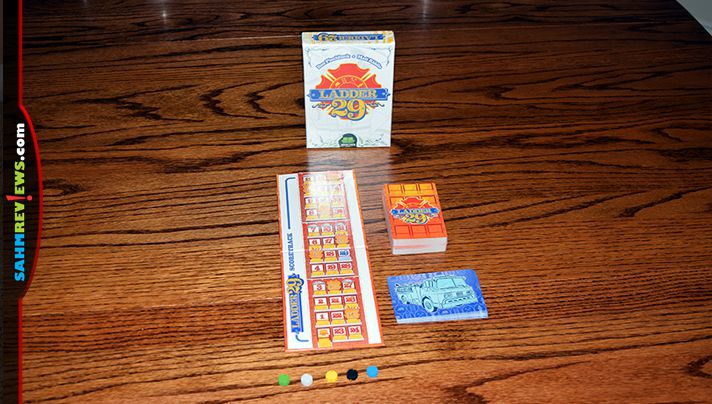 So we’re going to fan the flames with a firefighter-themed card game, Ladder 29. We originally had the opportunity to play a copy at 2017’s Gen Con convention, but weren’t able to bring home one to share until this summer. Since then it’s been a hit filler game at our weekly game night gatherings and an obvious choice for our vacation travels. 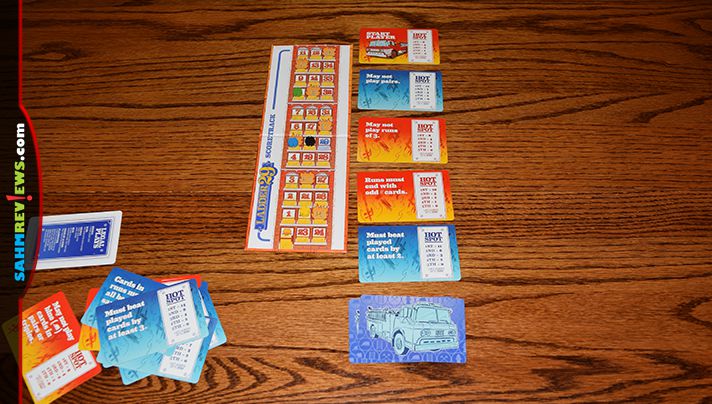 Similar to a couple other cards games we’ve featured, Ladder 29 is a round-based exercise where you are trying to be the first to rid yourself of all the cards in your hand. Each player (up to five) is dealt a hand of 13 cards. The deck is comprised of sixty regular cards numbered one through fifteen in four suits and a handful of special cards. An additional sixteen Hotspot cards are shuffled and dealt out in the center of the play area, one for each player. 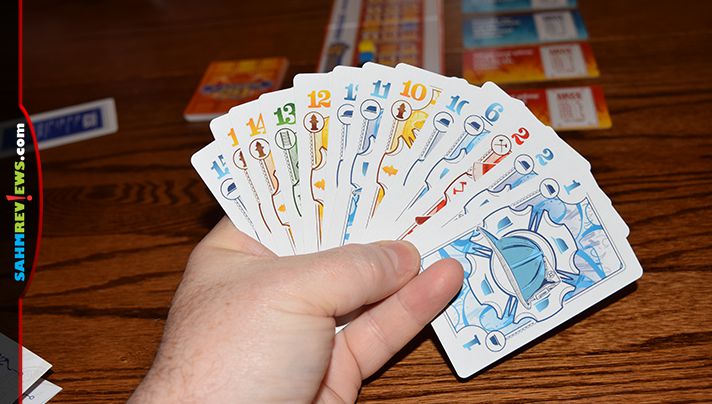 A round is broken up into three parts. First, all players examine their hands and pass three cards to the player on their left. Next, in reverse scoring order (whomever is in last goes first) players select one of the face-up Hotspot cards from the center. These cards not only give you certain restrictions for the round, but also set the scoring criteria. Scoring in Ladder 29 is based upon when you exit the round by playing your last card. Obviously being first nets you the most points, but the harder and more inconvenient the Hotspot card you chose, the more points the round is worth to you. Each successive space (2nd, 3rd, etc.) is worth fewer points, with the person remaining at the end still holding cards receiving zero points for the round. 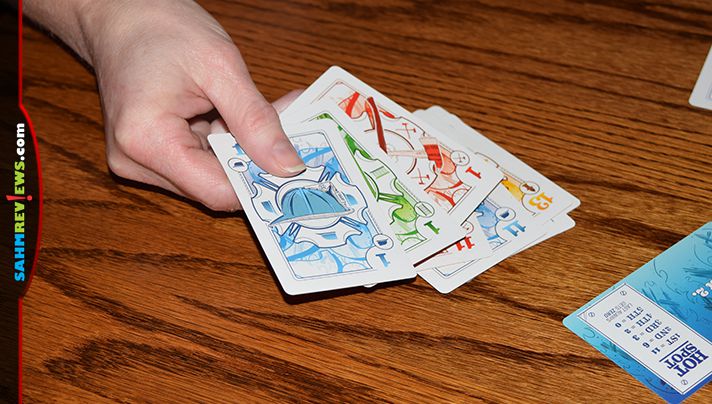 Lastly, you’ll begin playing your hand of cards. The player who has the lead begins the first trick by playing an legal card or set of cards. This could be a single, pair, triple, four-of-a-kind or a run. Following players must play sets of the same type as the lead and of a higher value. If you cannot (or choose not to) play, you may pass. You cannot reenter the trick, but can play again once a new trick has begun. 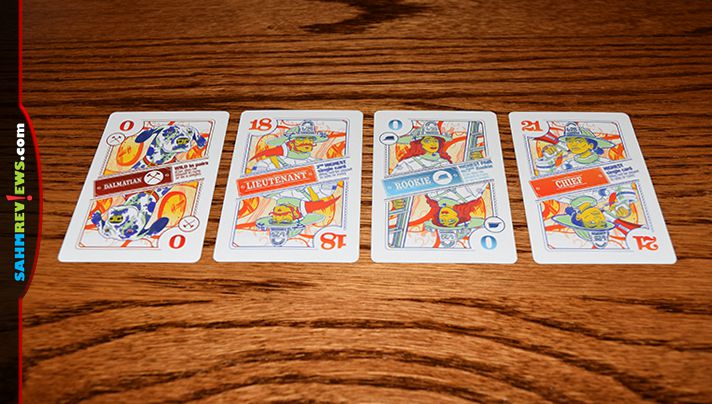 Special cards add a little chaos to an otherwise straightforward game. The Chief can only be played as a single card and is considered the highest ranked single. The Lieutenant is also played singly and is the 2nd-highest single card in the deck. Rookies can be played in a single or in a run, and have a value of zero. BUT, if played together in a pair, they are considered the highest ranking pair in the game, beating even a pair of 15’s. Lastly, the Dalmation is also a zero value when played as a single, but is wild when played as the second card in any pair!

When a round ends with all but one player having played all of their cards, everyone scores based on their Hotspot card and another round is begun in the exact same manner with new Hotspot cards being dealt from the deck. Ladder 29 continues until at least one player reaches a total score of 29 or greater during end-of-round scoring. That person is the winner of Ladder 29!

With the main mechanic of playing higher card types to take control of the round, Ladder 29 mixes things up with the unique aspect of allowing the player to choose their scoring ladder. Picking the correct one to go with the cards in your hand will guarantee success, but only if that card is still available when it becomes your turn to choose. We found that a full game of Ladder 29 lasts only about 20 minutes, much less than the advertised 30.

You’ll find hot copies of Ladder 29 on Amazon for under $20 or at your favorite local game store. This isn’t the last we’ve heard from Green Couch Games, so make sure you’re following them on Facebook and Twitter to find out what’s coming out next!