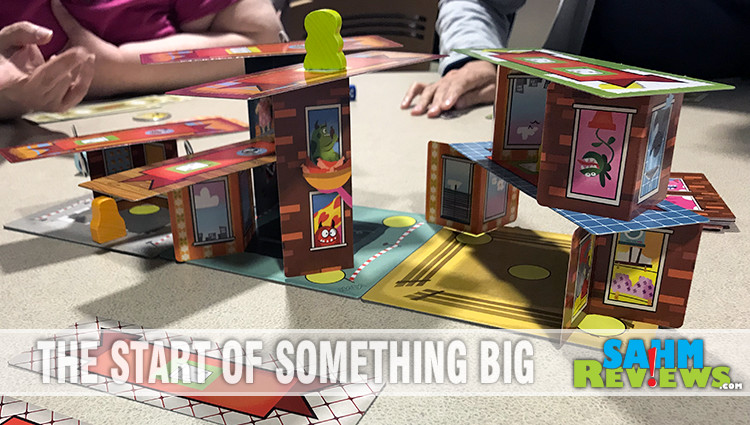 It sure is a small world. It makes sense to me when I find mutual acquaintances or cross-connections within a similar group, but I’m always amazed when my different worlds collide. Recent interactions with Rhino Hero Super Battle from HABA had both these things happen and it still has my head spinning. The first time I brought it to our local game night, it didn’t take any time at all to find people who wanted to join the game. After all, many were already familiar with the original Rhino Hero game. What did surprise me was that someone who was fairly new to the meetup decided to join us and this was the first time I had a chance to interact with him. Turns out, not only is he a gamer, but he’s also a member of the local symphony and friends with Madison’s horn and cello instructors. Making someone feel comfortable in a new setting is easy when you have other things in common with them.

As you know, we enjoyed the game so much, we decided to include it in our list of games for younger kids. That’s when things got more interesting. A friend who works for a game publisher sent me an email telling me that Rhino Hero Super Battle is her husband’s game. We had met him a couple years ago and it was fun to know this news.

Aside from the crazy intersections of my various worlds, I’m sure you are curious about the game itself! Let me start by saying that HABA games often are labeled for ages “5-99” and Rhino Hero Super Battle is no different. While kids as young as five are able to play this game, it’s also extremely fun with a full compliment of players who are all adults.

Rhino Hero Super Battle is a 3D stacking game where you are working to not only build a tower, but also get your superhero higher than all the others before the building collapses. The game includes a game board, tall walls, short walls, floors, dice, super heroes and monkeys. Sounds like quite a goofy combination, doesn’t it? It is. But it will all make sense in a minute as I explain all the different parts and how they come together. The three game bases are placed next to each other in the center of the table. Each player begins with three randomly dealt floor tiles (which you’ll keep hidden from your opponents). Each player selects a superhero which they’ll be responsible for moving during the game. Monkeys, a draw stack of floor tiles, dice and stacks of the walls are placed within reach of all players. Three floor tiles are placed face up for refilling your hand each round. Now you’re ready to build! 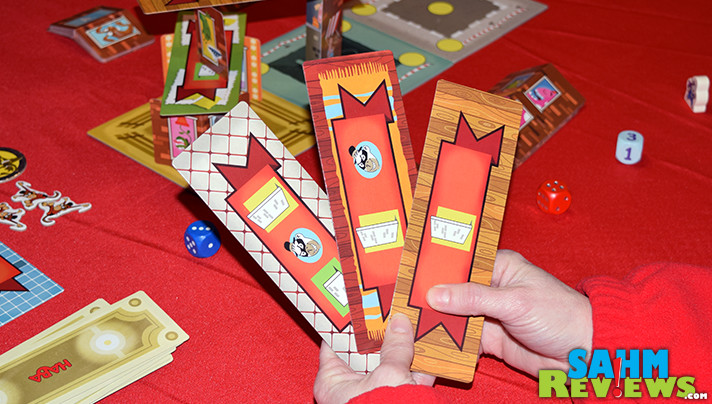 On your turn, you’ll go through a series of steps. First, you’ll select a tile from your hand that you wish to add to the growing skyscraper. The tile you choose indicates what you’ll be using as a base for underneath the floor tile you just opted to use. It will display either one or two wall tiles as well as potentially a monkey who is out to cause mischief. Some walls are short. Some are tall. Each wall will need to be placed on a yellow dot on the base or on any existing floor. A floor tile displaying one tall wall means you’ll place exactly one tall wall, a card displaying a short wall means you’ll place one short wall, if it displays two, you’ll place two and so on. More about those mischievous monkeys in a minute. Sounds easy enough, right? Wrong. 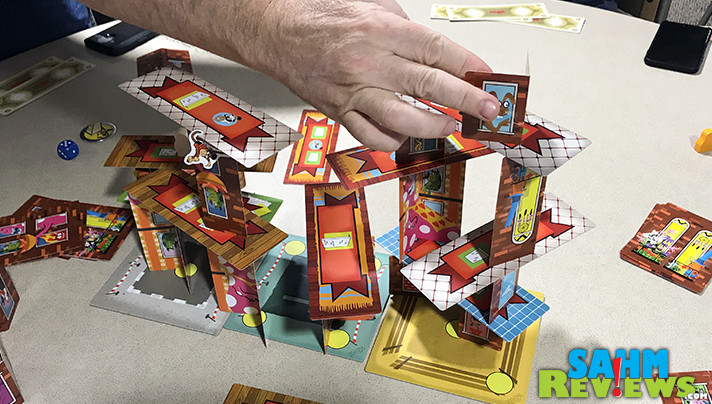 When you place walls, you have to be careful not to knock down everything that is already there. While you may have selected a card with two walls to give your floor a sturdy base, you’re going to be tasked with placing it on something someone else already added to the tower… and it may not be so sturdy. Floors also have to be parallel to the ground. If you have a floor that requires one tall wall and one short wall, that means you’ll be placing those pieces on two different levels of the structure so the floor will be flat when it’s placed. 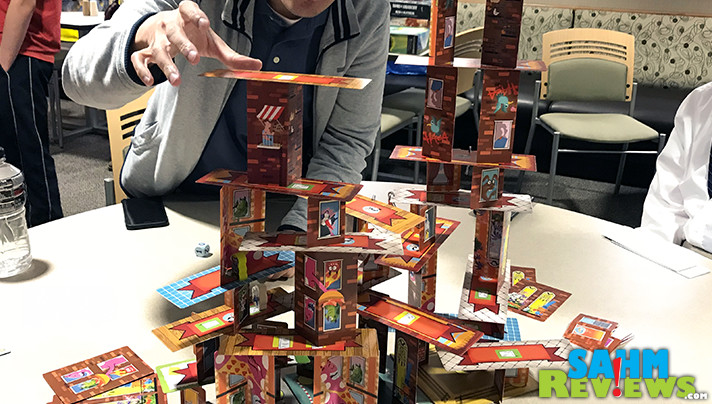 Once you’ve successfully placed your wall(s), the next step is to place the floor. You are only allowed to utilize the wall(s) you just put in place. That means you cannot use an existing floor of the structure to give your new floor added support. If the floor card depicted a monkey, you’ll need to take an available monkey from the supply (or if one isn’t available, the lowest on the structure) and hang it from your floor. A steady hand while placing a wall or floor may not be so steady when trying to get a lopsided monkey to grab hold.

Most stacking games like this, including its namesake, create a single upward structure. With Rhino Hero Super Battle, the only rule is that any walls placed on the first level have to be on one of the starting dots. Beyond that, it’s all fair game. The entire structure ends up being all willy-nilly with floors facing different directions. 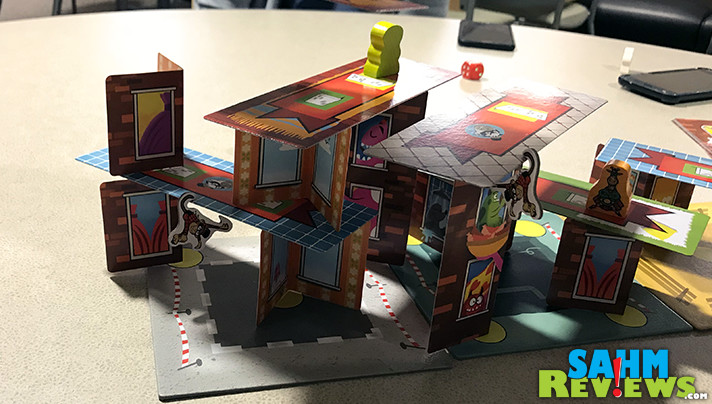 After you have successfully placed the floor (and possibly monkey), it’s time to put your superhero to work climbing the skyscraper. Roll the light blue die and move up or down the designated number of levels. If there’s already a superhero on that level, you’ll battle! Hence the name of the game! The attacking hero rolls the red, even-numbered die while the defender rolls the blue, odd-numbered die. The player with the lowest roll moves down a level. If there’s a hero on THAT level, the dueling process takes place between those. Whomever is on the highest level places the superhero medal in front of them to indicate they’re the current leader. At the end of your turn, you’ll draw a new floor to add to your hand, then play passes to the left.

At any point in time, if the entire structure topples, the game is over. The player who was highest on the skyscraper before it collapsed is the winner UNLESS that’s the person who knocked it down! In that case, everyone else wins.

Rhino Hero Super Battle doesn’t require a lot of thinking but it does require concentration. As I said, it’s good for kids, but it’s great for adults. You can pick up a copy of Rhino Hero Super Battle on Amazon for under $30. HABA has an excellent assortment of children’s games and recently added strategy games to their product line. Engage with them on Facebook and Twitter to find out what new games they’ll be releasing next.

Do you have a steady hand for games like this?