Every day I am reminded that my youth is far behind me. The aches and pains (and memory loss) are as emotionally challenging as they are physically. But I’ve lived an average life without a spotlight, so the trials and tribulations I experience are only visual to those nearest to me. I cannot imagine how difficult it would be if I was a superstar facing the same challenges under the watchful eye of the world, of the public, of my fans. How difficult it would be to look in the rear view mirror only to see the top of my game fading into the distance. Then cough as I breathe in the dust being kicked up by the next generation passing me by.

As I mentioned in my exclusive interview with the writers of Cars 3, a movie isn’t going to be very interesting unless there is some kind of challenge that needs to be overcome. While struggling with how this related to Lightning McQueen and how to make a Cars sequel interesting, they realized they need only look into the reality of the celebrities we have grown up with.

During the Cars 3 Press Conference at Sonoma Raceway, this concern was the very first question that Director Brian Fee addressed, “With McQueen, it just took a little research, we started talking to Jeff Gordon, we started to talking to other athletes and we started seeing people who were at the top of the game who were big celebrities, who had it all and, and they’re facing you know, the, the expiration date that all athletes have.” He later went on to explain that “John Lasseter always says we won’t, we won’t make a movie if we don’t have a story we think is worth telling… we always want to make sure we have problems that people can identify with.” Aging. Yup, THAT is a subject we all can relate to. 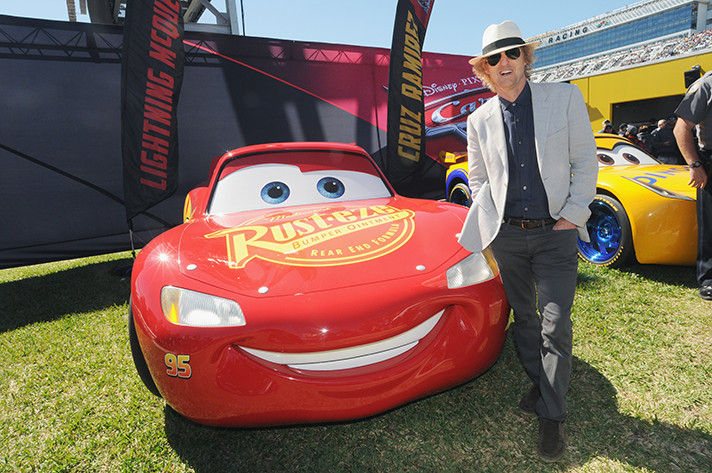 You can read more details about the process of the story, how the history of racing played into Cars 3 and Pixar production pipeline in prior features. What I found most fascinating about the press conference with Director Brian Fee, Producer Kevin Reher and Co-Producer Andrea Warren were the behind-the-scenes tidbits about the actors and more specifics about the characters themselves. As an example, when asked what it was like to work with Owen Wilson, Brian Fee expressed an appreciation for how collaborative the actor who voices Lightning McQueen is. While he is hired to provide voice-over, Owen puts on his writer’s hat while reading the lines. Brian Fee recalled one point where Owen questioned McQueen’s lines and offered alternatives. These are the ways that Pixar puts the final outcome first. If there is room for improvement of any kind, they do it – no matter where the feedback comes from. “And you know, often what ends up on the screen is something that wasn’t necessarily on the page that we started with.  And… to me, that’s exhilarating, you know, that’s, as close to improv as you can get in the animation world.”

Oh, and Nathan Fillion… I’m wasn’t surprised to hear Brian Fee gush over how charming in person Nathan is because it comes through in pretty much every character I’ve ever seen him play. Brian claimed that he’s a fast worker, high energy and very gracious. “He’ll give you seven takes, they’re all perfect, they’re all different, but they’re all perfect.  So, whichever one you use, you left six great takes on the floor that you can’t use.” Producer Kevin Reher shared how much Nathan loves animation, “He flew himself up to Pixar to meet us before we even cast him in Cars 3, just because he loves animation and wanted to come and see Pixar.”  I vote that he get his own movie. I don’t care what it’s about… I would totally go see it.

Then there’s Jackson Storm. He is the quintessential millennial. Me, me, me, me. His lines are swift and feel like backhanded compliments. They didn’t want to have him come across as a villain. “We never wanted him to be a mustache twirling bad guy, we just wanted him to be you know, a younger generation that no longer has respect for the people that came before him ’cause it’s just all about them.” Co-Producer Andrea Warren chimed in, “some of it’s just naïve, you know, arrogance.”

One last thing for you to think about as you wait (im)patiently for June 16th when the movie releases… Easter Eggs. They are notorious for adding Easter Eggs on the Pixar campus in addition to their movies. When asked how many viewers should look for in Cars 3, Brian Fee admitted “You know, I will probably never know how many Easter Eggs… because believe it or not, downstream, people put them in without me even knowing it.  I was, you know, just watching the other day, we have a scene where the characters are going through the woods at night and I said, ‘‘what is that over there?’  It’s a highlight bouncing off something back there, and they told me, ‘oh that’s a moonshine still.’  The sets department put a moonshine still in the woods.  And you’ll never see it, you know, it’s, it’s dark scene, they just, were having fun.  And of course we have Frisbees on the roofs like we always do in Pixar movies.  But, I think I will probably be a very old man by the time I find all the Easter Eggs myself.” Kevin Reher confirmed that Sterling’s office is A113 which represents the classroom at California Institute of Art used by John Lasseter and other graphics artists in addition to the traditional Pizza Planet truck. All of which are considered good luck charms by the Pixar team.

Of course, Andrea Warren confirmed one to be on the lookout for, “We always put a nod to the film that’s coming after us and so we do have something in that from Coco, a little nod to Coco in that.”

With all that in mind, including the prior features, what are you MOST excited about for Cars 3?

9 thoughts on “From the Director and Producers of Cars 3”