Time and time again I’ve lamented on how my reflexes just aren’t what they used to be. This became very evident when we played Jungle Speed and Quick Cups. And it’s not just hand speed, it is thought processes as well. Either age is catching up to me or we’ve bred some kind of mutant superkids. I’m hoping for superkids.

These types of dexterity games are ones we’re sure to always lose. But we play them anyhow as any family time is precious and we know is soon to be replaced by summer jobs, friends and eventually college. Plus, teaching our girls to be good winners as well as losers is a skill I wish more parents took the time to instill in their kids. 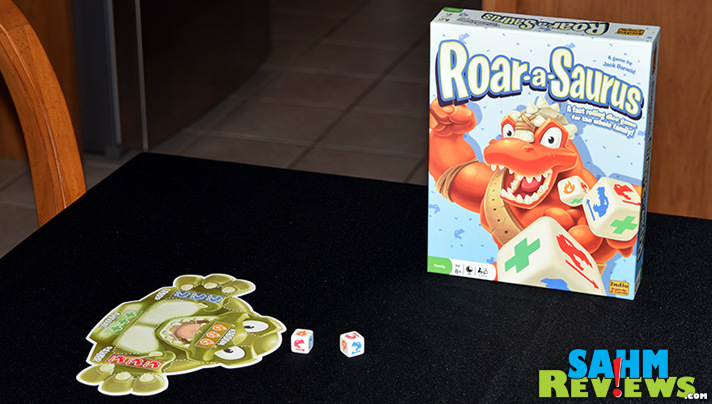 So we went into Roar-a-Saurus by Indie Boards & Cards knowing ahead of time what the end result would be. And we were fine with it because not only did we want family time together, we actually love dice games. And the thought of one where you all roll at the same time (and attack each other!) was something we had to experience for ourselves. 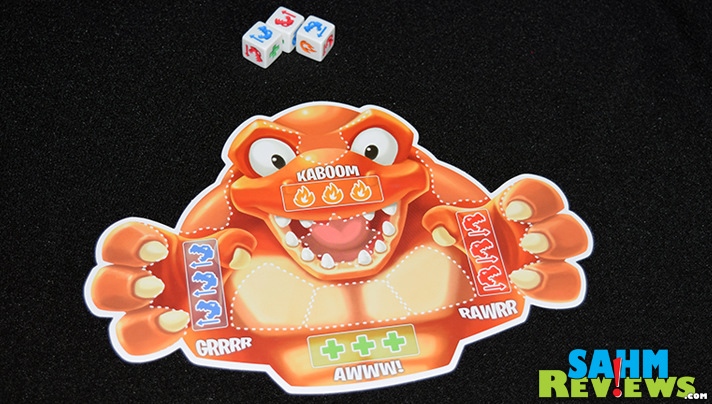 Billed as “A fast rolling dice game for the whole family!”, Roar-a-Saurus is probably better described as a “Battle Royal for the Prehistoric Age”. Each player controls a dinosaur that is trying to be the last one standing after multiple rounds (is this how dinosaurs really went extinct?!). You are armed with only three dice, which you’ll roll and use to attack other players.

Each die is the same with one of four symbols (two repeated twice) on each face. Everyone rolls simultaneously and is attempting to create a set of three like symbols matching the action they wish to take. Three of either the left- or right-facing dinosaur heads allow you to attack the player to the left or right of you (calling out the attack type – “Rawrr” or “Grrr” for one point of damage. 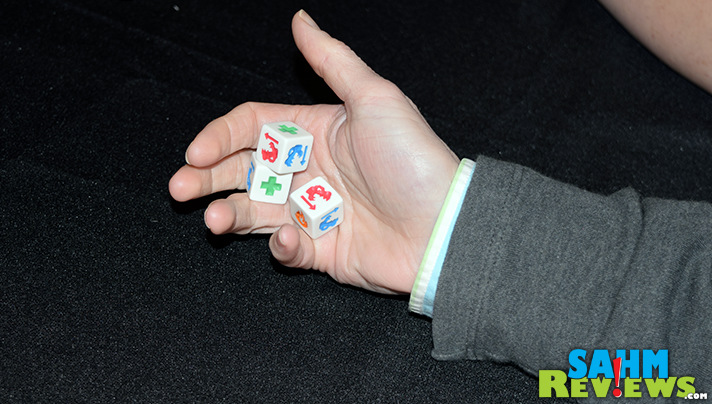 Three of the fire symbol causes an explosion (“Kaboom!”) that deals one damage to all other players and forces everyone to reroll all of their dice, while three green plus symbols (“Awww”) allows you to heal yourself for one point (each dinosaur starts with four health points). 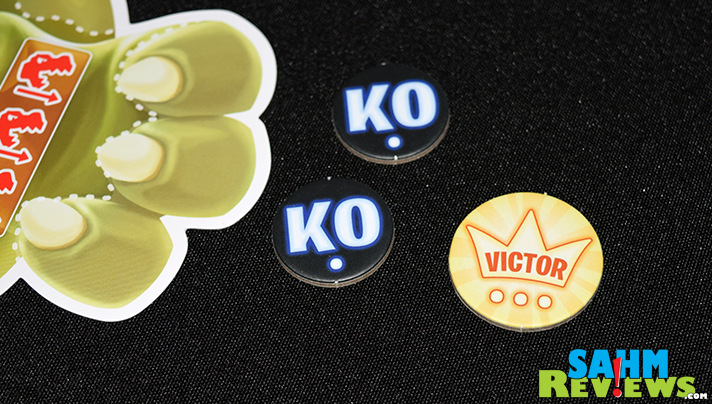 Knocking out an opponent by giving them their fourth point of damage awards you with one victory point token. Being the last dinosaur standing in the battle awards an additional three. Multiple battles take place until one person accumulates 10 or more points at the end of a round. If more than one have greater than ten, highest total wins. Ties must battle one last time! 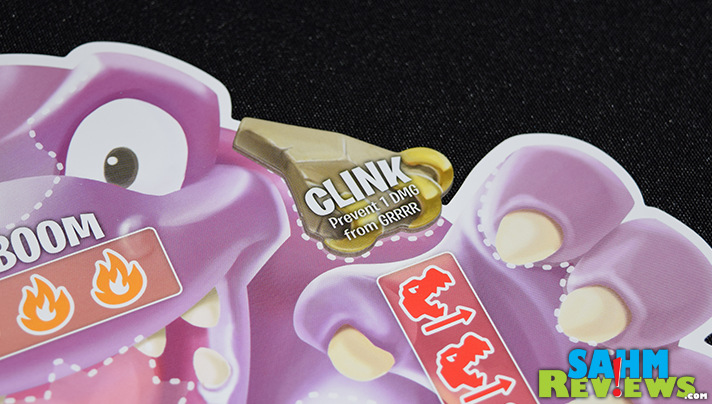 And that’s just the easy-mode version of Roar-a-Saurus. The real fun begins when you play with all of the components and the standard rules. The basics are the same, 10 points over multiple rounds, but now you can upgrade your Saurus every time you perform an “Awww” (healing) action. Choose a power-up from the pile and place it on the corresponding spot on your player mat. 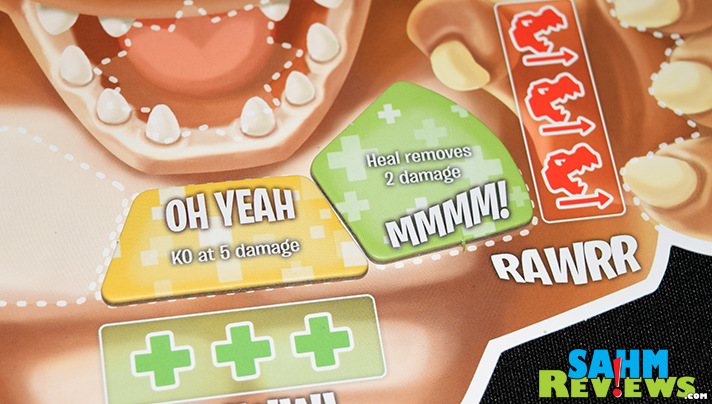 Some of the upgrades include “Swoosh” which makes your dino faster and gives you a fourth die to roll. “Clunk” protects you from “Kaboom” attacks by reducing the damage taken by one. While “Oo Ah” increases the power of your “Kaboom” attacks against everyone else!

The addition of power-ups makes the game that much more social, as you are always required to call out your attacks and defenses by name. The opponent to your right might call out “Grrr Zinngg”, meaning he is attacking the player on his left for one with an upgraded “Zinngg” for another point. You then exclaim “Clink” which means you deflect one of the points of damage and ultimately only take one total. Remember, this is all happening simultaneously and in real time, so if you forget to call out an attack or defense, those points don’t apply!

Designed for up to five players, you can expect a complete game of Roar-a-Saurus to last around 15 minutes. Mix things up by creating your own power-ups or balance the game between older and younger players by limiting which power-ups the older ones can purchase.

The fast-paced action of Roar-a-Sauras is exactly what kids 8+ want in a game, and with the randomness of dice rolling keeps things fair for everyone. Well, except those of us who are getting a bit slower…

Find a copy for yourself on Amazon for around $17 shipped! And be sure to check out Indie Board & Cards‘ extensive library of games on their website. And as always, check out their Facebook and Twitter timelines for important news about new releases!

Would you be a slow or a quick dinosaur?

16 thoughts on “These Dinosaurs Aren’t Extinct!”