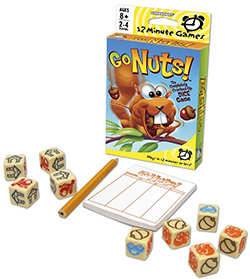 Some of the best game values we’ve found tend to be in the under-$20 category. Not only are they usually small and thus great for travel, but the fun-to-cost ratio is very high. It seems to be true that “good things come in small packages” in the game world also.

We recently had the fortune of playing Go Nuts by Gamewright. We’ve had a lot of fun with some of their other titles that we’ve featured in our Thrift Treasure series like PDQ, Sleeping Queens and There’s a Moose in the House. In fact, we showed you on Wednesday that last one was the #1 most visited game post on SahmReviews in the past six months!

So it goes without saying that we’ve had a lot of exposure to their line and can say many are go-to titles we take when traveling. Go Nuts is no exception, offering great replayability along with great family fun in a box just a bit larger than a deck of cards. 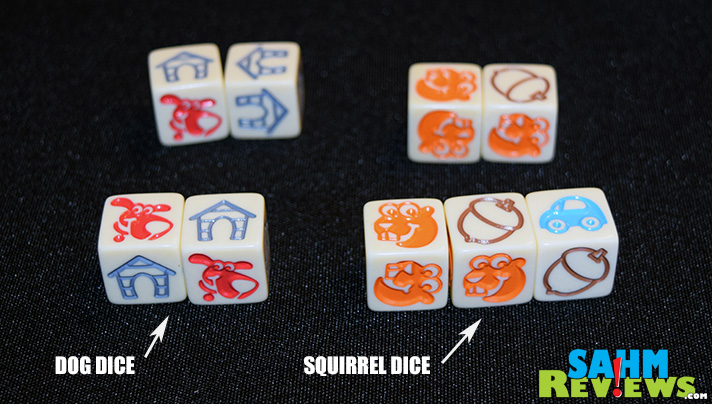 In Go Nuts, you play a squirrel that is trying to collect nuts for the winter, all while avoiding cars and dogs. Of the nine included dice, five go to the active squirrel, while all other players receive one of the dog dice. On your turn you roll all five dice and set aside any acorns you roll (worth a point each). Cars are bad, cannot be re-rolled and if you ever roll all cars your turn ends immediately with no points. You may choose to re-roll any squirrel dice to try and get additional acorns. 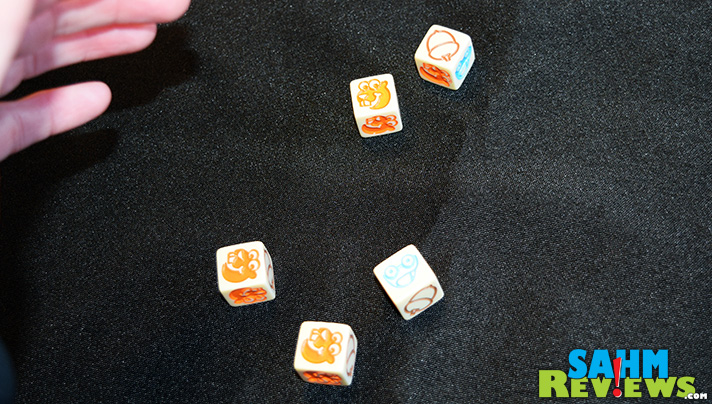 You may stop at any time and record your score for that round. If you continue and roll all squirrels (regardless of how many dice you are rolling), then the magic happens – everyone begins to Go Nuts! You lose all accumulated points for that round, but begin rolling all five dice as fast as you can, adding up your acorn score along the way (announce it out loud as you go). Ignore any cars or squirrels, this round is only about acorns.

At the same time your opponents are rolling their dog dice until each one gets a dog result. As soon as the last player gets their dog, they yell, “Woof, Woof, Woof” and the round ends. You then receive the number of points for acorns rolled and pass the squirrel dice to the next player.

If you are able to roll so successfully during your turn that you find yourself with only one die to roll, rolling another acorn with that last die will allow you to collect all five dice and continue your turn. This is a risky play, as a squirrel roll will trigger the “Go Nuts” round, and a car would force you to lose all of this round’s points. 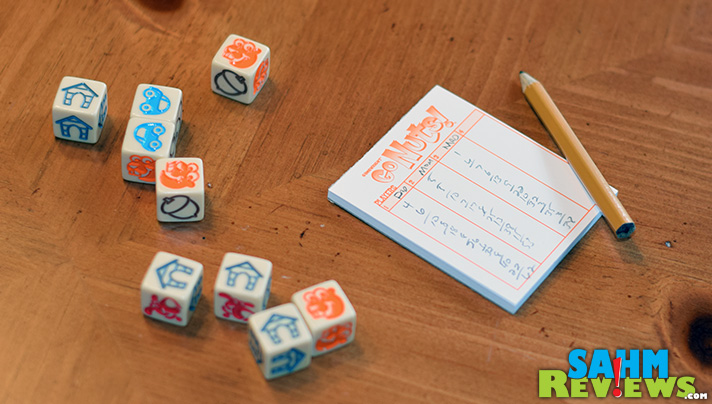 The game is played until one player reaches 50 or more total points, but can be altered depending upon how long you wish a game to be. For us it ran right at the advertised 12 minutes with three players – just long enough to be fun and short enough to not be repetitive.

Go Nuts! is regularly available on Amazon for well under $15 shipped, and can also be found at local big-box retailers and book stores. As I mentioned before, we have enjoyed many other Gamewright titles, so be sure to check out their website and follow them on Facebook and Twitter to see what they’re working on next!

14 thoughts on “This Dice Game Drove Us Nuts”