Last month we published our Semi-Annual Top 5 Games list and asked for opinions about other games you’d like to see featured on SAHM Reviews. The very first comment was for a game we weren’t familiar with, Crossways, but we were familiar with the company. We are fans of USAopoly and their branded versions of the classic game of Monopoly, especially the Simpsons version, and were excited to learn they had branched out with Crossways and a couple others. 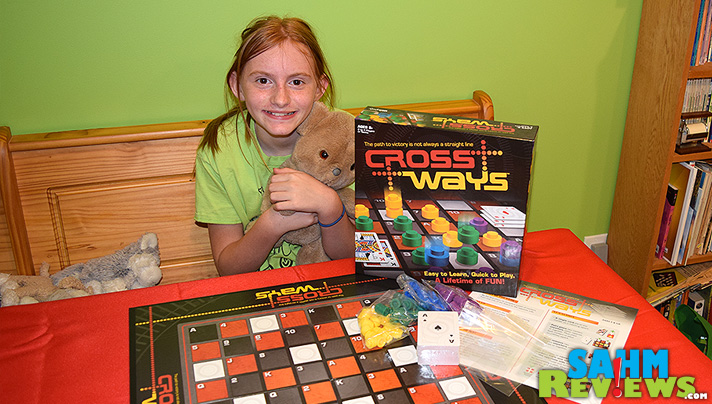 Little did we realize our paths would soon cross (hah, get it?) and we’d be able to try it out for ourselves! Going into this we knew absolutely nothing about the game, how it was played or even what you needed to do to win. I’m happy to say it didn’t take long at all to figure out the rules and get to playing.

But first, I want to point out a little detail that warrants mentioning. This game has a LOT of pieces to it. Twenty-four for each player to be exact. In the photo above you can see them nicely bagged up by the factory, and we all know that once opened it never stays that way. The folks at USAopoly had the foresight to also include four zip-seal plastic bags to put those colored pieces in once you break the factory seals. For this, I commend them!

Now on to the rules. Using two included decks of cards, each player receives five cards. On your turn you have a couple options as you try to build a path of your tokens spanning from one side of the board to the other. 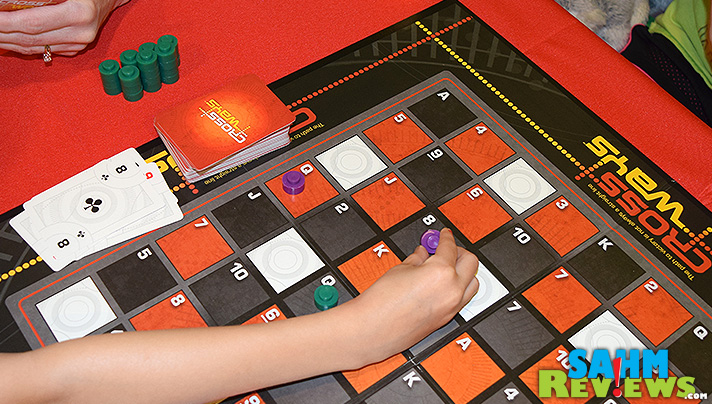 You can play a single card which allows you to place your token on the corresponding square. Here the eight of clubs is played and a token is placed on a black “8” square (there are two of these on the board, which you must choose between). 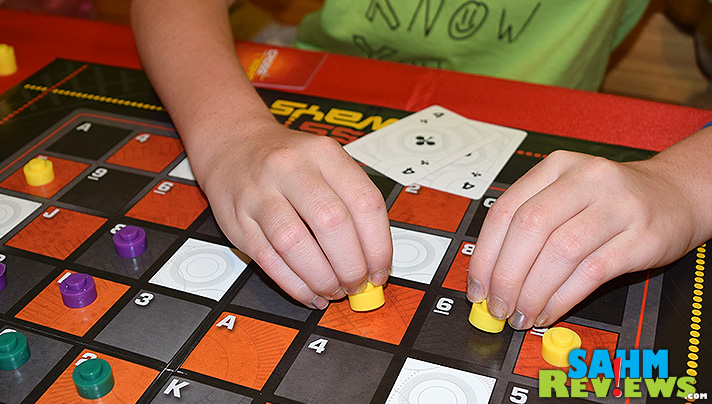 If you have a pair to play (suited or not), this allows you to play two tokens at the same time, but now ANYWHERE on the board. Even the white spaces! Note – you have to play two tokens at a time on a white space to cover it. Three-of-a-kind allows for three tokens and so on. At the end of your turn, regardless of how many cards you play, you draw additional cards to get your hand back up to five cards. 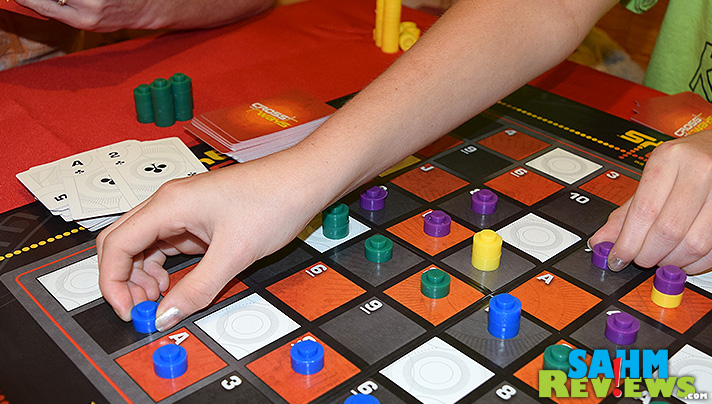 Now here’s a twist – a suited run (in this case a run of two). This permits you to REMOVE any two token from the board! Strategy is key here as you’ll need to remove the best ones to prevent your opponent from proceeding along their path. 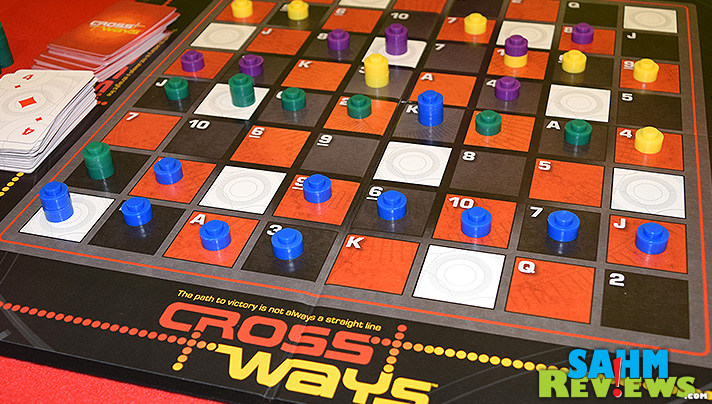 And if you don’t, well “someone” might just sneak out a win quickly! (I played blue.) Our first game ended in under 15 minutes as we all rushed to place our tokens. Our second (and subsequent) games lasted much longer as we began to grasp the nuances of different play choices. Much like one of our favorite family games, Sequence, you must play defense as well as offense when choosing where to put your tokens.

But unlike Sequence, placing your token on an open space does not capture the square – other players can stack their tokens on top of yours, also claiming that space. It is not until two of the same color are on a square that it is ‘locked’. That is, until at least one is removed by another player. There is no such thing as permanently owning a square!

As you can see, the winner of this second game was purple, who was able to sneak a token on the red square before it was capped off by green. This move actually protected purple since when removing you must pick from the top of the tower!

Does this all make sense? If not, USAopoly has put together a nice instructional video to introduce you to Crossways.

We can see why the previous reader requested this game! It is a lot of fun, easy to learn and hard to master! Crossways will definitely be on our ‘keeper’ shelf for a long time to come. It is rated for ages 8 and up and I’ll say that is mostly for the strategy. It could easily be enjoyed by younger kids as well, as long as they were all of equal ability. You can also use it as a party game, as there are team rules included. A half-dozen optional rules are also suggested in case you get tired of playing by the original set or are looking for more of a challenge.

Crossways is regularly available on Amazon for under $25 and you can see what other great games USAopoly has to offer on their website. You can also stay of top of their releases by following them on Facebook and Twitter!

And if that isn’t enough to convince you to buy, then enter our exclusive giveaway and win a copy of Crossways for yourself! Then drop them a line letting them know which of their games you’d like to see us feature next!