During the winter months, we only make it to the gym twice a week but during the summer, we stay pretty active running and biking. No matter what the activity, I struggle to find balance in the foods because my body needs protein boosts from the workouts but I get tired of the same snacks over and over. A few years ago, a friend who used to body build would participate in the cardio strength class at the gym with me. After class, she would have a protein shake consisting of protein powder mixed with water – a habit she had developed from her days of power lifting. I tried it once and let me tell you, it was horrible. The taste was not as labeled (neither “berry” nor “chocolate”) and the texture was chalky… at best. I tried a few different brands and they were equally as awful.

Not long after that, another friend made a protein shake for me that actually tasted pretty good. I don’t know what she was using but I know it was a powder mixed with a milk-alternative product. Not expecting to make a habit out of drinking them, I never bothered to ask what she was using.

Now that I’ve developed more of an interest in my overall health and food intake, I’ve circled back around to trying to find healthy snacks to offset the chocolate and other snacks I like to eat. The folks at Skinny Jane offered to send me a 7-day sample to get a taste for the product in exchange for some honest feedback. Considering prior experiences with chalky, funky flavored protein shakes, I figured this could be an interesting test.

When I received the package of Chocolate Skinny Blend, it included tips on foods to eat to help lose weight. None of that interested me since the same information is readily available all over the place. My only focus was the shake itself; I had plans for breakfast or an after-workout snack since it boasted “a special blend of 7 proteins to maximize fat loss and decrease appetite”. Breakfast is an important meal and sets the stage for my day. Sometimes I have cereal or yogurt but most often I have granola, oatmeal or an omelet. The Skinny Jane protein shake instructions indicated to use 6-8 ounces of skim milk along with 1/4 cup of protein powder. Adding ice is an option also. 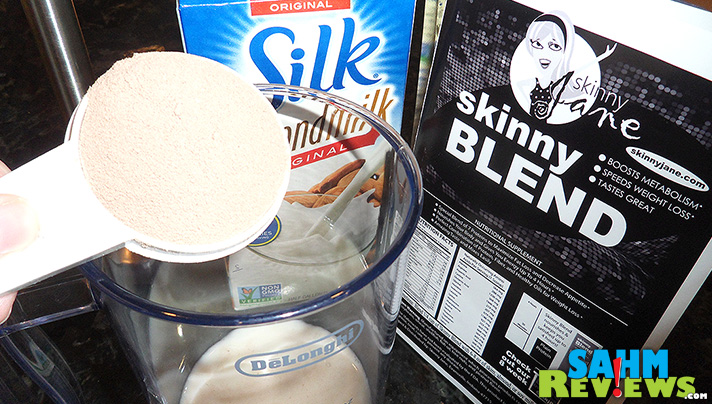 Since I’ve been primarily drinking almond milk, I decided to use that in place of the skim milk. The first day, I added 6 ounces of Silk Almond Milk with just under a 1/4 cup of Chocolate Skinny Blend in my DeLonghi Immersion Blender. I used the whip to mix it up really well. Then I added some ice to give it additional texture and make it seem more like a mocha frappe. 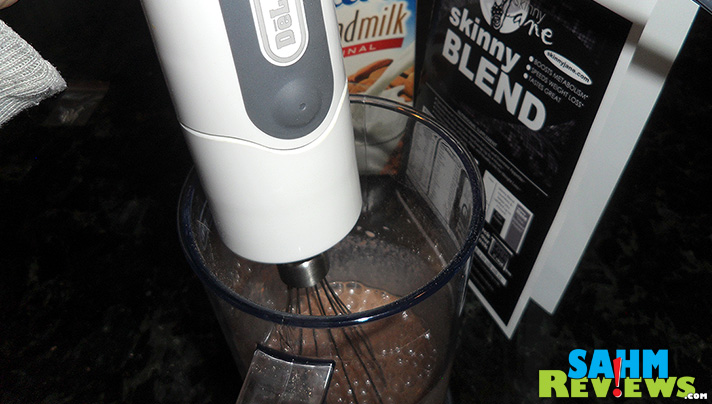 You know what I think? Seriously? It doesn’t taste like the chalky stuff my friend mixed with water. It reminds me a lot of the Carnation Instant Breakfast packets that my brothers and I lived on during high school. It is flavorful and chocolaty. It has a rich taste but doesn’t leave an aftertaste like some mixes. 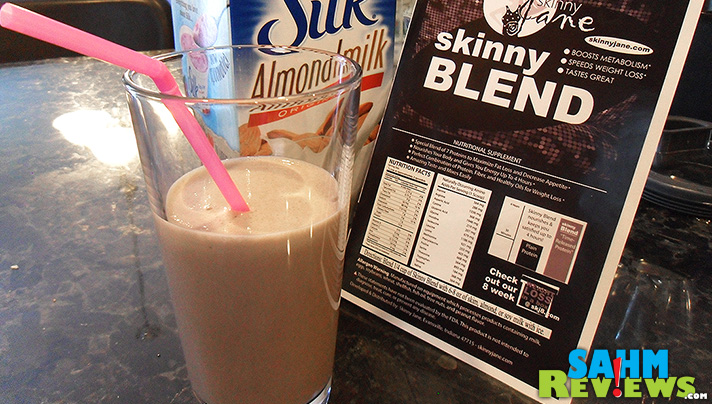 The additional times that I’ve made it, I have added more ice and it definitely makes me feel like I’m sucking down a frappe for breakfast. The extra ice waters down the taste more but it is a trade-off that I am willing to make on occasion to enjoy this treat in a different way. As a bonus, it did fill me up until lunch.

Skinny Jane Skinny Blend is available in four flavors: Chocolate, Vanilla, Strawberry and Banana. A 30-day supply is available from Amazon for just under $40. It seems pricey to me but I’ve checked prices of other protein products at places like Sam’s Club and none are cheap. Considering this one actually tastes good, if you’re looking for this type of protein product then it is worth checking out.

34 thoughts on “Making a Protein Shake for Breakfast”