Just Because There’s an App…

When the iPhone4 was announced, I was one of the few people I knew who was still using a less-than-smart phone.  As a stay-at-home mom with a retired husband, I didn’t see the need for a fancy phone.

Especially since we’re on a family plan with my in-laws.

However… the fact that my MIL (who lives in another state) would be upgrading also and we would all have Facetime made it a different story.  She would be able to participate via Facetime in birthdays and more or just talk to the kids face to face.

Originally, I didn’t think I would use it that much but having it in hand just made me more engaged in social media.  I started working more deeply on projects, uploading to Facebook and Twitter, creating Whrrl stories.  I began playing catchup on apps and downloaded anything/everything that I had heard people talk about along with other apps that I thought sounded cool or useful.

The more I used my phone, the more I gravitated to it.  I started downloading all kinds of apps to test out and see if they are cool, usable, helpful or just fun.  More often than not, I decide they need work and I’ll use them again after I see a few updates fly by.

In the process of working with other influencers, we talk about apps that have social media usage.  A handful of us were asked to test several out to determine their potential – fun, useful, efficient, whatever.  My task – check out shopkick and I-Nigma.  I’ve used both in the past but decided to take a look at them through a different light.  On a trip to Walmart today, I was focused on scanning three items of my choosing.  Kraft Mac ‘n Cheese, Heinz Ketchup and Boetje’s Mustard (a local product) to see how these new apps handled it.  Here’s what I found out: 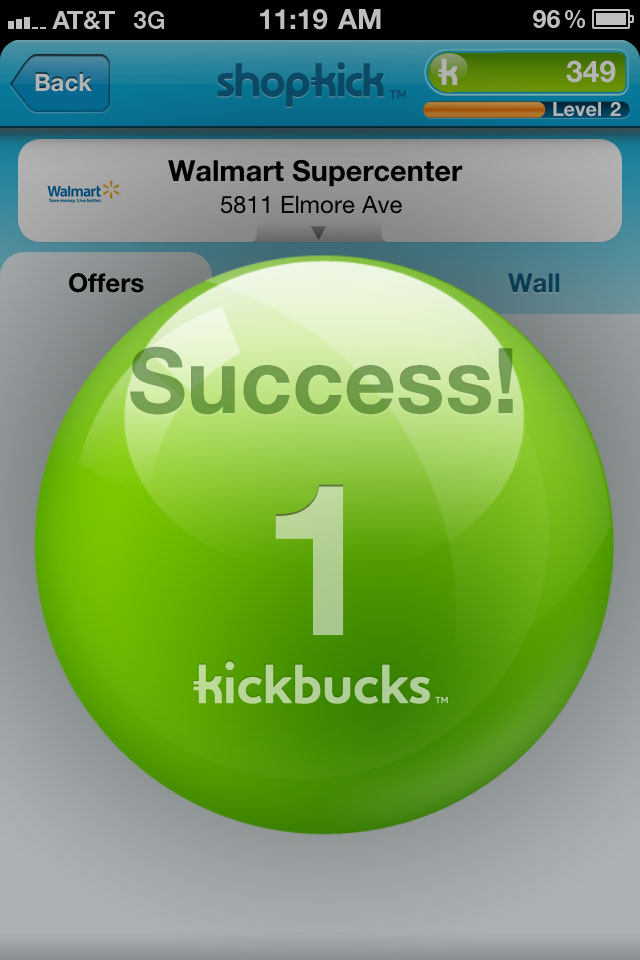 shopkick:  It’s based on the idea that consumers should be rewarded for doing more than just buying when they visit a store.  When you go to a store, you ‘check-in’.  A list of products will come up and you are awarded kickbucks (points) for scanning that product.  Scanning a specified combination of products awards you bonus kickbucks.   Ultimately, when you get enough, you can cash them in for stuff. Stuff… as in gift cards, mostly.  Nothing wrong with that, right?

Almost nothing.  I’ve spent time in the past – and again today – scanning items.  Unfortunately, it’s slim pickings.  You can’t scan just anything.  They give you a list.  At Walmart today, I had the choice of scanning four items.  Two were makeup, two were printer cartridges. None of the products that I had predetermined I wanted to scan (based on my grocery list) were available.  So my thoughts that there may be coupons or promotions attached that I would discover via shopkick were dashed.  That’s not what the app is for. 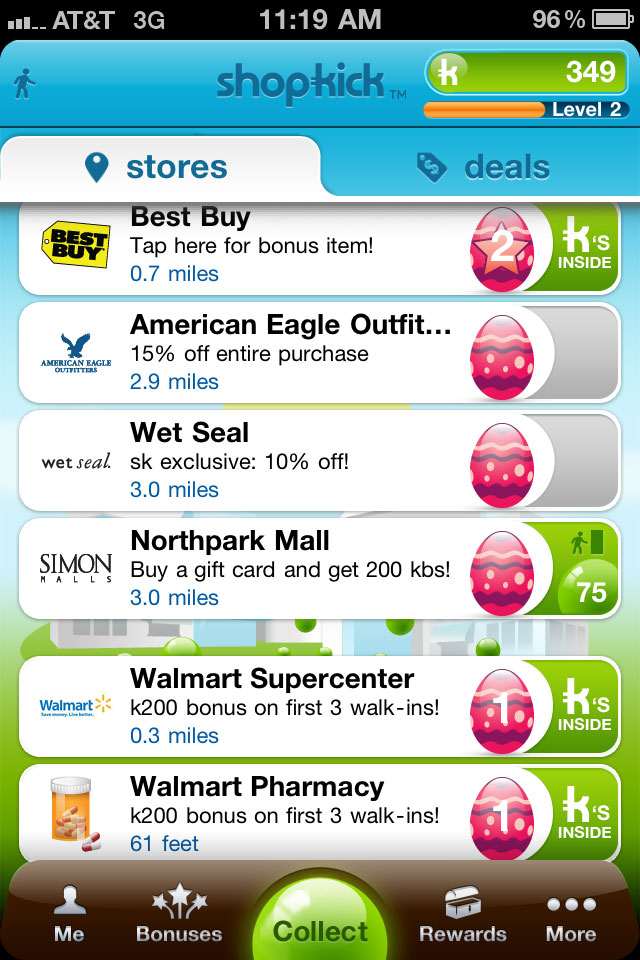 Honestly, this app isn’t designed for social media influencers to add content or utilize from an information push perspective.  It’s not that type of program.  It’s intended for the end-user who retrieves data. Someone who has time to devote to a scavenger hunt to earn gift cards.  If you’re a mom with kids in tow – or on a tight deadline between kid-related events, then this probably isn’t for you.  Sure, you can download it, check-in and see if there are products that interest you.  But setting aside time specifically to go scan isn’t the best use of a busy-person’s time.  How do I know?  Because I tried it several months ago and and was frustrated in no time.  I wasn’t in Walmart for a scavenger hunt.  I was there to get my stuff, maybe browse things that caught my eye and get out.

What is the benefit to the retailer or the brand?  Beats me.  Sorry but I just don’t see it.  If I want to research a product and I have to scan it through this type of program, then it isn’t going to give me the information I’m looking for anyhow (reviews, comparable prices, etc.). I’m more likely to load up a traditional barcode reader app like RedLaser, PriceCheck or Bakado and scan using that. 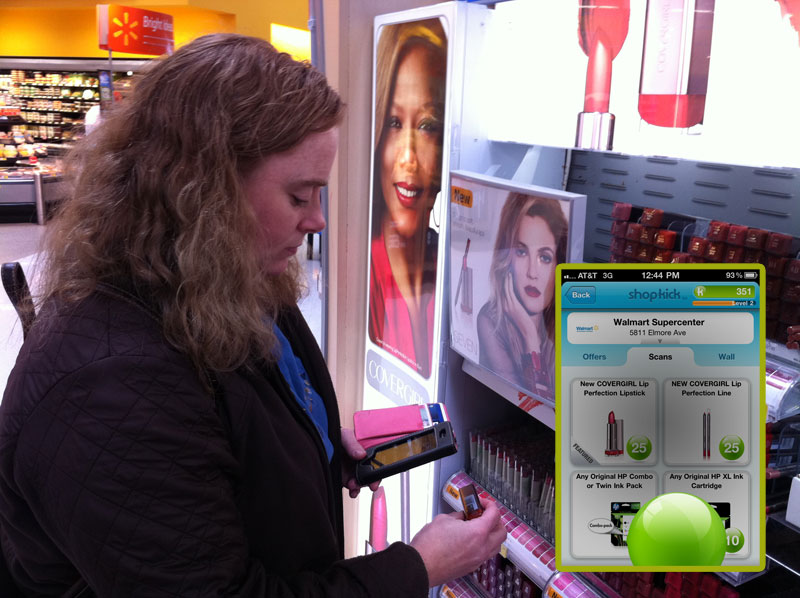 So in an effort to ‘get’ the benefits of shopkick, I decided to go ahead and scan one of the products they had listed.  It launched a page that let me select which of the product lines I wanted more information on.  Did I care?  No.  I’m more interested in finding coupons and good deals.  Yes, there are some discounts available in the “Deals” tab (that don’t require scanning) but unless the app loads a coupon and super discount as a thank you for scanning the product, then it isn’t for me.

So what about the other application? Would it be more effective for me? 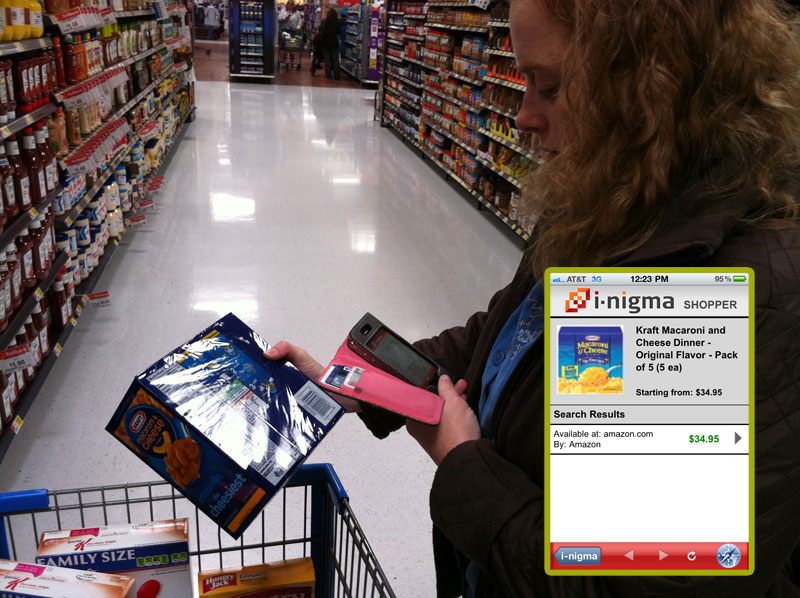 I-Nigma:  It’s a scanner.  You know, find the bar code, beep, launch a browser with information.  While at the store, I attempted to scan the previous mentioned items (Ketchup, Mac ‘n Cheese, Boetje’s Mustard) and of the three, only one garnered a response.  The Kraft Mac ‘n Cheese loaded and showed how much it would cost if I wanted to purchase it in bulk from Amazon.

This was the first time I had tried using I-Nigma for scanning bar codes.  But that doesn’t mean I’m new to it.  It’s my favorite app for scanning QR Codes.  It’s lightening fast and maintains a history.  It also allows you to choose between the I-Nigma browser or a default browser.  I tried both and opted for the I-Nigma because it keeps the app open and makes it easy to scan another item quickly.

While I adore this as a QR Code reader, when it came to scanning bar codes, it didn’t work as well as some of the other apps that I’ve used for that function.  I was hoping it would give details, prices, reviews, recipes.  It didn’t launch as much information – at least not for the everyday things that I was checking on.  Maybe if I had used it to scan something else whether electronics, hardware or toys, it might have given better results.

Ideally, I would love an app that provides price comparisons to other stores, reviews and opinions that I can gain access to while in the store.  In addition, it would be great to scan an item in my cabinet and find helpful recipes to put it to use.  You know… that can of (whatever) that you forgot about and now need to use before it expires.

While neither of these apps are something I would use for scanning barcodes for productivity, they do have their benefits.  If you have time to kill and want to earn some rewards or gift cards, then shopkick is something worth considering.  Far more entertaining than sitting at the computer taking online surveys.  And I-Nigma… like I said, it’s my favorite for QR Code reading.  Whether in a newspaper or magazine, on advertising brochures, inside a museum or attached to a product, it’s the app I would load for the quickest response.

There are tons of applications available for all different purposes… but neither of these fit the bill for scanning things at the grocery store.  Just because there’s an app doesn’t mean it’s going to do what you want.

3 comments on «Just Because There’s an App…»