One nice thing about moving back to Iowa is that we have basements here.  Bad thing – most of them are unfinished.  My uncle ‘finished’ a room in their basement for when his grand kids are over.  I’m using the word “finished” rather loosely because his put drywall up.  Period.  The first time we visited with our kids, I gave my girls the normal chat about behaving when you’re a guest in someone else’s house.  I was quickly corrected and told that their playroom is designated as a “no rules” room.  As in – anything is fair game in that room, including writing on the walls.  He’s a contractor so when the drywall gets too damaged, he puts up new sheets.  What a concept – a “no rules” room. 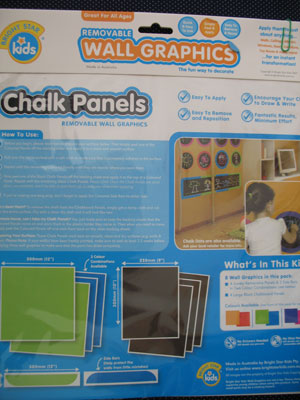 Our winter goal was to remodel the basement so that our kids have a place to play as well as a safe place for when friends are over.  While I’m not as adventurous as my uncle with the “no rules” room, I did think the idea of writing on the walls was kind of cool.  When I was told about a review opportunity from Bright Star Kids, I was immediately drawn to the chalkboard wall dots and panels. I put in my order for a set of the wall panels and figured since they were coming from Australia that it would be a while before they arrived. By then, maybe we would have finally gotten around to working on the basement.

Well, I was wrong on a few points: First, I didn’t get around to decluttering the basement enough to be able to start the remodel. Second, and here’s the clincher, I had my order within a week. I was totally shocked. My shipment came from the other side of the earth and it made it here faster than most orders get here from across the country.

So I opened my package and decided to play with it a bit before figuring out plan B on where I was going to put it. There are 10 pieces in my package. Two each of two different colors of back panel along with four chalkboard pieces. In addition, there are two end pieces in case you decide to make one large panel instead of smaller ones. 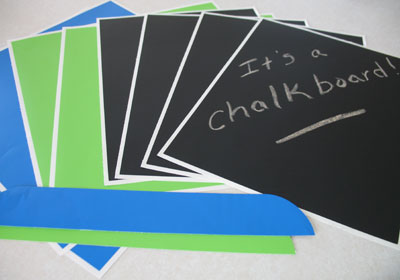 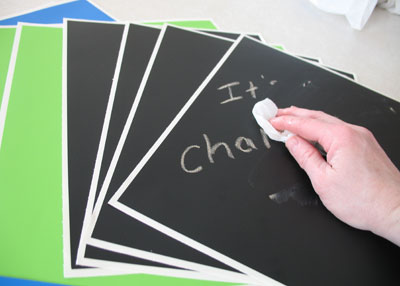 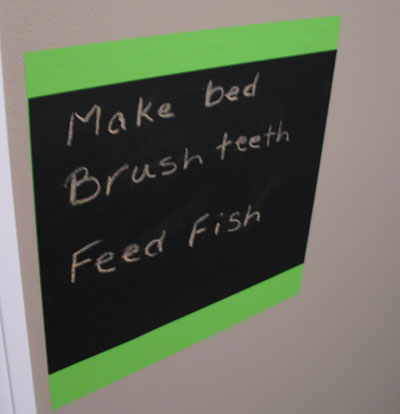 The panels are removable and reusable so I decided to put them to use in a temporary location until the basement is finally finished. Here’s a picture of the one that’s in the girls’ bathroom – the To Do list of the three things I expect from them each morning.

The panels work like regular chalkboards and clean easily with a damp cloth followed by a dry one.  My only complaint is that simply by the nature of what they are, chalkboard panels, they don’t have anything to catch chalk dust.  I guess if they’re in a designated play area where they are being used like a regular chalk board, you just plan on vacuuming underneath them.Regardless, I think they’re pretty cool and a fun wall feature that is not permanently affixed.  Bright Star Kids has several other themes of wall graphics for people who are creatively decorating a child’s room.  In addition, they have various other labeling options.

If you’re in the market for some new decorating pieces, drop by Bright Star Kids to see what they have.  Don’t let their location be a deterrent either!

Already the proud owner of some Bright Star wall graphics?  Why not enter their Photo Competition for a chance to win a Wall Graphics kit of your choice or a $50AUD Gift Voucher!