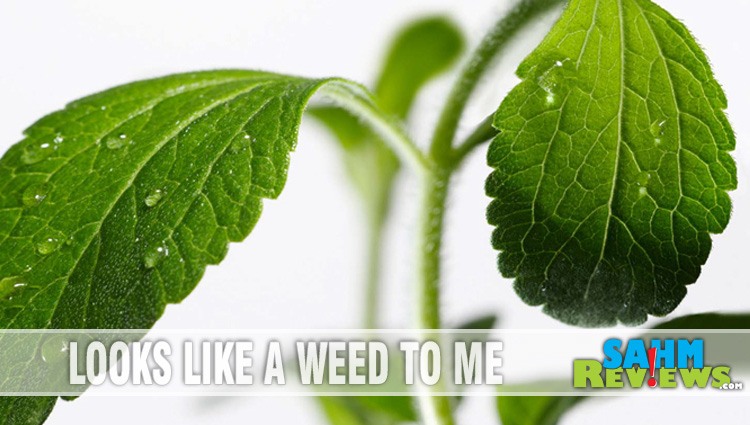 Shortly after moving back to the Midwest, I was invited to a luncheon at a neighbor’s house.  She’s a nurse and had the nicest spread of healthy foods – all of it delicious.  Chicken salad on whole wheat pitas with sprouts instead of lettuce.  Fruit and other finger foods, too.  But of all the things she served that day, the one that stuck most in my head was a product I had never heard of before.  She called it Stevia and explained that it’s an all natural sweetener that contains fiber.  She told me it could be found at health food stores or in the health food section of nicer grocery stores.I was intrigued and it’s been in the back of my mind ever since.  When I planted my garden this past spring, I recall seeing Stevia plants at the store.  When I decided I wanted to plant one, I went back to the store and found they were gone.  The guy told me it was a fluke that I even saw one.  Apparently they flew off the shelves.

It’s a few years later and Stevia is finally making a name for itself.  When I saw the broadcast that Mom Central was doing a Truvia blog tour, I immediately replied “I haven’t heard of Truvia before, but since it’s a stevia product, count me in!”  They sent me a box of 40 packets – looking very similar to all the other packets.  Not pink.  Not blue.  Not even yellow.  These are white and green.

My mom happened to be over when I received the box and immediately said “They don’t sell that yet. I’ve been looking for it.”  Completely dumbfounded, I asked my mom if she had heard of Truvia.  (As you recall, I had never heard of this before!)  She said “I’ve been hearing it on commercials for a little while now but haven’t found it at the store yet.”  DH opened up a packet and we all tasted it.  My mom said that it’s sweeter than other products.  It was sweet, I agree.  But DH pointed out something that was more interesting.  It didn’t have an aftertaste.  It was very clean tasting.  I was surprised to see how fine it felt and looked.  Artificial sweeteners look created.  Truvia doesn’t.  That’s probably because it’s not artificial.  Best part is that it’s calorie-free.

Now I have to say that I have a total sweet tooth.  I used about the same quantity (packets) of this that I typically do of other sweeteners.  But it’s nice that it’s natural and calorie-free.  I don’t feel quite as guilty about using it.

When I was at the store, I double checked to see if our local grocery store carried it.  They have the same box of packets that I received but don’t carry it in bulk.  Not that I’m surprised – the other sweeteners entered the market the same way.  Besides, they don’t even show the product in bulk on their website!  Their website does contain several recipes using Truvia though.

So the next time you’re at a restaurant or coffee shop and see a packet that doesn’t look familiar, be sure to read it.  It is probably Truvia.  If you pick these up at the store and decide you like them, be sure to let restaurants know so they can start to stock them.