We are given many opportunities in our country, some that most people overlook as being a privilege. I cannot fathom how many people tap dance to get out of jury duty. Nor can I understand why people don’t make every effort to research elections then get to the polls to make their voice heard. As the next major election day rolls nearer (we know it’s close because every other television commercial is a political ad), we thought it would be fitting to put together a list of election-inspired board games to get in the spirit of the day. Despite the similar theme, they’re all very different types of games. Watch for ones with our

logo. Those are games we’ve shared in the past. Click on the logo and it takes you to an article offering more detail about the game. 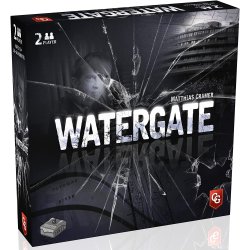 One player takes on the role of a journalist, the other embodies the Nixon Administration. To win, Nixon must build up enough momentum to ride out the term, whereas the Journalist must gather enough evidence to pin Nixon to the crime.

In this game of wits, each player will have a completely unique deck of cards to seek out victory. As you race to complete your goal, you must also contend with the other player trying to thwart your progress. 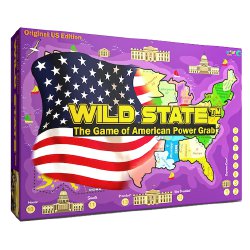 Wild State is an easy game to learn, making it ideal for teens. It literally takes seconds to show others how to play. The game is also educational by simulating real scenarios of campaigning and election cycles where even States votes on the game come close to real States Elections Electoral votes. Just like in real campaigns, there are upsets.

The Agenda Game is a small piece of political theater in a box where players can throw their hat into the political ring. But these presidential candidates aren’t competing for electoral votes – they have agendas! The board game was designed to tickle the funny bone, and teach something new about people and politics in general every time you play. 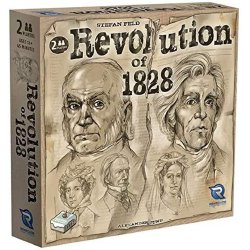 In this two-player game, you are trying to become the next President of the United States! To reach this Lofty goal, each player will try to take election tiles that suit you best and hinder your opponent’s campaign.
Election tiles allow you to garner the allegiance of elector and use the power of smear campaigns to skew the populace in your favor. If you also use the powerful campaign actions to your advantage and have the press look the other way, nothing should stand in your way! 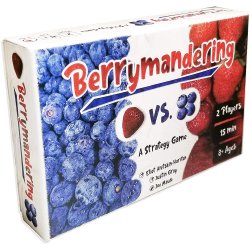 Ridiculously Fun: Are you looking for a political board game for adults and kids that’s simple, fun, and strategic? If yes, then this political tabletop game for two players will provide you with endless hours of fun that will keep you coming back for more. 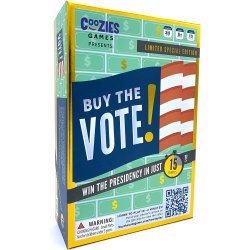 Spend millions to become President of your family or friends. Every round, state cards are revealed for candidates to campaign in. The more states you win, the more money you get to spend/advertise with. Just when you think you got it figured out, the game heats up as more states will be up for grabs and your money pile starts to grow uncontrollably. BTV! is so fast and fun, that it will be over before you know it!

Use Rally cards to build your pool of voters! While Rallying, you will gain voters at the start of each turn. Some Rally cards will even do special effects like take voters away from other candidates! 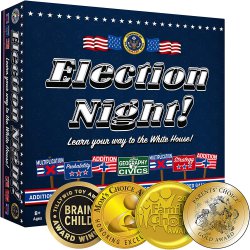 Election Night is a multiple award winning game, where two players or teams battle for critical electoral votes in a gripping race for the presidency. Use your dice pool to choose products or sums that could help you the most. Strategically target key states with freezes and re-rolls to counter your opponent’s progress. Lock down quick victories in small states or work for longer-term objectives in larger states on your way to gaining the 270 electoral votes you need to become President! 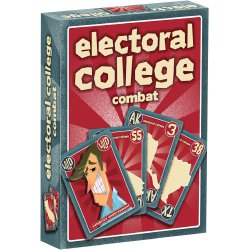 Unpredictable until the last hand, Electoral College Combat pits two players against one another as they navigate Fake News!, Russian collusion, recounts, celebrity endorsements, and swing states to win 270 Electoral College votes and the US presidency. Fast-paced fun that puts everyone in the middle of the chaos. Second prize? Hindsight and a book deal. Ghost writer available upon request. Deal with it. 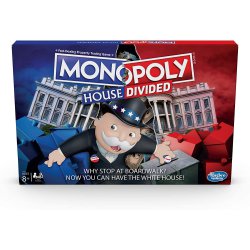 The Monopoly House Divided board game celebrates the ups and downs of an election campaign. Imagine being in the midst of it all with this exciting game for families and kids ages 8 and up. Players buy states, earn votes, and collect rent. Those lucky enough to get the White House token can double the rent they charge and add more votes at the end of the game. When all the states are claimed, the candidate with the most votes wins!

Race to the White House 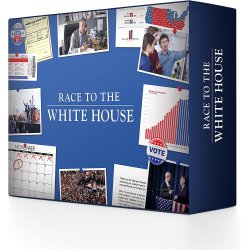 Race to the White House is a sophisticated two-player simulation of a US presidential election that puts the stars of the Republican and Democratic parties in pursuit of the country’s highest office. Its mechanics are board-and-card driven with some dice-influenced results; the game flow is controlled by action and reaction cards, dice rolling, hand management, and area influence.

With such an assortment of politically-inspired games, surely you’ll find something to interest you. Whether you get it ordered and to the table before or after the elections doesn’t matter. Just make sure you make time to get out and vote. Thanks to our freedoms, you can always play a game when you get home.

Do you research candidates before voting?