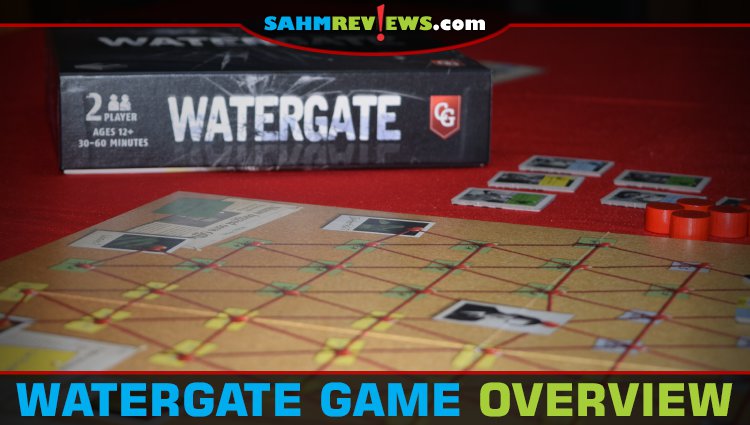 Seems like every time I turn around there is another political issue making the news. Sometimes it’s one political side embroiled in scandal and the next minute it’s the other. Social media and opinionated media outlets have turned what was once an esteemed profession into an absolute side show. Don’t think that I’m oblivious to the fact that corruption, bribery and scandal have been part of United States political process for far longer than anyone currently walking this earth. I’m fully aware. But nowadays, it seems like there’s a rush to judgement without all the facts not only for politics, but for anything. People jump to conclusions. Roll the clock back even a couple decades and things were far different. Take the Watergate scandal as an example. It’s one of the biggest scandals to rock the office of the President of the United States. Bob Woodward and Carl Bernstein did the investigative work, supported in large part by a secret informant known only as Deep Throat until his identity was revealed in 2005. Since the only time I really talk about politics on SahmReviews is when it involves a game, you’ve probably already guessed that this is leading up to an overview of Watergate, the 2-player game from Capstone Games. I guess the title of the article probably hinted at that anyhow.

Set your political opinions aside and recognize that you’re playing a game. You aren’t condoning or condemning one side or another. One person will play the part of the Nixon Administration and the other will take on the role of the Newspaper Editor. Place the research board between you, oriented toward Editor. Each player takes the 21 cards relating to their specific role. The momentum card is placed alongside the research track side of the board. Shuffle your individuals decks independently to form your own draw decks and place them next to your momentum cards. The initiative card and round overview cards are placed in the area between the team cards. One momentum token and the initiative token are added to the center of the research track. The remainder of the momentum tokens, the picture tiles and the bag of evidence tokens are set within reach of both players. 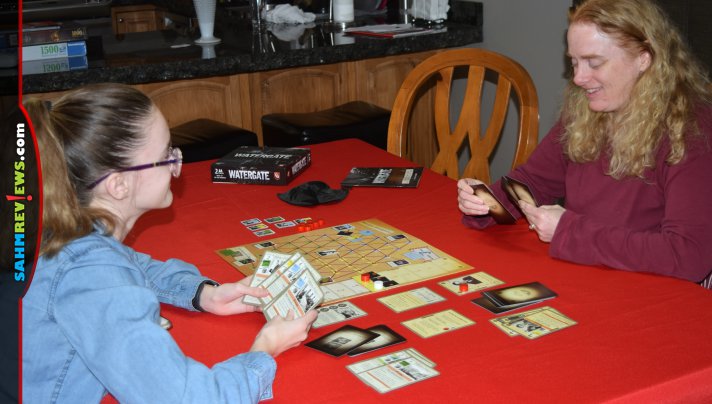 Watergate is played over a series of rounds, each consisting of three phases. There’s an initial round preparation phase, followed by a card phase and finally an evaluation phase. This process repeats until the Nixon team has placed five momentum tokens or the Editor team is able to connect two informants to Nixon’s picture on the board. Whichever completes that objective wins. 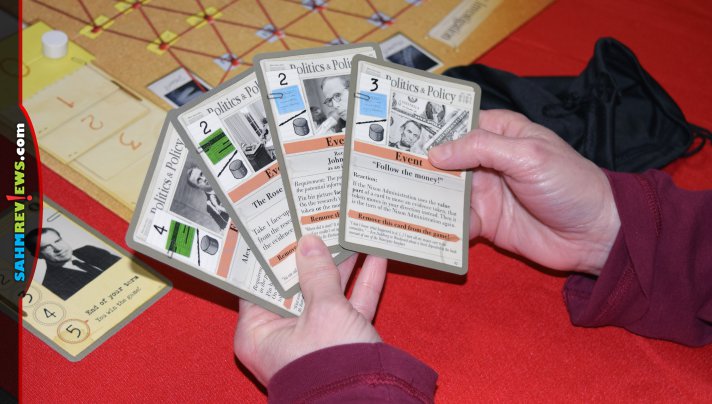 During the initial phase, both players draw cards from their respective initiative deck. These cards are added to your hand and kept secret from your opponent. Following that, the player from the Nixon team will grab three random pieces of evidence from the bag, secretly look at them then place them on the research track. During the card phase, the opposing teams will take turns playing one card from their hand at a time until neither has any left.

Each card consists of a value part and an action part. You choose one of these to implement when it’s played. When you opt for the value portion, you may move one token on the research track. The initiative, momentum and evidence tokens are all options shown on the various cards. Blue evidence tokens represent checks for Nixon’s re-election campaign. Yellow tokens are ground plans of the Watergate complex. Green ones are transcripts from the Nixon White House tapes. Any time a token is moved to space 5 on the research track, you gain that token and perform the instructions based on the token type. 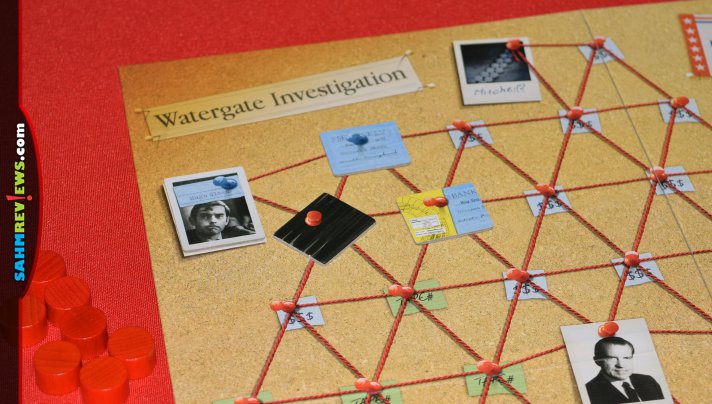 As an alternative to moving a token using the value field, you can take an action. Each card displays one of three types of actions including events, conspirators (Nixon only) and journalists (Editor only).  Follow the instructions as noted on the card including any requirements or reactions listed. These actions may involve moving tokens or drawing new evidence tokens or pinning an item to the board. 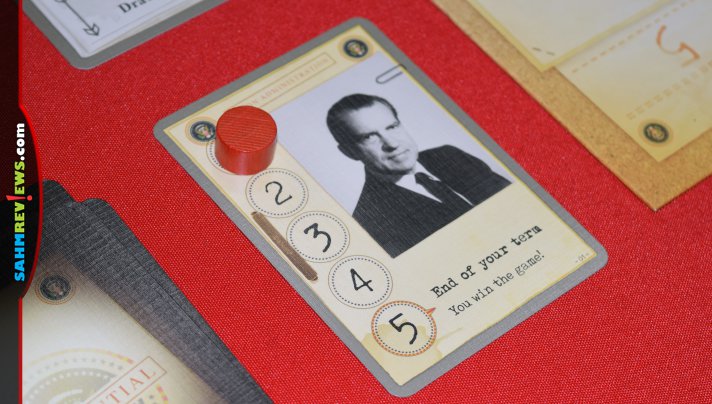 After all cards have been played and completed, you move on to the evaluation phase and complete the following three steps. Any evidence tokens on the zero space are returned to the bag. Next, award the initiative tokens based on which side of the research track it’s on followed by the round’s momentum token in the same manner. Replenish the initiative and momentum tokens from the supply. Finally, each player gains evidence tokens from their side of the research track. Evidence is pinned to the board either face up to create a connection (by the Editors) or face down to disrupt potential connections (by the Nixon team). Some will allow you to move the momentum token toward your side of the board. 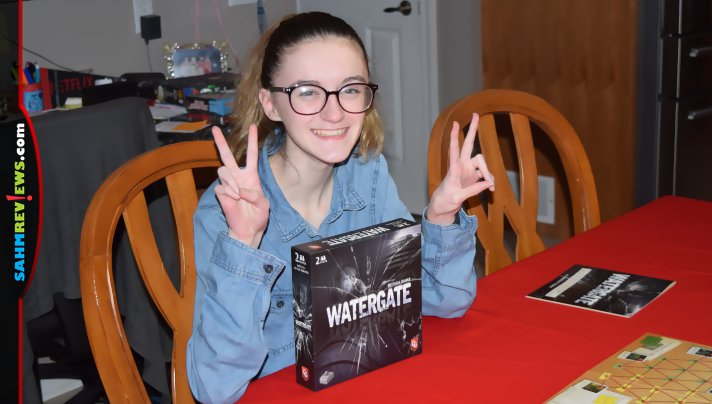 The game ends immediately once the previously mentioned criteria are met. If you’re looking to learn more about the incident, you can read all the flavor text printed on the card. It’s not relevant to game play, but explains the people and situation in more detail. Both educational and entertaining, Watergate is a nice 2-player title for your game shelf. Find copies on Capstone’s website, on Amazon or at your local game store. Investigate what other games are coming out from Capstone Games by examining the clues on Facebook and Twitter. And by all means, remember that it’s a game, not a political statement when you play!

Have you ever studied the Watergate Scandal in detail?